Beijing's tug of war with Washington now moves on to Taiwan Indeed, the joint statement contained no mention of how to verify the North's denuclearization. Trump went so far as to say he would cancel joint military exercises with South Korea. China, as Pyongyang's patron, also looked like it came out of the meeting as a "winner."

But observers may have jumped to conclusions. The battle between Washington and Beijing over influence on North Korea has already moved into its second round. And it was Trump's own words on Friday that startled the Chinese leadership.

"How are you going to celebrate Father's Day?" the president was asked in an impromptu appearance on Fox News, broadcasting live from the White House lawn.

After the Fox appearance, the president stayed on the lawn to take questions from other reporters. "I can now call him," he said of Kim. "I can now say, 'Well, we have a problem.' ... I gave him a very direct number. He can now call me if he has any difficulty."

The establishment of a "hotline" between the two leaders, however spontaneous the exchange was, will be an extremely powerful tool for Trump. It is a luxury that Chinese President Xi Jinping, who has met with Kim only twice, does not yet have.

Trump told reporters that shortly before he took office, predecessor Barack Obama had told him that the North Korean nuclear program was the biggest and most dangerous problem faced by the U.S. "I have solved that problem," Trump boasted, partly because "we signed, number one, a very good document."

And "more importantly than the document, I have a good relationship with Kim Jong Un," he said.

With the establishment of a direct phone line, the American president has indeed gotten close to Kim, perhaps overtaking Xi in terms of approaching the North's young leader.

Trump unleashed a different arrow toward Beijing that same Friday. Citing intellectual property theft, his administration announced a 25% tariff on $50 billion of Chinese imports, starting with certain goods on July 6.

"My great friendship with President Xi of China and our country's relationship with China are both very important to me," Trump said in a statement issued by the White House, before adding: "Trade between our nations, however, has been very unfair, for a very long time. This situation is no longer sustainable." 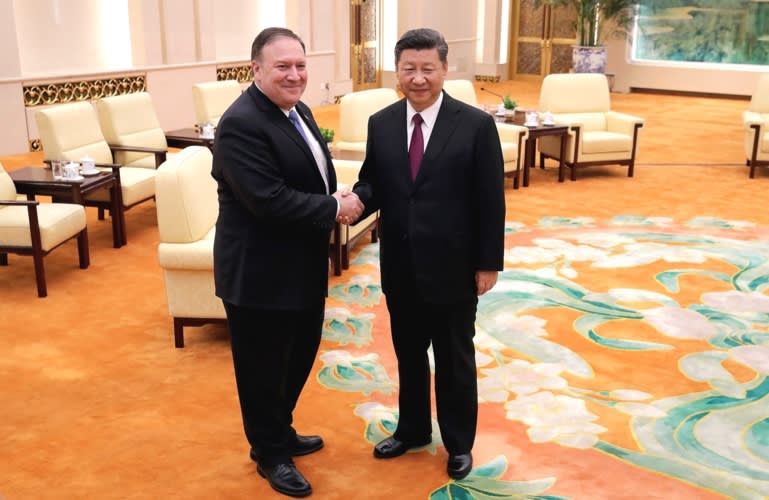 U.S. Secretary of State Mike Pompeo, left, shakes hands with Chinese President Xi Jinping at the Great Hall of the People in Beijing on June 14.   © Reuters

A day earlier, Xi was meeting U.S. Secretary of State Mike Pompeo in Beijing. The American diplomat had flown to the capitals of South Korea and China to brief their respective officials on the Singapore summit.

But for Xi, such updates were hardly necessary. China had gotten word of the entire agreement from North Korea ahead of the announcement.

It was at 1:41 p.m. that Trump and Kim had signed the joint statement in a posh Chinese restaurant on the second floor of the Capella Singapore hotel on the island of Sentosa. Shortly thereafter, a perfectly translated Chinese version was distributed widely in China.

In fact, the Chinese were reading the content of the joint statement hours before the White House press office tweeted it.

The timeline suggests that the Chinese knew the Trump-Kim summit's outline early on. This was evident in the Foreign Ministry spokesman's daily news conference on June 12. Geng Shuang proudly noted that "the China-proposed 'suspension for suspension' initiative has been materialized."

Suspension for suspension is a proposal for the U.S. to halt joint military exercises with South Korea in return for North Korea freezing its weapons program.

What was highly unconventional was that Geng's words came more than an hour before Trump disclosed in his own news conference that he had told Kim that the U.S. would stop the joint drills.

The night before the Singapore summit, Kim went out on an excursion into the city. Presumably after dinner, his motorcade left the St. Regis Hotel and headed to Marina Bay Sands, the hotel-casino-shopping complex run by top Trump donor Sheldon Adelson.

The complex's three skyscrapers are topped by a ship-shaped structure, Sands SkyPark, offering tourists a stunning view of the city 57 levels below. Kim looked out on Singapore's famed nightscape amid the camera flashes of the North Korean official photographers following him.

After strolling along the promenade, not far from the Merlion statue, Kim agreed to fit into a group selfie with his tour guide for the day, Singaporean Foreign Minister Vivian Balakrishnan. Kim's big smile indicated his comfort with the following day's summit.

By then, the joint statement had mostly been agreed to. Kim no longer had to worry about a military strike by the U.S. He had reason to relax.

His stern face the next morning upon arriving at the hotel, glasses in hand while exiting the limousine, was a calculated move, according to a diplomatic source.

"It was a show," the source said. "He wanted to contrast his nervous face at the beginning of the day to his broad smile at the end of the day to show how much had been achieved." It was to hide how everything had already been settled the day before.

North Korea informed China of what had been agreed to with the Americans leading up to the summit. This was Kim's way of repaying Xi for lending him an Air China jet to fly here on. Lending out the plane enabled Beijing to track the North Korean leader's travel schedule and the progress of the negotiations that influenced the itinerary.

For instance, Kim requested that the Air China aircraft take him back to Pyongyang a day earlier than initially planned. After coming to an agreement with the U.S. over the joint statement on June 11, Kim saw no need for a second day of negotiations with Trump.

Kim's return flight was pushed up half a day to depart on the evening of June 12. Two Air China planes arrived at Terminal 4 of Singapore's Changi Airport a little after 6 p.m. and took off for Pyongyang with Kim around 11:30.

The Boeing 747s that Xi sent for Kim are the official planes for Chinese leaders. Then-Premier Wen Jiabao used them to visit Japan in 2007 and 2011, although current Premier Li Keqiang flew on a different aircraft to Japan this May. Lending out the planes, most likely at no cost, was a worthwhile investment for Xi. He received timely updates throughout Kim's visit. At this point, the Chinese leader felt no suspicion when Kim chose not to stop in Beijing on his way back home.

Little did Xi know that Trump had given Kim his phone number and was planning for further direct communication.

A hotline between Washington and Pyongyang inevitably alters the balance of power between the U.S. and China. Trump may feel that China is no longer indispensable in negotiations with North Korea. He can talk directly. This was not on Xi's radar.

With a free hand on North Korea, Trump is expected to increase the pressure on China. Trump's first move was the tariffs announced on Friday.

More worrying for Xi is Taiwan. Taiwanese President Tsai Ing-wen, left, and Minister of National Defense Yen Teh-fa attend a drill near a naval base in Taiwan's Yilan County in April.   © Reuters

Xi's meeting with Pompeo on Thursday made clear what was on the Chinese leader's mind. The Xinhua News Agency reported that "Xi expressed his hope that the United States will handle sensitive issues, including the Taiwan issue and economic and trade frictions, in a prudent way to avoid serious obstruction to bilateral ties."

Trump had on March 16 signed the Taiwan Travel Act into law, paving the way for mutual visits by senior American and Taiwanese officials. From a legal standpoint, there is now nothing stopping Taiwanese President Tsai Ing-wen from visiting the U.S.

The signing ironically came around the time Xi was reappointed president, now under a revised constitution abolishing presidential term limits.

Xi's ambition as China's leader is to overtake the U.S. economically and bring self-governing Taiwan under its rule. If Xi pursues this aggressively, the Trump administration and Congress are expected to respond more forcefully than on the Korean Peninsula.

The push and pull between Beijing and Washington continues. Developments on the Korean Peninsula are now linked to Taiwan. The biggest winner in this geopolitical power struggle may be Kim Jong Un after all.