China taps Abe, Volvo and anything that sticks in trade war

Xi searches for better narrative to sell to the world

BEIJING -- On Aug. 22, one day before Donald Trump's administration slapped new tariffs on $16 billion worth of Chinese products, Asian journalists gathered for a forum in Beijing.

The aim of the forum was to promote President Xi Jinping's signature Belt and Road Initiative. The ambitious project to create an economic zone linking China with Europe and Africa by land and sea is now 5 years old.

In a keynote speech, Wei Jianguo, a former vice commerce minister, said the initiative was in no way designed to counter the U.S. "President Xi advocated the Belt and Road Initiative in 2013, at a time when then-U. S. President Barack Obama was taking a stance of welcoming China's rise," Wei said.

His following words were surprising. "Since last year," he added, "Japanese Prime Minister Shinzo Abe has been saying Japan wants to join the Belt and Road."

The reference is not entirely correct. In June 2017, Abe spoke at the International Conference on The Future of Asia, hosted by Nikkei. The prime minister made clear that Japan was ready to cooperate with the Chinese economic initiative, albeit conditionally. Later in the year, at the November summit of the Asia-Pacific Economic Cooperation in Danang, Vietnam, Abe proposed to Xi that Japan and China cooperate within the Belt and Road framework to build infrastructure in other nations.

What is noteworthy is that China has now started using the Japanese leader's positive stance as a main propaganda tool to pitch the Belt and Road internationally.

Furthermore, China recently explained to neighboring nations, in no uncertain terms, that the decision to bring in Japanese technology in the years after 1978 was the key to igniting China's economic success.

Since the turn of the century, candor of this kind had gone unspoken. Especially in Xi Jinping's "new era," China has focused on touting what it claims are unique technologies that the country has developed on its own.

Take high-speed rail. China's system is based on technology brought in from overseas, including from Japan's shinkansen. But China claims its latest model, the Fuxing, is unique and as such gives the country a large portfolio of intellectual property rights.

Why the subtle change in attitude? No doubt, the answer lies in Trump's tough stance on China. Japan's Shinzo Abe and China's Xi Jinping meet for the first time, in the Chinese capital in November 2014, since becoming leaders of their countries.

The Trump administration is calling for the Chinese government to retract "Made in China 2025," a long-term strategy for establishing unique technologies and thereby transforming the country from a "manufacturing giant" into a "manufacturing power."

The Trump administration says that China is trying to catch up with the U.S. through unfair means, such as the forcible transfer and theft of technologies.

At the Beijing forum for journalists, a Chinese economist lashed out at the Trump administration's stance on China and its trade protectionism. So over the top was his rage that even journalists from fellow Communist countries looked at each other and rolled their eyes.

Two important issues were conspicuously absent from the Beijing forum. One was the "Made in China 2025" initiative. The second was the Trump administration's decision to impose a second round of punitive import tariffs on Aug. 23.

During its main evening news program for Aug. 23, state-run China Central Television made no mention of the newly imposed tariffs, though the latest tit-for-tat between the U.S. and China dominated headlines around the world that day. The next morning, the front page of the People's Daily, the mouthpiece of the Chinese Communist Party, also carried no mention of the new round of tariffs.

Beijing is refraining from trumpeting its Made in China 2025 strategy both at home and abroad for fear of provoking the Trump administration.

But the Belt and Road initiative is another matter as it is related to the very foundation of China's external policies in "Xi Jinping's new era," which has just begun. China is steadily taking steps at home and abroad to promote the economic initiative. 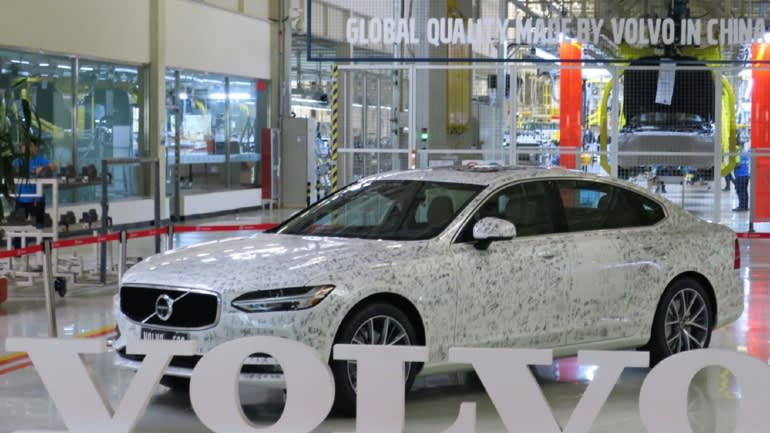 Daqing, a city in the northeastern province of Heilongjiang, has taken a symbolic step in this direction.

Daqing is famous for its oil fields, which began production in 1960 as part of leader Mao Zedong's "self reliance" policy. But the wells no longer produce like they used to.

No matter, the city has one replacement for the oil industry -- a Volvo Cars assembly plant.

Last year, the first batch of S90 premium sedans built at Volvo's Daqing plant arrived in Belgium by train. Special container trains that transport Volvo cars from China to Europe make a return trip after being loaded with parts that the Daqing plant will turn into more Volvos.

Rail transport is more costly than maritime shipping but speedier.

Belgium is a Belt and Road terminus of sorts. The export of made-in-Daqing Volvos to Europe could not fit China's vision of the initiative any better. Xi gets over the summertime blues

When Xi toured Europe in the spring of 2014 on the occasion of the Nuclear Security Summit in the Netherlands, he stopped by Volvo's plant in Belgium. Li Shufu, the top official at Geely, Volvo Cars' parent company, showed Xi around.

Xi served as the top official of Zhejiang, where Geely is headquartered, between 2002 and 2007. Li has been a close ally since those days.

This February, Geely became the top shareholder of another global carmaker, Daimler, the home of Mercedes-Benz. The purchase of a nearly 10% stake in the auto giant has left German authorities rattled.

Geely's use of the Trans-Siberian Railway to tap into the European market is a showpiece the Xi administration can use to promote the Belt and Road at home and abroad. Vice Premier Hu Chunhua has been in the news frequently lately, signaling his increased role in the trade war. (Photo by Akira Kodaka)

In the trade tussle with Washington, Xi is using whatever tools are at his disposal. On top of archrival Japan and Scandinavian born Volvo, Xi is also using a key member of a rival faction, Vice Premier Hu Chunhua.

Judging from Chinese media reports, Hu, who is in charge of economic affairs, has been pushed to the front line of the trade war. Previously, Hu had been forced to keep a low profile, yielding the spotlight to Xi aide Liu He, another vice premier. But Xi looks to be tweaking his trade team.

Hu belongs to the faction comprised of former members of the Communist Youth League, a massive youth organization of the Chinese Communist Party.

The tide changed for Hu in early August when he made a public appearance at the seaside resort of Beidaihe in Hebei Province, where retired party elders and incumbent leaders gather every summer for a hush-hush meeting. Hu also visited Northeast China on Aug. 20-21 in the name of dealing with external trade issues.

In Dalian, the Liaoning port city that once touted itself as the "Hong Kong of the North," Hu visited the commodity futures market, the only such market in China to handle soybeans and soybean meal. Hu's visit showed he was keeping a close watch over the Sino-U. S. trade war.

While in Dalian, Hu met with Yury Trutnev, a Russian deputy prime minister in charge of the Far Eastern Federal District.

Xi has no choice but to brace for a protracted fight with the U.S. Therefore, he must cope by mobilizing all useful personnel, including officials who do not belong to his faction within the Chinese Communist Party.