Chinese President Xi Jinping and containers stacked at Yangshan Deepwater Port in Shanghai: China's growth model will be at risk if manufacturers relocate to other countries to be less China-dependent. (Nikkei Montage/Source photo by Reuters/Getty Images)
Most read in 2020

TOKYO -- Amid the coronavirus pandemic, Japanese Prime Minister Shinzo Abe has proposed building an economy that is less dependent on one country, China, so that the nation can better avoid supply chain disruptions.

The call touched off a heated debate in the Chinese political world.

In Zhongnanhai, the area in central Beijing where leaders of the Chinese Communist Party and the state government have their offices, "there are now serious concerns over foreign companies withdrawing from China," a Chinese economic source said. "What has particularly been talked about is the clause in Japan's emergency economic package that encourages (and funds) the re-establishment of supply chains."

Had the pandemic not struck, Chinese President Xi Jinping's maiden state visit to Japan would have been wrapped up by now with Xi proudly declaring a "new era" of Sino-Japanese relations. He would have cheered on Abe as Japan prepared for the next big event, the 2020 Olympics.

Instead, both Xi's trip and the Tokyo Olympics have been postponed, and Sino-Japanese relations find themselves at a crossroads. Japanese Prime Minister Shinzo Abe was clear about the direction he wants Japanese manufacturers to take -- away from an over-reliance on China. (Photo by Uichiro Kasai)

Signals of Abe's new policy were visible as early as March 5.

Japan had finally been able to put the Diamond Princess cruise ship disaster behind it but was still snowed under by the challenge of preventing the virus's further spread.

On that date, coincidentally the same day the postponement of Xi's Japan visit was announced, the Japanese government held a meeting of the Council on Investments for the Future. Abe, who chairs the council, said he wanted high value-added product manufacturing bases to come home to Japan.

At the table were influential business leaders such as Hiroaki Nakanishi, chairman of the Japan Business Federation, the country's biggest business lobby better known as Keidanren.

"Due to the coronavirus, fewer products are coming from China to Japan," Abe said. "People are worried about our supply chains."

Of the products that rely heavily on a single country for manufacturing, "we should try to relocate high added value items to Japan," the leader said. "And for everything else, we should diversify to countries like those in ASEAN." 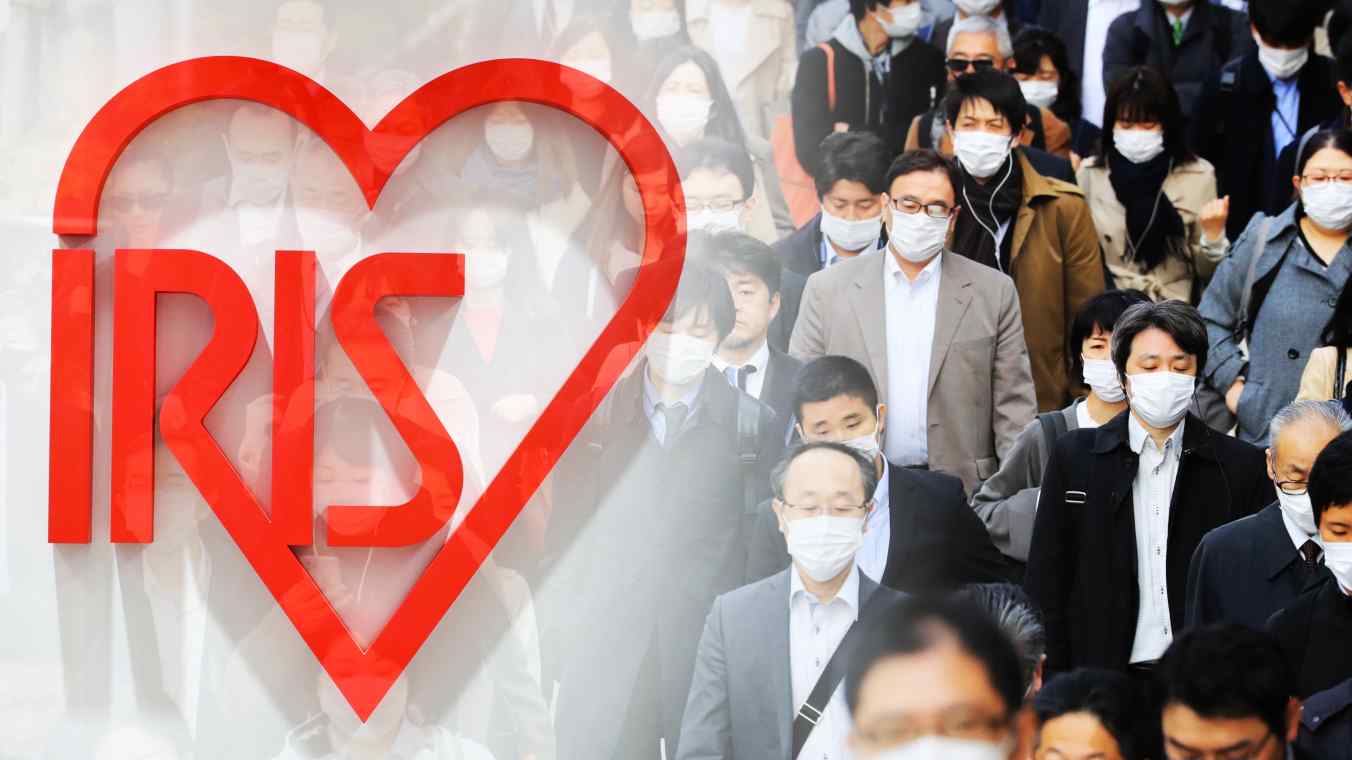 Abe's remarks were clear. They came as disruptions hit the procurement of auto parts and other products for which Japan relies on China, seriously impacting corporate Japan's activities.

And they asked for something more than the traditional "China plus one" concept, in which companies add a non-China location to diversify production.

Abe was forming a "shift away from China" policy.

With the nation transfixed by coronavirus coverage, the proposal failed to generate big headlines in Japan.

But China was watching carefully, perhaps wondering whether it was about to undergo an industrial hollowing-out like Japan once experienced.

Such a trend would shake the foundation of China's long-standing growth model.

In its emergency economic package adopted on April 7, the Japanese government called for the re-establishment of supply chains that have been hit by the virus's proliferation. It earmarked more than 240 billion yen (about $2.2 billion) in its supplementary budget plan for fiscal 2020 to assist domestic companies to move production back home or to diversify their production bases into Southeast Asia. It is a tidy sum of money. 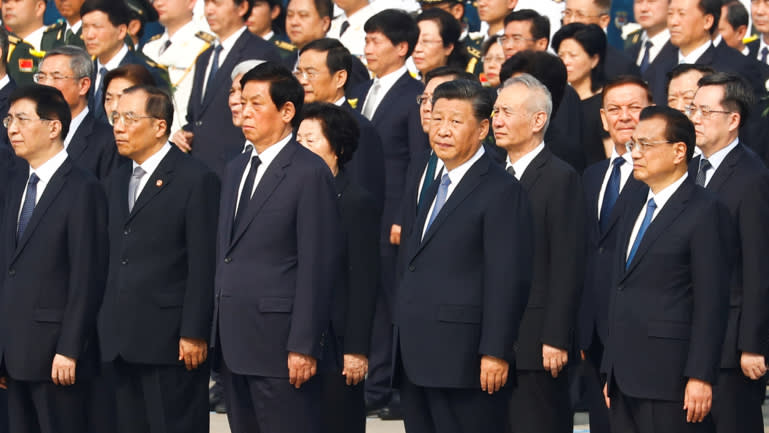 Speaking at the meeting, President Xi said that "as the pandemic continues its global spread, the world economy faces a mounting downside risk." He added, "Unstable and uncertain factors are notably increasing."

Xi, who doubles as the party's general secretary, stressed the need to stick to "bottom-line thinking" -- which means assuming the worst -- and called for "preparedness in mind and work to cope with prolonged external environment changes."

The seven-member Politburo Standing Committee usually meets once a week, and it is rare for the holding and content of these meetings to be reported.

Xi sounded the call to prepare for "a protracted battle" while assuming the worst.

There are talks in the U.S. regarding China dependency. U.S. President Donald Trump and Japanese Prime Minister Shinzo Abe appear to be on the same page when it comes supply chains in China, much to Chinese President Xi Jinping's chagrin.   © Kyodo

One topic has now set tongues wagging in the world of Chinese intellectuals. According to the Chinese astrology chart, 2020 is the year of Geng-Zi, or the metal rat, which comes once every 60 years.

It is said that every time the year of the metal rat rolls around a big history-shaking incident takes place.

In 1840, during the Qing dynasty, the Opium War broke out, leading to China's stagnation for more than a century.

Sixty years later, in 1900, toward the end of the Qing dynasty, forces from an alliance of eight nations -- the U.K., U.S., Germany, France, Italy, Russia, Japan and Austria-Hungary -- moved from Tianjin to Beijing, an incident triggered by the Boxer Rebellion, which had started in 1899.

"55 Days at Peking" is an American film starring Charlton Heston and depicting the siege of the foreign legations' compounds in Peking, now known as Beijing, during the Boxer Rebellion.

The metal rat's next return, in 1960, coincided with a famine caused by the Great Leap Forward led by Mao Zedong, the founding father of "a new China," or the People's Republic of China.

Yang Jisheng, a former journalist for Xinhua News Agency who lost his foster father to the famine, later authored "Tombstone," a detailed reportage about the epic disaster.

Based on field work and interviews, Yang revealed that as many as 36 million people died of hunger during the Great Leap Forward, far more than China once announced.

What will this year's metal rat jinx be like for China?

The peak of China's coronavirus outbreak has passed. But Zhang Wenhong, the head of a coronavirus clinical expert team whose profile has been on the rise, has said a second round of infections will hit in November or later.

During the 1918-1920 Spanish flu pandemic, the second wave of infections was more serious than the first. No pandemic has been more deadly since then. Estimates are that 500 million people, a third of the planet's population, were infected and that 50 million died.

Zhong Nanshan, an 83-year-old medical doctor, has shined since 2003, when he played a major role in the fight against severe acute respiratory syndrome, or SARS.

The new coronavirus has already mutated, and its death rate has reached levels up to 20 times higher than that for influenza, Zhong has warned.

The new virus emerged in China late last year and then spread globally. China's crackdown on information and social media posts regarding the outbreak through mid-January and its delayed initial response to the public health crisis ended up contributing to a catastrophe and sparking an international uproar.

Trump had been calling the coronavirus "the Chinese virus," although he has since stopped doing so.

Global public opinion will greatly affect the re-establishment of a post-virus world order. As things stand now, those moving to take the initiative are the U.S. and China.

In ancient China, bamboo strips were the main canvas for documents before the introduction of paper. They were called "green logs" because bamboo strips are green before they are cured and sewn into books.

Bamboo strips are official documents that are kept for posterity, and it was important for an emperor to inscribe his name on them.

If the scourge of the coronavirus were to drastically change the world order in the 21st century, will it be the U.S. or China that inscribes the bamboo strips? China cannot afford to lose.

Much will depend on how the U.S. and China rebuild their respective virus-hit economies. If major foreign companies withdraw from China, it will become a big drag on the Middle Kingdom's economic revival.