TOKYO -- One year and eight months since its last key meeting, the top echelon of the Chinese Communist Party descended on Beijing for a four-day gathering through Oct. 31.

Despite immense speculation, the 19th Central Committee's fourth plenary session came and went with no bombshell announcement in terms of new policy or personnel promotions.

What caught the eye of China watchers around the world were remarks by Chinese President Xi Jinping on Saturday, after the plenary session had ended. Appearing in Shanghai and mingling with residents, Xi said, "China's people's democracy is a type of whole-process democracy."

It was the first time for Xi to make such a remark. Speaking at a meeting to solicit opinions about the drafting of a law, the Chinese leader referred to "democracy" as many as four times during his short speech.

Chinese media outlets carried the phrase "whole-process democracy" en masse. The words immediately sparked a torrent of speculation over how they should be interpreted.

The debate spread not only in China but also abroad.

Needless to say, Xi's "democracy" is something other than free Western democracies, where governing parties elected through elections form governments and implement policies. If voters are dissatisfied, they can topple a government in the next election. 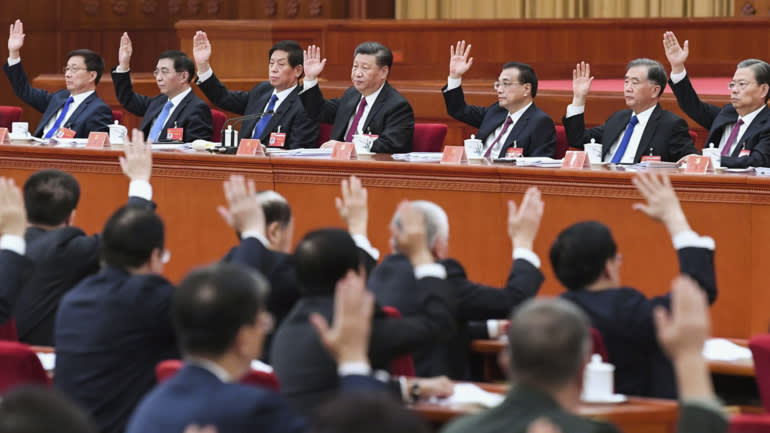 But such a system does not exist in China. The general public has no national political right they can exercise through democratic elections.

Then, what does the phrase "whole-process democracy" mean?

According to Xi's own explanation, all major legislative decisions in China will be made "after going through procedures and democratic deliberations to make sure the decision-making is sound and democratic."

This means that despite the lack of fair elections, policy decisions by the Chinese Communist Party will be made through a system that is completely democratic in a Chinese sense.

Thirty years after the fall of the Berlin Wall, China, one of the world's very few surviving socialist countries, is asserting the superiority of its unique system.

This left no room for "democracy" to come to the fore in China, even if it was limited to the party.

It was all to strengthen top-down decision-making. These efforts -- coupled with Xi's signature anti-corruption campaign, a drive that snared the president's political foes -- succeeded. The result is a situation where Xi's power is said to be unrivaled.

Xi, however, looks to be subtly changing his tone. One Chinese scholar said that Xi is attempting to change his regime's authoritarian and dictatorial image.

If this is the case, it could mean that Xi is giving consideration, albeit fleetingly, to the marginal voices in the party that criticize the current state of politics, where Xi has the final word on everything.

The timing of Xi's words -- shortly after the closing of the first party plenary in 20 months -- gives them a political meaning.

Another source offered a different but noteworthy interpretation. "Although he choreographed his talk as if he were speaking to Shanghai citizens, it was also a message with an eye on U.S. relations, at a time when trade talks are at a crucial stage." Images of Xi Jinping were everywhere inside the media center of the China International Import Expo, a showcase of China's enormous purchasing power.   © Kyodo

There is circumstantial evidence for this.

Xi's interaction with Shanghai residents took place in Changning District, not so far away from Shanghai Hongqiao International Airport. Many businesspeople from the U.S., Japan and other nations reside there.

In its report on Xi's visit to Changning, Ta Kung Pao, a pro-China Hong Kong newspaper, noted that the district is where "residents who have come from more than 50 countries and Chinese citizens live." The international flavor of the visit was clear.

Xi was in Shanghai to attend the China International Import Expo, which opened on Tuesday. The first expo was held last November in an attempt to reduce trade friction between China and the U.S. The idea was to showcase China's huge purchasing power to lure foreign investment, including from U.S. companies, and thereby boost an increasingly stagnant economy.

This year, the U.S. government did not send a high-level official, disappointing the Chinese side.

Still, China did not forget to trumpet the expo internationally. Xi's repeated reference to "democracy" while speaking in a metropolitan Shanghai neighborhood was itself a message to foreign countries, including the U.S.

Behind the U.S.'s rising criticism of China is the surprise revision of the Chinese constitution in March 2018, which paved the way for Xi to remain "president for life." The revision dashed any remaining American hopes that China might democratize.

According to Xi's new explanation, even that move followed a decision-making system that was democratic throughout the whole process. Meanwhile, China has come under increased scrutiny from the U.S. In a lecture at the end of October, U.S. Secretary of State Mike Pompeo lashed out, saying the Chinese Communist Party "is a Marxist-Leninist party focused on a struggle and international domination."

The top U.S. diplomat also signaled a strong sense of vigilance, saying China wants "international domination" and has embarked on a "global campaign" to sway foreign countries to its side.

On Nov. 5, addressing the Shanghai expo's opening ceremony, Xi stressed that China is opening up to the rest of the world.

Is his new "whole-process democracy" term also part of an effort to bring trade negotiations to a soft landing and to improve bilateral relations?

Or does it reflect Xi's ambitions to export the "Chinese model" to the rest of the world by stressing the benefits of the Chinese-style "democratic" system? It is still unclear.

A summit of the Asia-Pacific Economic Cooperation forum scheduled for mid-November in Chile was abruptly canceled due to massive demonstrations that have hit the South American country. This means that if the U.S. and China reach a partial resolution to their trade war, they will have to find another venue for Xi and U.S. President Donald Trump to sign such a deal.

If the two presidents do meet, Xi's real intentions behind "whole process democracy" should become clear, along with the true take-aways from the fourth plenary session.