Hong Kong citizen Li Ka-shing offered some cryptic advice without saying who the advice was for, though he also appeared to be comparing President Xi Jinping to a tyrannical empress who maneuvered her sons to early deaths. (Nikkei montage/Getty Images, Reuters, AP photos)
China up close

TOKYO -- The biggest surprise of the massive demonstrations held in Hong Kong on Sunday was the lack of violent clashes between demonstrators and police.

Victoria Park, the designated area for the protest, could not contain the 1.7 million people, as estimated by organizers, who showed up. So when marchers spilled out of the park and continued their protest, they did so without authorization and, in the eyes of Hong Kong authorities, illegally.

But unlike at previous weekend protests, the police did not rough them up. No tear gas, no rubber bullets.

And while across the bay, troops from the People's Armed Police have been pouring into Shenzhen, Guangdong Province, clearly threatening a military intervention in Hong Kong, at this phase, Beijing is urging Hong Kong police not to provoke the protesters.

An episode that unfolded two days before Sunday's rally holds a key to solving the mystery of this strange stasis. The protagonist is Li Ka-shing, the legendary 91-year-old business tycoon and one of the world's richest men.

On Aug. 16, Li made clear for the first time his stance on the Hong Kong demonstrations, a movement that began in June to protest an extradition bill that would allow suspects to be extradited to the mainland. He did so with sophistication.

Li ran full-page advertisements on the front pages of major Hong Kong newspapers and signed them "by a Hong Kong citizen, Li Ka-shing." In the ads, he called for an end to violence. But he did not specify who should not use violence against whom, leaving it to readers' imaginations. He was deliberately ambiguous.

"A Hong Kong citizen" took out this newspaper ad that days later still had readers parsing it out for cryptic messages. (Photo by Nikki Sun)

Was he referring to student and other protesters dressed in black shirts who forced the cancellation of more than 100 flights at Hong Kong International Airport?

Was he referring to Hong Kong police, who inflicted injuries on protesters by firing rubber bullets at and brandishing truncheons against them, and to top Hong Kong leader Carrie Lam?

Was he referring to shadowy gangs of men dressed in white shirts and armed with batons who attacked demonstration participants at a railway station?

Was he referring to the Chinese government, which is threatening to intervene in Hong Kong's political crisis by mobilizing troops from the People's Liberation Army stationed there or the Armed Police troops massed in Shenzhen?

Or, was he referring to President Xi?

Li amassed a vast fortune while Communist China pushed ahead with its "reform and opening-up" policy. A message issued by such a billionaire is significant.

What is particularly interesting is a line from a well-known Tang dynasty poem about melons that Li quoted in his ads, one of which ran in Ta Kung Pao, which clearly takes a pro-China stance.

The line is: "The melon of Huangtai cannot endure further picking." It is a warning that if too many melons are picked from one vine, the vine eventually will die. It is a poem that describes the brutality of Empress Wu Zetian, the only female emperor in China's history, who reigned from 690 to 705.

Wu Zetian had crown princes, her sons, killed one after another. Crown Prince Li Xian, who was forced to kill himself by his powerful mother, wrote the poem in question as a subtle protest immediately before his death.

This is not the first time Li has borrowed Li Xian's metaphor. He also did so in 2016 when major clashes broke out between Hong Kong citizens and police over a crackdown on illegal food stalls in the Mong Kok district.

Li did not bother to explain who was picking melons in 2016, either.

This time, given that Li's ads ran shortly after the Armed Police troops conducted an anti-riot drill in Shenzhen, and keeping in mind the Hong Kong unrest, the identity of the mystery melon picker naturally emerges.

As a matter of form, Li called for an end to violence. But he also turned his eyes to China's leadership.

Li's cultivated method leads readers familiar with Chinese classics to wonder if his cryptic advice was aimed at Xi.

Given the parent-child relationship between Wu Zetian and Li Xian, one can surmise that Li Ka-shing regards China and Hong Kong as family. But if Li was actually comparing Xi to Wu Zetian, who history remembers as a tyrant, then his ads take on a disturbing undertone.

Meanwhile, Li gave maximum consideration to avoid being branded by Hong Kong citizens as a person who is biased toward the Hong Kong government, the Chinese Communist Party or the Chinese government. There is a reason for this. The survey results show that a majority of Hong Kong citizens see police as performing a key role in violent clashes. Under the circumstances, Li had to give consideration to the feelings of ordinary Hong Kongers who remain strongly sympathetic to demonstrators.

That's why Li took out one-size-fits-all ads that all sides could accept. The wording was impeccable.

Pro-China newspapers in Hong Kong, which are under the strong influence of the Chinese government, normally would have had the option to press Li to modify his ads and clarify his position. But they did not.

In stark contrast with Li, actor Jackie Chan showed the flag without straddling the fence.

On Aug. 15, the day before Li's ads were published, the Hong Kong movie star appeared on state-run Central China Television advocating patriotism and the protection of the Chinese national flag.

Chan, who concurrently serves as a member of the Chinese People's Political Consultative Conference, China's top political advisory body, expressed his support for Hong Kong police, the Chinese Communist Party and the Chinese government. While Chan's words were explicit, they paled in comparison to the thoughtful use of Chinese characters and the poem by the billionaire businessman.

Li and Chan have at least one thing in common. They have both benefited significantly from China's economic development.

Perhaps they share something else. "They have both been pressured [by the Chinese government and others] to express their views in some way amid the Hong Kong crisis," a Communist Party source said.

In this harsh reality, one that all Hong Kongers face, Li outperformed Chan. 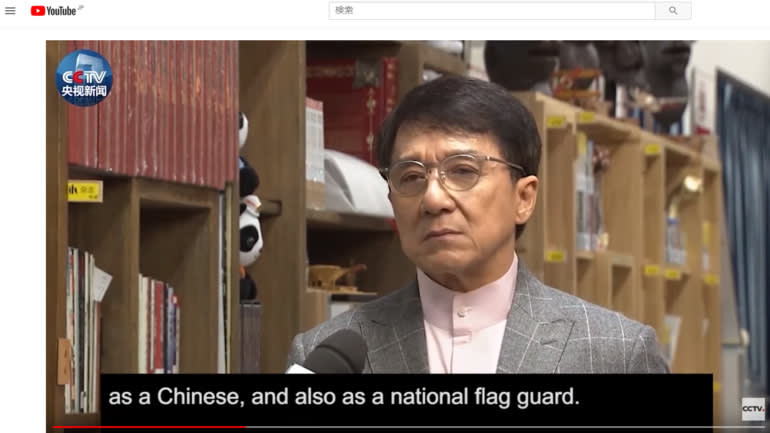 It remains to be seen how long the current standoff among demonstrators, Hong Kong police and Armed Police troops will last.

Pro-democracy forces in Hong Kong plan to hold another mass rally on Aug. 31. Citizens are demanding the complete withdrawal of the extradition bill, a probe into alleged police brutality and a truly democratic election for Hong Kong's top leader.

There is a possibility that the demonstration turns out to be the largest and tops 2 million attendees. Clashes with police are another possibility.

President Xi, who doubles as the Chinese Communist Party chief, disappeared from the public eye in early August due to the annual conclave of party elders and current leaders at the seaside resort of Beidaihe, Hebei Province.

On Aug. 19, Xi made a surprise public appearance at the Mogao Caves, a Unesco World Heritage site in Dunhuang, Gansu Province. He sported a tan and seemed to have lost some weight.

During his Beidaihe stay, Xi might have been working out while weighing how to deal with Hong Kong and U.S. President Donald Trump.

Trump has clearly warned that it will become difficult for the U.S. to continue trade talks with China if military force is used in Hong Kong as it was in 1989 in Tiananmen Square.

How long will Hong Kong's delicate stasis endure? Once again, all eyes will be on Xi.