Information about the Hong Kong protests is drifting into Guangdong Province, where students who attend school in Hong Kong talk about their experiences. (Nikkei Montage/ source photo by Reuters)
China up close

History shows that what happens down south later spreads across China

TOKYO -- It is hard to imagine the wave of demonstrations in Hong Kong spilling over to the mainland and taking hold in neighboring Guangdong Province.

Not only is Guangdong under strict surveillance, but when speaking to ordinary citizens across the mainland one rarely hears any support for the protesters. The dominant voice on the mainland is in step with that of the Chinese government.

Then why does Beijing keep referring to the "color revolutions" that toppled governments in the former Soviet Union?

A Chinese intellectual, now retired from the front lines of academia, murmured his take.

"It's quite natural," he said. "Everyone is forgetting the historical fact that Hong Kong and Guangdong were the cradles of the Chinese revolution, 100 years ago."

The old man's wisdom came to life after speaking to more people and learning about conversations taking place at dinner tables across Guangdong.

"The ongoing Hong Kong demonstrations are triggering major arguments at ordinary households in Guangdong, sometimes dividing or even breaking apart families," said one Chinese businessman who shuttles between the city and the neighboring province.

Perhaps the flow of people between Hong Kong and Guangdong has been overlooked. If people go back and forth, friendships are nurtured and romances bloom. Indeed, Guangdong has peculiarities different from other parts of the mainland.

Universities and vocational schools in Hong Kong play a key role in shaping this unique circumstance, as many students from mainland China study in the city. The percentage of students and research students from Guangdong is particularly high.

A teacher in the Sinology department at the prestigious Chinese University of Hong Kong, where pitched battles between police and protesters have been taking place this week, disclosed that "as far as research students are concerned, 70% to 80% are from mainland China, and students who were born and grew up in Hong Kong are in the minority."

Mainland students who can afford to attend the expensive Hong Kong institution usually come from wealthy families. For them, the international city is a steppingstone to global careers in New York, London, Tokyo.

Two anecdotes describe the tension in these families.

First, a girl we shall call Vivian, a pseudonym, is the daughter of an ordinary couple living a good life in Guangdong. Vivian is now studying in Hong Kong.

Her boyfriend is a university student who was born and raised in Hong Kong. Naturally, like other students around him, he takes part in the demonstrations.

Vivian is quite sympathetic to student demonstrators, in no small part due to her boyfriend. But she does not take part in the demonstrations herself. Her parents, who support the Chinese Communist Party, have repeatedly told her that doing so is strictly off limits.

Still, whenever she returns to her hometown in Guangdong, the Hong Kong demonstrations inevitably become a topic of conversation. Vivian's parents pull no punches as they call the radicalized youth protesters "useless" and "freeloaders." The parents are not happy about their daughter's relationship with a Hong Kong boy and make that clear at every opportunity.

Vivian stands up for herself, expressing her political beliefs, which have evolved during her time in Hong Kong. Each dinner table debate eventually ends in a shouting match.

Conversations at home have become short and awkward. She now returns to her hometown much less frequently than she did in the past.

The next case is that of Rebecca, also a pseudonym and another female student from Guangdong.

Although she was not particularly interested in politics, Rebecca casually participated in a demonstration for the first time this past summer after being invited by a good friend, a Hong Konger.

She gradually came to understand the feelings of her demonstrating friends and on several occasions rejoined them on the streets for peaceful protests.

But when Rebecca visited her hometown in Guangdong, she was summoned by authorities and grilled over her participation in the Hong Kong demonstrations. Although she initially denied her participation, she was presented with solid evidence. 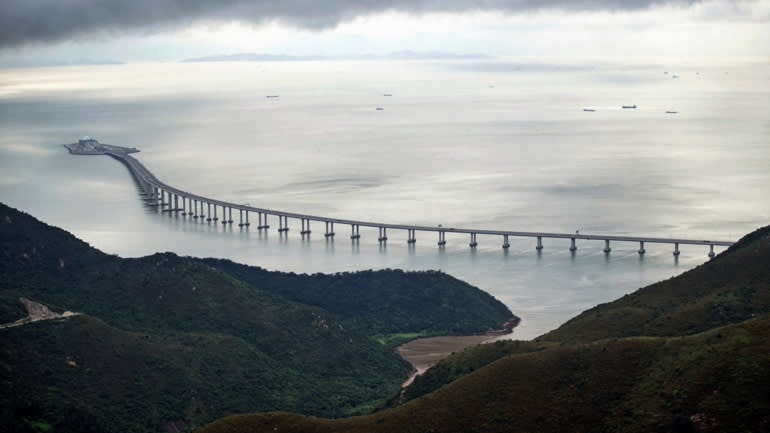 It takes 40 minutes to drive across this 50 km bridge from Zhuhai, Guangdong Province, to Hong Kong. (Photo by Kei Higuchi)

She had been identified through surveillance cameras installed across the city. Due to the evolution of digital technologies, it is said that Chinese authorities can identify individuals, even among a million demonstrators. Masks hide little when eyes, ears, head shape and posture are visible to electronic eyes.

Rebecca desperately explained to Chinese authorities that she "had just accepted a friend's invitation and has no political standpoint." But she was blocked from returning to Hong Kong when it was time for school to resume.

Hong Kong and the Guangdong provincial city of Zhuhai were connected recently by a bridge spanning 50 km of sea. Zhuhai is now only a 40-minute drive from Hong Kong. And high-speed trains arrive directly at a new station on the Kowloon side of Hong Kong from Guangdong. Anybody can commute from Guangdong to Hong Kong; all they need is the money to do so. Various problems arise precisely because so many people so frequently move in and out.

History proves that a political movement in Hong Kong -- far from the political center of Beijing -- has the power to change the nation over a long term. The tale of Sun Yat-sen, the father of the Chinese Revolution, is one such example.

Born to a farming family in Xiangshan County, now Zhongshan City, in Guangdong, in 1866, Sun as a teenager would make his way to the Kingdom of Hawaii, where he was supported by his elder brother. But it was at Hong Kong College of Medicine for Chinese, the predecessor of the current University of Hong Kong, one of the strongholds of the ongoing protests, that he studied Western medicine.

Sun's qualifications as a revolutionary were nurtured when he gradually made a commitment to Western-style revolutionary thought while studying in the British colony.

After graduating from medical school in Hong Kong, Sun worked as an eye doctor in Guangzhou, Guangdong. He then returned to Hawaii and formed the Revive China Society, a political organization aimed at toppling the Qing dynasty. In 1895, after the end of the First Sino-Japanese War, the Revive China Society attempted an armed uprising in Guangdong. But word of the revolt leaked out, and the attempt failed.

In 1911, 16 years after the failed uprising, the Xinhai Revolution, which started with the Wuchang Uprising in Hubei, overthrew the Qing dynasty and established the Republic of China, China's first republic. It is Hong Kong that fostered Sun, whose portrait is hung at Beijing's Tiananmen Square even today.

Two years before his death, when Sun visited his alma mater and recalled his past, he said his revolutionary thought was born in Hong Kong.

There is no way that Chinese leaders, including President Xi Jinping, have forgotten the background of the Chinese revolution. They also know that by deploying troops from the People's Liberation Army or the People's Armed Police in Hong Kong they would show themselves to be iron-fisted rulers similar to those of China's feudal dynasties. 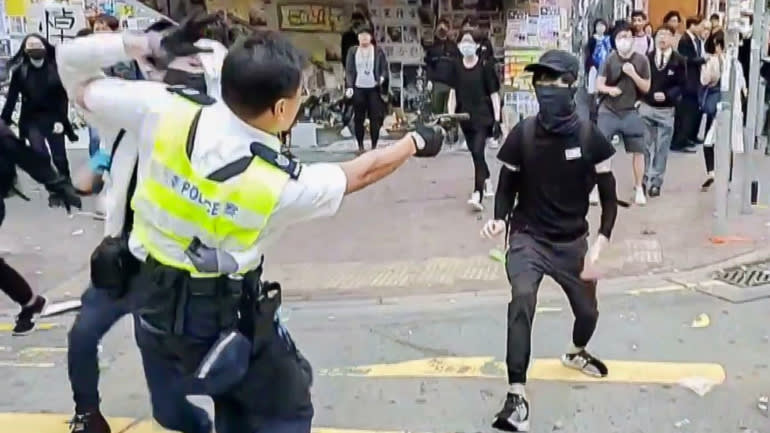 A protester was shot at close range by a police officer on Nov. 11.   © Reuters

For the time being, China has no choice but to respond to continued unrest in Hong Kong by tightening the screws on protesters, with the city's top leader Carrie Lam and local police at the forefront.

On Monday, a police officer fired bullets at demonstrators in a residential area, seriously injuring a male student. Days earlier, a male student died after falling from a building. Away from the streets, Joshua Wong, a 23-year-old pro-democracy activist, has been disqualified from running in district council elections that take place later this month. And pro-democracy members of Hong Kong's Legislative Council, the region's parliament, have been arrested one after another.

The situation in Hong Kong is tense. There are rumors about the possibility of the upcoming elections being postponed on the pretext of the unrest. An advertisement published in pro-China media calling for just such a scenario has cast an eerie pall over the city.

If and when the elections go ahead, they will significantly impact the demonstrations as well as politics in Hong Kong and the rest of China.