Japan would have given red carpet treatment despite Hong Kong law

TOKYO -- Japan is waking up to a daunting reality.

If there had been no COVID-19, the Tokyo Olympics would be opening tomorrow with much fanfare. But this altered reality might have put Prime Minister Shinzo Abe in a difficult position, under international criticism for condoning China's national security law for Hong Kong.

Because if all had gone as planned, Chinese President Xi Jinping would have visited Japan as a state guest in early April.

Just before the visit, the National People's Congress, China's parliament, would have held its annual session, in March. 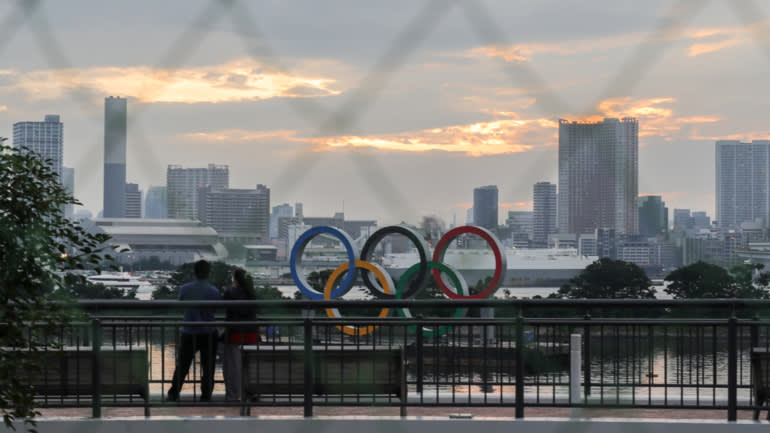 The Olympic rings seen in Tokyo Bay: The global party has been delayed by one year. (Photo by Ken Kobayashi)

The invitation for the state visit already had been sent out. Japan would have had no choice but to lay out the red carpet for the leader of the Chinese Communist Party.

Xi and Abe would have signed the so-called "fifth political document" regarding Sino-Japanese friendship and ties. If Abe had raised issue with the Hong Kong national security law, Xi would have brushed it off, declared the matter an internal affair and stated that interference by foreign forces will not be tolerated. Japanese Prime Minister Shinzo Abe might have found himself uncomfortably sandwiched between Donald Trump and Xi Jinping had the coronavirus not disrupted political and Olympic schedules.   © Reuters

Within China, the Hong Kong security law is perceived as a major accomplishment. It has pushed back the free world and laid down a shining example of the Chinese governing style. At least that is how it is being received in Communist circles.

By hosting Xi as a state guest, Japan might have been slammed for supporting that narrative. In light of current U.S.-China tensions, it is not hard to imagine the Trump administration coming down hard on Abe for such behavior.

As host of the Olympics, Abe would have greeted foreign leaders and guests with a smile. The smile may not have been returned by some.

The Japanese government likely would not have been able to take the initiative -- like it actually did -- in issuing an international joint statement strongly calling for China to reconsider the new law.

In reality, Xi's Japan visit was postponed. So too were the Tokyo Olympics. But China's NPC session was held after a two-and-a-half-month delay, and the law was pushed through.

Japan would have had no way to understand the inner workings of China's decision-making process. But like many cases these days, what happens behind Beijing's bamboo curtain has implications for the whole world.

As Washington and Beijing lock horns on the global stage, many Asian countries are closely watching how Japan -- a staunch U.S. ally -- will juggle relations with both superpowers.

"China has issues with the U.S., the U.K., Australia and India," one Asian diplomat recently said. "This summer, is it really going to send hundreds of fishing boats to the Senkaku Islands and make a fuss with Japan too?"

Only China knows the answer to that.

"Will Xi be able to visit Japan in the end?" asked another Asian diplomat. Scenes from 2012, after Japan nationalized the Senkaku Islands: Anti-Japan protests in the Chinese city of Suzhou, west of Shanghai, and a Japan Coast Guard patrol ship keeping an eye on a Chinese marine surveillance vessel near the East China Sea islands. (Source photo by Kyodo)

That is because China's hard-line stance, as exemplified by the abrupt introduction and passage of the Hong Kong security law, stems from domestic politics that cannot be seen from the outside.

As such, Sino-Japanese relations have become ever so difficult to manage.

In Japan, the ruling Liberal Democratic Party submitted a resolution to the government criticizing the Hong Kong law and claiming it "has no choice but to call for the cancellation" of Xi's state visit.

In a recent Nikkei poll, 62% of respondents said Xi's state visit to Japan "should be canceled." Even most supporters of Komeito, the traditionally China-friendly coalition partner of the dominant Liberal Democratic Party, shared the view, with more than 50% saying the visit should not go through.

A considerable number of Japanese believe that if China had taken the right steps after the coronavirus was found in Wuhan and contained the spread, Japan would have been able to hold the Olympic Games this week.

As if to reflect this tension, Abe and Xi have gone months without holding a single telephone conversation.

At present, tensions around the Senkaku Islands are also becoming serious.

China Coast Guard ships have been confirmed in the contiguous zone around the islands for over 100 days in a row, marking the longest streak since September 2012, when strong anti-Japanese demonstrations swept through China in response to Japan's nationalization of the islands.

China is now also moving in the Pacific. A Chinese maritime survey ship was spotted within Japan's exclusive economic zone, or EEZ, near its southernmost island of Okinotori between July 9 and July 18.

The Japanese government lodged a protest with China through diplomatic channels, but the Chinese Foreign Ministry reiterated its position that permission from Japan is unnecessary because Okinotori is not an island but a reef with no EEZ or continental shelf. Chinese President Xi Jinping and officials, some wearing face masks, attend the second plenary session of the National People's Congress at the Great Hall of the People in Beijing on May 25, 2020.   © Reuters

China's aggressive maritime moves are also related to the situation in the South China Sea.

In a new development, the Trump administration last week aligned its position with an international court ruling handed down four years ago and rejected China's claims to maritime interests across most of the South China Sea as "completely unlawful."

Also, it has been reported that the U.K. is planning to send a carrier strike group led by the state-of-the-art aircraft carrier HMS Queen Elizabeth to the Far East at the beginning of next year.

It is possible that the British aircraft carrier will operate in partnership with U.S. carriers involved in "freedom of navigation" operations in the South China Sea.

Military pressure on China will mount. Amid the pressure, China will weigh its options on how to interact with Japan.

Some Japanese companies are already preparing to relocate their Chinese production bases outside the country. If China puts strong pressure on Japan, it could further drive the economically important neighbor to the U.S. side and even lead to the cancellation of Xi's Japan visit.

That visit has already become difficult, at least by the end of this year. What about the future?

Some in Japan's political world say close attention should be paid to next summer's Tokyo Olympics.

If the pandemic is under control by next summer and it becomes certain that the sporting extravaganza will be held, Japan and China may be able to make a fresh start and readjust Xi's Japan visit.

But China's 2021 and 2022 political calendars are busy. Events to mark the 100th anniversary of the Communist Party's foundation are scheduled for the summer of 2021, while the party's next national congress is slated for the autumn of 2022.

There will be top leadership changes at the party's 2022 national congress, which will decide China's future direction.

There will also be developments in the Japanese political situation as Abe's current three-year term as president of the Liberal Democratic Party ends in September 2021. It will be very difficult for Tokyo and Beijing to find a slot for the Xi visit amid their busy political schedules.

Amid all the uncertainties -- the coronavirus pandemic, Hong Kong, the U.S.-China confrontation and the Tokyo Olympics -- the issue of Xi's state visit to Japan remains adrift.