In the family tradition, Kim Jong Un pits China against US

TOKYO -- As of now, trade tensions between the U.S. and China have become so heated that the two sides are unable to convene a ministerial meeting to address their differences.

To North Korean leader Kim Jong Un, it is a situation ripe for exploitation.

Last week, atop the sacred mountain of Paektu, Kim was in a jolly mood. At his side was South Korean President Moon Jae-in, who became the first leader of the South to climb the 2,744-meter mountain that straddles North Korea and China. Such an act had been unimaginable until recently.

When the two leaders reached Janggun Peak, overlooking Heaven Lake, Kim touched on a topic that is sensitive to China. Chinese official media did not run reports on these words, picked up by microphones carried by South Korean journalists.

"Chinese people are envious of this," Kim said triumphantly, looking across the water.

Sheer cliffs rise up all along China's side of the lake. Along North Korea's side, a slope allows hikers to approach what is one of the world's highest crater lakes. Kim really was saying that China cannot walk down to the lakeside, but we can.

Moon, who was visiting North Korea for the first time, asked, "Where is the border with China?"

Kim pointed beyond the lake.

After having their pictures taken at the lakeside, Moon filled a plastic bottle with lake water. 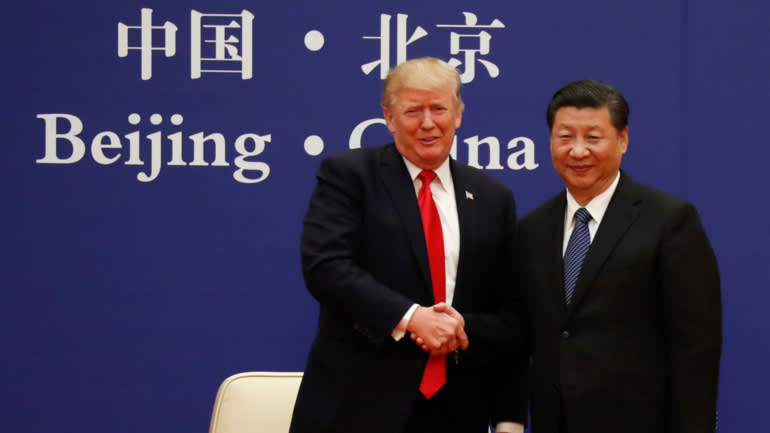 Kim can claim the lakeside as North Korean territory thanks to his grandfather, Kim Il Sung, and the 1962 Sino-North Korean border agreement in which China ceded more than half of the mountain it calls Changbaishan to North Korea despite Beijing's claim on the whole of it.

The negotiations that led to the pact have long been an enigma. The initial talks were especially intriguing because Kim Il Sung and Mao Zedong, the founding father of the People's Republic of China, took part. While visiting China, Kim asked Mao to cede Ji'an, Jilin Province, which used to be the capital of Goguryeo, an ancient Korean kingdom that lasted until 668.

Chinese and Koreans read Goguryeo's history differently. When China began declaring around 2003 that Goguryeo had been a remote outpost, a kingdom of a distinct ethnicity but part of China nonetheless, it provoked fierce protests from Koreans, who see Goguryeo as a great Korean state of ancient times. South Korean media called China's declaration a fabrication of history.

The Goguryeo kingdom stretched from what is now northeastern China to the northern part of the Korean Peninsula. Its capital stood in what is Ji'an today, until it was moved to Pyongyang sometime in the fifth century.

Ji'an was not the only thing Kim Il Sung demanded. Beijing should have no trouble ceding Mount Paektu, Kim said. "China's land mass is so vast."

Mao refused to give up Ji'an. But he summoned Premier Zhou Enlai and instructed him to make some concession on the mountain that Kim Il Sung wanted so much. As a result, 54.5% of Heaven Lake was given to North Korea, while China kept 45.5%.

Kim Il Sung, a shrewd strategist, took advantage of the confrontation between China and the Soviet Union over which nation would lead the international communist movement. China, which lacked the Soviet Union's strength, was eager to have North Korea on its side. Kim capitalized on this, winning half of Mount Paektu without breaking a sweat.

Now China and the U.S. are squaring off over economic models. And Kim Jong Un, like his grandfather, sees golden opportunities of his own. Trump and Chinese President Xi Jinping also are sparring over security, and Kim holds some big bargaining chips: his nuclear weapons and ballistic missiles.

Just a year ago, the U.S. and China were working hand in hand to rein in North Korea's nuclear development program. Following a North Korean nuclear test on Sept. 3, 2017, U.S. Ambassador to China Terry Branstad repeatedly visited areas near the China-North Korea border in an effort to increase pressure on Pyongyang.

With the two economic superpowers working together, international sanctions eventually began to freeze North Korea's economy. But then in 2017 appeared Moon, a godsend for Pyongyang. Kim sent a delegation to the Winter Olympics in the South Korean city of Pyeongchang, setting the stage for a historic North-South summit with Moon.

Brushing off criticism from South Korean conservatives who warn that he is committing excessively to North Korea, Moon visited Mount Paektu, which Kim Il Sung designated as the foundation of anti-Japan activities and is considered the birthplace of his son Kim Jong Il, father of Kim Jong Un.

By visiting the sacred mountain, Moon in effect endorsed the Kim family's "blood of Paektu" narrative.

But only a year and a half ago, another individual of the Paektu bloodline, Kim Jong Nam -- the eldest son of Kim Jong Il -- was assassinated in Malaysia. Kim Jong Nam lived in Beijing and Macao, giving rise to speculation that he had a special relationship with China.

On the surface, China welcomed the latest Kim-Moon summit. But at heart, China has reservations because it thinks Kim Jong Un intends to manipulate its relations with the U.S. -- in the Kim tradition.

At issue is the declaration of an end to the 1950-1953 Korean War. After the Kim-Moon summit, the South Korean presidential office said the agreements made at the summit were equivalent to an end-of-war declaration.

Beijing is watching closely how an official declaration will be made. Though China was part of the armistice agreement on the Korean War, alongside North Korea and the U.S., Kim Jong Un has not clarified the position of China. This appears to be the issue behind Xi's decision to skip the ceremony marking the 70th anniversary of North Korea's foundation on Sept. 9.

Kim and Moon agreed that the North Korean leader will visit Seoul by year-end. There is word that Trump will be invited on the occasion for the declaration of an end to the war by the three leaders.

The trilateral declaration was temporarily taken up when Kim and Trump met in Singapore in June. They will hold the key to whether Xi joins the three. Xi will be brushed aside if Kim and Trump join hands.

Under the 1962 border agreement, China made great concessions to North Korea and drastically improved the bilateral relationship, as planned by Beijing. The Soviet Union was outsmarted by China.

But a Soviet political upheaval featuring leader Nikita Khrushchev's downfall occurred in 1964, and the Cultural Revolution began in China in 1966, prompting North Korea to distance itself from China and become inclined toward the Soviet Union. China's territorial concessions to North Korea ended in vain.

China's exclusion from the process of deciding the Korean Peninsula's future cannot be ruled out. While an abandonment of nuclear weapons by North Korea would gravely affect China's security strategy, the Chinese government is more concerned about whether Pyongyang will lean toward Washington or Beijing.