Marathon runners run past the portrait of late leader Mao Zedong in Beijing's Tiananmen gate. The struggle for political survival has always been ferocious in China.   © Reuters
China up close

Big fish Wang Qishan has slipped into the dark ahead of the Oct. 18 Party Congress

TOKYO -- In the world of intelligence and espionage, public information is the puzzle and the piece that does not fit is the window through which spies try to understand what is going on.

A quick look at the public appearances of the "China Seven," the seven members of China's top decision-making body, shows that one person has vanished behind the clouds.

Between July 1 and Sept. 3, President Xi Jinping appeared on the official Xinhua News Agency a total of 920 times. Other members of the Politburo Standing Committee range from 163 mentions to 51. Only Wang Qishan, the anti-corruption czar and officially No. 6 on the standing committee, hovers at 18. He has not been mentioned on Xinhua since Aug. 6.

China watchers like to say that whenever the top graft buster disappears from the public eye and reappears, something big happens. In the most recent case, it was the fall of Chongqing party boss Sun Zhengcai. 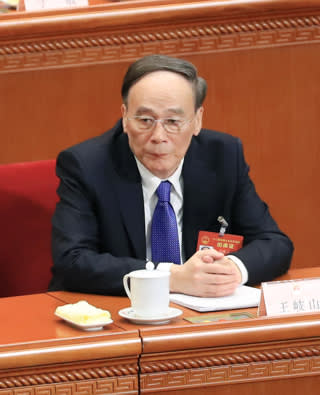 With the countdown to the 19th National Congress of the Communist Party of China now officially underway -- the Politburo announced the date on Aug. 31 -- all eyes are on Xi's right-hand man Wang. Will another joker fall from the deck in the run-up to the biggest political event in five years? Or will it be Wang himself that loses his power?

Disappearing at the beach

Two phrases have become buzzwords among Chinese political animals: "qisan" and "haibian." Chinese authorities are censoring online usage of these words, thus rubber-stamping them as highly sensitive in regard to Wang's political future.

In China, an online search that contains the two terms would not bring up any results. Instead a message would be displayed: "According to relevant laws, regulations and policies, search results for these terms cannot be displayed."

"Qisan" literally means "7 and 3." But among Chinese netizens, it is also code for "Wang" because Wang's given name, Qishan sounds like qisan.

"Haibian" literally means seaside. But it has also become internet slang for the annual Beidaihe meeting, which this year was held at the beginning of August at the seaside resort in Hebei Province. The Party's National Congress is thought to have been high on the agenda. A search for the words 'qisan' (seven and three) and 'haibian' (seaside)' on microblogging website Weibo leads to this announcement: "According to relevant laws, regulations and policies, search results for these terms cannot be displayed."

In mid-August, many online posts containing both "qisan" and "haibian" could still be found on Chinese social networks and other platforms like WeChat, the country's most popular messaging app.

One of these posts questioned whether "Qisan had disappeared after a walk on haibian."

The stamp of truth

Most of the seven members of the Politburo Standing Committee, the party's top decision-making body, are supposed to retire at the National Congress because of their age, although Xi and Premier Li Keqiang will stay on.

Whether the rules are changed to allow Wang to stay on, post retirement age, has sparked global curiosity. "If Wang is forced to retire, Chinese people will think Xi's power is actually weaker than widely believed because he could not defend even his long-time ally," one source said.

Wang -- considered the de facto No. 2 in China's political hierarchy -- became less visible sometime in July. Then, on the morning of Aug. 24, he was reportedly seen at the funeral of an old Chinese Communist Party cadre. Xinhua did not report it, but the online edition of Caixin, an influential Chinese economics magazine, did. The magazine's head editor is said to be close to Wang.

The news went viral. As it spread across social media, authorities did not censor it, thus rubber-stamping it as true.

Wang's reported public appearance on August 24 came at the funeral of An Zhiwen, an old party cadre. The ceremony took place in Babaoshan, Beijing. Other Politburo Standing Committee members were also on hand. 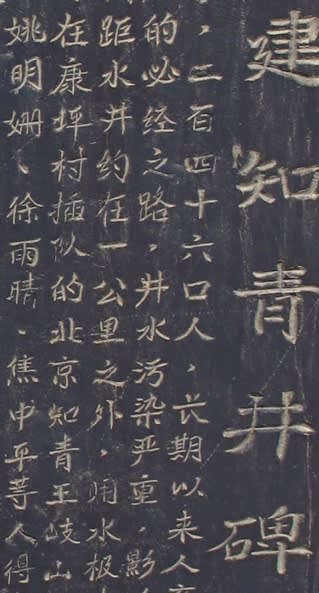 The names of Wang Qishan and his wife, Yao Mingshan, (second and first columns from the left, respectively) are inscribed on a monument built in the memory of the intellectual youths who had been "sent down" to the village of Kang Ping, Shaanxi Province.

An Zhiwen was 98. He had served as an adviser to the State Commission for Restructuring the Economic System, which promoted Deng Xiaoping's "reform and opening-up" policy of the late 1970s. He also served as a member of the Communist Party's Central Advisory Commission.

An was born in Shaanxi and maintained close links to the province. The Shaanxi connection speaks volumes in Beijing's Kremlinology.

As it happens, a book highlighting Xi's links to Shaanxi hit bookstores with much fanfare shortly before Wang reappeared in public. The book's publisher is affiliated with the Party School of the Communist Party's Central Committee, also known as the Central Party School.

The book tells the story of the Chinese president's seven years as an "intellectual youth" in Shaanxi. The cover photo shows Xi still in his late teens and slender.

Xi and Wang first met in Shaanxi. It was there that they forged what would become an enduring friendship. They both found themselves in Shaanxi because of Mao Zedong's Cultural Revolution, a decade-long catastrophe that Mao began in 1966 as a way to route his rivals.

Two years after the Cultural Revolution broke out, Xi was sent from Beijing to live a "sent down" life in a remote farming village near Yan'an, a city in Shaanxi. He was 15.

Under Mao's "Up to the Mountains and Down to the Countryside Movement," launched in 1968, numerous "intellectual youths" were sent to live and work in rural areas.

Xi's father, Xi Zhongxun, got on the wrong side of Mao and was in dire political straits. Xi's mother, Qi Xin, wanted her son to escape Beijing's treachery and his father's political troubles.

Four years ago, I visited Kang Ping. A villager who once cared for Wang and other intellectual youths told me about the old days. The old man had built a monument in memory of the sent-down intellectuals who continued to cooperate in the village's development even after returning to Beijing. The names of Wang and his wife, Yao Mingshan, are inscribed on the monument. The two were boyfriend and girlfriend during their sent-down days.

Yao is the second daughter of Yao Yilin, a former Politburo Standing Committee member who once served as China's vice premier. He died many years ago.

Yao Yilin was an influential conservative figure. He was a Politburo Standing Committee member during the Tiananmen protest and military crackdown of 1989. After the military ended the massive protest by spilling Chinese blood, Yao Yilin was on thin political ice.

And it is through Yao Mingshan, Wang's wife, that his enemies are attacking the fort.

Guo Wengui, a Chinese billionaire who has fled to the U.S, continues to attack Wang on Twitter and YouTube, accusing Wang's family, including his wife, of being involved in serious corruption at the HNA Group, a Chinese conglomerate that is expanding its overseas operations.

If what Guo is saying is correct, Yao Mingshan acquired U.S. nationality in the first half of the 1990s, shortly after the Tiananmen crackdown. The elder Yao was apparently considering whether to let his daughter flee to the U.S., just in case.

It is widely believed that some of Xi's party foes are behind the series of bombshells Guo is dropping about Wang's family. And some of these jolts may be having their intended effect.

The battle between Xi and his rivals are taking place through the airwaves and social media. Each side is trying to project momentum on their sides.

In July, Sun Zhengcai, the party chief in Chongqing, became the latest high-profile victim of Xi's anti-corruption campaign. Chen Min'er, a close aide to Xi, replaced the former rising political star as the top official in the key city.

Xi seems to be more confident than ever. He and many Politburo members on Aug. 27 visited Tianjin to attend the opening ceremony for the National Games of China, dubbed the country's "mini-Olympics."

Tianjin is also a key eyebrow-raiser in Beijing's Kremlinology. The city, just a half-hour ride by high-speed rail from Beijing, is where many people were killed or injured by massive explosions in August 2015, shortly after that year's Beidaihe meeting. Speculation that the explosion was a terrorist attack have not died down. The city was in a heightened state of alert for the leaders' visit. Was it just an accident? Rumors that the Tianjin explosions in August 2015 were a terrorist attack have not died down.   © Reuters

Xi was accompanied by top uniformed military official Xu Qiliang. Many members of the military were mobilized for security, perhaps to compliment the less reliable police and armed police there.

Xi concurrently serves as chairman of China's Central Military Commission. Xu, who hails from the air force, is one of the two vice chairmen of the powerful commission. He is a close aide to Xi.

If Fan Changlong, the other vice chairman of the commission, hailing from the army, retires in October because of his age, as is widely expected, Xu will gain further influence over the military.

Fan is said to belong to the faction of Hu Jintao, Xi's predecessor.

National TV news footage from the opening ceremony shows Xi accepting requests from numerous sports officials and other attendees to shake hands, a big smile on his face. The long piece of tape shows a supreme leader being adored by his public.

It is likely that Xi wanted to demonstrate that the politically important but tricky city is now under Xi's full control.

Where Wang comes in

Xi harbors a thinly veiled ambition to go down in CCP history as a great leader, on par with Mao and Deng. To that end, Xi will have to pave the way for his reign to be extended beyond the party's 2022 National Congress. He has a big hurdle to clear: He will be older than the unofficial party retirement age of 68.

That remains to be seen. Xi would first have to overcome differences with his two predecessors, Hu and Jiang Zemin. The tug of war -- Xi on one side, Jiang and Hu on the other -- is a complicated struggle.

Since the funeral, Wang has slipped back into the dark.