What do Marxism and Xi Jinping have in common? Both are at a loss to explain what is happening in Hong Kong. (Nikkei Montage/ Source photos by Reuters/ AP)
China up close

City's masses give birth to a new struggle

HONG KONG -- The protests in Hong Kong have a new front -- a daily "lunchtime demonstration" held in the tony Central district, where well-heeled bank and securities company employees pair their business attire with face masks.

The protest anthem "Glory To Hong Kong," the line "revolution of our time" and the slogan "Hong Kong people, resist" reverberate through a district lined with luxury-brand boutiques.

Now running for half a year, the Hong Kong protests are starkly different from the 1968 student protests in France and Japan in that the movement is widely supported by the general public. Even middle-class Hong Kongers who are relatively content with their current lives join in shouting "Resist!"

That came to fruition in the Nov. 24 local elections, when pro-democracy forces won 388 of 452 district council seats. In the days after vote, the city settled down as if a truce had been called. But when it became clear the city's government has no intention of responding to voters' overwhelming call for greater democracy, protesters returned to the streets.

Chow Po Chung, an associate professor at the Chinese University of Hong Kong, has analyzed the situation and believes a new model of struggle that cannot be explained by Marxist theory is being established. 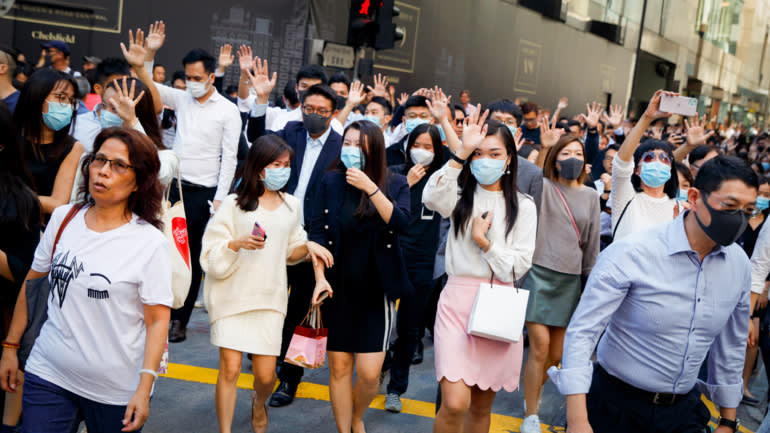 In Hong Kong, the proletariat and the controllers of capital march together.   © Reuters

Karl Marx wrote about a class struggle that pitted the labor-providing proletariat against bourgeoisie elites who control the capital and means of production.

But, Chow said, "Hong Kong's conflict is a movement Marx, who advocated for revolution by the proletariat, did not assume. Hong Kong residents, including the middle class, have awoke to a sense of community."

Furthermore, there is no clear leader of the current protest movement; each participant acts on his or her beliefs.

Meanwhile on the mainland, the ideas of Marx, who died in 1883, are roaring back to the forefront, with "Schools of Marxism" showing up at major universities.

Schools of Marxism are places where the ideology of the German philosopher -- which is enshrined in the Chinese Communist Party's constitution -- is instilled in students. The return of Marxism has accelerated since Xi Jinping became party general secretary and Chinese president.

In the lecture, Xi instructed party members to study Marxist theory, describing it as "a compulsory subject." In mainland China, Marxism is on the march.

The renewed focus on Marx is a tactic to help the party tighten its grip on Chinese citizens amid the unrest in Hong Kong and the crisis in U.S. relations.

A similar method was adopted by the party after the 1989 military crackdown on pro-democracy student protesters at Beijing's Tiananmen Square. Back then, military training was revived as part of university education.

Today, universities have earmarked ample budgets for courses on Marxism because Xi himself is behind the pep talk.

The problem is, however, that the country's schools lack personnel who can properly teach Marxist theory.

Under former leaders Deng Xiaoping, Jiang Zemin and Hu Jintao, China's "socialist market economy" came into full bloom. Scholars toyed with market economics while the outdated socialism was shelved. No one could make a living by teaching Marx.

But Xi has ushered in a dramatic shift. At the end of October, at the fourth plenary session of the party's 19th Central Committee, China vowed to uphold and improve its "basic socialist economic system."

It talked of consolidating and developing the public sector. It talked of "guiding" the private sector.

And while it did say it will accelerate efforts to improve the "socialist market economy," all signs indicate that the emphasis was on "socialist" rather than "market."

During a meeting on Friday, the party's powerful 25-member Politburo deliberated draft ordinances, some of which are aimed at strengthening party cells at state-owned companies. Other ordinances under discussion would bolster ideological education.

Many party members likely feel this new direction goes against the times. They look in puzzlement as the party turns to old text books to guide the path.

In China today, there are two opposing currents clashing at full force. The political movement in Hong Kong is a new type of revolution that has left behind Marx's theories. In the rest of China, a Marxist revival is under way.

Caught in the middle, the Hong Kong government has found itself stranded. 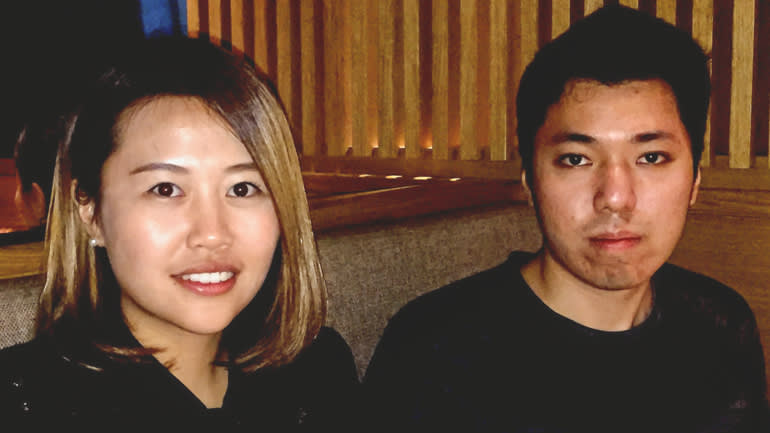 In Hong Kong's district council elections, pro-democracy candidates won big, even in areas long dominated by pro-Beijing forces. Choi Chun Wai, a lecturer in the Department of Asian and Policy Studies at the Education University of Hong Kong, pointed to structural changes.

"What is noteworthy is the Wong Tai Sin district, a residential area on the Kowloon Peninsula. Although it was originally the electoral power base of pro-China forces, the election result there came as a surprise, with pro-democracy forces winning all 25 seats," Choi said.

Carmen Lau Ka Man, a 24-year-old candidate from the pro-democracy Civic Party, was elected to the Wong Tai Sin district council for the first time, only two years after graduating from university.

Looking back on the eve of the elections, she said: "I thought my chances of being elected were 50-50 at best." As it turned out, she garnered over 4,500 votes, trouncing a pro-Beijing candidate by 1,100 votes.

Lau is a graduate of the Chinese University of Hong Kong's Department of Government and Public Administration. She said 17 graduates of the department who ran in the district council elections as pro-democracy candidates won.

George Wong Hok Lai, a 26-year-old independent pro-democracy candidate, was reelected in the Sha Tin district, near the university. Wong is also a graduate of the same department.

Wong was at the forefront of the Umbrella Movement, student-led pro-democracy protests in 2014. Wong ran in the following year's district council elections, winning a seat at the age of 22 and drawing attention as Hong Kong's youngest district council member.

Four years on, Wong was reelected as voters recognized his steady pursuit of democracy. In contrast to Lau and Wong, five graduates of the Chinese University of Hong Kong's Department of Government and Public Administration who ran in the latest district council elections as pro-Beijing candidates were defeated.

The election results have forced Chinese authorities to realize that public opinion in Hong Kong is not in line with the wishes of the party's Central Committee. But the results have not forced Chinese leaders to admit this. Details of the elections have not been reported in China. Peripheral information is also being blocked, and most Chinese do not know the stunning fact that pro-democracy forces won 85% of Hong Kong's district council seats.

A male Hong Konger in his 40s who knows many mainlanders texted the results to them on WeChat. He then continued chatting with these acquaintances thinking they had received his news about the elections. But parts of his messages that included the voting figures never made it to his mainland friends.

He then began texting general accounts of what happened using rounded numbers, but these messages also failed to reach their intended recipients. The Hong Konger then made a final attempt to get word of what happened into the mainland using no numbers at all, but to no avail.

Only the information related to the Hong Kong elections was deleted -- in all three attempts. He then gave up trying to share the news.

China's internet censorship system, now more efficient than ever thanks to artificial intelligence, is more powerful than most people think.

The WeChat messaging app is provided by Tencent Holdings, a private Chinese company. But in China, authorities can order service providers to delete content on "security" grounds, suspend accounts and supply personal information. Masked protesters hold a March of Gratitude to the U.S. in the Central district of Hong Kong on December 1.   © Reuters

What will happen to the Hong Kong protests?

The key demands -- including a fully democratic election to choose Hong Kong's chief executive, the former British colony's top official, and the establishment of an independent investigative organization to probe police violence -- have been ignored by the stranded government.

"If the demands are not met, the protest activities might spread further," said Lau, the newly elected Wong Tai Sin council member.

Lau is aware of the difficult role pro-democracy district council members have carved out for themselves.

The "revolution of our time," which Marx would not recognize, faces an uncertain future.