China talks of US decoupling and a divided world "I feel embarrassed about the poor transit infrastructure," Kim said when Moon said he would like to visit Mount Paektu via North Korea.

Kim said that the North Korean members who visited the South to attend the Pyeongchang Winter Olympics in February had reported back that the high-speed train connecting the capital Seoul and the Northeastern city of Pyeongchang was impressive.

North Korean state media said that henceforth "the overall projects of the party and the country will be geared towards building of a socialist economy, and all our efforts will be made towards it."

China hailed the pledge. "China welcomes this," Foreign Ministry Spokesperson Lu Kang said in the hours that followed. "We hope that the DPRK will score achievements in developing its economy and improving people's livelihood."

It is what Beijing has been suggesting to Pyongyang all along: Give up the weapons development program and adopt a Chinese-style "reform and opening-up" of the economy. It worked miracles for us and should work for you too, the advice would go. China's chief architect of reform, Deng Xiaoping gets a kiss from one of his grandchildren in 1986.   © Reuters

China would be comfortable with such an outcome. A North Korea that can stand on its own feet, one that is less of a hermit nation armed to the teeth, and more a member of the international community.

A less advertised motive may be to discourage the unification of the two Koreas so that North Korea would continue to be a strategic buffer for China, keeping the U.S. forces based on the peninsula away from the Chinese border.

This year marks the milestone 40th anniversary of China's "reform and opening-up" policy, which was initiated in 1978 by then-leader Deng Xiaoping. Deng introduced elements of the market economy to increase productivity and spur growth, but all under the watch of the Chinese Comunist Party. He called it Socialism with Chinese characteristics.

Hopes had mounted in Beijing when Kim chose to visit Zhongguancun, dubbed the "Silicon Valley of China" and a symbol of China's economic rise, on March 27. Kim and his wife Ri Sol-ju are said to have donned a virtual reality device during the visit.

Despite the recent warming of relations between Xi and Kim, the reality of China-North Korea relations is complicated. While acknowledging the need to focus on its economy, North Korea has never really bought into the "reform and opening up" program that China preaches.

"For many years," a Chinese scholar said, "North Korea has feared that if it were to reform and open up Chinese-style, it could be economically swallowed by its huge neighbor and Kim could have his authority undermined."

That fear and caution toward China has been passed down, starting from Kim's grandfather, Kim Il Sung, who founded North Korea, and then to Kim Jong Il, the second leader and Kim Jong Un's father.

The fear has nudged the Kims to explore different options in the past. In September 2002, when Kim Jong Il was the dear leader, North Korea abruptly announced the establishment of a special administrative region in the strategically important city of Sinuiju.

The special administrative region had some surprising elements. First, the official currency would be the U.S. Dollar. Second, half of the zone's leadership would be made up of foreign nationals.

It would be the "Hong Kong" of North Korea located right at China's doorstep. The city of Sinuiju is across the river from Dandong, in China's Liaoning Province. But it would be, in effect, "China free." Beijing was not consulted, nor was help from China required. The most bizarre piece of the plan was that Yang Bin, a wealthy Chinese-Dutchman who was born in Nanjing, was appointed as the Sinuiju special administrative region's top official. At the time, Yan was a 39-year-old businessman based in Liaoning Province's Shenyang. He was involved in a wide range of businesses, including the growing and selling of ornamental plants. Yang had built strong connections with Kim Jong Il through repeated visits to North Korea.

At the same time Kim Jong Il was turning his back on China, he was warming up to Japan. The plan was announced the same month that Junichiro Koizumi became the first Japanese prime minister to visit North Korea and hold talks with the country's leader.

One long-standing issue between North Korea and Japan has been North Korea's abductions of Japanese from the western coast of Japan. Kim Jong Il apologized for the abductions, which had taken place decades earlier, and moved to normalize bilateral ties. He even put North Korea's nuclear and missile development programs on the table.

And the Sinuiju project would help smooth relations; it was an attempt to promote trade with Japan, Europe, the U.S. and South Korea. China's leadership was infuriated. Chinese President Jiang Zemin and his government railed against the plan. A massive special economic zone right on the border would inevitably pit China against North Korea in a race for foreign capital.

Ten days after Yang -- the Chinese-Dutchman -- was announced as the top official of North Korea's special zone, Chinese police detained the botanist in Shenyang on suspicion of tax evasion.

North Korea was humiliated. It called for Yang's release and extradition, but Yang was indicted and sentenced to 18 years in prison.

The episode illustrates what is essentially a long-brewing feud between China and North Korea.

Around 2015 -- after Xi and Kim Jong Un had ascended to power -- there was a push to reimagine the Sinuiju plan as a China-North Korea collaboration.

But the initiative again stalled as Kim pushed ahead with nuclear tests in Punggye-ri, near another part of the border with China, and spoiled Sino-North Korean relations.

Today, with all the diplomatic breakthroughs of the past few weeks, economic development along the Sino-North Korean border could retake the spotlight.

Be that as it may, North Korea's wariness of its big neighbor remains, and economic cooperation between the two will not come easily. 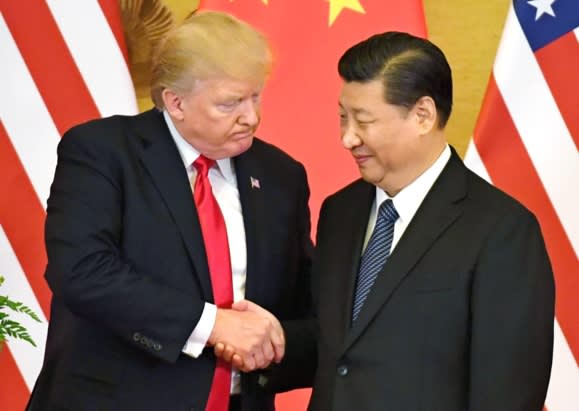 Donald Trump meets Xi Jinping in Beijing in November 2017, when it seemed unlikely that Trump would be able to forge a relationship with Kim Jong Un that would put Xi ill at ease. (Kyodo photo)   © Kyodo

Knowing that China could economically and financially dominate North Korea, Kim has turned to U.S. President Donald Trump, who he plans to meet by early June.

Kim seeks two guarantees from Trump: that Washington will not interfere with his government and that it will normalize relations with Pyongyang.

If Trump delivers, capital from the U.S., Japan and South Korea would likely start flowing into North Korea.

And if Kim is skillful enough, he might be able to win technology transfers from the West, just like China has been doing. In North Korea's case, it would likely use the allure of cheap labor to tempt American, European and Japanese companies targeting China's swelling consumer market.

North Korea has a history of reading the ebbs and flows of Northeast Asian politics and getting away with what it can. If Kim follows through and halts his nuclear tests and missile flights, he and Trump might be able to stop trading threats and engage each other. This would be a welcome development for Xi, surely a better alternative than a U.S.-North Korean war.

But it also presents China with a danger -- the possibility that the U.S. and North Korea could grow chummy and, along with South Korea, resolve Korean Peninsula matters on their own.

Trump seems to be aware of Kim Jong Un's gamesmanship and has chosen to plant some safety valves of his own. Over the past week, he has been continuing to praise the efforts of Xi in making the Trump-Kim meeting possible.

"President Xi of China has been really good at the border. Everyone's surprised at how tight he clamped down," Trump said last Friday at a joint press conference with German Chancellor Angela Merkel, suggesting that Kim's recent change of heart was the result of China squeezing its trade with North Korea, leaving Pyongyang with no option but to play nice.

A historic political shakeout is on Northeast Asia's horizon, and all the players have their positions staked out. But it is too early for any of them to get excited.