The last time a calamity delayed a Chinese leader's state visit to Japan was in 1998, when flooding in Wuhan beckoned then-President Jiang Zemin. (Nikkei Montage/ Source photos by AP/ Kyodo and Xinhua/ AP)
China up close

TOKYO -- Ending weeks of speculation amid the global spread of the novel coronavirus, Japan on Thursday announced that Chinese President Xi Jinping will postpone a state visit to Japan planned for early April.

China made the painful decision after its top diplomat, Politburo member Yang Jiechi, visited Japan on Friday and Saturday to review the coronavirus situation with his Japanese counterparts as well as to discuss what to do next.

The difficulty of an April visit has been clear for a while. The natural course would have been for Beijing to have notified Tokyo weeks earlier that under the circumstances there was no choice but to reconsider Xi's travel schedule so China could focus all efforts on fighting the virus and protecting the lives and safety of its people.

But for reasons to be stated later, Beijing could not do this.

Xi's Japan visit was to be much more than a trip to a neighboring country. It represented a major piece in a political and economic puzzle that the leader was putting together. 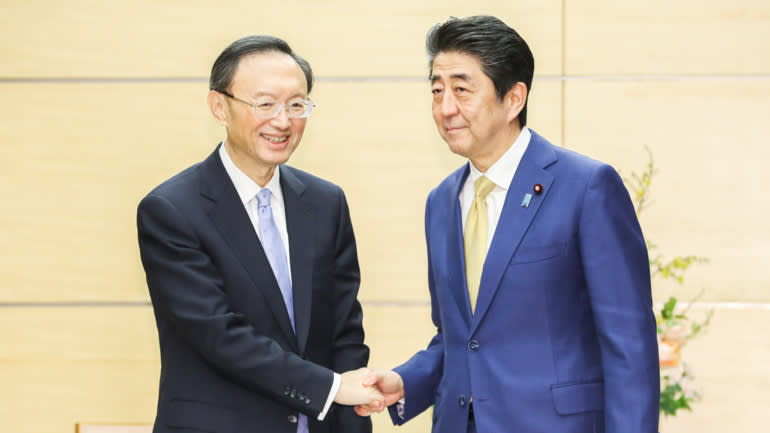 Xi's game plan was to secure victory in "the people's war" against the coronavirus, convene the annual session of the National People's Congress, China's parliament, perhaps in late March, which would have been a couple of weeks later than originally scheduled, and then head over to Japan.

Xi making a state visit to Japan was to be a golden opportunity to show the world that Chinese diplomacy, disrupted by the virus, was alive and kicking.

Such a projection of normalcy also would have helped put the battered economy back on track.

This was important. After a grueling trade war with the U.S., the scourge of the coronavirus was further hammering the economy, even risking China's place in the global supply chain.

China's recently released manufacturing Purchasing Managers' Index for February came in at 35.7, well below market expectations and marking a sharp decline of 14.3 percentage points from the previous month. It was the lowest figure on record, plunging below levels seen immediately after the collapse of Lehman Brothers in the autumn of 2008.

Xi's concern about the economy could be heard in his words on Monday, during a coronavirus-related inspection tour in Beijing. Xi said that communicable diseases are "serious risks to the country's national security, development and social stability."

The direct mention of social stability reflects an acknowledgment that even if China's mass lockdowns help to defeat the coronavirus, it would be a Pyrrhic victory if companies collapse, workers go jobless and unrest ensues.

At some point in February, Xi shifted his focus to the economy, encouraging workers to return to work. From then on, it became a two-front war -- protect lives and lift the economy.

Better relations with Japan, the world's third-largest economy, would have put China's diplomatic footing on solid ground, especially amid tensions with the U.S. Eagerness for this potentiality contributed to the delay in China's decision to put off Xi's visit.

Now, however, China has been burdened with "the extremely difficult task of managing the negative aspects of the postponement," one veteran Chinese scholar of Japan-China relations said.

Today, the death toll from the virus is rising sharply outside China, with the U.S. and France as well as many other countries around the globe reporting new confirmed cases and deaths. The international image of China, where the outbreak began, has been significantly bruised.

In Japan, the northernmost prefecture of Hokkaido has declared a state of emergency. In response to a sudden request from Prime Minister Shinzo Abe, elementary, junior high and senior high schools have been closed. While domestic criticism over the outbreak is primarily directed at the Abe administration, there is an underlying grudge against China.

This year is particularly important for Japan as Tokyo will host the Olympics. With a little more than four months left before the opening ceremony, the global spread of the virus is calling into question whether the games will go ahead as planned. With the coronavirus epidemic spreading globally, there is now talk about whether this summer's Tokyo Olympics will go ahead as scheduled. (Photo by Takaki Kashiwabara)

With Xi's visit set to be postponed, China and Japan will have to find suitable dates to reschedule the trip.

It will be difficult to reschedule for May or June, ahead of the Olympics. Autumn or later would be more natural but could collide with Japan's political situation, including the timing of a possible dissolution of the Diet's lower house and a general election.

One also must not forget how a two-month delay in a previous presidential visit ended in disaster.

Coincidentally, that postponement was triggered by a calamity in Wuhan.

But heavy rain in China caused massive floods and widespread damage, including in areas around Wuhan along the Yangtze River and Harbin, Heilongjiang Province, along the Songhua River.

To spearhead the response to the national emergency, Jiang made an announcement on Aug. 21 that he would put off his visit to Japan. The death toll from the floods eventually exceeded 3,600.

This caught Jiang by surprise. As China's leader, he had to have a similar apology from Japan. But Japan rejected the demand. Jiang Zemin shakes hands with the late Keizo Obuchi at the Akasaka State Guesthouse in Tokyo on Nov. 26, 1998.   © Kyodo

According to a Japanese government explanation, South Korea had promised Japan that with this apology, Seoul would never again raise history issues. China had not committed to such a promise and therefore could not be given the same treatment.

Jiang was offended and felt that Japan's less favorable treatment of China was an insult.

At an Imperial Palace banquet hosted by Emperor Akihito, Jiang, clad in a black Mao suit, went on a barrage criticizing Japan's military past.

Jiang's behavior at the Imperial Palace banquet drew a strong backlash from many in Japan, triggering a subsequent deterioration of Sino-Japanese relations that lasted for years. By any account, it was a failed visit.

Regardless of when Xi's visit takes place, careful attention should be paid so that the mistakes of Jiang's visit 22 years ago are not repeated.