The situation in Hong Kong is beginning to remind people of the events that led up to the Tiananmen crackdown in 1989. (Nikkei Montage/ Getty Images)
China up close

HONG KONG -- A man in his 50s could not erase the fear on his face. One of his two sons has been taking part daily in the anti-government protests that have been gripping Hong Kong for four months now.

"To see the youngsters in masks run from tear gas," he said, "it is becoming a little like Beijing 30 years ago."

The father wants to urge his son to exercise more caution. But three decades ago he himself was on Hong Kong's streets, criticizing Beijing's handling of the student protests in Tiananmen Square. He understands the emotions that his son's generation feels today but feels more trepidation now that the Hong Kong government has invoked a colonial-era emergency law giving Chief Executive Carrie Lam sweeping powers.

The dusting off of the law reminds the 50-something father of two events that led up to the Tiananmen crackdown on June 4, 1989.

On April 26, 1989, the People's Daily, the Chinese Communist Party's official mouthpiece, splashed an editorial on its front page headlined, "We Must Take a Clear-Cut Stand Against Disturbances."

The editorial painted what was until then peaceful calls for democracy as "disturbances," in effect defining the student movement as a destabilizing anti-party revolt.

Then, weeks later, on May 20, Premier Li Peng put Beijing under martial law. Hong Kong Chief Executive Carrie Lam appears to be using a ban on masks to draw attention away from the sweeping powers she has asserted.    © Reuters

Fast forward to this past summer. On June 12, after a mass demonstration opposing an extradition law that would allow suspects to be transferred to mainland China, Lam similarly criticized the actions of students as "riots."

Now, months later, an emergency powers law has been invoked.

Media coverage of the emergency law, especially among pro-Beijing outlets in Hong Kong, have focused on the mask ban that Lam put into effect by means of her new powers. But the participants of the protests understand the seriousness of the law itself.

"Isn't this a mini-martial law?" asked one protester. "Next up," said another, "could be a curfew or media restrictions."

The emergency law allows Lam to enact various restrictions on assembly and communications without going through Hong Kong's Legislative Council. There is concern that, depending on the situation, the government could also postpone local elections slated for November.

Herein lies an inconvenient truth: While Hong Kong authorities agreed to cancel the extradition bill in early September, they put in place what could end up being a much tougher law; one that came camouflaged by a mask ban.

Surveillance cameras exist all over Hong Kong that allow authorities to identify protesters most of the time, even when their faces are not visible. Their ability to identify individuals based on body shape, gait, ear shape and optical scans is advancing by leaps and bounds. A full-face contraption could still pose an obstacle, but a regular mask would make little difference.

"The mask ban isn't going to hold back the protests," said a 22-year-old who has been at the forefront of the demonstrations. "I'm sure the Hong Kong government knows this too."

The move has only added fuel to the fire. Droves turned up to unauthorized protests in pouring rain on Sunday, shouting from behind colorful masks for Hong Kongers to fight back. They also had umbrellas in hand, reminiscent of the Umbrella Movement five years ago.

Few had big signs bearing slogans, like they did in June and July. Now the simple act of wearing a mask represents strong dissent against the "mini martial law." Nothing could be easier.

Five months in, Hong Kong's protesters are forming a strong sense of camaraderie. A local musician wrote a song that has become an anthem for the protesters, "Glory to Hong Kong." Lyrics that call for freedom and a somber melody unite the crowds.

While tear gas and water cannons temporarily disperse protesters, these tools are bringing them closer together. Police broke up a major demonstration at the center of Hong Kong island on Sunday, but many participants remained in Causeway Bay, occasionally shouting for resistance.

The protesters are clearly taking things to the next level. The Umbrella Movement five years ago came to an end in four months, partly due to deep rifts between the student groups involved.

Learning from past mistakes, protesters this time around have reached a kind of agreement to keep them from publicly feuding over ideological differences.

The key to sustaining the movement is that more violent, radical factions are coexisting with peaceful ones, those involved say. Each group acts on what they believe, and no single leader is in charge of the various clashes across the city. 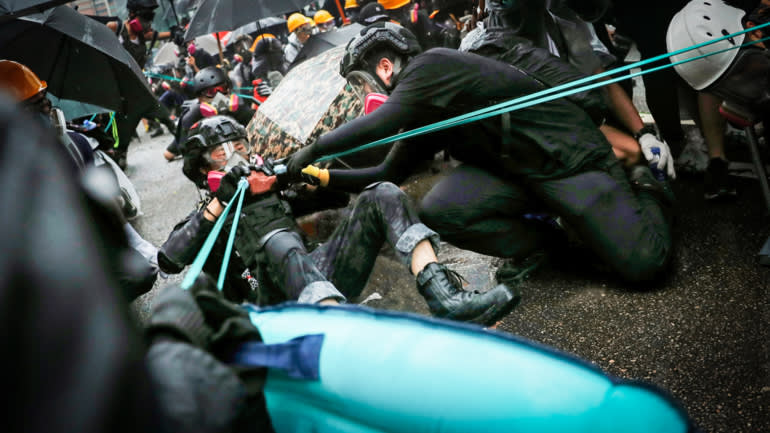 Protesters use an improvised slingshot to hurl a chunk of a brick as they clash with riot police in Hong Kong's Tsuen Wan neighborhood on Aug. 25, 2019.    © Reuters

Deep down, protesters are not afraid of the police. On the ground, they outnumber officers armed with tear gas rounds. The Hong Kong police force has just over 30,000 officers. Even if all of them were deployed in shifts every day, they could not hold back the energized youth.

A 47-year-old veteran cop who lives on Hong Kong Island has been working 15-hour shifts, leaving home at 5 p.m. and returning the next morning at 8. He slept at work three days during the first week of October.

Protests have recently spilled beyond central Hong Kong and into usually calm residential neighborhoods, like Chai Wan and Tai Koo. They have been taking place almost every day and night since Friday, when the emergency law was announced, and are no longer limited to weekends.

Recently, protesters have vandalized not only branches of the state-owned Bank of China (BOC), but also stores run by Hong Kong-based companies deemed too cozy with Beijing. Starbucks Coffee and Genki Sushi have been targeted.

Those are global brands based in the U.S. and Japan, but their Hong Kong locations are run by local operators, and comments by people associated with these companies put them in the firing line.

This code of conduct was reflected in shopping malls where demonstrators peacefully gathered to sing protest songs. Only stores targeted by protesters had their shutters down, while the rest continued doing business as usual.

During clashes in central Hong Kong, protesters have brought in drilling equipment to dig up bricks from the pavement and to use the fragments as projectiles -- something that points to careful planning. The police are straining themselves to the breaking point dealing with such incidents. 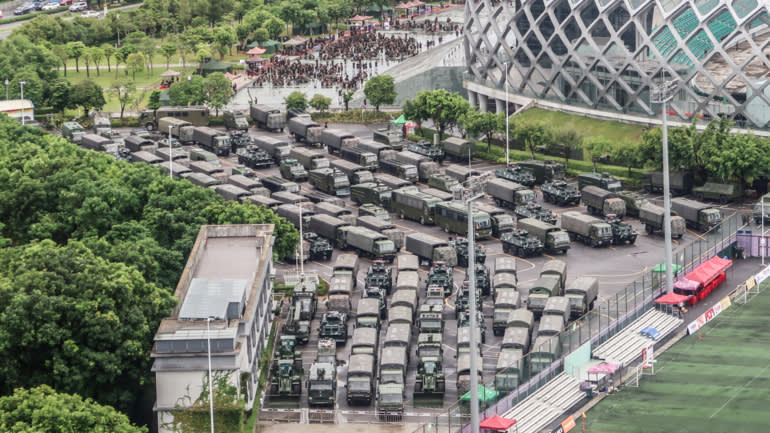 Chinese paramilitary units have been poised in Shenzhen, near the border with Hong Kong, for months now.   © Reuters

But the central government still faces high hurdles to sending in People's Liberation Army troops stationed in Hong Kong, or members of the military-controlled People's Armed Police Force massed across the border in Shenzhen.

Should these forces intervene, the prominent international economic position that Hong Kong has carved out for itself over decades would crumble in an instant. Moreover, it is clear that such a move would seriously damage the mainland's own economy. The U.S. and others in the international community are also keeping a stern eye on the situation.

The demonstrations, far from showing any signs of settling down, have actually expanded. The backlash from the Hong Kong public has been weaker than expected. That the protests have moved into their fifth month shows the deep-rooted distrust and antagonism underlying the movement.

If this continues, an escalation of Hong Kong's mini-martial law with tougher measures cannot be ruled out. The fears of the protester's father who likened the atmosphere to the days of the Tiananmen crackdown may not prove groundless. Therein lies the problem.