On the outside of TPP, Beijing looks west

TOKYO -- After suffering a serious setback in its bid to effectively divvy up the Pacific, China is shifting its diplomatic focus to creating an economic zone linking itself to Europe and Africa by land and sea. 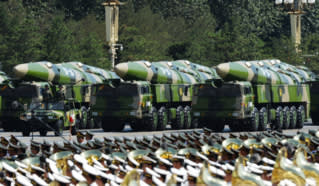 DF-26 ballistic missiles are paraded through Beijing on Sept. 3. (Photo by Takaki Kashiwabara)

China wants to establish a "new Silk Road economic zone" to serve as a counterbalance to the Trans-Pacific Partnership, which brings together 12 Pacific Rim countries. The U.S. and Japan are the two largest economic powers in the free trade deal. A broad agreement on the TPP framework was reached on Monday.