With lightning speed, China has constructed hospitals in Wuhan, but President Xi Jinping will face a mountain of issues going forward. (Nikkei Montage/ Source photo by Kyodo and AFP/ Jiji)
China up close

TOKYO -- If you fold a map of China into four, what appears in its center is Wuhan -- the capital of Hubei Province, a city with a population similar to Tokyo's and the epicenter of the recent coronavirus outbreak.

Former leader Mao Zedong liked to visit Wuhan and stroll along the picturesque East Lake. He did so in 1965, when the Sword of Goujian, an archaeological artifact of the Spring and Autumn period (771-403 BC), was found, intact, with an almost untarnished blade.

Mao's 1965 Wuhan visit came just before the launch of the Cultural Revolution, the decadelong period of political and social chaos that Mao triggered to reassert his control over the Chinese Communist Party.

It was on the banks of the lake that Mao drew up the blueprint of the upheaval and plotted ways to remove his political foes.

Today, Wuhan is a bustling hub of automotive manufacturing.

The Yangtze River, which runs through Wuhan, extends to Shanghai to the east and Chongqing, the military city turned industrial hub, to the west. Wuhan is also the halfway point between Beijing to the north and Hong Kong to the south.

Connected to various other parts of China by a high-speed railway system, the strategic inland transport hub has enjoyed high economic growth of late. Wuhan's per capita gross domestic product tops $20,000, higher than in China's economic engine of Shanghai and close to Beijing's performance. "I never thought that Wuhan's economic bubble would contribute to the global proliferation of an epidemic," said a Chinese national who has lived in Wuhan for many years.

The remark gives valuable insight into the turmoil now shaking the world and speaks to China's position in the age of globalization.

That affluence is one reason why 5 million Wuhan residents fanned out across China and the globe during the Lunar New Year, including nearly 15,000 tourists who flew to Japan from Wuhan Tianhe International Airport.

The fact that so many people were allowed to leave, despite officials knowing that a pneumonialike illness was spreading in the city, speaks volumes about the lack of imagination of the local bureaucrats. It also exposes just how difficult it is to speak out in the current political structure under strongman President Xi Jinping.

On Jan. 27, Wuhan Mayor Zhou Xianwang hinted at the issue in an interview on state TV.

"As a local government official," he told CCTV, "after I get this kind of information I still have to wait for authorization before I can release it."

He was referring to the delay in announcing the possibility of human-to-human transmission, which turned out to be a critical blunder.

It was a bombshell remark, indirectly pointing out that the central government is partly to blame for the mistake.

It also exposed the fierce buck-passing within the party over who was responsible for allowing the epidemic to gain such force. The usual battle lines, between the party leadership, led by Xi, and the State Council, the national government led by Premier Li Keqiang, were put to rest after it was decided that the coronavirus response going forward will be run by Xi, through top-down decree. Chinese Premier Li Keqiang speaks with medical workers at Wuhan Jinyintan Hospital in Wuhan on Jan. 27. The State Council, which Li leads, has been in a constant power struggle with President Xi and his close aides.   © Xinhua/ AP

The decision was made public indirectly through the mouth of visiting World Health Organization Director-General Tedros Adhanom Ghebreyesus.

The CCTV coverage on Jan. 28 reported that in his meeting with Xi, Tedros said that "President Xi's personal guidance and deployment show his great leadership capability."

The significance here is that CCTV referred to Xi's "personal guidance and deployment" -- tacitly admitting that the party's traditional collective leadership system has been replaced by one-person rule.

Furthermore, six days later, the party's Politburo Standing Committee met to discuss the coronavirus outbreak and for the first time admitted to "shortcomings and deficiencies" in the party Central Committee's initial response.

The admission signals a temporary cease-fire in the party's internecine feud. Now that Xi's "personal guidance" has been confirmed -- which is similar to the term "centralized and unified leadership" that Xi has been using lately -- China cannot afford to fail in the future. 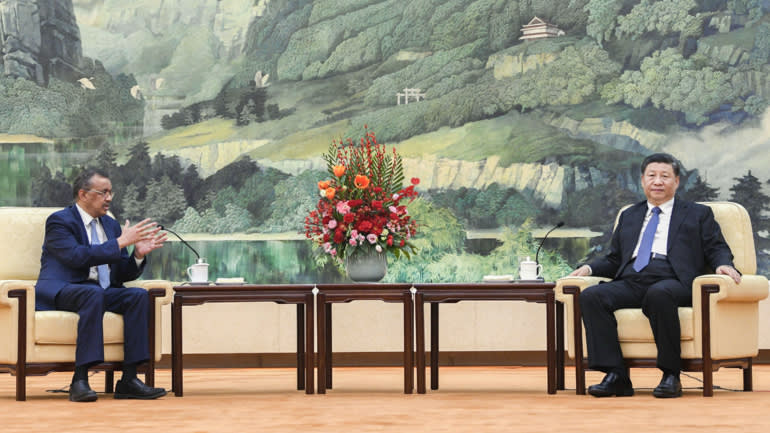 WHO Director General Tedros Adhanom Ghebreyesus meets with Chinese President Xi Jinping before a meeting at the Great Hall of the People in Beijing on Jan. 28.   © Kyodo

But challenges await the Chinese leader.

One reason for Wuhan's affluence was its skyrocketing real estate prices.

A party source in Hubei, speaking on condition of anonymity, said: "Even I have two houses in addition to my own home. Housing prices have quadrupled in the past two years. I can earn a considerable amount of income just by renting one out."

While the source did not reveal the assets' value, the number of rooms in the properties suggests they are each worth somewhere in the ballpark of $1 million to $2 million.

But with the coronavirus epidemic, it does not take an expert to guess that asset values will decline.

It will affect the likes of Hubei Daily Media Group, the publisher of the Hubei Daily, the party's mouthpiece in the province. The company's head office sits in a prime location overlooking the Yangtze River.

Perhaps not known to the local public, the media group completely relies on its property business for profits -- a result of dwindling circulation and advertising revenue. A fall in real estate values would be another unwelcome blow to the company. 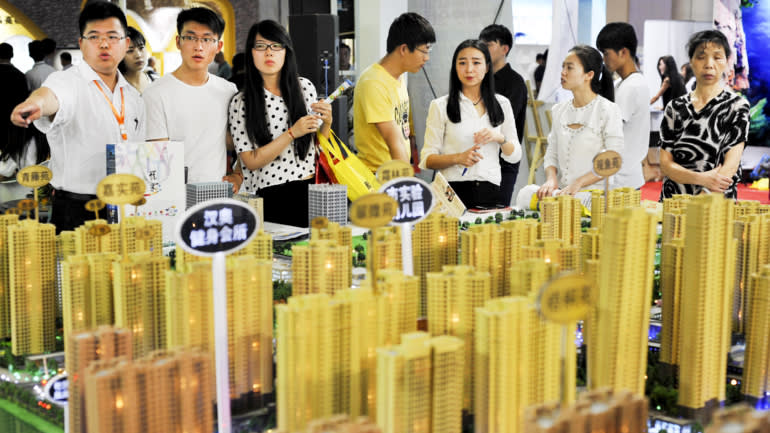 Sales representatives talk to potential buyers in front of a model of a residential complex at a real estate exhibition in Wuhan.   © Reuters

And the epidemic will further dent investment from abroad.

Already, the stock market is reacting. Earlier this week, Shanghai shares logged a historic decline, partly due to the WHO's declaration that the outbreak constitutes a "global health emergency."

Wuhan sits at an important junction in China's Belt and Road Initiative, the massive infrastructure undertaking designed to smooth trade and logistics between China and Europe. International freight trains run between Wuhan and its longtime friendship city Duisburg, Germany. But the epidemic will also negatively impact the infrastructure drive.

Wuhan's position as a strategic transport hub has backfired and worked as a negative factor. Wenzhou, a coastal city in Zhejiang Province, to the east of Hubei, on Sunday began confining people to their homes as the number of infections increased.

How the epidemic spreads in Chongqing, to the west, is also a concern. Like Wuhan, the megacity in southwestern China serves as a terminus for international freight trains. It also plays an important role in the Belt and Road campaign.

Is top-down governance the way forward? Will local officials be able to speak freely of the problems at hand and make quick, effective decisions?

Amid calls for "centralized and unified leadership," the people on the front lines trying to tame the coronavirus epidemic are given little breathing room.