U.S. President Donald Trump spoke these words on Tuesday as he described the Chinese leader's meddling with the U.S.-North Korea summit.

It was a prelude to Trump canceling the summit two days later.

The American leader had similarly expressed his displeasure toward Xi Jinping in a tweet. "The word is that recently the Border has become much more porous and more has been filtering in," Trump said, referring to the boundary between China and North Korea.

The cooperation between Washington and Beijing to stem the flows of goods and people across the border came to symbolize the warming relations between Trump and Xi. The trust had led the two to agree that if a U.S. military strike on North Korea were to take place, and a war were to erupt, it would not lead to a confrontation between the world's two major powers.

Trump's tweet was an expression of annoyance that this understanding had been broken.

Beijing dismissed the claim. "China has always strictly followed and fulfilled its due international obligations," Lu Kang, a spokesman for the Chinese Ministry of Foreign Affairs, said in response to Trump's words. But reporters who have visited the border have witnessed North Korean workers flow back into China and that the trade in goods is recovering.

Proof is in the rise of real estate prices in the Chinese city of Dandong, on the banks of the Yalu River, which serves as the border with North Korea. A similar trend can be seen in the Yanbian Korean Autonomous Prefecture, further up the river.

It is not hard to imagine that the State Department, the Pentagon and the Central Intelligence Agency have informed Trump of these developments. The flow of people became increasingly apparent after Xi's second meeting with Kim in Dalian on May 7-8.

One consequence of the American-Sino cooperation in the border region was that Kim Jong Un pivoted to talks with the U.S.

It was the Chinese side that had approached the U.S. about clamping down along the border. "The two major players of the world can join hands and solve this global issue," the tie-up suggested.

Beijing chose U.S. Ambassador Terry Branstad as its counterpart for negotiations due to his closeness to Trump. In November 2017, the Chinese government invited Branstad to the Yanbian Autonomous Prefecture to see the border with his own eyes.

It was Branstad's second visit to the China-North Korea border, following a trip in September. He has since visited Dandong as well. The Ambassador's frequent visits to the border did not go unnoticed by officials in Pyongyang. In February, Kim made his move. Using the Winter Olympics in South Korea, he embarked on a mission to befriend Seoul. This led to a proposal to meet the U.S. president.

But preparations for a U.S.-North Korea summit were moving too fast for China's liking. Xi feared that Trump and Kim would become so close that China would not have a say in the future of the Korean Peninsula.

Xi saw a fast-moving train and decided he needed to pull the brake lever. In late March, he invited Kim to Beijing.

The cooperation with the U.S. along the China-North Korea border began to crumble.

To Trump, Xi's move came as unexpected interference. Here he was, waiting to become the first global leader to tame the dictator, Kim Jong Un, and Xi swoops in to steal the show. If that were not enough, Xi in early May invited Kim back to China, this time to Dalian.

In the seaport city in the south of Liaoning Province, Xi told Kim that the "traditional friendship" between China and North Korea has been a "treasure" for both countries and the "only correct choice" for each.

A source familiar with China-North Korea relations explained this was a signal that the flows of people and goods would resume. "It was a completely different message from a year ago," the source said. Xi also gave his blessing to a "phased and synchronous" approach toward denuclearization. It was around this time that Xi's right-hand man, Wang Qishan, the anti-corruption czar during Xi's first five years in power, emerged as the new signal caller for foreign policy.

On the morning of May 15, one week after the Dalian rendezvous, Wang, now China's vice president, attended the first meeting of the Communist Party's central commission for foreign affairs. The commission, the result of a party and government reorganization, serves as the foreign policy command center.

It is safe to say that Wang Qishan now serves as the de facto commander of China's diplomacy.

The first meeting of the central commission for foreign affairs on May 15 coincided with Vice Premier Liu He's departure for the U.S. Liu, a close aide to Xi, was on a mission to help China avoid a trade war with the U.S. 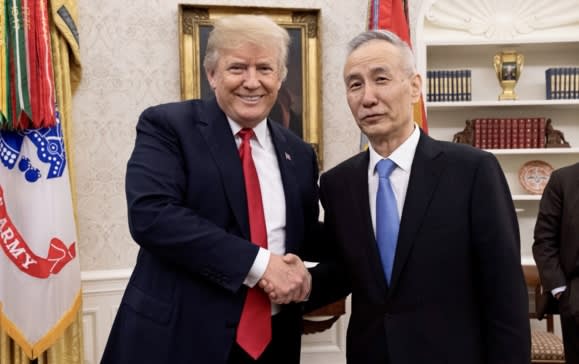 While Liu is the lead negotiator, Wang, the strategist, has all the power. Liu has never been at the forefront of rough-and-tumble negotiations.

For Wang, the bigger issue to deal with is North Korea's nuclear program.

Trump perceives one deal where others might see two issues -- slashing the U.S.'s gaping trade deficit with China and convincing North Korea to abandon nuclear weapons.

This is forcing Xi to think about U.S. trade and the North Korean nuclear issue in tandem, all while trying to guess as to what Trump might be thinking. It is also giving more weight to the Chinese Communist Party's central commission for foreign affairs.

Wang Qishan's thinking could have affected how the summit fiasco of last week played out. One day, an aide to South Korean President Moon Jae-in was calling the summit a 99.9% certainty. On Thursday night in Washington, Trump canceled the summit. But by Saturday he was talking as though it could go ahead as scheduled.

On Thursday, Wang traveled to St. Petersburg to attend an economic conference. There he met Russian President Vladimir Putin.

"President Xi highly values the St Petersburg International Economic Forum, and that is why he sent me to SPIEF as China's representative," Wang said, according to the Kremlin.

His words portray Wang's close connection to the Chinese leader. The discussion centered around the Korean Peninsula.

Putin will travel to China in early June to attend the Shanghai Cooperation Organisation summit in Qingdao. The meeting of the leaders of China, Russia, India and five Central Asian nations would be days ahead of the original date for the Trump-Kim summit, June 12. Wang is the key player in China-Russia relations as well.

In St. Petersburg, Wang said a summit between the U.S. and North Korea is "necessary" to ensure security on the Korean Peninsula.

Wang's words were carefully scripted to avoid having Trump blame China for the collapse of the summit. As long as it is in the know, China is fine with such a meeting taking place, especially now that China believes Kim is squarely in its court.

With Trump apparently preparing to meet with Kim after all, China, under Wang's direction, will be a key player. Wang could even fly to the U.S. ahead of June 12.