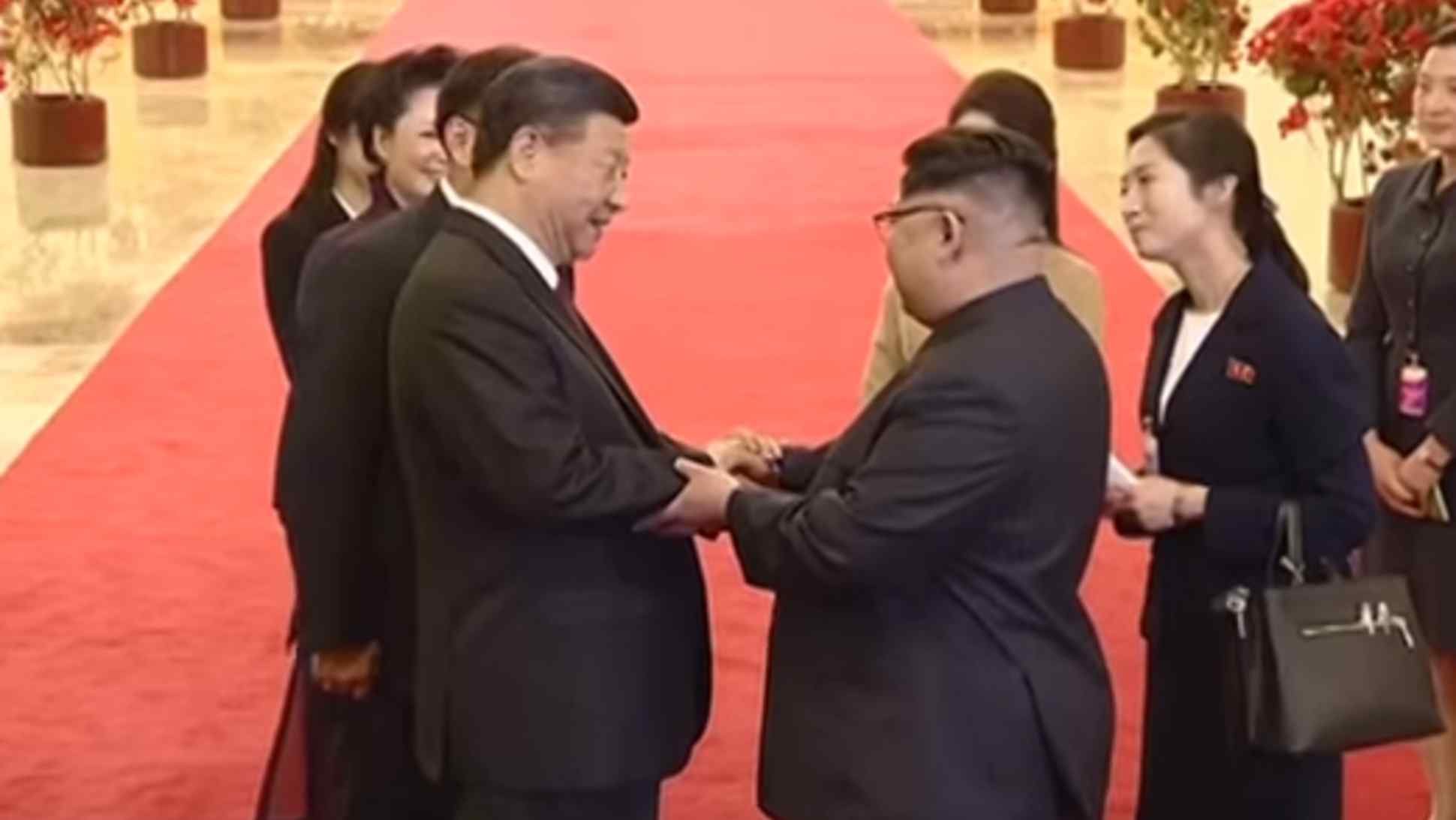 Beijing-Washington tariff tussle is a battle for future supremacy

"People have to understand why Xi talked to Kim about 2035, and what it means in the context of the power struggle between the U.S. and China," said a source familiar with Chinese politics and China-Korea relations.

The state-run Xinhua News Agency's official report about the Xi-Kim summit is a treasure trove of clues of what is going on between the two countries.

One example is the following sentence:

"The two sides informed each other of their respective domestic situation."

It signals that Xi and Kim have dusted off an old tradition that China and North Korea engaged in for many years; to "inform" each other's long-term development visions.

And it was in this context that Xi raised the year 2035.

That blueprint comprises of "building a moderately prosperous society in all respects by 2020, having basically achieved modernization by 2035 and building a great modern socialist country that is prosperous, strong, democratic, culturally advanced, harmonious, and beautiful by the middle of the century."

It is what is known as the Project 2035, a plan to catch up and overtake the U.S. by 2035, at least in economic terms. Once that is achieved, Beijing envisions a grand goal of becoming a global leader that is mightier than the U.S. in both economic and military terms by the middle of the century. Xi, second from left, and his aides look to the year 2035 as the year to overtake the U.S. economically.

Xinhua did not report about how Kim informed Xi of his country's long-term plans.

After years of growing increasingly estranged, China and North Korea are suddenly acting like best friends again, locked in an embrace while constantly looking over their shoulders to see if the U.S. is watching.

It most certainly is.

Xi gave Kim a red-carpet welcome and showered him with gifts during the North Korean leader's surprise March 25-28 visit. It was Kim's first overseas trip since coming to power in late 2011, and came after years of souring ties between the two governments.

It also occurred as U.S. President Donald Trump is ratcheting up pressure on China over trade and on North Korea over its nuclear and missile development programs.

Beijing and Pyongyang used to boast about having a "friendship cemented in blood" -- Chinese troops fought for the North during the Korean War.

The big question is: What is Xi's reason for sharing China's long-term development vision with Kim?

Xi and Kim have many differences, not least of which is their 30-year age gap, but they share one peculiar similarity: the status of "leader for life." The National People's Congress, China's rubber-stamp parliament, adopted constitutional amendments on March 11 that scrapped a clause allowing a Chinese president to serve a maximum of two five-year terms.

Across the border, Kim has been leader for life since late 2011, when his father Kim Jong Il died.

Perhaps Xi, in his meeting with Kim, wanted to convey the message that he is someone to be trusted and will not budge from office until China overtakes the U.S. economically in 2035.

Xi harbors a thinly veiled ambition to go down in Communist Party history as a great leader on a par with Mao Zedong, who led the country to communism. The math works out neatly: The 64-year-old Xi will turn 82 in 2035. Mao died at age 82.

The Chinese president probably had another message for his visitor: "You are young. Don't you think it would be wiser to follow China, a nation that will soon be the world leader, than to gamble on a deal with Donald Trump, who can only serve two terms?" U.S. President Donald Trump displays an executive order imposing sanctions on China. His tough stance on trade has raised the specter of a full-scale trade war between the economic giants. (Reuters photo)   © Reuters

Trump must have been watching uneasily. Shortly after the Xi-Kim meeting, Trump raised the specter of a full-scale trade war between the world's two biggest economies, sending jitters through global markets.

On April 3, the Trump administration, citing unfair Chinese trade practices, released a draft list of 1,300 Chinese products worth $50 billion that will be subject to punitive import tariffs of 25%.

Two days later, Trump declared that he was considering boosting the figure by an additional $100 billion.

The Office of the U.S. Trade Representative said the items on the tariff list were selected based on Beijing's "Made in China 2025" plan -- a long-term strategy for upgrading the country's manufacturing sector and transforming China from a "manufacturing giant" into a "manufacturing power."

The plan covers everything from semiconductors and artificial intelligence to robots and aerospace.

In an interview with Bloomberg Television on March 28, Peter Navarro, a White House adviser and director of the Office of Trade and Manufacturing Policy, attacked the plan, saying: "China, in my view, brazenly has released this China 2025 plan that basically told the rest of the world, 'We're going to dominate every single emerging industry of the future, and therefore your economies aren't going to have a future."'

How, then, must he feel about the 2035 vision, which relies heavily on the success of the 2025 plan?

From Kim's perspective, the timing of his China visit could not have been better. It is reminicent of the path China took under Mao Zedong in the 1970s.

Beijing and Moscow were locked in a fierce rivalry, partly borne of their desire for supremacy in the socialist world. China shocked the world by extending a hand to the U.S., which it had until then bashed as the "imperialist" nation. U.S. President Richard Nixon visited China in 1972 and paved the way for normalization of diplomatic ties.

It was classic case of an ancient Chinese military strategy "yuan jiao jin gong" -- befriending a distant state (the U.S.) to attack a neighboring one (the Soviet Union).

What enabled Mao to be so bold was China's successful acquisition of nuclear bombs, hydrogen bombs and intercontinental ballistic missiles.

Caught by surprise, the Soviet Union found itself under a pincer attack from the U.S. and China and eventually collapsed in 1991.

Kim's recent moves regarding nuclear, hydrogen and ICBM tests follow Mao's playbook. If Kim were to suddenly embrace Trump, this time it would be China that is double-teamed.

For Xi, the worst case scenario would be for the geopolitical power game that was triggered by movements on the Korean Peninsula would unfold with China watching from the outside. Bringing Kim back on China's side was an absolute necessity.

In that sense, Xi was in no position to reject Kim's proposal of a "phased" approach to denuclearization.

During his meeting with Xi, Kim said he was prepared to go back to the long-stalled six-party talks between China, the U.S., Japan, Russia, South Korea and North Korea. That too was a welcome move for Xi, for China is the host of the talks and is guaranteed a central role.

But as always, there are complications. The U.S. has just launched a strike on Syria, warning Russia not to back the Assad regime. Washington and Beijing may be on the verge of a full-blown trade war. Beijing and Moscow are holding talks behind the scenes. Japan has not ruled out the possibility of a summit between Prime Minister Shinzo Abe and North Korea's Kim.

The political maneuvering continues in large part because nobody knows what Kim Jong Un really intends to do with his nuclear weapons. Thus the diplomatic chess match among the six protagonists rages on.

The one thing to watch next, as we wait for the historic Trump-Kim meeting, is whether Kim will make a further leap towards Trump, leaving Xi in shock.