The country's current leaders and Chinese Communist Party elders gather every summer for the closed-door "Beidaihe meeting" to informally exchange views on the state of the party and the country.

The start of the meeting is never announced. Instead, a short Xinhua News Agency article appears out of the blue, saying one of the leaders has been spotted in Beidaihe. And with that, China watchers around the world understand that the big event is underway.

This year's article on Aug. 4 said Vice Premier Hu Chunhua -- once seen as a rising star and potential successor to President Xi Jinping, who doubles as party chairman -- was attending a symposium.

Beidaihe long served as a summer retreat for Chinese emperors, and over time a tradition developed. Whenever the emperor went on vacation, retired sages would join, and the entourage would spend the time exchanging opinions. The custom lives on, and to this day, party elders have a disproportionate weight in critiquing or endorsing a junior. Some parts of Hebei Province's Beidaihe beach resort are off limits except to high-ranking party and government officials. A police officer directs traffic ahead of this year's big meeting on August 2.   © Kyodo

This is why the annual Beidaihe meeting is significant, and exasperating, for the incumbent leader. Many times it has affected developments in Chinese politics for the following year.

This summer's meeting comes amid China's escalating tit-for-tat trade war with the U.S. As if to drop a bombshell on the eve of Beidaihe, U.S. President Donald Trump on Aug. 1 instructed his trade officials to consider raising to 25% the proposed 10% tariffs on $200 billion worth of Chinese imports.

Xi reportedly has been looking exhausted. Two days after returning from a 10-day tour of the Middle East and Africa, the president convened a meeting of the party's Politburo to prepare for further escalations of the trade war. According to Xinhua, participants concluded that the external environment has "significantly changed" and the nation should roll out targeted measures to solve the problem.

The next day, Trump raised the stakes, likely surprising Xi with the new 25% tariff rate.

Some say Trump increased the rate out of the belief that China is guiding the yuan lower to boost its exports. While the 25% tariff move dominated headlines, the U.S. government made another announcement the same day that did not get nearly as much notice.

The Department of Commerce added 44 military demand-related Chinese companies, including the state-owned China Aerospace Science and Industry Corporation, or CASIC, to its export control list. This, more than the new tariff rate, is said to have triggered the Chinese stock tumble.

Under these circumstances, Chinese Foreign Minister Wang Yi on Friday met with U.S. Secretary of State Mike Pompeo in Singapore.

When asked by reporters for a response to Trump's new tariff rate, Wang gave a rather soft response. "The trade friction between the two countries should be resolved through talks," he said

Back in Beijing, a few hours later, China's Ministry of Commerce announced that it was preparing retaliatory import tariffs on $60 billion worth of American products, including liquefied natural gas.

Wang appeared a different man the next day. Speaking to Chinese media, the foreign minister said, "If the U.S. attacks us, we will only fire back."

The lack of unison in the statements and Wang's sudden change of attitude gave the impression that China was having difficulty getting the entire team -- scattered from Beijing to Beidaihe to Singapore -- to run the same play.

Past Beidaihe meetings have been relaxed affairs. Foreign leaders visiting Beijing in August would be whisked to the seaside resort to meet with Chinese leaders. In 1998, Japan's then Foreign Minister Masahiko Komura held a lengthy meeting with Chinese President Jiang Zemin at the summer retreat. Chinese President Jiang Zemin, left, shakes hands with Japan's then Foreign Minister Masahiko Komura in the relaxed atmosphere of Beidaihe in the summer of 1998.

Such generosity is less frequent these days due to the increasingly closed nature of China's politics, although August continues to be a special month on the political calendar.

While China has vociferously threatened to retaliate against U.S. sanctions on a similar scale, the truth is China imports much less from the U.S. than the other way around. This is why Trump has said the U.S. "can't lose" a trade war with China.

China could resort to non-tariff measures, such as restrictions on U.S. investments. But this would backfire, and capital inflows would slow.

The world's No. 2 economy, which holds huge amounts of U.S. government bonds, could also begin selling these off. But this would invite further sanctions from Washington, and Xi is already wavering.

In Beidaihe, Xi has to deal with another controversy: He seems to be taming a cult of personality around himself that is technically banned by the party.

This time last year, a political earthquake shook China's political landscape ahead of the Beidaihe meeting. Sun Zhengcai, a Politburo member and Chongqing's top official, fell from power on July 15. Sun had once been tipped as the front-runner in the race to one day step into Xi's shoes as China's top leader.

The purging of Sun set the stage for Xi to later concentrate political power -- and made it clear there would be no anointing of a successor at the party's national congress in the autumn of 2017.

It also emerged at last summer's Beidaihe gathering that Xi's eponymous, and still sketchy, ideology would likely be enshrined in the party's constitution, also in the autumn. 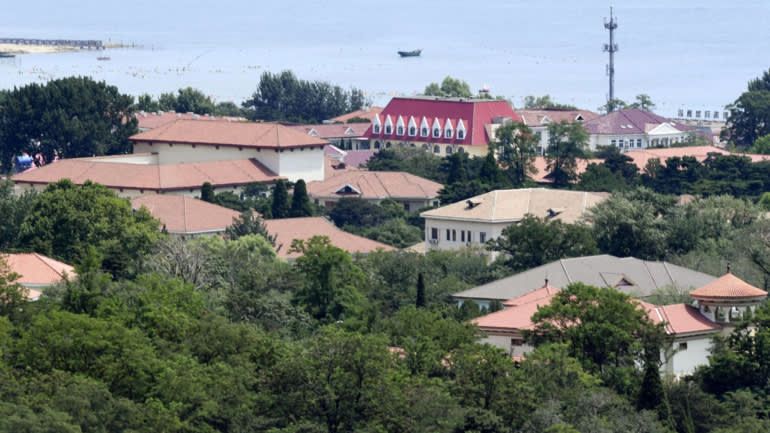 Months later, during the national congress, "Xi Jinping Thought on Socialism with Chinese Characteristics for a New Era" did make its way into the party constitution.

What was not discussed at last year's Beidaihe retreat was Xi's ambition to revise the nation's constitution by removing the two-term limit on the presidency. When Xi this past spring succeeded in this maneuver, he ensured that he would remain in office indefinitely. The change was bulldozed through the National People's Congress, China's parliament, with little opposition.

Party elders felt blindsided. Now, in Beidaihe, they have the opportunity to register their opposition to Xi's power play, and they are expected to do so by raising the alarm against the cult of personality that is building up around the president.

As if in anticipation of such a response, there have been moves within the party to curb signs of the cult.

"It is unclear whether Xi ordered the moves of his own accord or was forced to accept them in the face of pressure from rival forces," an elderly party member from Shanghai said. But "the domestic political issue within our party is now drawing global attention."

Business executives around the world are paying attention to the Beidaihe meeting, partly because it comes amid Trump's new round of high-profile China bashing.

Some overseas Chinese-language media outlets recently reported that Xi might have fallen into political danger, his authority at home being shaken.

According to these reports, former presidents Jiang Zemin and Hu Jintao, who are known not to like each other, have joined hands. Along with former Premier Zhu Rongji, they are said to have registered misgivings with the party's Central Committee. Former presidents Hu Jintao, left, and Jiang Zemin were photographed shaking hands at the Great Hall of the People in Beijing in 1999, with former Premier Zhu Rongji in the background.

Xi, though, is not showing any signs that his footing might be unsteady. In late July, he left Beijing's Zhongnanhai leadership compound for a long overseas trip. This would have been politically risky had he been on shaky ground.

While Xi's strength probably has not been eroded, it is true that China's political winds have subtly shifted.

Where there is smoke, there is fire, and this one has originated in an unexpected place. "It has come mainly from enlightened princelings who have lived in the U.S. and Europe," a party source said.

Princelings are the children of prominent and influential senior party officials. These blue bloods, who have the ability to convey their views within the party, do not fear Xi, at least not excessively.

Xi himself is a princeling and a "second-generation red." His late father once served as vice premier.

Second-generation reds are a smaller number of children of revolutionary-era party leaders.

Surprisingly, Xi last October did not promote fellow princelings at the party's national congress. Instead, he surrounded himself with former subordinates. This has created friction with Xi's fellow princelings over the personality cult issue.

As things stand now, Xi has room to breathe; he has significantly consolidated his power in the past year and has paved the way for an extended reign, possibly for life.

He intends to barrel ahead until the party's next national congress, in 2022, creating a personality cultlike atmosphere while being careful not to clearly run afoul of the party constitution.

But greed could trip up Xi and arm his political foes, which probably is why he has chosen to put his momentum on pause.

In China's world of dog-eat-dog politics, though, even this strategy is risky. Xi could find himself unable to hit the "play" button again. Therefore, it is particularly important for him to properly deal with famous party elders, who can call on Xi's fellow princelings.

But Xi did not hesitate to bare China's claws after he came to power as party chief in the autumn of 2012, eschewing a diplomatic style that had been handed down from the time of supreme leader Deng Xiaoping.

When it was Xi's turn, he immediately began pursuing a "great power" foreign policy and pushing China to catch up with the U.S. economically sooner than previously planned.

The result is today's trade war.

Jiang, Hu and Zhu all have something to say to Xi about the current situation. All three took pains to stabilize Sino-U. S. relations. Their message to Xi probably goes, "You should not go too fast. You should handle the situation better."

It is possible that Xi will tweak his "great power" policy out of consideration of party elders at this year's Beidaihe retreat.

The escalating tit-for-tax trade war has Xi wavering, and he may redeploy China's time-honored hidden claws strategy, albeit ostensibly.