Fragments of information from Chinese state media signal that this year's Beidaihe meeting is going on for longer than usual and that President Xi Jinping may be facing criticism for his policies.   © Reuters
China up close

TOKYO -- Not unlike the Papal Conclave convened to elect the Pope, China's annual summer gathering at the beach resort of Beidaihe, in Hebei Province, is cloaked in secrecy.

Incumbent leaders, headed by President Xi Jinping, are said to face retired party elders at Beidaihe, to hear their views on the state of the nation. Few if any official news reports come out of the gathering.

Whereas the only clue to whether the cardinals have reached a consensus over the next Catholic leader is the black or white smoke rising from the Sistine Chapel chimney, the only clues given to China watchers about Beidaihe are fragments of news sent out by the state media.

This year, the chimneys of Beidaihe are busy letting out more smoke than usual. On Monday, the website of the National People's Congress, China's parliament, reported that the country's No. 3, Li Zhanshu, the chairman of the NPC, had visited a facility in Beidaihe.

This followed reports on Xinhua News Agency that Premier Li Keqiang had received a foreign visitor at Beidaihe on Aug. 3, and a separate Xinhua story that said Politburo members Chen Xi and Hu Chunhua were in Beidaihe the week before. Cardinals enter the Sistine Chapel to begin the conclave in order to elect a new Pope in 2013. Shut off from the outside world, the 115 cardinals cast their ballots in a chapel which has Michelangelo's soaring Last Judgment on one wall.   © Reuters

All told, the signals hint that this year's Beidaihe is going on for longer than usual. If rumors are correct, Xi could be facing heavy criticism for his handling of the trade war with the U.S. and for his unprecedented measures to consolidate power.

The behind-the-scenes tug-of-war at Beidaihe is symbolic of the wider blood-and-guts power struggles within the Chinese Communist Party. Recently, a source with direct knowledge of such power struggles spoke in Tokyo and shared an account of a conversation that happened four decades ago.

The speech came last month, at a symposium held at a Tokyo hotel, marking the 120th anniversary of former Chinese Premier Zhou Enlai's birth and the 40th anniversary of the Sino-Japanese peace and friendship treaty. It was delivered by Zhou's last secretary, Ji Dong.

Ji revealed an episode that happened in Beijing's Zhongnanhai complex, where China's leaders are based, in 1974, during the course of the Cultural Revolution.

The anecdote tells of two persons. One is Zhou, who was in poor health at the time and knew his life expectancy was catching up with him. The other is Geng Biao, who hailed from the military and at the time was heading the Chinese Communist Party's International Liaison Department, in charge of the party's diplomacy.

Zhou was a rare politician. He became the first premier of the People's Republic of China and stayed in the post until his death in 1976. He managed the feat while working with Chinese dictator Mao Zedong, which put him under great strain. Ji Dong, the last secretary of China's first premier, Zhou Enlai, relates a story from the Cultural Revolution to a Tokyo audience.

One night, Geng visited Zhou's office. He had grown exhausted and was starting to buckle under the constant fire from Mao's henchmen, primarily over the foreign policy initiatives he was taking amid the storm of the Cultural Revolution.

He told Zhou, "I want to resign already."

According to Ji, "being crushed" meant choosing suicide.

During the Cultural Revolution, many politicians and bureaucrats chose death after suffering humiliation and growing pessimistic about their futures.

Zhou's survival strategy was born amid a power struggle that was driving others to madness. It was also likely a philosophy Zhou had imposed on himself.

By a curious coincidence, Ji revealed this tale in front of Geng's daughter, Geng Hong, who was among those who proposed the Tokyo symposium.

Even in the midst of the Cultural Revolution, China took steady steps to expand its international influence and to normalize its diplomatic relations with the U.S. and Japan. 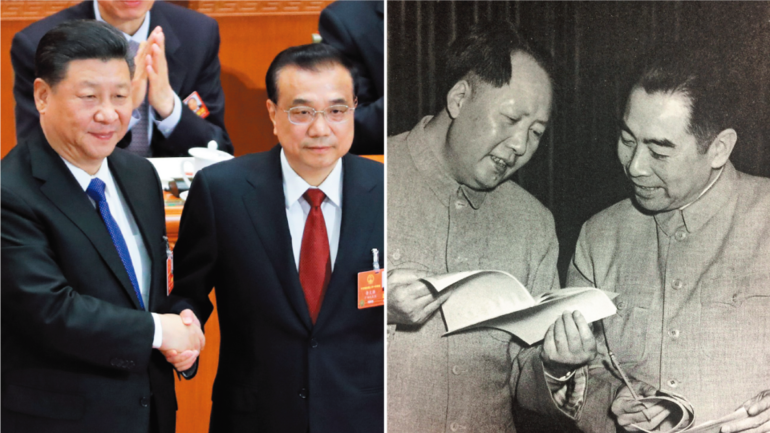 The philosophy of survival espoused by Zhou Enlai, far right and pictured with Mao Zedong in 1953, might have been handed down to President Xi Jinping, photographed with Premier Li Keqiang this past March.

The Chinese premier was well-versed in Japanese affairs. When he was 19, he studied Japanese at a school in what is now the Kanda-Jinbocho area of Tokyo.

Zhou attended a school related to what is now Hosei University as well as Meiji University in Tokyo, where he came across a breath of socialism.

Initially, Zhou's status within the Chinese Communist Party was higher than Mao's. But Zhou would go on to support and be loyal to Mao, who founded the People's Republic of China, became a national hero and survived power struggles.

Zhou lived out his life as a party stalwart, never falling from power despite always traversing a knife's edge. Zhou's toughness earned him the nickname budaoweng, a weighted doll that always bounces back whenever knocked down.

Mao also died in 1976, eight months after Zhou. The Cultural Revolution ended with Mao's death. The Treaty of Peace and Friendship between Japan and China was signed in 1978.

Chinese economy loses footing ahead of trade war with US

Geng Biao weathered the storm of the Cultural Revolution. He rose through the ranks, assuming the posts of vice premier, secretary-general of the Central Military Commission and defense minister.

When Geng was serving as the military secretary-general, he began to develop a personal relationship with a young Xi Jinping. After Xi graduated from Tsinghua University in 1979, he became Geng's secretary.

Xi's late father, Xi Zhongxun, once served as vice premier. Like Geng, the elder Xi was persecuted during the Cultural Revolution. Xi's father made a comeback after the tumultuous period and trusted Geng to mentor his son. 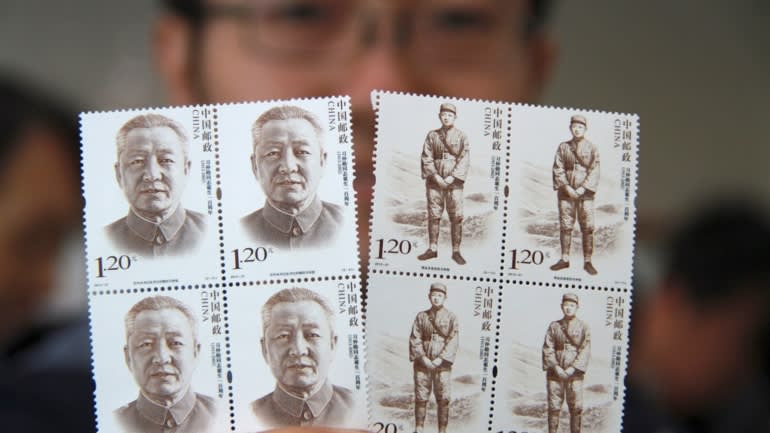 Xi Zhongxun, a former vice premier and the father of Chinese President Xi Jinping, was featured on a set of postage stamps that were issued in 2013 to mark the 100th anniversary of the elder Xi's birth.

Being Geng's secretary was a valuable experience.

As the Central Military Commission's secretary-general, Geng was in effect managing the military. While working as Geng's right-hand man, Xi picked up knowledge about military deployments, personnel affairs and how to move troops.

Xi served as Geng's secretary, but he was also a service member, not a civilian. Xi, who doubles as the party's general secretary, has an unusually long military background for a Chinese leader.

Xi's long military background, going back to his time as Geng's secretary, provided the current president with some powerful ammunition that helped him take control of the military after assuming the top party and military posts in the autumn of 2012.

China is no longer in a life-or-death political situation like it was when Zhou passed along his three precepts to the beleaguered Geng. Yet some refer to Xi's fierce anti-corruption campaign as "a mini cultural revolution." Indeed, it is somewhat reminiscent of the Cultural Revolution, which Mao launched as part of his own power struggle.

Many dignitaries have fallen from power and been ensnared by Xi's mini cultural revolution. The question here is whether Xi heard Zhou's survival maxims while he was Geng's protege.

When Geng died in 2000, Xi was serving as governor of Fujian Province. Xi picked up the remains of Geng's cremated body along with the deceased's son. The Xi and Geng families are bound by a relationship of trust.

It would be no surprise if Xi was told of that one night in 1974, when Zhou played sage to Geng. Xi has fought rampant corruption in the military, where even general officer posts were often bought and sold for huge sums of money. Xi's way of thinking resonates with the behavioral principles of never bowing to pressure and never retreating.

But Xi is contravening Zhou's teachings with his mini cultural revolution as well as with the personality cultlike atmosphere he is allowing to take shape around himself.

In March this year, Xi pushed through a revision to China's constitution, scrapping a clause allowing a Chinese president to serve up to two five-year terms. The edit makes it possible for Xi to remain president for the rest of his life.

Word of how Xi's tug-of-war with party elders played out in Beidaihe will begin leaking out on a piecemeal basis a few months from now, if past experience is any indication.

Will Xi continue concentrating power in his hands in a similar manner to Mao? The party general secretary is already eyeing the CCP's next national congress, in 2022. He will be 69 by then, which will put him up against a long-standing party rule requiring those who have reached the age of 68 to retire without assuming any new posts.

If Xi seeks to stay No. 1 by violating the rule, rival forces will not stand idly by. A red-hot and dangerous political battle will break out.

The summer of 2018 may be remembered as the turning point.