When Xi Jinping, right, in early January addressed his “compatriots in Taiwan” he could not have foreseen how the island would harden against his proposal for a "one country, two systems" style unification. (Nikkei Montage/ Getty Images/ Reuters)
China up close

TOKYO -- After spending many years as an official in China's Fujian Province, across the waters from Taiwan, President Xi Jinping has strong personal feelings about the self-ruled island.

It is, therefore, alarming that President Tsai Ing-wen rejected outright Xi's views toward the future of Taiwan, doing so while stopping over in New York last week.

"Hong Kong's experience under 'one country, two systems' has shown the world, once and for all, that authoritarianism and democracy cannot coexist," the 62-year-old Taiwanese leader declared during a speech at Columbia University on Friday.

Tsai was transiting, on her way to visit Taiwan's diplomatic allies in Central America and the Caribbean.

The "one country, two systems" formula was proposed by Xi in his New Year's speech. Xi, who doubles as chief of the Chinese Communist Party, described the formula as the "best way" toward "peaceful unification." 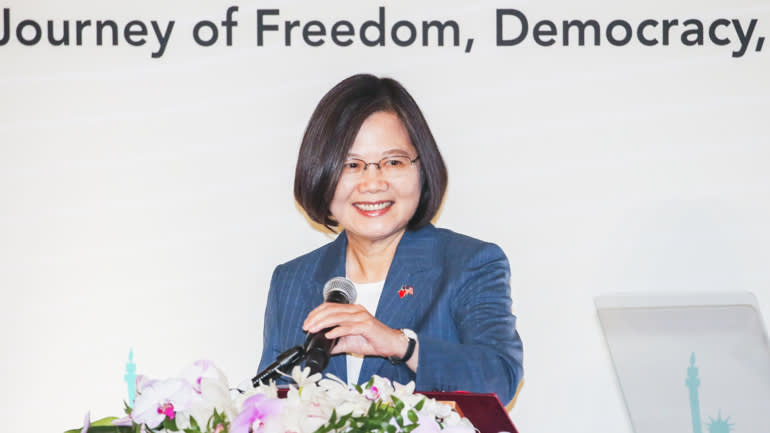 Tsai Ing-wen attends a banquet with Taiwanese expats in New York on July 12. The Taiwanese president has turned around her fortunes in the past six months.   © Kyodo

"That Tsai issued a strong rejection of Xi's proposal, at the home of freedom and democracy, the U.S., is significant," said a Taiwanese scholar specializing in international politics.

The intellectual went on: "It is becoming increasingly clear that the presidential election in Taiwan in January 2020 will become a proxy war that will be a mirror of the fierce U.S.-China battle for hegemony."

With the situation in Hong Kong casting a long shadow over Taiwan, "We will not know until the very end what the outcome will be."

On Monday, the opposition Chinese Nationalist Party, also known as the Kuomintang or KMT, which is conciliatory toward China, announced that Han Kuo-yu, the 62-year-old mayor of Kaohsiung, had won the party's presidential primary.

Han's rivals included Terry Gou, the 68-year-old former chairman of Foxconn Technology, the global contract manufacturer. Han will square off against Tsai, the sitting president and candidate of the pro-independence Democratic Progressive Party, or DPP.

The chain of events leading up to the Tsai speech began in Beijing's Forbidden City, the former imperial palace, where Chinese emperors once lived. In November 2017, the visiting guest, U.S. President Donald Trump, turned to his host and said "President Xi, you are king for life."

Xi had been planning, but had not yet implemented, a constitutional reform that would abolish term limits for Chinese presidents. Trump sensed what the Chinese leader's ambitions were. It was, quietly, the beginning of the brutal trade war that would later take shape between the existing superpower and a rising power led by a president in office for life.

What Trump may have not known is that Xi's ambition extended to a goal other than revising the national constitution. Xi would make good on that goal four months later. He is working on the other: unifying Taiwan with mainland China.

At the latest, sources say, Xi wants China and Taiwan to celebrate unification in 2049, the centenary of the founding of "new China," or the People's Republic of China.

Xi himself has said unification has been a long-cherished wish, part of the "Chinese dream" of the "great rejuvenation of the Chinese nation."

But it is an unrequited love. Many of Taiwan's 23.5 million people, who enjoy freedom and democracy, hope to maintain the status quo.

Encouraged by the pro-Beijing KMT's resounding victory in unified local elections in November, Xi warned the U.S. against interfering in Taiwan matters. He said China would not "renounce the use of force" against external intervention and forces pushing for Taiwan independence.

Tsai responded immediately, reiterating her rejection of Taiwan unifying with mainland China under a "one country, two systems" formula.

Her unequivocal stance helped right what was by all accounts a sinking ship.

Tsai had been forced to resign as chair of the DPP to take responsibility for the ruling party's resounding defeat in the local elections. There had also been a growing consensus within the DPP that Tsai's chances of being reelected as president in 2020 were fading so badly that the party should consider fielding a stronger candidate.

After her response to Xi's New Year's speech, Tsai's approval rating began to turn up.

More recently, as millions of Hong Kong citizens took to the streets to oppose an extradition bill that would have paved the way for criminal suspects to be handed over to mainland China, a public backlash against Xi's "one country, two systems" proposal swelled in Taiwan. 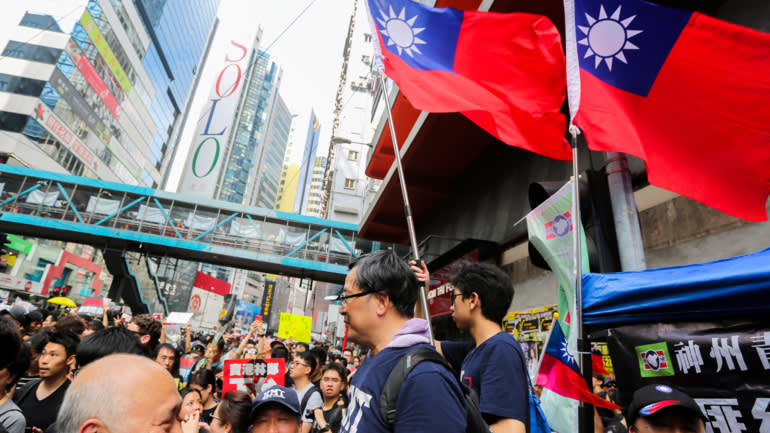 As Hong Kong protesters managed to convince the metropolis's leader to shelve the extradition bill they feared, they also filled Taiwanese, even the island's president, with newfound courage.   © Reuters

This month, the Trump administration approved the sale of large quantities of tanks and missiles to Taiwan.

Soon afterward, Tsai was in New York meeting with the U.N. ambassadors of 17 countries with which Taiwan has diplomatic ties -- an unusually high-profile step for the Taiwanese leader.

The tides are worrying for Xi because they interfere with a blueprint, or timeline, China has for reunification. Lin Quanzhong, a former researcher at Academia Sinica, a prestigious academic institution in Taiwan, described the stakes.

"China wants to have a pro-China administration in Taipei that accepts unification through 'one country, two systems,' by the 2040 presidential elections," Lin said. "Once such a president is in office, Beijing's road map foresees a process under which they will proceed with forming a 'unification pact' and 'basic law of Taiwan,' just like they did with Hong Kong."

What worked in Hong Kong -- such as making the territory more economically dependent on China, strengthening Beijing's influence on local media and creating pro-China opinions -- also appears to be taking root in Taiwan, Lin said. Still, Beijing has been unable to cobble together a majority of pro-China political forces.

In Hong Kong's case, it took 15 years from the time Deng Xiaoping and Margaret Thatcher began negotiating the then British colony's handover, which was realized in July 1997.

To secure Taiwan unification by 2049, following a similar 15-year timeline, Beijing will have to launch the process around 2035.

But as long as the DPP is in power, Beijing-Taipei unification negotiations will remain a distant wish. The DPP platform advocates Taiwan independence.

China has no time to lose. Each of the four presidential elections scheduled to be held in Taiwan between 2020 and 2032 will be extremely important.

"The moment of truth for cross-strait relations will be around 2030," another Taiwanese intellectual said. This period is also related to Xi's declaration that China will overtake the U.S., at least economically, by 2035.

If China manages to overtake the U.S. economically by then, it will also gain more gravitational pull in regard to Taiwan. In addition, China could have enough of a military presence in the South China Sea to threaten the use of force and warn the U.S. against "interfering" in Taiwan. The U.S. would have to regard such a warning as more than bluster. 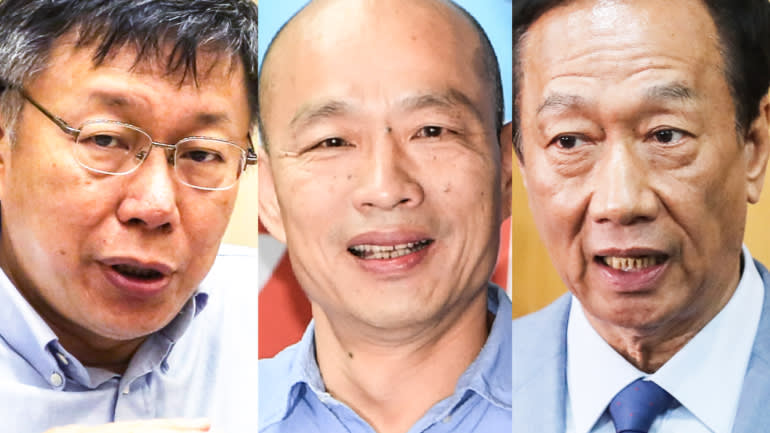 Ironically, the biggest risk to reaching the "one country, two systems" style of Taiwan unification that Xi envisions could be Hong Kong itself.

The skepticism toward "one country, two systems" that spread across Hong Kong puts Han, the Chinese Nationalist Party's presidential candidate, at a disadvantage.

When asked about the demonstrations in Hong Kong, Han initially replied, "I am not familiar with the situation." That made him a target of media criticism for being "pro-China."

Han later flip-flopped, vowing that a "one country, two systems" formula will never be realized in Taiwan if he is president.

Han was thrust into the political spotlight and won the Kaohsiung mayoral election in the unified local elections. He is a unique figure, quite different from the Chinese Nationalist Party's previous presidential candidates.

He calls himself "a vegetable seller" and that he will be "a commoner president" while garnering strong support among eligible voters discontent with economic inequality.

Yet, Han is said to present Tsai with an easier opponent than former Foxconn head Terry Gou. The vegetable seller's inexperience in the political arena is clear.

But the election is a half a year away. That is a lot of time. In the past six months, after all, Tsai amassed a comeback after the DPP's elections drubbing.

With popular Taipei Mayor Ko Wen-je, 59, eyeing a run, and with Gou also eliciting talk of an independent run, or perhaps even joining hands with Ko, all bets are off.