The cursed year: Xi and China brace for a wild 2019

Wars, riots and crackdowns have hit in jinxed '9' years

TOKYO -- In the highly superstitious world of China, where four is abhorred as an unlucky number but eight is coveted as auspicious, netizens are preoccupied with the significance of 2019.

They are bracing for a turbulent 12 months, pointing to history which shows that since the founding of the People's Republic of China in 1949, the country has always experienced a major incident when the year ends in a "9." Many have involved violent turmoil.

1979 -- War breaks out between China and Vietnam. (February)

1989 -- Martial law is imposed in the Tibetan capital Lhasa, in the wake of violent clashes. (March)

1989 -- Martial law is imposed in Beijing as student demonstrations spread. (May) The next month, the military suppress pro-democracy protests in Tiananmen Square and many people are killed.

1999 -- Followers of the Falun Gong spiritual movement surround the Zhongnanhai leadership compound in Beijing. (April) The following month, there are massive anti-U. S. demonstrations in Beijing to protest against the mistaken American bombing of the Chinese embassy in Belgrade.

As if that were not enough, netizens point out that most of these unfortunate incidents happened in the first half of the "9" year. 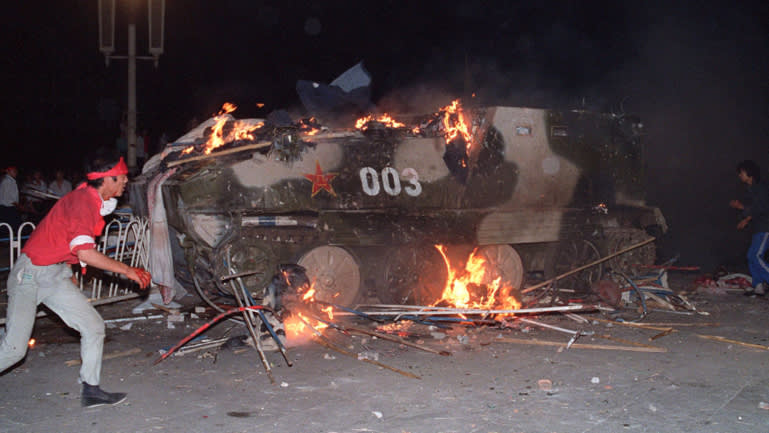 1989 was the year Chinese troops forcibly marched on Beijing's Tiananmen Square to end a weeks-long occupation by student protestors calling for democracy. Many people died. (AFP/Jiji)

When Chinese President Xi Jinping gathered together the central leadership as well as senior officials from across the country on Jan. 21 and gave an unusual speech which emphasized the risks confronting the nation, people wondered if it was connected to the jinxed "nine" year.

In his speech, Xi talked of two animals that symbolize the risks China must prepare for: black swans and gray rhinos.

In financial market jargon, a black swan refers to a serious unforeseen incident that defies conventional wisdom. The term "black swan" was coined at the end of the 17th century when black swans were discovered in Australia, shocking Westerners who had long believed they did not exist.

A gray rhino refers to a potential risk that is highly obvious but ignored. It is quite natural for a rhino to be gray. As long as a rhino is gentle, there is no reason for concern. But once the big animal goes on a rampage, nobody can bring it back under control.

Xi pounded home the message that party cadres must "struggle" to avoid risks that threaten social stability, signaling that these are risks to Communist Party rule, but he did not elaborate on what those risks actually were.

Those who heard the speech are thinking of two possibilities.

The first is the Sino-U. S. economic, trade and tech war. The U.S. Department of Justice announced Monday more than 20 charges against Huawei, ranging from illegal transactions with Iran to stealing a robotic arm from T-Mobile. The indictment came on the eve of U.S.-China trade talks, clouding the outlook for the negotiations. 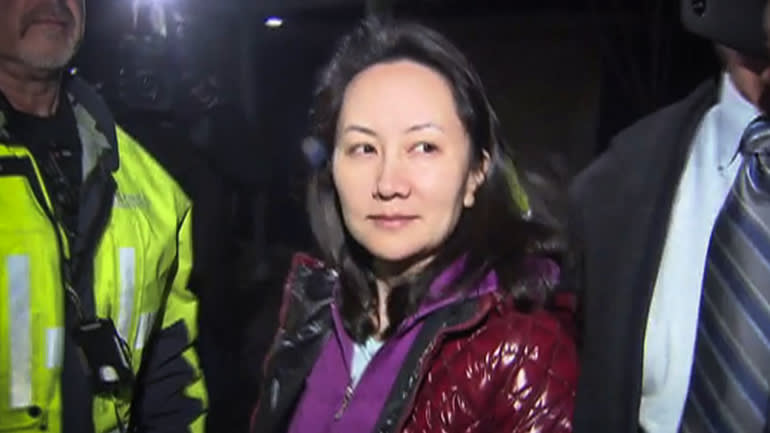 The second risk is the rapid slowdown of the Chinese economy, triggered by excessive debt and struggling private companies, which has a direct impact on the lives of ordinary Chinese people.

China's reformist economists have also begun to speak about the same risks, warning the public of the dangers. But while their talking points look similar to Xi's, a closer look at the reformist economists' messages show that they include highly sensitive topics.

For example, there is skepticism over the true level of China's economic growth. It was officially announced on Jan. 21 -- the same day as Xi's speech -- that the Chinese economy grew 6.6% in real terms in 2018.

But Xiang Songzuo, a professor at Renmin University of China, said in a lecture last December that internal research estimated growth in 2018 could be as low as 1.67%.

If that is true, all assumptions break down. In fact, many new estimates indicating low economic growth have emerged since the turn of the year.

Xiang is a regular attendee at international financial conferences. His outspokenness has sparked controversy, but he has not backed down and remains confident of his numbers. Professor Xiang Songzuo talks to Nikkei in a 2016 interview. (Photo by Issaku Harada)

At an economic forum in Shanghai on Jan. 20, Xiang criticized some academic and media figures by name for scaring and demoralizing private firms by abruptly advocating the abolition of private ownership in 2018 or completely misjudging the severe impact of the Sino-U. S. trade war.

Xiang again hinted at discrepancies between the government's official view on growth and the true state of the economy.

Interestingly, videos of lectures that raise questions about the government's approach have been uploaded to the internet in China with no problem and are allowed to remain for a while. They are only deleted after going viral, in other words once they have made a big splash.

Brave remarks about the economic reality of China, such as the ones made by Xiang, appear to enjoy a certain level of support among Communist Party reformists and elders, who insist that people should not bury their heads in the sand.

Responding to the economic slowdown, the Chinese government has come up with a traditional economic stimulus package, which includes additional infrastructure investment.

There is a possibility that if the massive stimulus pays off and consumption recovers, the Chinese economy will pick up in the second half of 2019, when a ceremony will be held to mark the 70th anniversary of the foundation of the People's Republic of China.

But Trump's stance on China is unpredictable at best. And there is another big risk to the Chinese economy: the property market.

In his Jan. 20 lecture, one day before President Xi's speech, Xiang talked of a gray rhino. Unlike Xi, Xiang was specific. According to Xiang, one gray rhino expected in 2019 is the risk of the booming Chinese property market collapsing. Buildings are seen among fog in Qingdao, Shandong province. Most of China's personal wealth is held in real estate, which some call unstable.    © Reuters

Xiang estimates that 80% of the wealth currently owned by the Chinese is in real estate. The total value of this property is equal to the combined annual gross domestic product of all the world's developed nations, including the U.S., Europe and Japan.

Although everyone is aware of this extraordinary money game, no effective countermeasures have been taken. One day, people will realize that their huge wealth is no more than a mirage and their property assets will tumble in value, Xiang has warned.

This would be similar to the way that Japan's bubble economy burst in the 1990s. Although the Chinese government has thoroughly studied and claims to have learned lessons from Japan's failures, which triggered a prolonged recession, alarm bells are continuing to ring in China.

When speaking in front of central and rural party leaders on Jan. 21, Xi might have been expected to convene a long-postponed key economic policy meeting, namely the fourth plenary session of the 19th Central Committee of the Communist Party, since most of the members overlap. But with uncertainty looming over the U.S.-China trade war, Xi was unable to set a date for the meeting and decide on economic growth plans for the coming years.

The indictment of Huawei may be a fitting start to the jinxed "nine" year, portending still more dramatic events to come. Xi's repeated calls for his leadership group to unite in a struggle against major risks reflect his own fears of a "black swan" in 2019.