Concessions to Trump will be closely scrutinized within China

TOKYO -- Is China making too many concessions to the U.S. in their critical trade talks?

Unhappy Chinese nationalists certainly think so and they are concentrating their fire on Vice Premier Liu He, who led Beijing's delegation to the latest round of negotiations in Washington last week.

Chinese internet users are making unflattering comparisons between Liu and another big figure in Chinese diplomacy, Li Hongzhang, a powerful Qing dynasty figure who signed an 1895 peace treaty with Japan which ended the First Sino-Japanese War.

They are discussing two photos posted side by side. One shows Liu sitting across the Resolute Desk from U.S. President Donald Trump in the White House Oval Office, while the other depicts Li looking confident and relaxed.

By comparing the two politicians, Chinese netizens are indirectly criticizing Liu for making too many concessions to the U.S., compared with Li, who was defeated in battle against another big enemy (Japan) but strove to protect the China's national interests until the end.

Furthermore, there is smoldering discontent in China that Liu is being treated disrespectfully by the U.S. To be sure, in the Oval Office photo, Liu comes across as servile, sandwiched between American and Chinese officials, as Trump, in his wide, leather arm chair, stares down at the Chinese official across his desk.

This has ruffled patriotic leftists' feathers in China and underlined the contrast with the powerful Li.

In the spring of 1895, Li visited Japan to conclude a peace treaty. On the second floor of a blowfish restaurant-cum-hotel named Shunpanro, Li held tough negotiations with the Japanese delegation, headed by Prime Minister Hirobumi Ito. Li and Ito were seated equally, on two sides of a long table in the large hallroom. The 16 chairs used at the meeting were embroidered with exquisite gold lacquer.

One prominent leftist intellectual at Peking University has described Li as a great politician with a literary temperament who was paid due respect even by Japan, the Qing dynasty's sworn enemy. This stands in stark contrast to the Communist Party's official version of history, where Li is labeled as a "traitor" because of his association with a feudal dynasty.

But in recent years, Li has been reevaluated in Chinese TV dramas as "a tragic politician" who strove for the rebuilding and survival of an empire under Empress Dowager Cixi, who drove the Qing dynasty into extinction.

During his stay in Shimonoseki, Li was shot in the left cheek by a Japanese activist with a pistol. But fortunately, the injury was not life-threatening and he continued peace treaty negotiations with Japan while wearing a bandage. 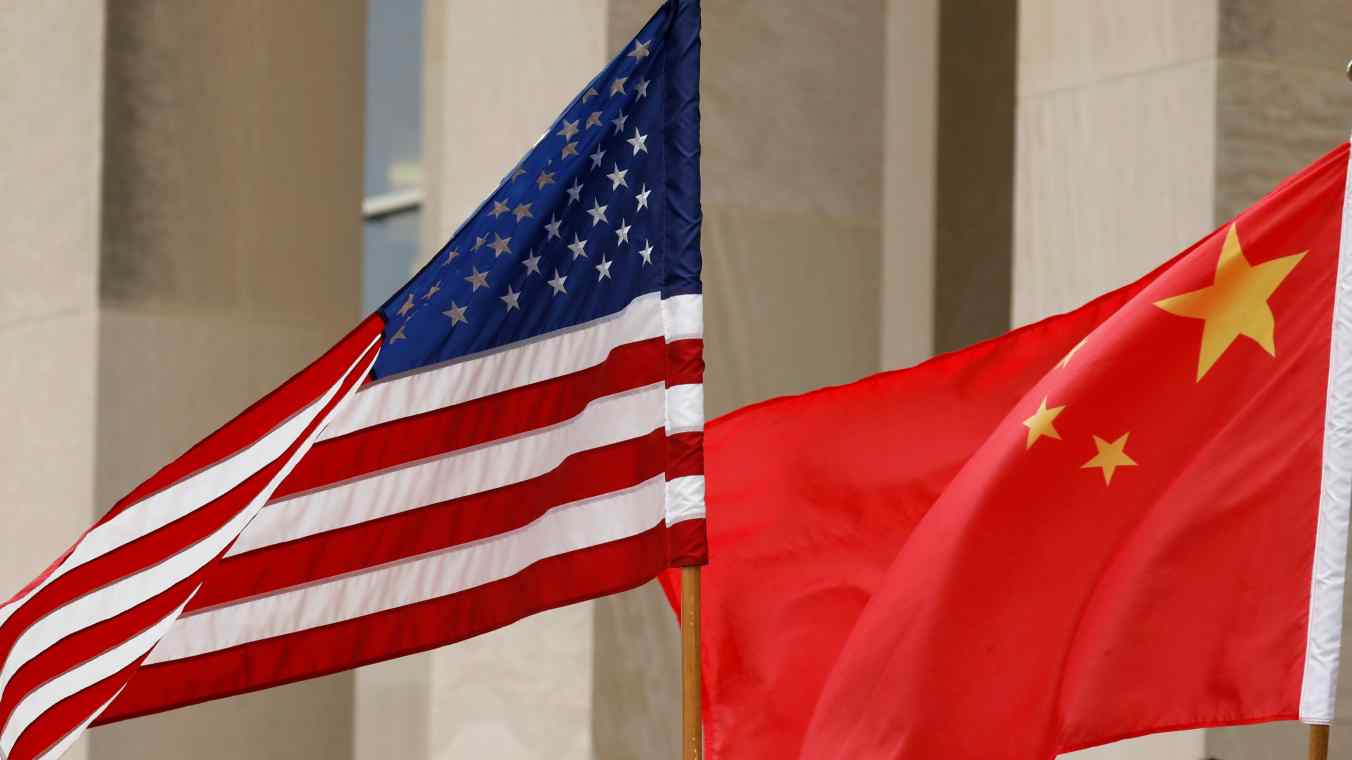 US pushes China for monthly meetings to enforce trade deal

Li was more than 1.8 meters tall. The big man's serious attitude during the negotiations helped ease criticism of him when he returned home to China after signing the peace treaty.

Be that as it may, calling Liu He "no match" for Li Hongzhang may be a little harsh. When seated across the table from U.S. Trade Representative Robert Lighthizer during the cabinet-level negotiations in Washington and Beijing, Liu was negotiating from an equal position.

But the real reason Liu has borne the brunt of criticism from the leftists known as "left Maoists" is because he is Chinese President Xi Jinping's close aide and economic adviser.

"The He (crane) should emulate the Hong (goose)," critics have charged, playing with the Chinese characters that form the two politician's respective names.

For Chinese critics, attacking Xi directly is out of the question. The leader has significantly consolidated his power, including the abolition of presidential term limits. That is why they direct their discontent toward Liu He, the most convenient scapegoat.

While the leftists have felt an affinity for many of Xi's policies, because of their closeness to a Mao Zedong-style policy of "zi li geng sheng (self-reliance)," they are likely to step up criticism if Xi changes course and makes compromises with Washington. As Trump and Chinese President Xi Jinping square off over trade, leftists in China fear their country is giving away too much. (Nikkei montage/Reuters)

An annual session of the National People's Congress, China's rubber stamp parliament, will begin in Beijing on March 5. It is an important meeting that sets the year's official economic growth target.

But in reality, the biggest factor in the fate of the economy will be the shape of a final trade deal with the U.S., against a backdrop of the slowest growth in China in 28 years.

U.S.-China trade talks are expected to continue during the Beijing parliament's session, building toward a summit between Xi and Trump in Florida where a trade deal is set to be finalized.

For China, which always dislikes interference in its internal affairs, having its domestic politics hijacked by negotiations with the U.S. is not a pleasant situation.

Yet with the Chinese economy in the difficult situation it is in today, Xi needs personally to bring the Sino-U. S. negotiations to a successful conclusion in Florida, even if it means being absent from Beijing on this occasion.

Citing progress in trade talks, Trump said this week that he would delay imposing additional tariffs on Chinese products.

"Assuming both sides make additional progress, we will be planning a Summit for President Xi and myself, at Mar-a-Lago, to conclude an agreement. A very good weekend for U.S. & China!," he said on Twitter.

With no choice but to make significant concessions to the U.S., Xi's hope was to at least hold the summit on Chinese soil so as to show his constituents that the American president had traveled to see him.

But he was not in a strong position to insist. A woman browses for overseas brands at a shop in Beijing. (Photo by Akira Kodaka)

A visit to some shops selling overseas brand clothes popular with ordinary Chinese on a busy street in Shanghai, the country's commercial hub, helps explain why Xi had little choice but to accept Trump's choice of location.

Tags attached to the latest goods sold there show that they were made in Vietnam, Indonesia, Bangladesh, Cambodia, Pakistan or somewhere else outside China.

Until just one or two years ago, most of the products sold in those shops were Chinese-made. But now more than half of them are made in Southeast Asia and South Asia.

It is not just due to the U.S.-China trade war and the punitive import tariffs. Labor and other various costs in China have risen sharply in the past several years, prompting many companies to move their production abroad at an accelerated pace.

Foreign companies with global operations, which have so far supported China's exports, are sensitive to costs and extremely quick to move. Their shift of production outside China has dealt a heavy blow to small suppliers in the country.

Private small and medium-size companies in textiles, manufacturing and machinery assembly have been at the core of China's labor-intensive industries. Many of them are in the provinces of Zhejiang and Fujian, where Xi served for many years earlier in his career.

The U.S.-China trade war has dealt these regions a further blow. Some areas have seen orders drop between 20% to 50% since the end of last year.

Xi has been informed of this situation. That is why he badly needs something to change the mood through a cease-fire in the U.S.-China trade war.

Just as there are today, there were objections in China to making concessions to the U.S. when the two countries held negotiations on China's accession to the World Trade Organization, which were concluded in 2001.

But as things turned out, WTO membership served as the driving force behind China's rapid development into the world's second-largest economy, overtaking Japan. Chinese President Xi Jinping delivers his speech at the closing session of the National People's Congress in 2018. (Photo by Kosaku Mimura)

China has experienced two "opening ups." The first came in 1978, when Deng Xiaoping's policy of "reform and opening-up" was introduced. The second opening up came in 2001, when Beijing joined the WTO.

The question now is whether Xi can make bold enough decisions, in defiance of domestic objections, to enable a new trade deal to spur a genuine "third opening up of the country."

What makes it difficult is that some of the American demands could force a reversal of China's policies set out for Xi's "new era."

Xi himself has spearheaded calls for "stronger, larger and better" state-owned companies. Reform of the state-led corporate subsidy system, which is demanded by the U.S., would run counter to this dogma.

Many skeptics in China think that even if a final trade deal is reached at the next U.S.-China summit, Trump will launch a fresh attack on China and make new demands within one year as he eyes reelection.

Hu Xijin, the influential editor-in-chief of the Global Times, a newspaper affiliated with the Communist Party, wrote on his blog that although it is normal for there to be a debate at home over a big issue, a vast majority of Chinese would welcome the end of the trade war. People should respond rationally, he said.

Like the critics who attacked Liu He by comparing him to Li Hongzhang, the editor-in-chief's post is a punch from the other side, protecting Xi, underlining the extent of the feud going on within China behind closed doors over the issue.