The lesson Xi learned from Tiananmen 30 years ago

He was the top official of Ningde, a city in Fujian Province.

That May, Tiananmen Square in central Beijing filled up with students advocating for democracy and the eradication of corruption. The demonstrators were pushing the Chinese Communist Party leaders to acknowledge their "patriotic action."

Little did they imagine that the People's Liberation Army, who they thought were on their side, would open fire on them. The bloody military suppression on June 4 sparked an international outcry.

What did Xi, the young provincial politician, think of the events in Tiananmen? Since he does not talk about the matter publicly, there is no way to know.

But judging from his six and a half years at China's helm, and from what we can see through the slits in the Bamboo Curtain, one can guess the political lessons he learned.

Chinese leaders have no choice but to concentrate power and establish authoritarian positions, Nathan said. If they do not, they allow party elders and political foes to collude and end up being caught in the middle. Given this alternative, they instead eliminate all rivals and surround themselves with followers, Nathan said.

"This is the lesson Xi learned," from the fierce political battle related to the Tiananmen incident, he said.

A figure who ended up caught in the middle was Zhao Ziyang, the party general secretary in 1989 who was sympathetic to the student protesters.

Attacked by party elders -- led by then paramount leader Deng Xiaoping -- and by foes such as conservative Premier Li Peng, Zhao instantly lost power and was placed under arrest. He died in 2005.

According to material disclosed by Nathan, Yang Shangkun, then China's president and very close to Deng, said shortly after the Tiananmen incident: "Since comrade Zhao Ziyang became general secretary, the Politburo Standing Committee was not able to create a 'core' figure."

Yang made the remark during an enlarged Politburo meeting on June 19-21, 1989. The term "core" means a special leader who stands above everybody else. Yang was implying that if there had been a "core" figure, it would have been possible to bring the situation under control. 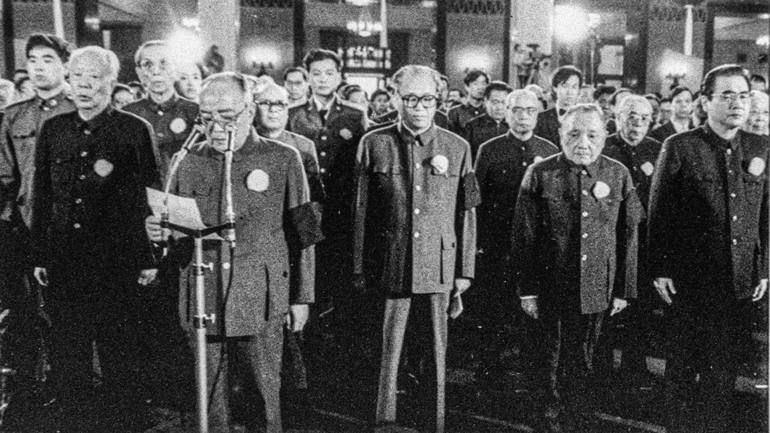 Yang Shangkun, speaking, Zhao Ziyang, Deng Xiaoping and Li Peng attend a memorial service for Hu Yaobang at the Great Hall of the People on April 22, 1989. It was the death of the reform-minded Hu that brought tens of thousands of students to Tiananmen Square.   © Kyodo

What Nathan pointed out about contemporary Chinese politics hits the nail on the head. Consolidating power is at the heart of what Xi has been doing since coming to power in 2012.

Xi then set his sights on another rival political force, one that boasts as many as 90 million members: the Communist Youth League. Former officials of that massive organization form a faction led by former President Hu Jintao, 76.

Since Ling Jihua, 62, a key member of the Communist Youth League faction, was purged, the faction's influence has significantly eroded.

As he consolidated power, Xi successfully blocked party elders, such as former leaders Jiang and Hu, from joining forces with rivals who could pose a threat to him.

When Xi formed the new Politburo at the party's last quinquennial national congress in the autumn of 2017, his close aides accounted for the majority of new members.

Xi has probably sworn to himself never to become another Zhao Ziyang and never to allow an incident like Tiananmen that threatens to split the party's central leadership.

His resolve has helped him gain the upper hand in the intraparty power struggle and allowed him to acquire "core" status, something Zhao failed to do.

The lessons of Tiananmen are also reverberating in the U.S.-China trade war.

According to Nathan, Xu Xiangqian, a military elder and marshal, warned those at the Politburo meeting held shortly after the Tiananmen incident of outside efforts to topple the socialist People's Republic of China.

"Reactionary forces at home and abroad," he said, "are joining hands and attempting to create a bourgeois state, subordinate to Western powers," documents show him as saying.

The argument is similar to one being made by today's hard-line party conservatives in regard to the U.S.-China trade war -- that the U.S. is attempting to impose an "egregious unequal treaty" on China to topple the country's socialist system.

Ever since Tiananmen, China's communist regime has been hesitant to discuss even gradual democratization, even though that is the standard path of development. After seeing firsthand the anger of the students and the public in 1989, the leadership concluded that any easing of control could lead to an explosion of dissatisfaction that would be difficult to contain.

That is why political reform has stalled in China.

The party has masked this contradiction partly by implanting broad-stroke ideals like the "Chinese dream" and the "great rejuvenation of the Chinese nation."

Those slogans envision a promised land with China as the "world's No. 1," overtaking the U.S. both economically and militarily. Big dreams and lofty slogans make the various troubles of today look small.

But China's bluster provoked President Donald Trump's administration. It has triggered a full-scale battle for hegemony between the two countries, much earlier than Beijing expected.

China was not ready for a "new Cold War," and Chinese companies such as Huawei Technologies have suffered.

The "Chinese dream of rejuvenation" that Xi talks about can be achieved only if the economy grows in a stable, long-term way, with more citizens joining in the prosperity.

Massive profit produced by companies in China, including foreign-owned enterprises, has driven the country's economic growth. But the full-fledged trade war has put that formula for success in question. 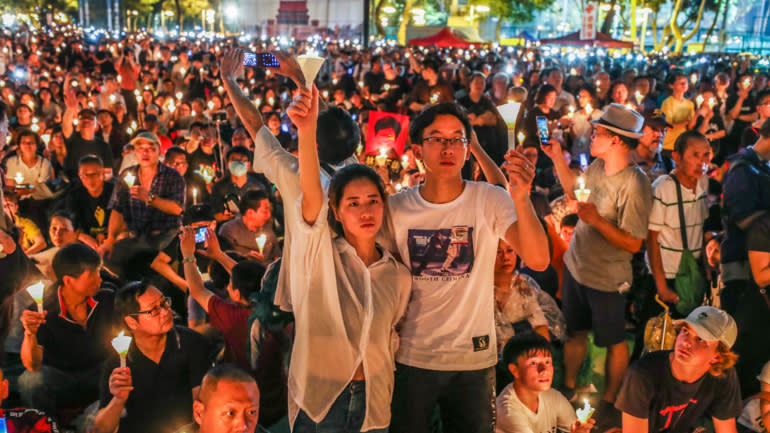 Thousands of Hong Kongers at Victoria Park on June 4, 2019, show their solidarity with China's courageous pro-democracy protesters of 30 years ago. (Photo by Kosaku Mimura)

How will the escalating trade war affect party rule and the future of democratization in China? Here, the China experts who attended the Meiji University symposium on Saturday are split.

"Needless to say, U.S. President Donald Trump is not thinking about political reform as he steps up pressure on China," former student leader Wang Dang said recently in Tokyo. "But the U.S. pressure is certainly making it more expensive for the Communist Party to govern China."

In 1989, the now 50-year-old Wang was a Peking University student, one who was also spearheading the pro-democracy movement.

The economy is the key, Wang said. In China, unemployment has already become an issue. If China slips into negative growth, change toward democratization "will inevitably happen," he said.

Zhang Boshu, an adjunct professor at Columbia University, disagrees. The 63-year-old scholar said that "even if the Chinese economy is in dire straits, no big change will suddenly happen because surveillance of the public, with help from digital technologies, is fairly strict."

Zhang's position is that people should wait patiently for future middle class growth and a subsequent change in awareness.

Hu Ping, the 71-year-old editor of Beijing Spring, a Chinese pro-democracy movement journal, said: "If there is any mistake in dealing with the U.S., confrontation will occur at the top echelon of the Communist Party, adding fuel to the power struggle. In that case, the anti-Xi factions will have an advantage."