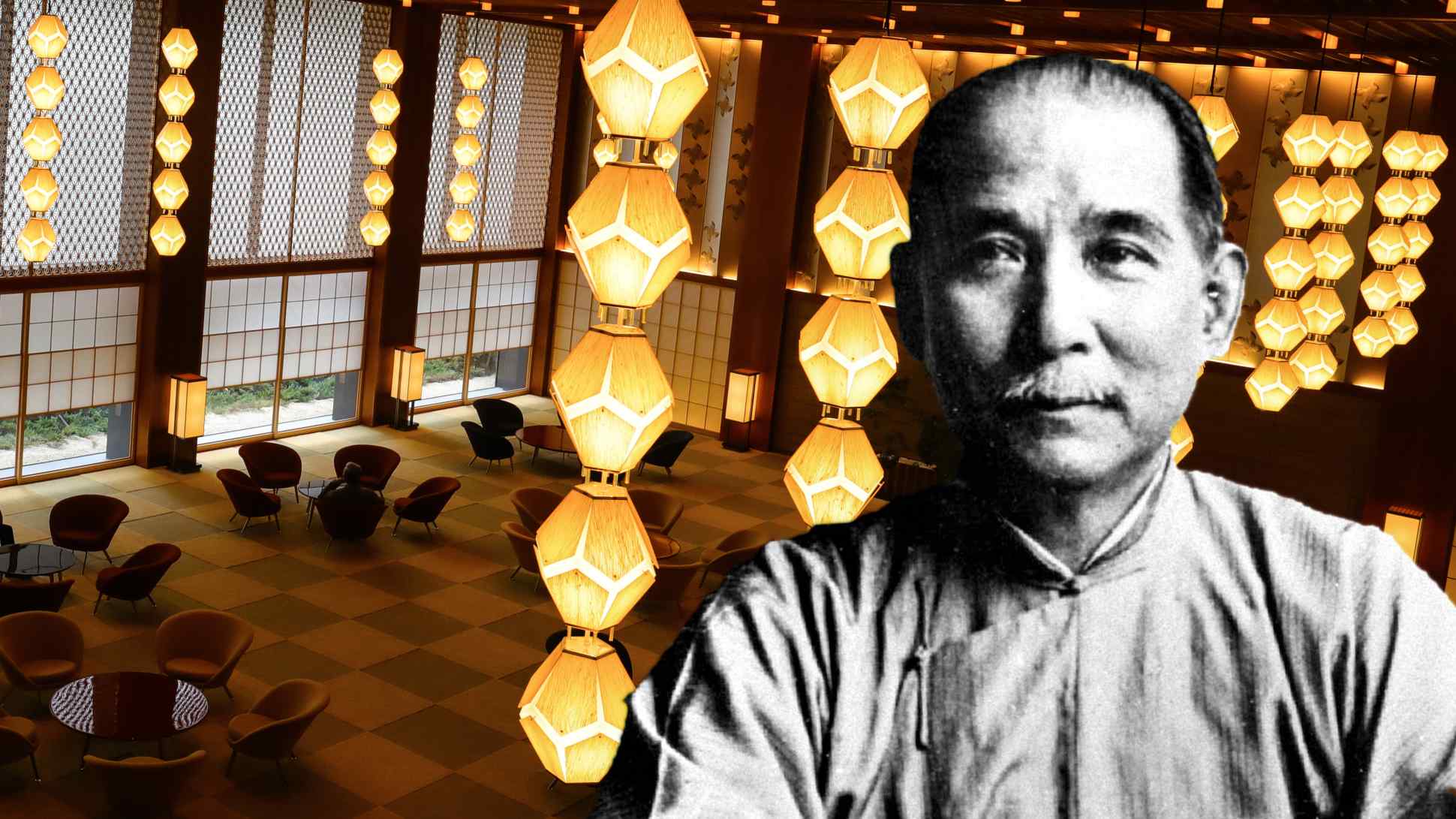 The new Okura Tokyo has recognized the hallowed grounds on which it stands with a monument to the Chinese United League, whose guiding members chose Sun Yat-sen as their leader. (Nikkei Montage by AP/Ken Kobayashi)
China up close

With help of Japanese supporters, Sun Yat-sen dreamed of a united Asia

TOKYO -- When the iconic hotel Okura Tokyo reopened earlier this month after spending four years under construction cranes, a stone monument was quietly unveiled on the premises.

"The origins of the Chinese United League," the inscription reads.

It was here, in the heart of Japan's capital, that the foundations of the 1911 revolution, which overthrew China's last imperial dynasty, were laid.

The Xinhai Revolution triggered a chain of historic events and battles that led to modern-day China.

But it all began with the formation in Tokyo of the Tongmenghui, a political association known in English as the Chinese United League.

It was Aug. 20, 1905, three months after the Imperial Japanese Navy under Admiral Heihachiro Togo defeated Russia's Baltic Fleet, in the critical battle of the Russo-Japanese War. Japan was exhilarated. 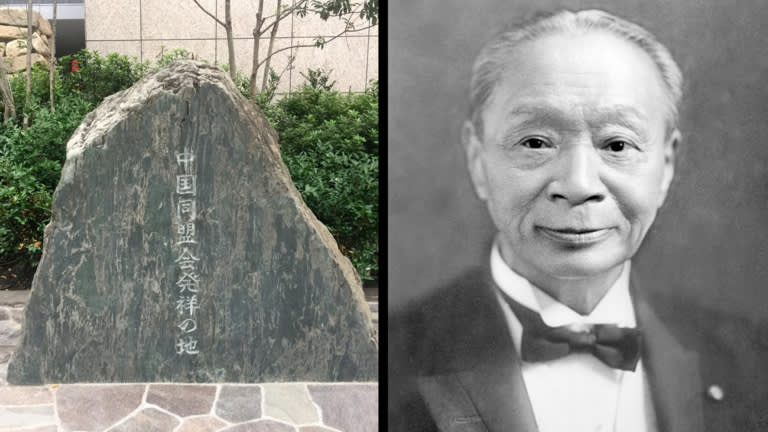 The inscription reads, "The origins of the Chinese United League." The portrait is of Kihachiro Okura. (Source photos by Katsuji Nakazawa and Kyodo)

Toppling the Qing Dynasty, ending imperial rule and establishing a republic was a dream shared by various Chinese revolutionist groups. For those escaping the Qing Dynasty's crackdown, Tokyo was a perfect location to come together and form a united front.

On that rainy summer day 114 years ago, groups such as the Xingzhonghui (Revive China Society), which had been established in Hawaii by Sun Yat-sen, the father of the Chinese revolution, and the Huaxinghui (China Revival Society), led by Huang Xing, assembled in Tokyo.

On the grounds of what today is the Okura Tokyo, a three-hour event was held to form the United League. Members elected Sun to head the group and adopted a platform that would later be called "The Three Principles of the People." Those pillars were nationalism, democracy and socialism.

Various Japanese helped the United League on its way. Kihachiro Okura, the founder of the Okura Zaibatsu was one of them.

The exact spot of the United League's birth was long a mystery.

In his diary, Song Jiaoren, who along with Sun founded the Kuomintang, or Chinese Nationalist Party, wrote that the venue was the Sakamoto House, located in Reinanzaka, Akasaka.

The name "Reinanzaka" is familiar to many Japanese above a certain age. It was at Reinanzaka Church in 1980 where superstar singer Momoe Yamaguchi married actor Tomokazu Miura. It was called the wedding of the generation.

But Song's description was inaccurate. It emerged later from the diaries of another Japanese United League supporter, Toten Miyazaki, that "Sakamoto House" was actually located in "3 Aoi-cho, Akasaka-ku," adjacent to Reinanzaka. 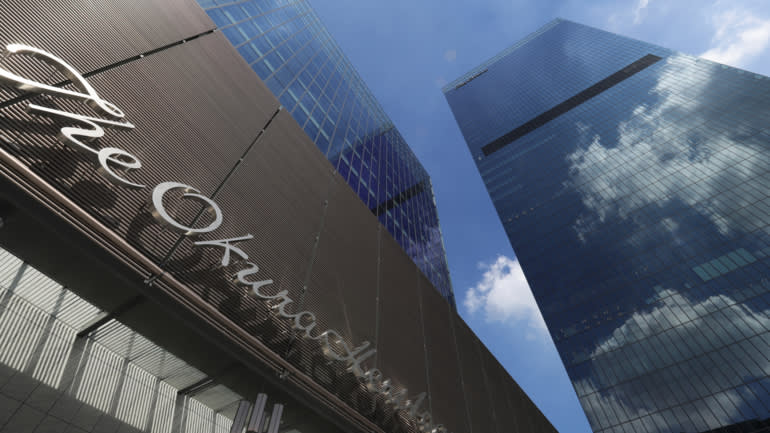 The new Okura Tokyo is made up of two main buildings, including the Prestige Tower. (Photo by Ken Kobayashi)

The Western-style building that hosted the Tongmenghui's inaugural meeting was located in the compound of Kihachiro Okura's sprawling mansion.

Okura was close to Sun. The Japanese businessman helped export large quantities of guns and ammunition to the Philippines, a place where Sun was helping the independence movement. Sun harbored dreams of building an alliance of modernized Asian states.

Assisting with those dreams was Shokichi Umeya, a trailblazer in the Japanese movie business who supported Sun financially.

Ultimately, the ship carrying the arms sank off the coast of Shanghai, the dreams along with them.

Okura Tokyo, consisting of three wings, opened for business in 1962 on the grounds of Okura's mansion, the cradle of the 1911 Chinese revolution.

This month, the hotel, once considered among Tokyo's modernist gems, was reborn as an ultraluxury high-rise inn consisting of two towers, one 41 stories and the other 17. The old main building's popular lobby has been reproduced.

Bunji Kubota, a professor emeritus at Japan Women's University, had long lobbied Hotel Okura to erect a monument to commemorate the founding of the United League. It was Kubota who discovered the movement's cradle.

The relationship between the 1911 Chinese revolution and Japan runs deep. Sun tied the knot with "Madame Sun Yat-sen," his wife Song Qingling, in Tokyo. Song later became a vice president of the People's Republic of China. In 1904, a year before the United League's birth, Lu Xun, a leading figure in modern Chinese literature, traveled to Sendai, Miyagi Prefecture, to study at the Sendai Medical Academy, which today is the medical school of Tohoku University.

After Lu left medicine for literature, Mao Zedong became a fan of his novels, which now appear in Chinese textbooks.

Today, quite a few Chinese students speaking the Beijing dialect can be seen walking around a monument to Lu Xun on Tohoku University's Katahira Campus in the central part of Sendai.

Zhou Enlai, a former Chinese premier who contributed to the 1949 communist revolution, had earlier journeyed to Japan intent on studying in Tokyo's Kanda district.

While a regular at Kanyoro, a Chinese restaurant that still exists near Tokyo's used-book-store district and is said to have also been frequented by Sun, the 19-year-old Zhou came into contact with communist ideology, which was beginning to spread in Japan.

Later, when Zhou was premier, one Xi Zhongxu worked under him for nearly 10 years. Xi was the father of Chinese President Xi Jinping. The elder Xi assumed important posts such as secretary-general of the State Council, the Chinese government, and also vice premier under Zhou.

At each stage, China was deeply intertwined with Japan, for better or worse. The Kuomintang, which was founded by Sun, fled to Taiwan. 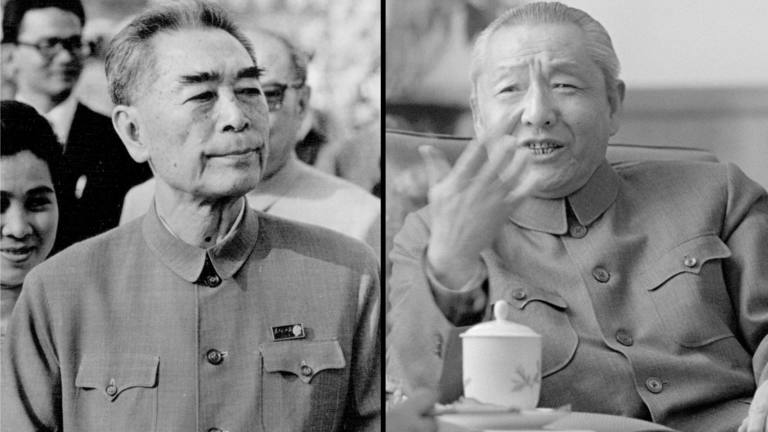 When he was China's premier, Zhou Enlai had Xi Zhongxu working under him. Xi is the father of current President Xi Jinping.   © Kyodo

Many years have passed. In Taiwan, which has introduced direct presidential elections, the pro-independence Democratic Progressive Party, or DPP, is in power and the Kuomintang stands as the opposition.

While China and Taiwan have deep economic relations, they remain locked in a political feud.

The cross-strait relations are complicated, with communist Beijing now ironically longing for the Kuomintang, its civil war enemy all those decades ago, to return to power.

China is also aiming to establish diplomatic ties with Kiribati, another Pacific island nation, which has also cut off official relations with Taiwan. The poaching of two of Taiwan's few remaining diplomatic friends is China's way of ratcheting up pressure on the DPP administration of President Tsai Ing-wen.

As in the past, this year will likely see the portrait of Sun, the father of the 1911 Chinese revolution, hung along with that of Mao, the father of the People's Republic of China, at Beijing's Tiananmen Square on Oct. 1, China's National Day.

This year will also see many Chinese tourists visit Tokyo during a long string of National Day holidays. And in spring, President Xi is due to visit Japan as a state guest. A few months later, hundreds of thousands of tourists from around the world will flock to the second Summer Olympics to be held in Tokyo.

It is hoped that many tourists from China and Taiwan will use these opportunities to visit the monument that now stands in front of Okura Tokyo.

A moment of silence at the monument, reflecting on China's history -- from the Xinhai Revolution to the foundation of the People's Republic of China to relations with Japan -- may bring a fresh perspective that opens the way to Asia's future.