TOKYO -- After intense diplomatic efforts involving Chinese President Xi Jinping, the venue of the historic meeting between U.S. President Donald Trump and North Korean leader Kim Jong Un has been decided. The two leaders will meet in Singapore on June 12.

The choice of location took into account a number of factors: North Korea has an embassy there, the surrounding waters make it easy to protect, and the city-state is close enough for Kim to reach via a direct flight.

But there is another factor that likely resonated with both Trump and Kim -- the presence of a casino, namely the Marina Bay Sands. This is not because either plans on sitting down at a blackjack table, but because holding the meeting at the resort, or even near it, has benefits for both leaders.

Adelson is a unique corporate figure, as his business decisions have a direct impact on Trump, Xi and Kim, as well as on Japanese Prime Minister Shinzo Abe. Both Xi and Abe are keen to expand casino gambling in their home countries to boost their economies.

Adelson and Trump go back many years. When Trump tried his hand at running a casino in New Jersey's Atlantic City earlier in his career, Adelson was a rival. Trump's casino and hotel complex that opened in 1984 had trouble making money and went out of business in 2014. But the experience helped Trump build a network of contacts in the casino industry, including with Adelson.

Adelson is the world's 21st wealthiest person with a net worth of $38.5 billion, according to Forbes' 2018 rich list. He and his wife, Miriam, lavished $82.5 million on the U.S.'s 2016 election cycle, according to opensecrets.org. Much of the Adelsons' money went to political action committees, or PACs, that backed Trump as well as other conservative candidates and causes. 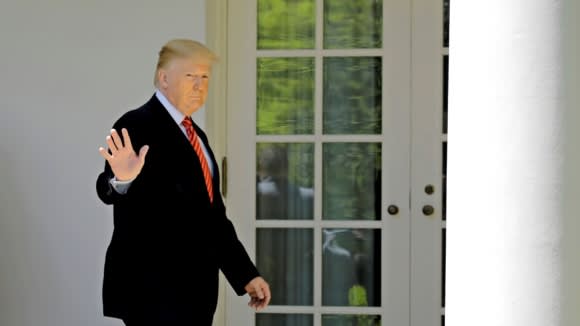 There is a reason why U.S. President Donald Trump put Singapore in the running to host his summit with North Korea's Kim Jong Un.   © Reuters

It was on the morning of May 10 that Trump tweeted: "The highly anticipated meeting between Kim Jong Un and myself will take place in Singapore on June 12th." The decision came after weeks of speculation, with the president saying, "We're down to two countries," in late April, only to add a few days later that he was also interested in holding the meeting in the demilitarized zone separating the two Koreas.

But it may have been a move by Adelson that finally tipped the scale. According to Politico, a week before the May 10 tweet, Adelson agreed to give $30 million to a Republican-aligned PAC, the Congressional Leadership Fund, to stop a Democratic takeover of the House of Representatives in the November midterm elections.

Since then, Trump has followed up with various Adelson-friendly policies, such as pulling out of the Iran deal. Today, the U.S. moves its embassy operations in Israel to Jerusalem from Tel Aviv, where it has been since 1966.

Supporting Trump has been a fruitful investment for the casino magnate. In the first quarter of this year, Las Vegas Sands received a one-time windfall gain of $670 million from the Trump tax cuts. "It has been a record-breaking quarter," Adelson said in an earnings conference call on April 25, where he announced that Ebitda, or earnings before interest, taxes, depreciation and amortization, had tripled from the same quarter a year ago to $1.5 billion.

"The G in my middle name stands for Gary but it also stands for growth and that is fully on display at present in each of our markets," Adelson said.

The 84-year-old chairman doubled his personal salary to $26 million in 2017 from $12 million a year earlier. Hosting the Trump-Kim summit would enable Marina Bay Sands to draw crowds for years to come. As for North Korea's Kim, Adelson would be a good contact as the country prepares to bring itself back into the international community.

Casino gambling has played a role in bringing badly needed foreign currency to North Korea. Stanley Ho, a Macau casino mogul, was once involved in the opening of a casino in North Korea.

But Pyongyang's ties with Ho have been damaged since the February 2017 assassination of Kim Jong Nam, the leader's older half-brother, who was the key conduit for promoting the casino business.

Jong Nam's role as the casino representative allowed him to be based in Macau and stay at luxury hotels.

If talks with Trump go well, North Korea may try to embark on a new casino resort development project. The country has a dire need for foreign currency. Sinuiju, a city that sits on the border with China, is said to be a candidate site.

North Korea has harbored big plans for Sinuiju in the past. In September 2002, then leader Kim Jong Il announced the establishment of a Sinuiju special economic zone. But China quickly crushed the initiative.

Even if the summit itself is not held at the Marina Bay Sands, Adelson's hotel could provide accommodation for Trump's delegation or host related events. The ultimate win for Adelson would be a joint visit by Trump and Kim to the 15,000 square meter-casino, with 600 table games and 1,500 slot machines. Adelson has been a staunch backer of the state of Israel, which has hailed Trump's decision to pull out of the Iran deal.

When Adelson visited Trump at the White House in October 2017, he is said to have expressed disappointment toward Trump's failure to move the U.S. embassy to Jerusalem on his first day in office, as Trump had promised on the campaign. 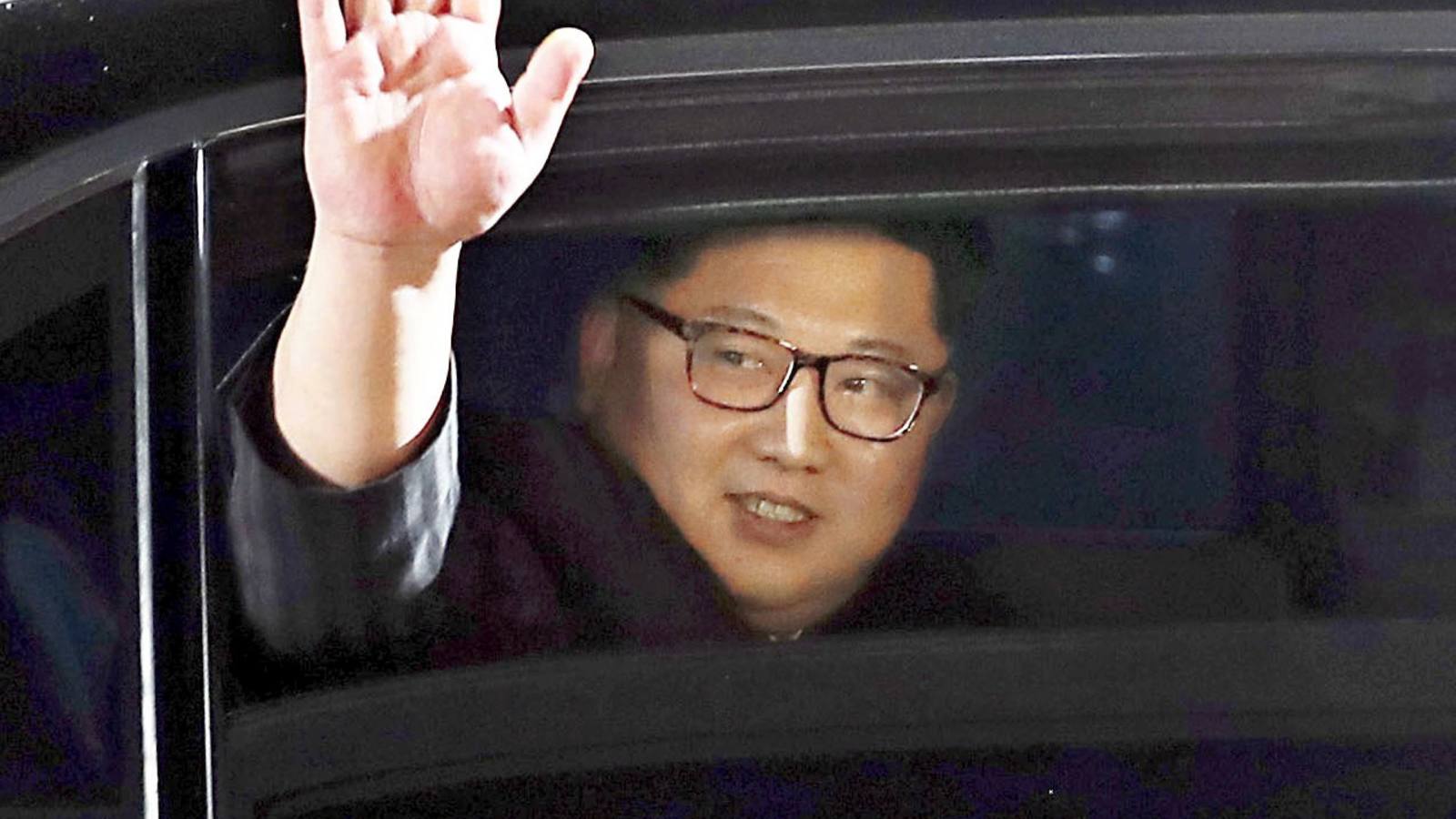 Kim Jong Un shows the world the 'Art of the Deal'

Two months later, Trump formerly announced the recognition of Jerusalem as the capital of Israel and ordered the move of the embassy. Adelson has offered to help finance the relocation costs.

Singapore is no stranger to landmark summits. It hosted the first summit between China and Taiwan, in November 2015. That meeting became known for a long handshake between China's Xi and then Taiwanese President Ma Ying-jeou of the Nationalist Party.

That did not turn out well for Ma, whose embrace of China likely helped Tsai Ing-wen of the pro-independence Democratic Progressive Party win the island republic's presidential election two months later. 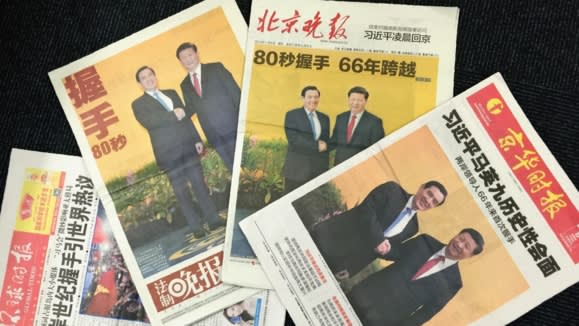 Coverage of the only China-Taiwan summit, held in Singapore in November 2015, took up entire front pages of Chinese newspapers.

Watching the flurry of diplomacy and preparation for the Trump-Kim summit is China's Xi. China is also reportedly considering legalizing gambling on Hainan Island, in southern China. If the measure goes through, Hainan Island would emerge as a rival to Macau as a gambling hub.

Since taking power five years ago, Xi has banned lavish spending by government officials. This has scared away China's high-rollers from Macau, into which Las Vegas Sands forayed in 2004 by opening the Sands Macao. It was the Adelson company's first big step into Asia. Las Vegas Sands also operates the Venetian Macao, a massive luxury resort complex with an artificial waterway and gondolas similar to those in the Italian city of Venice.

But Las Vegas Sands' first quarter earnings indicated that Chinese visitors, especially from the younger generation, were coming back to Macau. The company's adjusted property Ebitda from Macau operations increased 26% to $789 million. Adelson will be keeping a keen eye on Xi's policies.

Also watching the negotiations carefully is Japan, who is moving to develop its first casinos. Las Vegas Sands is a potential developer, and Adelson was in Japan last year.

As dusk sets in on an era of high economic growth, many Asian leaders are currently working with casino corporations to bring gambling resorts to their countries, hoping these parlors draw free-spending international tourists willing to part with their cash. In that sense, Trump, Kim, Xi and Abe all have potential interest in dealing with Adelson.

While denuclearization will no doubt be the headline subject of the upcoming summit, casino diplomacy would be the subplot.