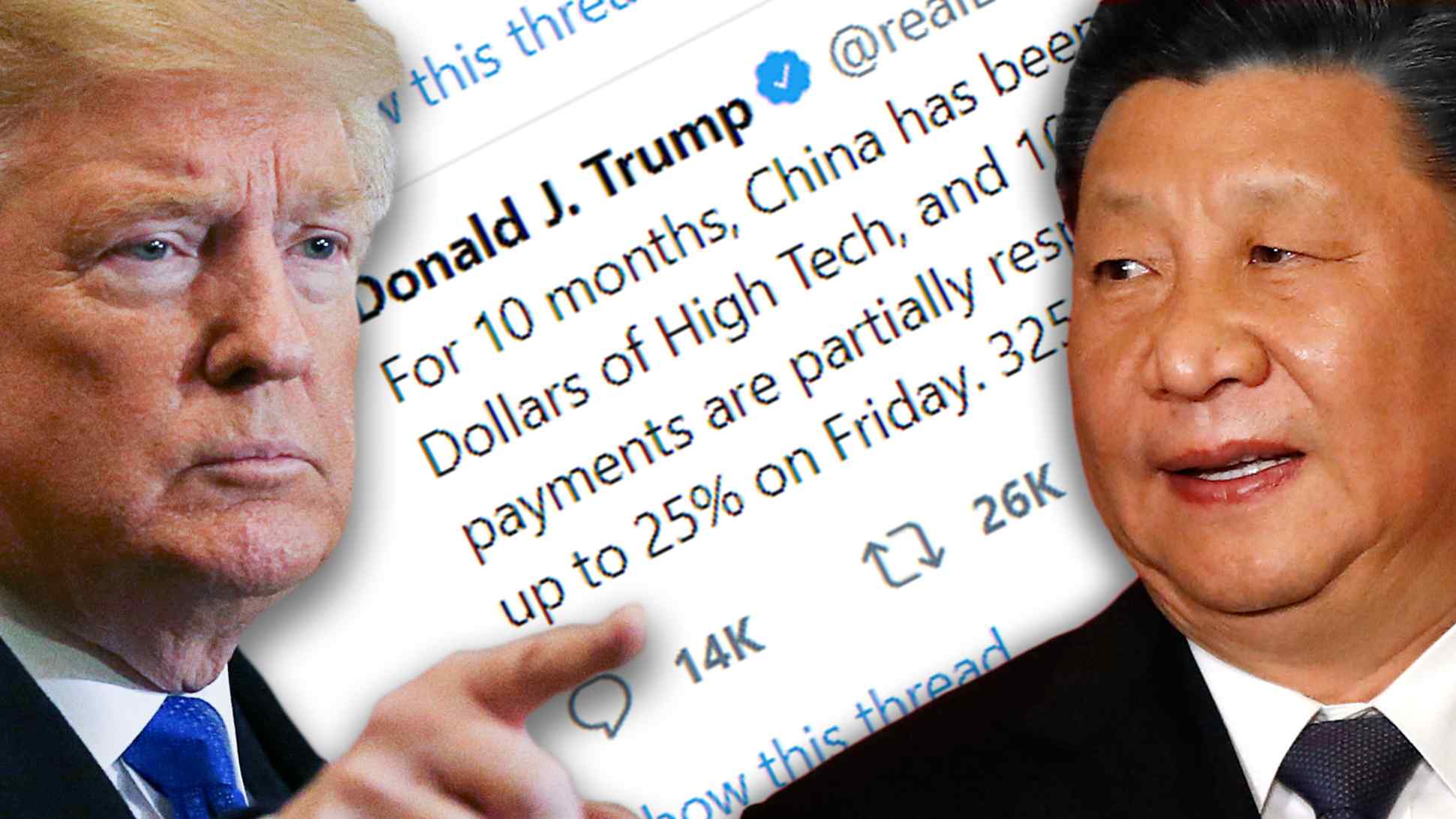 Donald Trump and Xi Jinping are the latest players in a drama that goes back a century. (Nikkei montage/Reuters/Getty Images)
China up close

TOKYO -- Many people in China watched the benchmark Shanghai Composite Index tumble more than 5% on Monday without knowing why.

While China's leadership weighed options and discussed its strategy, the public was left in the dark.

Meanwhile in Hong Kong and Taiwan, where there is still freedom of speech, Chinese intellectuals were holding highly heated discussions on two topics.

One of them was the May Fourth Movement -- a protest against imperialism by students and citizens that began in Beijing's Tiananmen Square and spread across China a century ago.

The other was the U.S.-China trade war and battle for technological supremacy. Trump's surprise remarks about raising tariffs to 25% from the current 10% on Friday made it hard to be optimistic about the marathon trade negotiations ending any time soon.

One intellectual combined the topics. "The clash between the U.S. and China over technology can be traced back to the slogans of the May Fourth Movement 100 years ago."

The May Fourth Movement changed China. It was an anti-imperialist and anti-Japan crusade by patriots dissatisfied with the results of the post-World War I Paris Peace Conference.

Three main slogans were advocated: patriotism, democracy and the promotion of science.

Attaching importance to democracy and the promotion of science in particular was revolutionary. China had struggled as a semi-colony of foreign powers following the 1840-42 Opium War, and the new thinking was meant to lead it toward becoming a modern state. 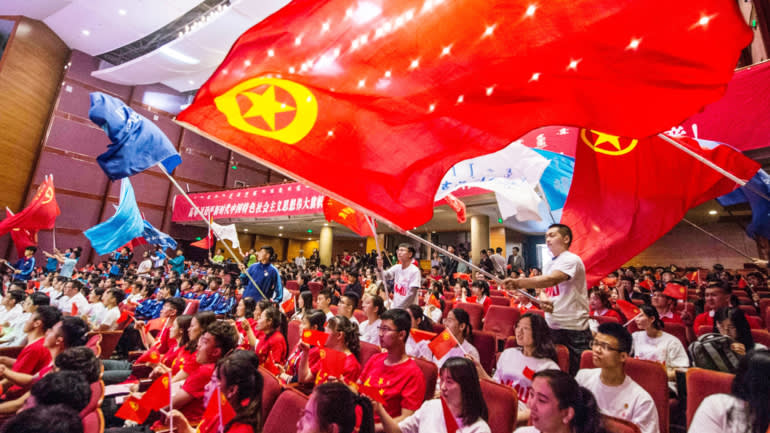 University students show off their patriotism while commemorating the upcoming 100th anniversary of the May Fourth Movement in Hohhot, the capital of China's Inner Mongolia Autonomous Region, on April 22.

Similarly, science was given the nickname "Sai Xiansheng," or Mr. Science.

Two years after the 1919 May Fourth Movement, the Chinese Communist Party was established, in no small part affected by the movement.

This April, Chinese President Xi Jinping delivered a speech in Beijing to commemorate the centenary of the May Fourth Movement.

"Listen to the party and follow the party," he said, repeatedly referring to patriotism.

Xi also referred to democracy in the speech but not in the endearing terms students used a century ago.

Today's Chinese are not allowed to hold demonstrations or freely put forth political arguments of their own. Student demonstrators hold up a banner that reads, "Hello, Mr. Democracy," in Tiananmen Square in 1989.

In 1989 -- or 70 years after the May Fourth Movement -- Chinese students did take to the streets of Beijing and other cities, emulating their 1919 predecessors by holding up "De Xiansheng, Ni Hao" banners. Eventually, the military moved into Tiananmen Square; many deaths resulted.

Were Chinese to take similar action today, it is highly likely they would be detained. A century after the May Fourth Movement, China has moved further from democracy.

Of the three slogans of the 1919 movement, it is science that the Chinese Communist Party attaches great importance to.

Beijing's ambitious "Made in China 2025" plan covers a range of industry-bolstering measures, from space exploration to human surveillance technologies.

Science and technology make up a big part of national policy and are lavished with huge budgetary outlays. 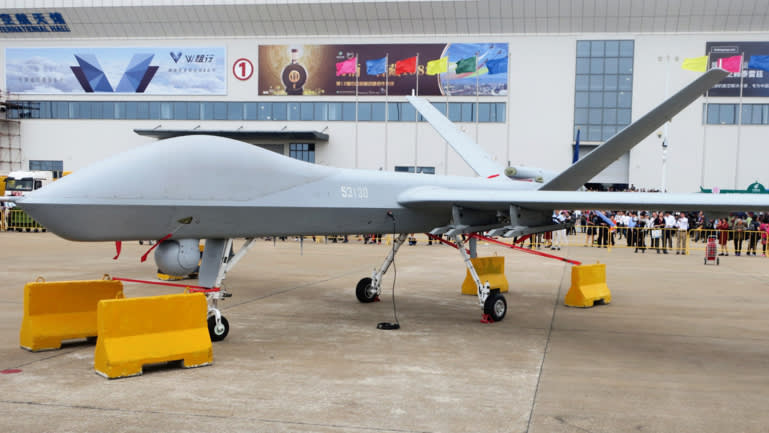 The Chinese government, which has invested large sums of money in high-tech sectors, has begun using the Zhuhai Air Show and other fairs to display the results.

The recent dispute over Huawei Technologies suggests that China and the U.S. are locked in a battle for scientific and technological hegemony.

The U.S.'s staunch opposition to Made in China 2025 reminds the nation of the past aggression it faced from foreign powers. The dream of scientific breakthroughs, cherished since the May Fourth Movement, is under fire from the U.S., which alleges that China engages in forced technology transfers and other unfair trade practices.

Nevertheless, China has had no choice but to make some concessions in the trade talks: A collapse of the negotiations would deal a serious blow to its economy.

But when it comes to issues related to the party's grip on power, China cannot compromise. A comprehensive subsidy system fits into this category; it is aimed at boosting the technological prowess of state-owned and major private companies.

Without the subsidy system, it would become impossible for the party and government to maintain their iron grip on the country.

Xi has called for the establishment of party chapters inside all domestic companies and organizations. But this would be all for naught if the state does not also provide the funds to advance its causes.

Commuters on trains and long-haul buses have to register their ID numbers. Face authentication systems have been introduced at hotels for guests checking in.

With the tight surveillance comes strict censorship, and Trump's pair of tweets were uniformly ignored by Chinese media. Only a fraction of Chinese, those with the means to leap over the Great Firewall, have access to Twitter, Facebook, Google and other parts of the internet.

If information deemed problematic is posted on Chinese social networks, artificial intelligence can be used to issue warnings or delete the material. 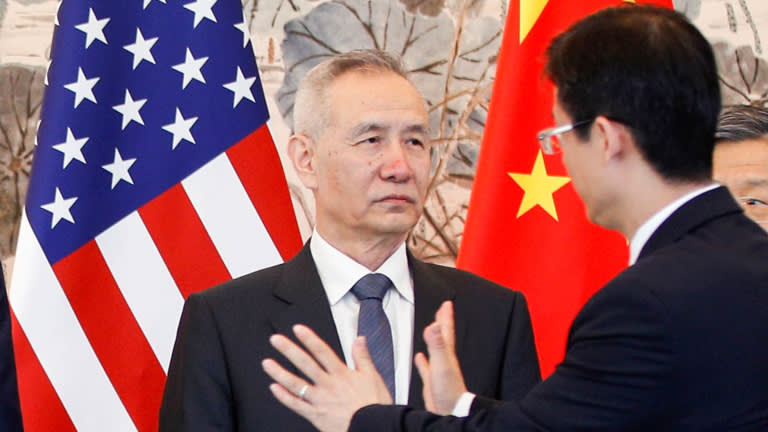 Chinese Vice Premier Liu He finds himself pinned between the need to ward off higher U.S. tariffs and a Chinese Communist Party that cannot tolerate demands to cut off state subsidies to China's corporate sector.   © Reuters

While stock exchanges, a symbol of capitalism, opened in China in the 1990s, the country still has no truly free exchange of information. National governance takes precedence over market-moving tweets.

With China's admission to the World Trade Organization in 2001, it seemed that the U.S. and China would become complementary partners in the age of globalization.

But China has managed to achieve economic growth while leaving the idea of democratization behind and by prioritizing something much more useful to party rule, science and technology.

A hundred years on, China is cherry-picking from the May Fourth Movement's ideals.

Chinese Vice Premier Liu He will arrive in Washington later than initially scheduled for a fresh round of negotiations on Thursday and Friday. He will fight an uphill battle -- convincing the U.S. to reverse its tariff policy before the clock chimes at 12.

But regardless of where the negotiations go, the U.S.-China battle for technological supremacy will continue. The nations and their fundamentally different systems will remain locked in a close mixed martial arts bout for a long time to come.