Chinese President Xi Jinping drinks after proposing a toast at the end of his speech during the welcome banquet for leaders attending the Belt and Road Forum at the Great Hall of the People in Beijing on April 26.   © Reuters
China up close

Trump spoils Xi's Belt and Road Forum, without even attending

TOKYO -- U.S.-China trade negotiations have entered the homestretch as top negotiators concluded a short round of talks in Beijing this week and will reconvene in Washington from May 8.

Whether the world's two largest economies can agree on a deal "historic" enough for U.S. President Donald Trump to declare a success is unclear.

What is clear, however, is that the trade talks weigh heavily on Chinese President Xi Jinping's mind. This unexpectedly became clear at the second Belt and Road Forum for International Cooperation in Beijing on April 25-27.

China staked its prestige on the success of the second Belt and Road summit, and used its diplomatic muscle to bring together top-level leaders from 37 countries around the world, drawing more leaders than the first summit did two years ago.

But missing from the guest list was the most important one. The Trump administration refused to send a delegation to the Beijing gathering, and well-known American business figures stayed away. Even the media center seemed short on American reporters.

It was a significant difference from the first summit and reflects just how contentious the Belt and Road Initiative -- a massive infrastructure plan that seeks to connect China and Europe by highways, rail lines and ports -- has become in the eyes of the U.S.

Xi's opening speech was symbolic. After lauding the initiative's achievements, the tone of the speech changed about midway through.

Xi was clearly not talking to those in attendance, including Russian President Vladimir Putin, but to another set of ears, 11,000 km away in Washington.

He also said that China "will increase the import of goods and services on an even larger scale," "will not resort to the beggar-thy-neighbor practice of yuan devaluation" and "will overhaul and abolish unjustified regulations, subsidies and practices that impede fair competition and distort the market."

These are all central topics in the U.S.-China trade talks. They were not related to China's external aid policy, which would have been a more natural focus of attention at the summit. 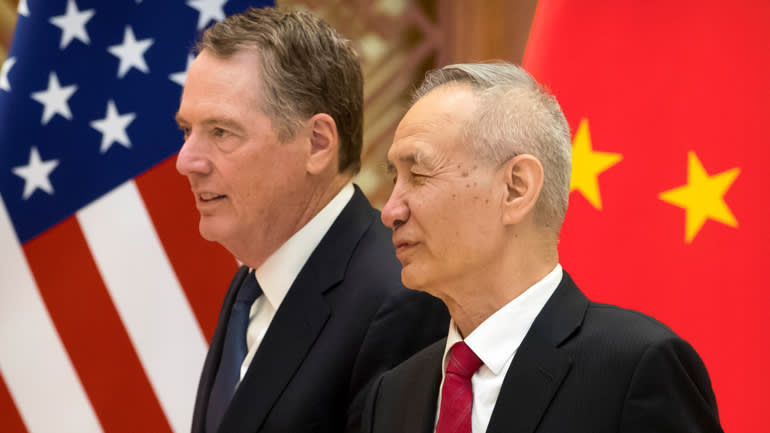 For the Chinese head of state to go into such details at a major international speech was unprecedented. Such policy setting is usually the job of Premier Li Keqiang. But Li does not sit in the command seat for trade talks with the U.S.

"It looked as if the Belt and Road summit was hijacked by measures to deal with Trump," one Chinese source involved in the conference said, heaving a sigh.

China is highly conscious about criticism toward its Belt and Road Initiative from the U.S. and others. Particularly damaging has been an allegation that Beijing is pursuing "debt-trap diplomacy" by saddling foreign countries with heavy debt and wrestling away crucial infrastructure if they do not repay.

China has so far squarely rejected the allegation. Until shortly before the second Belt and Road summit, China had denied the debt trap theory each time as a "false rumor."

Surprisingly enough, China has changed its confrontational tone on the issue.

China's external propaganda for this year's summit was also fairly restrained, compared with the over-the-top public relations campaign for the first summit two years ago.

A central architect of these significant changes is Vice Premier Liu He, one of Xi's closest aides.

Liu, who presides over trade negotiations with the U.S., kept a low profile at the summit, but his fingerprints could be seen covering its talking points.

Addressing the debt-trap criticism, China spoke of issues such as "consideration to the fiscal sustainability of partner countries" and "high-quality infrastructure development."

Furthermore, the closing remarks of Xi's speech at the summit were also noteworthy. As is the case with most Chinese leaders' speeches, the key message was inserted at the end.

"We hope that other countries will also create an enabling environment of investment, treat Chinese enterprises, students and scholars as equals, and provide a fair and friendly environment for them...," Xi said.

China's intentions are easier to understand by replacing the term "other countries" with "the U.S."

Xi was making a plea to Washington to improve the current situation facing Chinese companies, students and scholars in the U.S., where many Chinese scholars are having their visas revoked and visa applications rejected or obstructed in the U.S. According to Chinese media reports, at least 280 Chinese scholars have received unfair treatment.

Chinese students and companies, such as Huawei Technologies, have also become the subject of harsh scrutiny in the U.S., dealing a serious blow to China.

Xi's promises of addressing U.S. trade concerns earlier in the speech were a prelude to this plea.

Will China's flip-flop be accompanied by specific and significant concessions to the U.S.? Or will it prove to be nothing more than posturing? The answers will probably become clearer in the coming weeks of May and June.

Looking back, it has been a strange twist of fate for the Belt and Road Initiative, which China unveiled in 2013.

Unable to join the then U.S.-led Trans-Pacific Partnership, which set a high bar for member economies, China concluded that it would be difficult to secure interests in the Pacific and chose instead to look west to expand its own economic sphere.

Strengthening relations with Central Asia, Eastern Europe, Southeast Asia, South Asia and Africa was, in a way, avoiding a head-on clash with the U.S.

But the perception toward the initiative changed dramatically in 2017, when Xi revealed a long-term view of overtaking the U.S. in terms of economic power as early as 2035.

The ambitious policy was adopted at the Chinese Communist Party's quinquennial national congress that year.

The Trump administration now sees the Belt and Road as a tool China deploys for U.S. containment, a view that was reflected this year when it decided to snub the second forum.

Business leaders from countries such as Japan who attended this year's summit kept a low profile out of fears of drawing an unwanted reaction from the U.S., a dilemma multinational companies operating in both China and the U.S. will face more and more down the road.

It seemed equally uncomfortable for Italian Prime Minister Giuseppe Conte, the only head of state from the Group of Seven major industrialized nations in attendance. 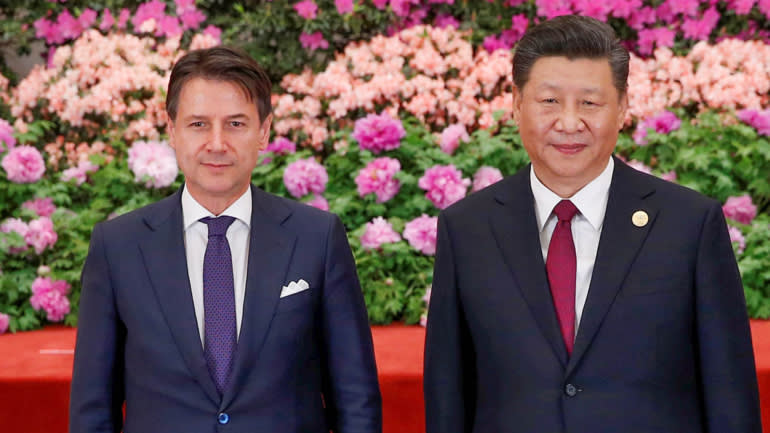 The vast majority of participants in the summit and related events, including Xi, were wearing big yellow "Belt and Road" lapel badges. But the pin was missing from Conte's lapel. Conte is believed to have refused to wear it.

The Italian premier avoided attending the April 26 opening ceremony and chose to arrive in Beijing later, in time for the dinner banquet instead.

At the group photo session, Conte's lapel badge was conspicuously missing, as he stood in the front row. It was as if to say that Italy was ready to join the Belt and Road, but not necessarily share China's values when it comes to freedom and democracy.

Since formally joining the initiative in March, Italy has come under particularly increased scrutiny from the U.S., which has military bases in the country. The lapel badge boycott underscored Italy's difficult position.

While succeeding in attracting new participants such as Italy and Austria, some countries and organizations that attended the summit two years ago were absent this time, including Turkey, Poland, Sri Lanka, Fiji, Argentina and the World Bank. A top Indian leader did not attend either summit.

Strengthening relations with China has its obvious merits, but stances on China have also become domestic political and election issues, even leading to regime change in some countries.

The six-year-old Belt and Road Initiative is a signature project of Xi Jinping's "new era." The tension surrounding the initiative is nothing but a reflection of the power struggle between the U.S. and China that will only intensify in the coming years.