US and China ruin Asian cooperation with their battle for supremacy

25 years on, APEC turns into a finger-pointing exercise

TOKYO -- Twenty-five years after the first Asia-Pacific Economic Cooperation summit in Blake Island, Seattle, the regional forum has degenerated into a battle for influence between the U.S. and China.

"There is a growing sense of community among us," then-U. S. President Bill Clinton said in the leaders' declaration. "Our meeting reflects the emergence of a new voice for the Asia Pacific in world affairs," he added, still fresh in his first year in office aged 47.

Much has changed since then, and the APEC leaders' summit in Papua New Guinea felt quite different this year. For the first time in APEC's quarter-century history, its members could not agree on a joint communique.

The host leader, Papua New Guinea Prime Minister Peter O'Neill, was asked by reporters on Nov. 18, which of the members could not agree on the wording. 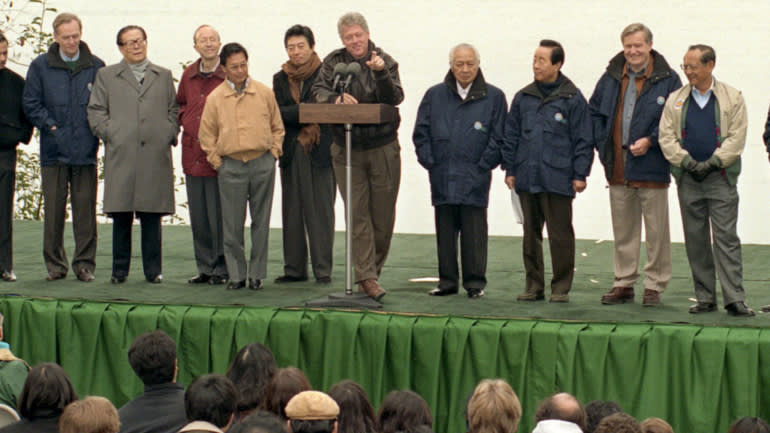 The confrontation between the U.S. and China on the economic and trade front is so sharp that it risks spilling over into security, which would make things much messier.

Trouble was already in the air the previous day, when the APEC CEO Summit was held. Addressing that gathering, Chinese President Xi Jinping said "global growth is overshadowed by protectionism and unilateralism," just seconds into his speech, taking a jab at U.S. President Donald Trump who chose to skip the summit and stay at home.

Furthermore, Xi repeatedly stressed the significance of the China-led Belt and Road Initiative, which is designed to create a massive Beijing-dominated economic zone linking China to Europe by land and sea.

Xi announced that a second Belt and Road Forum for International Cooperation would be held in Beijing in April 2019.

The first Belt and Road Forum was convened in Beijing in May 2017. China managed to gather as many as 29 heads of state, including heavyweights such as Russian President Vladimir Putin. 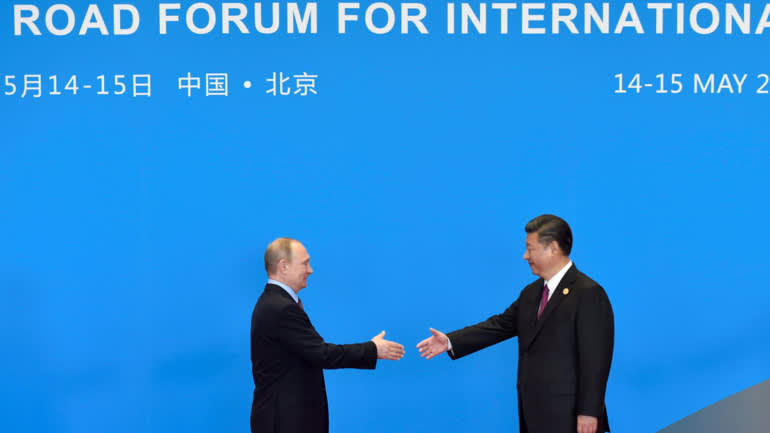 Russian President Vladimir Putin and Xi meet at the Belt and Road Forum in Yanqi Lake, north of Beijing, in May 2017. For China, the forum is an APEC-class event.   © Reuters

For domestic political reasons, Xi apparently wants to attract still more foreign leaders to the second Belt and Road Forum, hoping to gain momentum before an even bigger event for Beijing: the 70th anniversary of the founding of the People's Republic of China next autumn.

An aside: the first Belt and Road Forum was held at the Yanqi Lake International Convention Center, the same venue as the 2014 APEC summit in Beijing, and in the same format. For China, the Belt and Road forum is an APEC-class event that symbolizes Xi's "new era."

Continuously promoting one's own international conference in a multilateral setting like APEC may have lacked modesty. But Xi's close aides attached importance to protecting his authority as a strong national leader who seeks to realize the "Chinese dream" of the "great rejuvenation of the Chinese nation," at this year's APEC summit. Xi delivers a speech at the APEC CEO Summit in Papua New Guinea on Nov. 17. He announced that the second Belt and Road Forum for International Cooperation will be held in Beijing in April 2019.   © Reuters

When Xi first advocated the Belt and Road Initiative in 2013, the initiative mainly targeted countries west of China. Beijing steadily advanced its plans while Washington stood idly by under President Barack Obama.

But the initiative has now begun to target countries south and east of China as well.

Countries in the Western Pacific and South Pacific have joined a growing list of countries along the Belt and Road routes relatively recently, raising concern for the Trump administration.

In Papua New Guinea, China has provided economic support for many projects, including constructing an international convention center and airport runway. When Xi arrived early for the APEC summit, combining the meeting with a state visit before the other leaders arrived, he promised further support for infrastructure projects.

Xi appears to be confident that China is gradually becoming a great power that can be on a par with the U.S. in the Asia-Pacific region. But the Chinese leader took a risky gamble by playing hardball at the APEC summit in Papua New Guinea. As expected, the U.S. responded by hardening its stance.

At the APEC CEO Summit, U.S. Vice President Mike Pence issued a strong warning to China stressing the promotion of a "free and open Indo-Pacific," a vision the U.S. has advocated in partnership with countries such as Japan and Australia.

While China looks north, south, east and west to pursue the Belt and Road Initiative in a bid to expand its influence, the U.S., Japan and Australia are driving their "free and open Indo-Pacific" vision. This will lead to a turf war between the two camps.

Pence said that the U.S. will provide up to $60 billion (about 6.8 trillion yen) for infrastructure development in the Indo-Pacific.

But the turf war is complicated. China is striving to win over Japan as much as it can. Japanese Prime Minister Shinzo Abe, left, meets with U.S. President Donald Trump at the White House in June. When he visited Beijing in October, Abe avoided saying that Japan was cooperating on the Belt and Road Initiative, despite agreeing on joint infrastructure investment.    © Reuters

A glimpse of such Chinese efforts is visible in a commentary published in the Nov. 16 edition of the Jiefang Daily, a mouthpiece of the Communist Party in Shanghai.

Japanese Prime Minister Shinzo Abe's use of language became fodder for the commentary. Ahead of his Southeast Asia and Oceania tour to attend the APEC summit and other meetings, Abe stopped using the term "Indo-Pacific strategy," replacing the word "strategy" with "vision."

Explaining why Abe changed the wording, the commentary cited serious trade friction between Japan and the U.S. It explained that Japan downgraded the strategy to a "vision" because Trump rejected a request to reconsider his tariffs on Japanese products.

What the Chinese side wants to say is that trade friction is fierce, not only between China and the U.S., but also between Japan and the U.S.

China has felt uneasy about the "Indo-Pacific strategy" but has refrained from publicly opposing it. That is because escalating the Sino-U. S. trade war into a security confrontation will put China at a disadvantage tactically.

President Obama shied away from putting strong pressure on China over delicate issues such as the South China Sea and Taiwan. If Trump sets his sights on such security issues in the future, Xi could eventually face a much more serious crisis.

As for its diplomacy toward Japan, China has successfully won over the Abe administration to some extent on the back of strengthening economic relations between the two countries.

But the Trump administration is putting pressure on Japan not to move closer to China on the Belt and Road Initiative, which reflects China's ambitious global strategy.

When Abe visited Beijing in late October, he avoided using the expression "cooperation for the Belt and Road," which the Trump administration dislikes. Instead, Abe said Japan and China will be cooperating in "third country markets."

China's assistance under the Belt and Road banner is significant for the governments of cash-strapped countries. Depending too heavily on China, however, has emerged as a divisive issue in many of them. Needless to say, China media reports to not touch on the negative aspects of the Belt and Road.

Similarly, China imposed strict media controls regarding the APEC summit in Papua New Guinea, initially hiding the truth about the collapse of the APEC summit. The Nov. 18 evening news on state TV did not mention that the leaders failed in issuing a communique due to the sharp confrontation between China and the U.S.

On the day of the APEC collapse, Chinese businesspeople only noticed the seriousness of the situation, based on the bits and pieces of information they saw on social media, citing Western news media.

Their concerns turned to the planned summit between Xi and Trump on the sidelines of the Group of 20 gathering in Buenos Aires at the end of this month. With the economy slowing and stock prices in the doldrums, businesses are desperate for a positive outcome.

Xi too, cannot afford to fail, when he faces off Trump. It will all come down to how to put a positive spin on the deal that is made, and package it as a win.

In that sense, Xi and Trump are playing the same game.