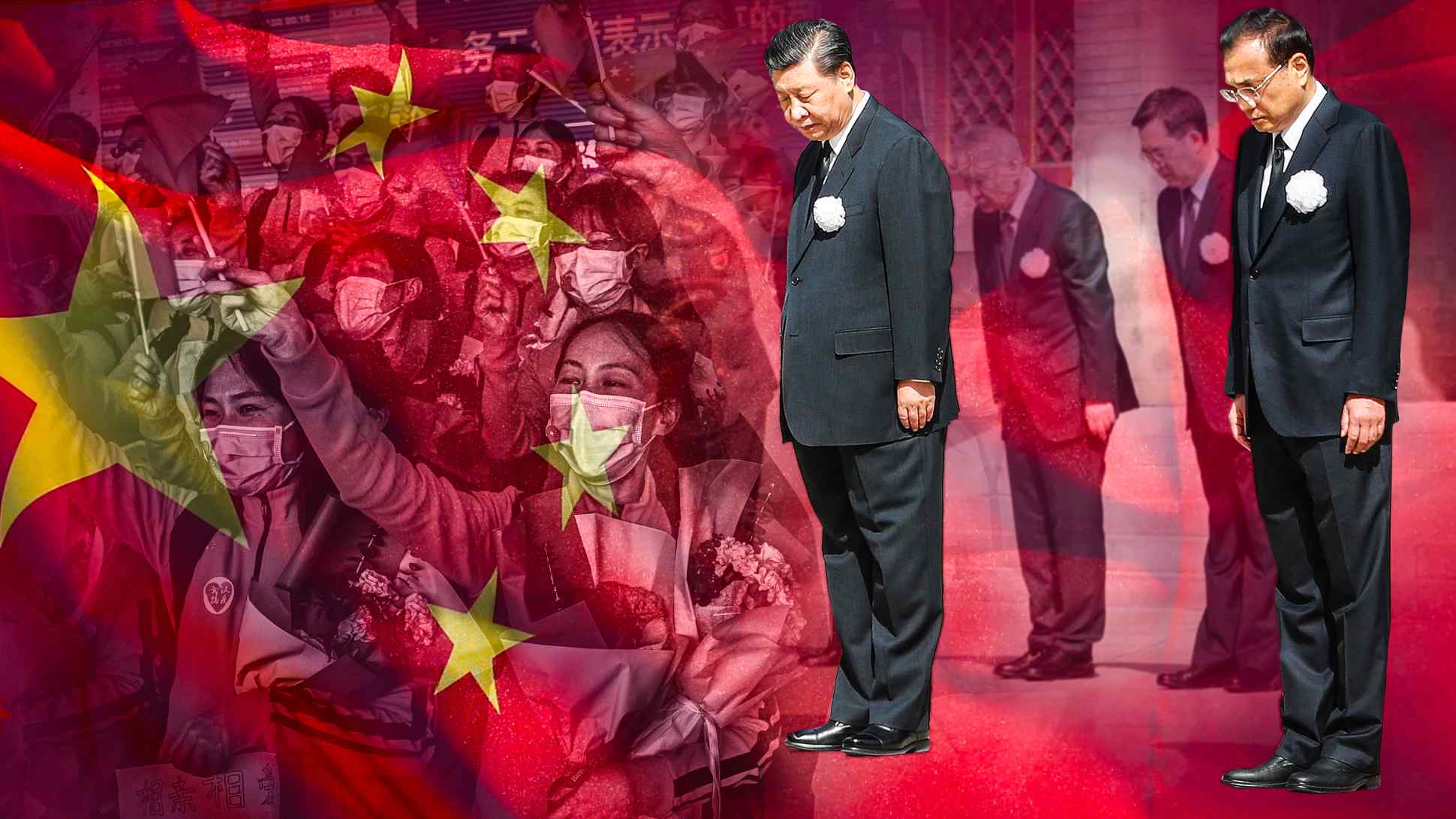 Celebration and mourning. Medical workers from Jilin University cheer before boarding a flight out of Wuhan on April 8. Four days earlier President Xi Jinping and Premier Li Keqiang bow their heads to the coronavirus's victims. (Nikkei Montage; source photos by EPA/Jiji and Xinhua/AP)
China up close

Asymptomatic carriers stand in the way of president's 'exit strategy'

TOKYO -- After 76 days in lockdown, the central Chinese city of Wuhan, the initial epicenter of the novel coronavirus outbreak, reopened its doors allowing planes, trains and cars to leave the city.

But the doors only opened half way. People are still forbidden to fly from Wuhan to Beijing. That is because the capital is trying to hold the delayed annual session of the National People's Congress, China's parliament, to which the country's top officials gather from across the country.

People can only leave Wuhan if they present to authorities proof that they are not a contagion risk. Meanwhile, within the city, strict restrictions remain on where people live and how freely they can move about.

And while China reported no new deaths on Tuesday, the first time since January, people are generally cautious about venturing out and remain skeptical about the numbers.

Fueling those concerns are the repeated calls by Premier Li Keqiang to report figures accurately.

"There must not be any cover-up or underreporting just for the sake of keeping the number of new cases at zero," he has said since late March. "All subnational governments must release epidemic information in a fact-based, open and transparent manner."

The strict instructions suggest that there are indeed such cover-ups and underreporting taking place. 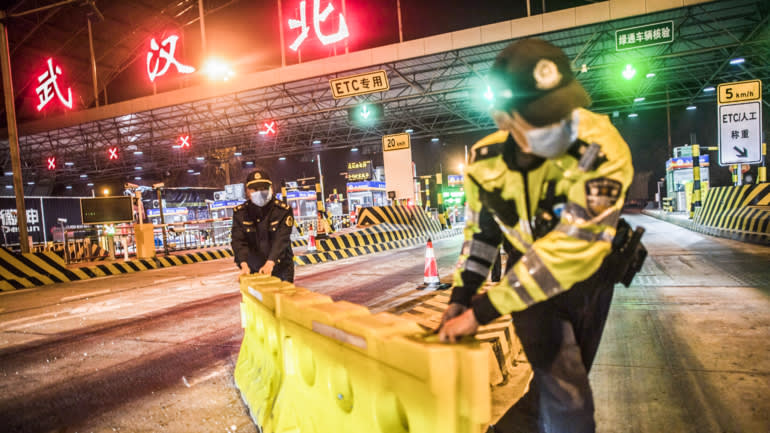 A highway barrier is moved away as Wuhan opens back up. The city's residents remain generally cautious about venturing out, partly due to widespread skepticism regarding official tallies of new infections.   © Xinhua/ Kyodo

The euphoria over what was touted as "great success in containing the plague" is now being replaced by a sense of caution.

"The central government has returned to a policy of caution after Premier Li talked about prohibiting doctored statistics and fake reports," said a source familiar with university affairs in China. "The reopening of schools nationwide has also been postponed."

The Chinese leadership today is torn between whether to continue to concentrate its efforts on containing infections and persevering in a prolonged battle against the virus or to shift its focus to revitalizing its economy through a bold easing of restrictions on people's movements.

President Xi Jinping, China's top leader, seeks to kill two birds with one stone by achieving both simultaneously. But his natural inclination is to shift to economic reconstruction. This has been clear since late February, when China began to trumpet the success in containing infections.

For Xi, this year's economic performance is especially important as he enters a critical run-up to the Chinese Communist Party's next national congress in 2022, where he seeks to stay in office and form a new team of leaders around him. Next year is also a big year as it marks the centenary of the party's establishment.

The first step for Xi to put the economy back on track is to convene the National People's Congress at a relatively early date so that he can turn the nation's focus fully on economic reconstruction.

If he is to do so, China needs to see no new coronavirus cases for a certain period of time. It is highly possible that the politically savvy local bureaucrats, fully aware of Xi's needs, lined up to report rosy numbers.

Premier Li has a different perspective. He has been put in charge of the Central Leading Group on Responding to the Novel Coronavirus Disease Outbreak. Chinese Premier Li Keqiang addresses medical staff at Wuhan Jinyintan Hospital back in January. He appears to have prevailed in a recent debate about counting asymptomatic virus carriers in official tallies.   © Xinhua/ AP

While the premier is traditionally in charge of the country's economy, Xi has largely taken that role by naming himself to lead many committees that run the world's second-largest economy. Li, therefore, is focusing on containing COVID-19 from spreading further.

Xi and Li already had a delicate relationship. Li is a superelite hailing from the party's Communist Youth League, a gateway to Chinese leadership. He was once tipped as a strong candidate to take the party's helm. But Xi, a little-known dark horse, beat him to it.

Nearly seven and a half years have passed since then and clearly Xi has established himself as the undisputed leader of the party and country.

Yet Xi cannot let his guard down when it comes to dealing with Li.

Underlying the tension is one simple fact. Li's age.

According to conventional wisdom, Li will step down from the government post of premier in an annual session of the National People's Congress in the spring of 2023.

But Li will still be 67 when the Communist Party holds its next national congress, in the autumn of 2022, one year younger than the retirement age of 68 under an unofficial party rule.

Therefore, it is still not certain that Li will actually retire from the seven-member Politburo Standing Committee, the party's top decision-making body, at the next national congress.

For Xi, who is aiming to retain his top position, how to treat Li in two years' time is one of the most difficult issues he faces.

A Chinese source familiar with the atmosphere in Beijing's Zhongnanhai area, where Xi, Li and other leaders have their offices, analyzed the current situation.

"The top two have considerably divergent views precisely because they are in different positions in the first place," the source said. "But they have now reached common ground."

The tentative compromise is in the national count of asymptomatic carriers of COVID-19, the source said. "Those infected people had previously not been included in official statistics but have now begun to be announced."

At first glance, it seems that the move to count such people in official figures came after Li argued the case and Xi backed down, for now. But it is too hasty to conclude that it is a simple victory for Li.

Xi is seeking to hit the twin targets of winning the battle against the virus and revitalizing the economy.

The latest studies show infected people who have no symptoms and are in good health are spreading the virus. If asymptomatic carriers, a big issue globally, trigger a fresh wave of infections, China will not be able to even think about economic reconstruction.

A fresh wave of infections would also make it impossible for China to declare a complete victory in the fight against the virus at home and bask in the glory of taking the lead in international prevention measures.

Chinese statistics have also been questioned by U.S. President Donald Trump. Xi is believed to have decided to reduce political risks by correcting statistical mistakes early and to adjust how asymptomatic infected people are counted.

Knowing that it would be difficult to hold this year's annual congressional session at an early date, he has, in effect, hedged his bets. One notable anecdote in this process was a scoop in the Hong Kong-based South China Morning Post that said more than 43,000 people in China had tested positive for coronavirus without immediate symptoms and had been excluded from official statistics as of the end of February.

It would push the number of infections in China above 120,000.

But one media researcher in Hong Kong said, "This scoop is not one that the Chinese Communist Party and government would dislike."

Indeed it may very well have been a government leak, the researcher said, as part of a plan to disclose the grave issue in Hong Kong, draw global public attention and then take the decisive step of announcing asymptomatic people quickly.

The SCMP was acquired by Alibaba Group Holding four years ago. The Chinese e-commerce giant's founder is Jack Ma, whose party membership was disclosed after being kept under wraps for many years.

The Chinese government began to announce the number of new asymptomatic cases on March 31. The total number is now approaching 500.

But the Chinese government has not been as bold as to adjust past statistics and take into account the tens of thousands of asymptomatic people. It is risky, therefore, for researchers around the world to use Chinese figures, which are still based on different standards.

In a meeting that Premier Li attended on Monday, there was another revelation that requires attention.

Participants in the meeting said that confirmed cases entering China by crossing land borders have outnumbered those entering the country by airplane. Let that sink in.

Through its vast land border with Russia to its north, and from countries to its southwest such as Myanmar, Laos and Vietnam, people carrying coronavirus are entering China. Many of those may be going in undetected.

A little leak could sink a great ship.

So while the lockdown in Wuhan has been lifted, with the threat of asymptomatic cases and an inflow of cases through land borders, life in China is hardly back to normal.