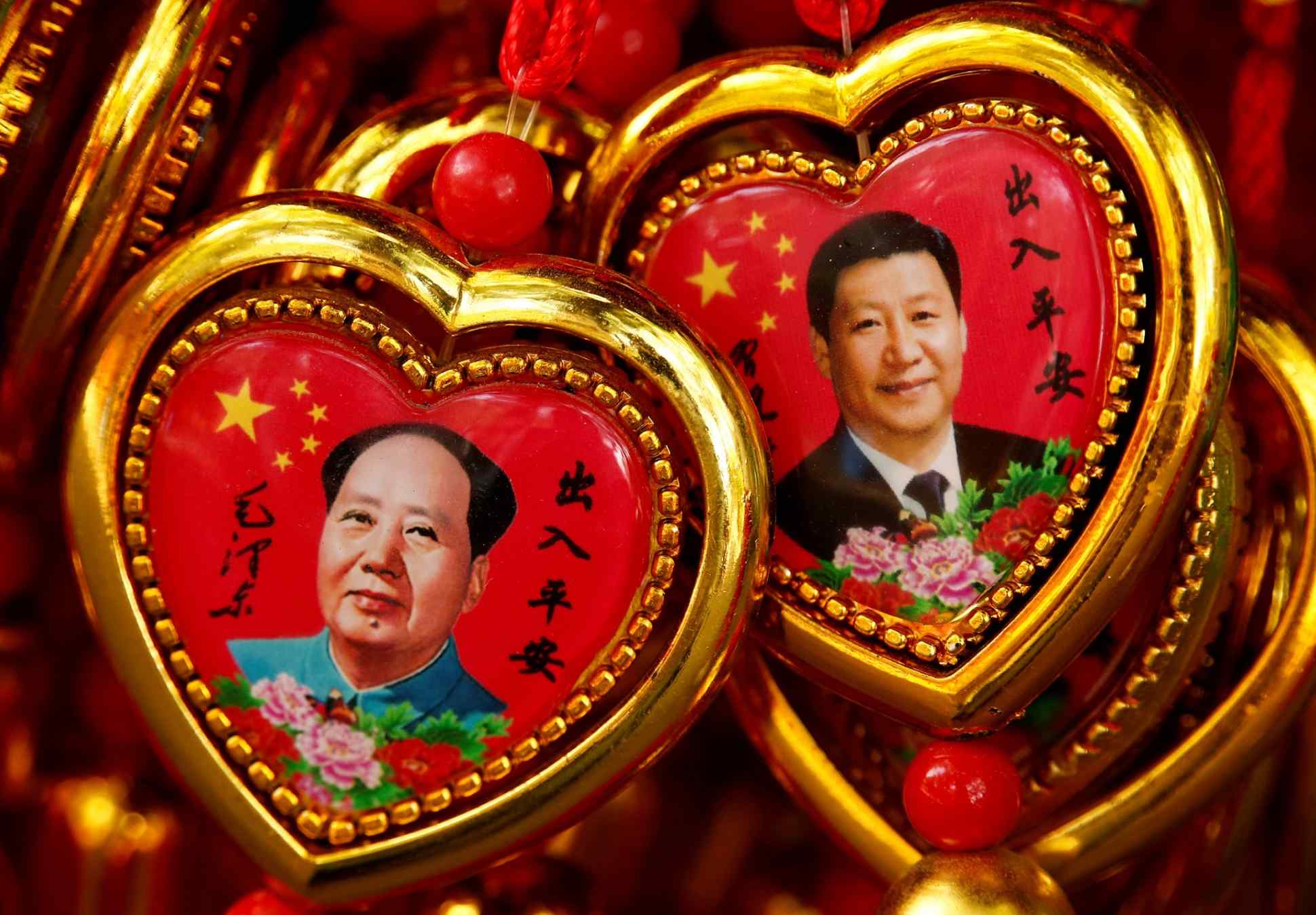 Xi visited Liaoning, Jilin and Heilongjiang, accompanied by Liu He, a close aide and the vice premier in charge of economic policies. The tour came immediately after U.S. President Donald Trump imposed a fresh round of punitive import tariffs on $200 billion worth of Chinese products.

The plant was built shortly after an armistice halted fighting in the 1950-1953 Korean War -- and after the surviving Chinese "volunteer soldiers" who had crossed the Yalu River to fight on behalf of North Korea returned home. The factory was to help China prepare for a long struggle with its enemy, the U.S.

Construction of the frontier plant was prioritized under China's first five-year national development plan, which was launched to realize a Soviet-style planned economy. Effigies of Mao Zedong are not as common as they used to be, but this one still stands in front of a state-owned heavy machinery maker's plant in in Qiqihar, Heilongjiang Province.

A giant statue of Mao Zedong, who led China into the Korean War, stands in front of the plant. The effigy of Communist China's founding father is one of China's largest stainless statues.

Mao statues once proliferated in China but gradually went into decline after the 1966-1976 Cultural Revolution, which caused tremendous suffering.

In Harbin, Heilongjiang's capital, a Mao statue was brought down and "buried" after the Cultural Revolution.

There are not many state-owned companies under the direct control of the central government that still proudly display Mao statues.

When it changed course, the Chinese Communist Party vowed to never repeat the madness that erupted out of the personality cult that had been built up around Mao.

That vow looks to have weakened under Xi.

When the president, who doubles as party chief, visited the China First Heavy Industries plant on Sept. 26, he inspected an independently developed 15,000-ton hydraulic press. He used the occasion to say it is becoming increasingly difficult for China to obtain advanced technologies on the global market.

"High quality development of the manufacturing sector, in particular that of equipment manufacturing, plays a major role in China's drive toward high-quality economic development and is indispensable for a modernized nation," Xi said. "China must stick to the path of self-reliance amid rising unilateralism and protectionism in the present world."

It was a surprise instruction, and it made Xi look as if he were putting an old policy -- zi li geng sheng, or self-reliance -- into action. Mao strongly advocated for zi li geng sheng all the way up to the Cultural Revolution.

Xi's call for China to survive on its own without relying on the outside world sounds anachronistic. It comes despite Xi's earlier call for the need to "steadfastly safeguard" the free trade system.

Furthermore, Xi's instructions were given from a factory of a state-owned company under the direct control of his government -- a plant next to which a towering Mao statue still stands.

By doing so, Xi sent an implicit message: "I will never bow to Trump."

Xi's tour of northeastern China also reflects China's rivalry with the U.S. on the security front.

In Liaoning, Xi inspected the 79th Group Army. Wearing a helmet, he sat in the pilot seat of a state-of-the-art combat helicopter and moved the aircraft's machine gun. In China, it is unusual for a national leader, let alone the top leader, to give such a performance.

China is advocating a "military-civil fusion" in technology development. It boasts world-class technologies in some sectors.

But when Xi's remarks about the need for self-reliance were reported in the People's Daily, the party's mouthpiece, they had been tweaked.

The paper deleted the line referring to the difficulty of obtaining advanced technologies internationally.

The reference ran the danger of being misunderstood and lending weight to U.S. allegations that China has been gaining trade secrets and technologies via espionage and forced transfers.

Xi's words would therefore play right into Trump's hands. And China does not want to lose face.

Something else was missing from Chinese news footage and photographs of Xi's visit to the northeast -- Mao's statue outside the factory.

Xi's visit to the northeast, China's breadbasket, also coincided with harvest season, which allowed Xi to show off China's abundant food supplies. In reality, however, ordinary Chinese depend heavily on imports for the essential ingredients that go into their everyday meals.

China's soybean self-sufficiency rate is particularly low, at around 10%. A considerable portion of cooking oil in China is made from soybeans imported from the U.S. and Brazil. It is now impossible for China to independently meet its own soybean demand.

Nevertheless, China has levied retaliatory import tariffs on U.S. soybeans as it tries to match the U.S. tariff for tariff. Xi's trip was a publicity stunt, but a necessary one aimed at quelling public concerns about food security.

Trump, meanwhile, has stepped up his anti-China rhetoric.

At a United Nations Security Council meeting he presided over in September, Trump accused China of interfering in the upcoming U.S. midterm elections.

"Regrettably, we've found that China has been attempting to interfere in our upcoming 2018 election, coming up in November, against my administration," Trump said, without offering any evidence.

Striking an acrimonious tone, Trump added, "They do not want me or us [Republican Party lawmakers] to win because I am the first president to ever challenge China on trade."

Later in September, Trump took his China bashing to Twitter. "China is actually placing propaganda ads in the Des Moines Register and other papers, made to look like news."

The photo in the tweet shows the front page of a ChinaWatch insert that was tucked into the paper of record for Des Moines, a city in the U.S. farm belt state of Iowa.

ChinaWatch is an English-language newspaper affiliated with the Chinese Communist Party.

Trump's verbal and social media swipes at China are more than intimidation. "Maybe he's not [my friend] anymore," Trump said during a news conference in New York on Sept. 26, referring to Xi, although he had called the Chinese president a friend and a great leader he respects not long before.

In Liaoning, Xi visited a memorial hall for Lei Feng, a soldier Chinese officials often hold up as a role model for the generosity and altruism depicted in his diary. During the Cultural Revolution, Mao would praise the memory of the "People's Hero" who died a young soldier.

Now Xi is doing likewise. Last month, he called Lei Feng "a model of the time," saying the Lei Feng spirit is "ever lasting." The president added that China needs new role models if it is to achieve national rejuvenation.

"We should learn from Lei's spirit and practices to turn lofty ideals, convictions and moral qualities into concrete actions in ordinary life and work, and make our due contributions so as to carry on the Lei Feng spirit for generations," he said.

This is not the first time Beijing has urged the public to learn the "spirit of Lei Feng." Previous Lei Feng campaigns were carried out when China felt the international community had backed it into a corner.

This was the case after June 4, 1989, when Beijing was stung by the global reaction to the Tiananmen Square incident, in which the Chinese military suppressed pro-democracy student protests.

The West slapped economic sanctions on China, putting the communist regime in a bind. Beijing responded by urging the public to endure by learning the spirit of the exemplary soldier.

Xi's tour of the northeast was reminiscent of Mao. But Xi has taken a potentially risky step by emulating Mao's call for zi li geng sheng. 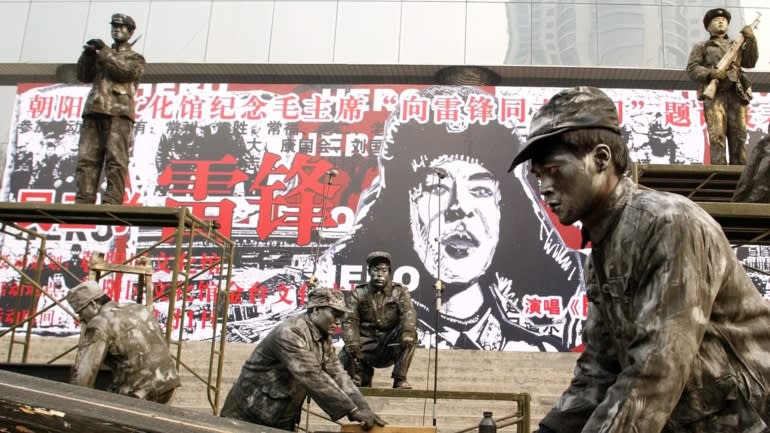 Actors dressed as soldiers and workers exhort their Beijing audience to be more like Lei Feng, whose portrait can be seen in the background, during a propaganda campaign in 2003.   © Reuters

This year marks the milestone 40th anniversary of China's "reform and opening-up" policy, initiated by then supreme leader Deng Xiaoping. The policy paved the way for China's rapid economic development.

Forty years ago, China began taking the steps that would deliver it from Mao's rigid planned economy. One of these steps was the strict ban on Mao-like personality cults.

The policy not only acted as an escape mechanism, it put China in position to grow into the world's second-largest economy, after the U.S.

The past four decades have made it clear that if China were to revert to Mao-style rule, its economy would no longer point to a bright future.

Xi's call for self-reliance has reminded many ordinary Chinese of Mao's time and left them feeling uneasy.

After Mao began to loudly chant "zi li geng sheng," China suffered through two political upheavals. First came the 1958-1961 Great Leap Forward, which is said to have victimized as many as 30 million Chinese. That was followed by the 1966-1976 Cultural Revolution.

Only those in their 50s or older know of both tragedies as well as the benefits of the reform and opening-up policy. They have the experience that perhaps young Chinese lack. They know how to endure.

Many in the younger generations have grown up in affluence and do not know how to respond to abrupt calls to emulate the mysterious Lei Feng.

At a glance, China appears to be steaming ahead. But a closer look shows the country is going through its most difficult phase since the turn of the century.