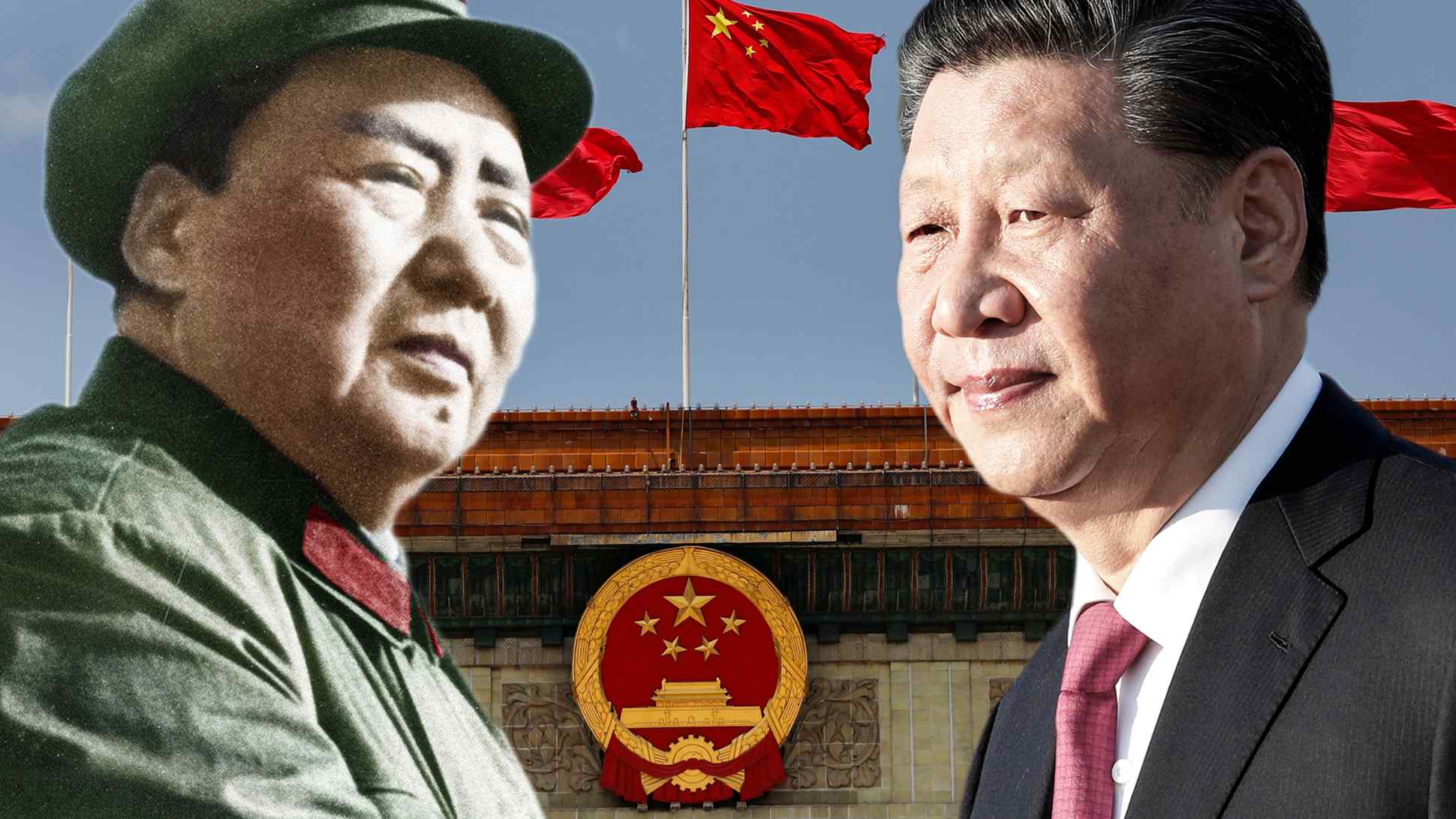 Former Chinese leader Mao Zedong ruled until his death at 82. Many think President Xi Jinping is eyeing the possibility of staying in office until 2035, when he too will be 82-years-old. (Nikkei montage/AP/Reuters/Getty Images)
China up close

TOKYO -- At the end of last month, the Chinese Communist Party announced it will convene a key policy meeting in October.

"The fifth plenary session of the 19th Central Committee of the Communist Party of China will be held in Beijing in October," the Xinhua article read.

Attendees will assess the proposals for the next five-year plan that spans 2021 to 2025 "and future targets for 2035," it said.

For China watchers around the world, the second half of that sentence is a coded message that could not go unnoticed.

"President Xi Jinping really does intend to stay in power for the long run," one political pundit said. "This must be, in effect, the manifesto for the next 15 years."

While China has modernized over the years, it still retains some remnants of its socialist planned economy era, including the formulation of five-year plans. Therefore, the decision to discuss a new plan comes as no surprise.

But to plan for a decade beyond that, all the way to 2035, does not come from any textbook, and it raised many eyebrows. 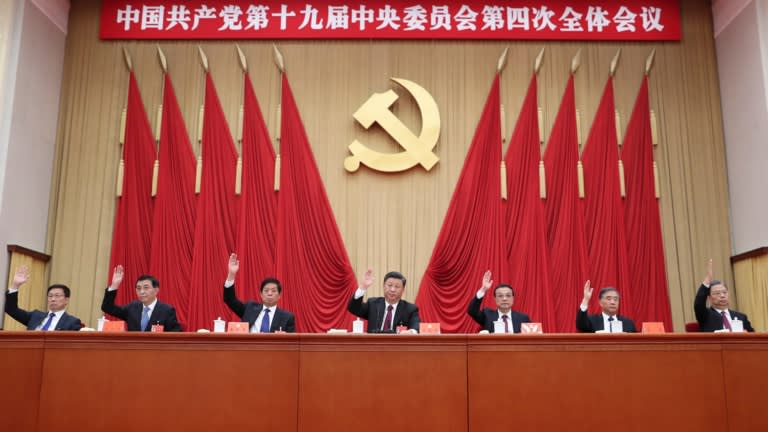 Chinese President Xi Jinping, center, is seen with other members of the Politburo Standing Committee in Beijing.    © AP

In a world where the near future is becoming increasingly unclear, especially as the coronavirus pandemic rages on, looking 15 years down the road is far-fetched, even for the strategic-thinking Chinese. It would be equivalent to drawing up three five-year plans in one stroke.

What political intentions lie behind the move? Veteran party officials will easily realize what they are.

Upon hearing about the ultra-long-term plan for 2035, one political pundit reacted by citing a quote by Zhuge Liang, the master strategist from the Three Kingdoms period.

It was a slogan the top bureaucrat liked to use to express his resolve when he went to war.

Doing one's best until one's death might sound like a compliment to Xi's resolve, but the reality is this pundit was speaking sarcastically in a way unique to China.

The key here is Mao Zedong, the founding father of "new China," who reigned over China until his death at 82.

Mao was the "eternal chairman" of the Communist Party. By comparing himself to Mao, Xi is trying to pave the way to becoming the second leader to stay in power for life.

Naturally, not everybody in the party is thrilled with Xi's daring ambition. Those opposed to his ultralong reign cannot speak out loudly but occasionally attempt to put up resistance using various methods, perhaps circling around like a bee looking to sting.

"Things are moving too soon," one veteran party source said. Already in July the party has decided what to discuss in an October meeting, he noted. Chairman Mao Zedong makes a report at the second Plenary Session of the Seventh Central Committee of the Communist Party of China in 1949. (AP Photo/Hsinhua News Agency)   © AP

According to the communist calendar, this summer will be a crucial period that will affect the future of the Xi Jinping era.

That is because ahead of the next quinquennial party National Congress in 2022, it will be this year, not next, when the framework of the discussions will come together. The prelude to a full-scale political battle over the 2022 national congress is already underway.

In some cases, the outline of key personnel changes at the congress, including specific names, will be discussed this year.

From Xi's standpoint: Victory goes to the one who makes the first move.

Certainly now is not the time to play defense. With the domestic economy in the doldrums and relations with the U.S. in tatters, Xi would not be able to make much of an argument if he were defending himself in front of party elders.

If Xi can make people think that his status will be secure, overseeing the party's national congresses in 2022, then in 2027 and even in 2032 as China's de facto top leader, party members, including those who do not belong to Xi's faction, will come to heel en masse. They will serve the powerful for their own good at the end of the day.

On the other hand, Xi's boldness could backfire, resulting in an even harsher feud with rivals. If party elders or rivals see this summer as their last chance to make their case, there is no shortage of topics with which to go after him. An aerial view of workers building a utility tunnel, a passage built underground or above ground to carry utility lines such as electricity, steam, water supply pipes, and sewer pipes, at the Xiong'an New Area.   © AP

Looking back, Xi was also on the offensive at the party's last national congress, in 2017.

Shortly before the event, Sun Zhengcai, then the top official of Chongqing and a candidate to succeed the top leader in the future, fell victim to Xi's signature anti-corruption campaign.

At the party's 2017 congress, five years after he took the helm of the party, Xi also succeeded in doing something that was thought to be impossible: enshrining his eponymous ideology in the party's constitution.

In China today, many governmental programs have completion dates of 2035. The Xiong'an New Area, a massive new city in Hebei Province, is among them. The project is proceeding with Xi's full backing.

Last month, Xi declared that the BeiDou Navigation Satellite System, China's answer to GPS, had formally started global operations. A Chinese official in charge of the system has made clear that it will be upgraded by 2035. Xi attends the completion and commissioning ceremony for the Beidou Navigation Satellite System in Beijing on July 31.   © AP

Chinese officials are publicly referring to "Made in China 2025" much less frequently now that the blueprint for upgrading the country's high-tech industries has come under fire from the U.S. This shows a certain degree of consideration to the international political situation.

But the ultra-long-term plan for 2035 is at the core of Xi's politics, and China will push ahead with it regardless of Beijing's external relations if domestic politics demand it.

Naturally, China's confrontation with the U.S. will intensify.

In mid-July, Chinese netizens prematurely celebrated the culmination of a long-held dream. The country's April-June gross domestic product, it was believed, had finally overtaken that of the U.S.

"The great rejuvenation" had happened, they said, and the country had regained its status as the world's top economy, which it had held before being defeated by the U.K. in the 1840-1842 Opium War.

This turned out to be incorrect due to miscalculations over month-on-month comparisons and year-on-year growth rates, but it is true that China is closing in on the U.S. in terms of economic size.

"No country or individual can stop the historical pace of the great rejuvenation of the Chinese nation," Xi has repeatedly said, reflecting his confidence that China will be able to overtake the U.S.

His supporters would say that extending his reign until 2035 is a necessary component to realize "the great rejuvenation of the Chinese nation." The cursed year of 2020 means little to the leader, if he is thinking in much longer time frames.

Would his plan really be accepted under the current circumstances? A tentative answer to this question will become clear when the fifth plenary session concludes in October.