Xi-Kim honeymoon exposed as a facade

TOKYO -- Things have changed dramatically in the past two months.

As recently as July, speculation was rife among foreign diplomats in Beijing that Chinese President Xi Jinping would make an official visit to Pyongyang and attend a military parade to commemorate the 70th anniversary of North Korea's founding.

At the time, Chinese government and Chinese Communist Party officials were noncommittal but many appeared to think that Xi would make his first visit to North Korea since becoming party chief in the autumn of 2012.

The parade took place on Sunday. Xi was a no-show.

"Relations between China and [North] Korea are being tossed about by [U.S. President Donald] Trump," said one person with connections to the party.

"There are various things," another said. "Unexpected things have happened."

China on Sept. 4 announced that Li Zhanshu, one of the seven members of the Politburo Standing Committee, the party's top decision-making body, would visit Pyongyang for the extravaganza as Xi's "special representative."

But it would have been natural for Xi to visit Pyongyang. A week after North Korean leader Kim Jong Un and Trump held their historic summit in Singapore on June 12, Kim visited Beijing and made a show of his relationship with the Chinese president. Reciprocating would have made diplomatic sense.

It also would have been politically expedient for Xi to attend the parade, at least in one regard. China cannot stand idly by if the U.S. and North Korea trudge toward normalizing diplomatic ties. China needs to prepare for Xi to visit North Korea to avoid being locked out of the cockpit as the Korean Peninsula charts a new course for itself.

The atmosphere surrounding Xi's possible North Korea visit changed after the CCP's annual conclave at the seaside resort of Beidaihe, in Hebei Province, in the first half of August. There was intense debate in Beidaihe about Xi visiting Pyongyang for the parade.

Not surprisingly, the main focus of the debate was on how Xi's possible visit to North Korea might affect China's difficult relations with the U.S.

In the second half of August, China dispatched a vice ministerial-level delegation to Washington to resume trade negotiations. As expected, the session failed to produce results, and on Aug. 23, the Trump administration imposed a second round of punitive tariffs on Chinese imports.

Trump was not finished. In a last-minute move on Aug. 24, the U.S. president canceled Secretary of State Mike Pompeo's planned trip to North Korea.

In a Twitter thread, Trump appeared to at least partially blame Beijing for Kim's reluctance to give up his nuclear weapons. China is not "helping with the process of denuclearization as they once were," Trump tweeted. His next tweet said: "Secretary Pompeo looks forward to going to North Korea in the near future, most likely after our Trading relationship with China is resolved."

While China said it immediately lodged a protest through diplomatic channels with the U.S. over Trump's remarks, Chinese media has never directly criticized Trump personally. This is a calculated move, intended to leave room for direct negotiations with Trump.

Were the Chinese government to directly attack Trump's character, it would risk inflaming anti-U.S. sentiment among Chinese and potentially triggering anti-U.S. demonstrations.

This would make it impossible for the Chinese government to offer concessions to the U.S. in the escalating trade war.

For the Chinese government, the top priority has been maintaining ties with the U.S. This is incomparably more important than its traditional friendship with North Korea.

And there were rumors that intercontinental ballistic missiles, purportedly capable of carrying nuclear warheads, would make an appearance in Sunday's parade. If Xi had been on hand to review North Korean troops and wave to the crowd at Kim's side as ICBMs rolled by, he would have sent a message to the rest of the world: China officially approves of North Korea's nuclear weapons program.

In March, China opted to rapidly move closer to North Korea. That month, Kim made a surprise visit to China for talks with Xi. It was the North Korean leader's first overseas trip since coming to power in late 2011.

China wanted to outflank the U.S. ahead of the Trump-Kim summit, which was set for June and had caught Beijing off guard.

Sino-North Korean relations used to be touted as "cemented in blood" because Chinese "volunteer soldiers" fought on the North's side in the Korean War. More than 100,000 Chinese died in the fighting.

China is a signatory to the armistice that put that war on hold, along with the U.S. and North Korea. South Korea refused to sign the deal.

Beijing suspects North Korea is plotting to sideline it as Pyongyang and Seoul work toward a framework for officially ending the war.

A joint declaration issued April 27 after Kim and South Korean President Moon Jae-in held a summit at the inter-Korean borders referred to a trilateral framework for ending the Korean War -- as well as to a quadrilateral framework. The first framework does not involve China, while the second does.

For China, the idea of the U.S. and the two Koreas officially ending the Korean War by themselves is intolerable.

North Korea has a slightly different outlook: "China betrayed us long ago, establishing diplomatic ties with our enemies, the U.S. and South Korea. China no longer needs to be involved in declaring an end to a war that dates back 65 years, does it?"

While Trump and Kim are considering a second summit, it is clear that there are many gaps between them.

Kim on Sept. 5 told a special envoy from South Korea that he wants to denuclearize the Korean Peninsula before Trump's first term expires in January 2021, according to the special envoy. 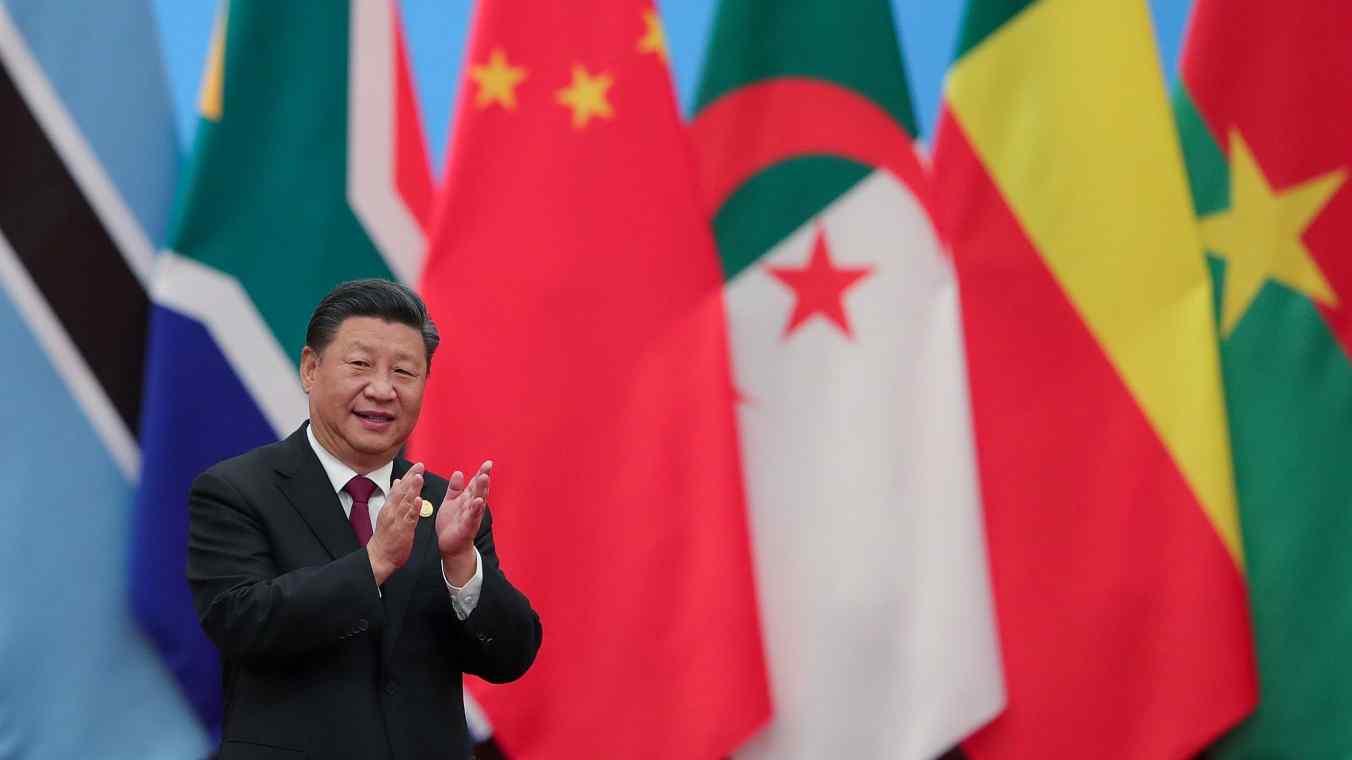 Xi-Putin summit in Vladivostok highlights common front against US

But no specific denuclearization plan exists, and China has no need to be hasty in forwarding its relations with North Korea.

Xi's decision not to visit Pyongyang could have another explanation.

In September 2015, China held its own military parade, in Beijing, to mark the 70th anniversary of its victory in "the world anti-fascist war." It was the first massive military parade that Xi presided over.

Kim did not attend, sending aide Choe Ryong Hae instead. His absence showed a lack of courtesy to Xi, especially considering that then South Korean President Park Geun-hye was on hand.

Park later came under a barrage of attacks from China for allowing the U.S. to deploy an advanced missile defense system called Thaad in South Korea. The deployment was in response to North Korea's nuclear and ballistic missile tests.

China's displeasure also came down hard on South Korean companies, and Lotte, one of South Korea's powerful conglomerates, had to pull out of the huge Chinese market.

Another reason for Xi's decision not to go to Pyongyang could be a tight diplomatic schedule.

Xi hosted a summit of the Forum on China-Africa Cooperation in Beijing on Sept. 3-4. This week, he was in Vladivostok in Russia's Far East, for the Eastern Economic Forum. While there, he held talks with Russian President Vladimir Putin and Japanese Prime Minister Shinzo Abe. 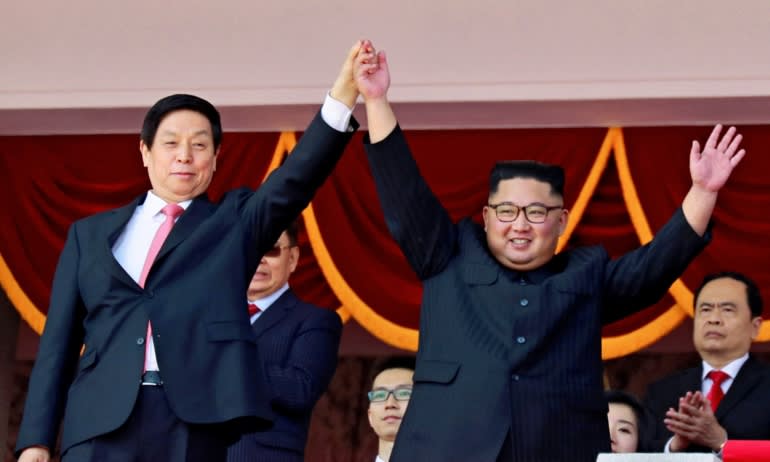 After weeks of debate at various levels, Xi sent Li Zhanshu to Pyongyang. Li also serves as chairman of the Standing Committee of the National People's Congress, China's parliament.

Although Xi decided not to attend, he showed deference to North Korea by tapping Li as his "special representative." Li is a close aide to Xi and ranks third in the party hierarchy, after Xi and Premier Li Keqiang.

During the parade, Kim raised one of Li's hands while the two stood together on the rostrum. By doing so, Kim showed off the traditional friendship between China and North Korea. When Kim and Li later held talks, Li hand-delivered a letter from Xi.

Before the parade, Wang Yang, another Politburo Standing Committee member, visited the North Korean Embassy in Beijing for an event celebrating the 70th anniversary of North Korea's founding.

Wang is No. 4 in the party hierarchy and serves as chairman of the National Committee of the Chinese People's Political Consultative Conference, the country's top political advisory body. But it is difficult to say these courtesies helped Kim to fully save face.

Ordinary members of the Workers' Party of Korea and other North Koreans likely feel that since Kim has visited China three times this year, it was impolite of Xi not to attend the military parade.

China was not the only party to waver in regard to the parade. North Korea also appeared to be on edge. It canceled a live broadcast of the parade at the last minute. And ballistic missiles were absent.

North Korea did not want to provoke Trump.

In this regard, it had an ally. During its main evening news program on Sunday, state-run China Central Television broadcast footage of Kim raising the hand of Li Zhanshu high in the air while both stood together on a rostrum.

But the fact that Kim and Li had watched the military parade together was missing from the CCTV report. There was also no footage of military vehicles passing in front of the men.

China was more focused on not angering Trump than it was on its friendship with North Korea.

Despite the parade taking place in Pyongyang, it was Trump who was the center of attention.

This shows the Xi-Kim honeymoon to be little more than a facade. Xi has no choice but to always try to gauge Trump's feelings.