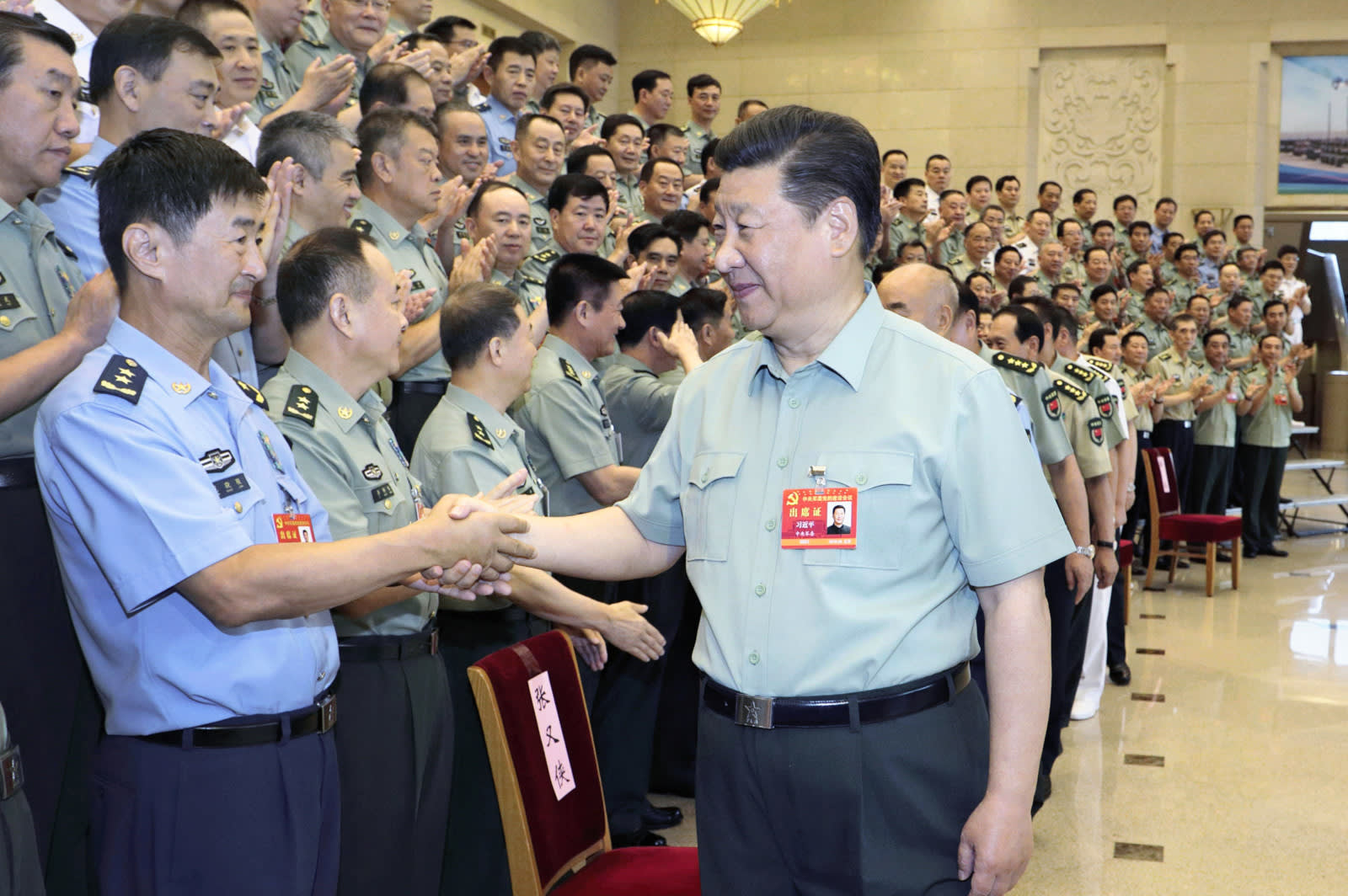 Chinese President Xi Jinping attends a gathering of the People's Liberation Army in Beijing on Aug. 19. Xi's relationship with the military is one of the leader's sources of power.   © Kyodo
China up close

TOKYO -- The unofficial yet highly significant annual summer gathering of past and present Chinese leaders at the beach resort of Beidaihe in Hebei Province has concluded.

While details of the closed-door discussions will not begin trickling out for months, there is much speculation that the conclave was grueling for President Xi Jinping. The trade war with the U.S., the slowdown of the economy and the weakening stock market has left him with much explaining to do.

During the past fortnight, the signals coming out of Beidaihe were highly uncustomary.

On the night of Aug. 16, most likely after the Beidaihe meetings had closed, the top story of state-run China Central Television's news program was about a meeting of the Politburo Standing Committee that had taken place that day.

While the seven-member Standing Committee, the party's top decision-making body, meets on a weekly basis, the gathering is never reported about.

It is the wider Politburo gatherings, held monthly, that make their way onto the news. The Politburo has 25 members, including the seven from the Standing Committee.

CCTV did not broadcast any footage of the Standing Committee meeting. It was an unusual and surprising delivery of news.

The Standing Committee is convened by Xi, who doubles as the party's general secretary. Xi is the chairman, but in principle his vote has the same weight as those of the other members, who make decisions based on majority vote.

Topping the agenda at the Standing Committee's meeting last week was the issue of punishing officials over an illegal vaccine scandal that primarily erupted in northeastern Jilin Province.The scandal has drawn the public's ire as even babies and toddlers were given substandard vaccines.

But the significance of the news report came at the end, when one sentence was read out. "The meeting also researched other items," the script said.

What were the "other items" discussed? Observers have taken it to mean the ongoing Sino-U.S. trade war, the Xi personality cult and party personnel changes.

Chinese bureaucrats often use the word "research." It signals that the debate regarding an issue has not been finalized, and that there is room to maneuver.

That one sentence gave the impression that differences of opinion still exist and that many of the key issues will be carried over to the fourth plenary session of the 19th Central Committee of the Communist Party, which is expected to be held this autumn.

Since taking the country's helm, Xi has rapidly consolidated power. But this year's Beidaihe meeting is believed to have put the brakes on the process, to a certain degree.

This was not the only irregular development during this year's Beidaihe season. The first to break the party propaganda mold was a Xinhua story released on Aug. 8, late at night. It was about Premier Li Keqiang meeting a foreign dignitary "in Beidaihe."

In 2003, partly due to a SARS epidemic that had shaken the nation, Xi's predecessor, Hu Jintao, suspended all official duties in Beidaihe. Leaders did not meet foreign visitors at the seaside retreat, and the unspoken ban had lasted until the Li-Espinosa meeting.

It is rare to see a Chinese president or premier on camera from Beidaihe.

Li's words at the meeting carried meaning as well.

"In the current international situation, we need a world of multilateralism more than ever," he said. "All countries should protect the rules-based international order, abide by the purpose and principles of the U.N. charter, and persist in resolving differences through dialogue and consultation."

Li's words symbolize just how much China's stance toward these issues has changed. Concepts such as "the free trade system" and "multilateralism" have made China wary. Beijing has always linked these ideas to Western liberalism.

In the past, China feared that if it were to lower its guard, it could fall victim to heping yanbian, peaceful evolution, a plot by the U.S. and other countries to topple the Chinese Communist Party's authoritarian rule through peaceful means, in the name of "promoting the free trade system."

Li's unusual public appearance -- and his repeated references to the free trade system -- in Beidaihe suggests Chinese leaders, struggling with the impact of the Sino-U. S. trade war, had put their heads together on how to deal with U.S. President Donald Trump.

The fact that it was Li, not the hard-nosed Xi, who preaches a "great power" foreign policy, that came into the spotlight, was seen to be a message to Trump: China is open to talks. Indeed, low-level Chinese and U.S. trade negotiators on Wednesday met for the first time since June.

Li's appearance in Beidaihe also implied that China has not yet ditched its traditional diplomatic strategy of tao guang yang hui, conceal ambitions and hide claws, which has been handed down from the era of paramount leader Deng Xiaoping. Li Zhanshu, a key aide to Xi and China's No. 3, was reported to be in Beidaihe this month. (Photo by Akira Kodaka)

In another unusual move, Li Zhanshu demonstrated his presence in Beidaihe. No. 3 in the party's hierarchy, he also serves as chairman of the Standing Committee of the National People's Congress, China's parliament.

On Aug. 13, Li Zhanshu used the parliament's website to disclose that he had been in Beidaihe on Aug. 10, though Xinhua and other state-run media outlets kept mum on his attendance at the conclave.

A series of official media reports by Aug. 8 had confirmed that Chen Xi and Hu Chunhua as well as Li Keqiang were at the summer retreat. Chen and Hu are Politburo members. Chen heads the party's Organization Department, and Hu serves as the nation's vice premier.

Chen and Hu met with science and other experts vacationing in Beidaihe, Xinhua said, and acknowledged their contributions to China.

Meanwhile, Wang Huning did not show up to this year's meeting with experts. Wang is currently No. 5 in the party hierarchy and serves as a Politburo Standing Committee member in charge of propaganda and ideology.

Wang's absence marked a stark contrast with the behavior of his predecessor, Politburo Standing Committee member Liu Yunshan, who had shown up to acknowledge the experts every summer until last year.

Wang's absence was seen as being related to the controversial signs of a personality cult building up around Xi. Wang was central to this movement and is now taking the blame for it. 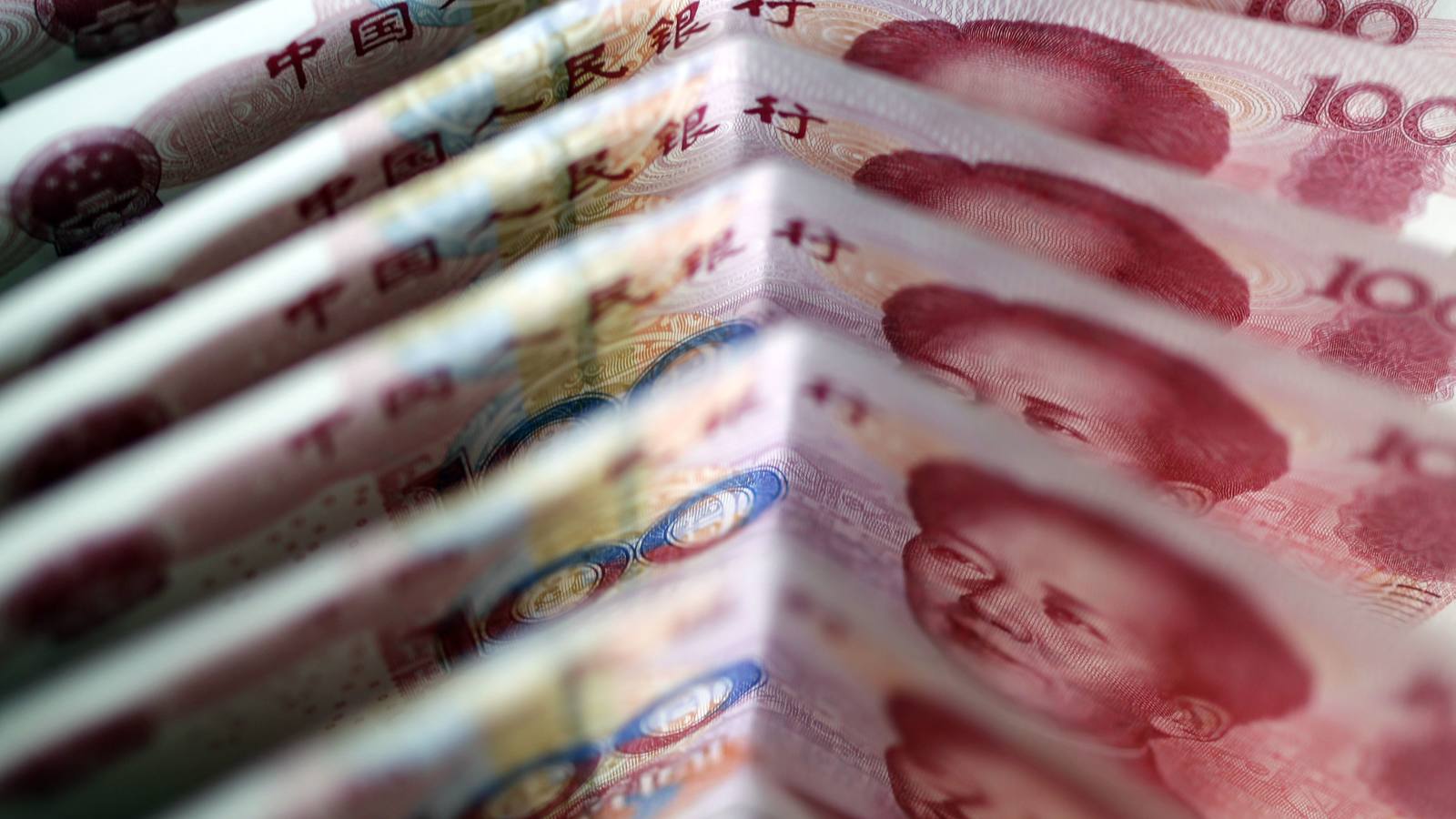 While Li Keqiang and Hu Chunhua both stood out by making appearances in Beidaihe, the so-called Xi Jinping faction kept such a low profile that some got the impression it had been driven into a corner.

"To dispel various pieces of speculation, Li Zhanshu, an influential member of the Xi faction, hurriedly demonstrated his presence in Beidaihe to party members," a Chinese source said. Other Chinese sources made the same observation. 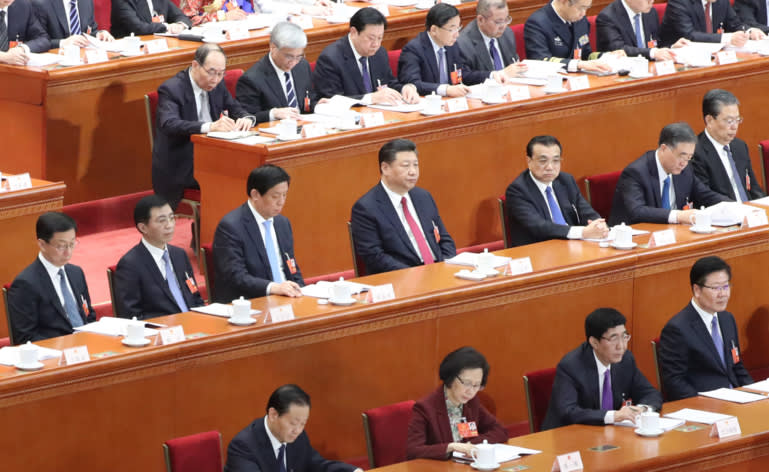 Xi's power play is not over. Although his political momentum lost some steam this month, Xi remains unrivaled.

In March, he was able to revise the nation's constitution, scrapping presidential term limits, Having accomplished this, Xi cannot afford to easily lose the upper hand in political battles.

It was telling that the first footage of Xi aired after the Beidaihe meeting was of him attending a military meeting in Beijing on Sunday. Xi derives his power from his closeness to the military, and the message of the appearance was clear to all.

The fact that so many current leaders had their Beidaihe attendance publicized this summer suggests the revival of old-style intraparty battles and maneuvering.

Is a Pandora's box opening? The answer will begin to emerge this autumn at the fourth plenary session of the 19th Central Committee of the Communist Party, where a fresh round of political infighting will break out.