2022 growth plan, a key to the president's extended rule, fails to take shape

TOKYO -- December has been a bad month for the Chinese economy. Much of Beijing's game plan has not played out well.

The miscalculations perhaps began on the very first day of the month, when President Xi Jinping faced off with his U.S. counterpart, Donald Trump, in Buenos Aires.

For the first 30 minutes of the dinner, basically one man spoke. It was Xi outlining "a package of concessions" to the U.S. According to leaks from the American side, the package includes a massive import expansion plan worth more than $1.2 trillion and various market-opening measures aimed at cutting China's trade surplus with the U.S.

It was a highly unusual way for a Sino-American summit to proceed. Traditionally, the Chinese opt for a bottom-up approach through bureaucrat-led negotiations.

While Xi's presentation symbolized the concentration of power in his hands, it also represented a risk. If the negotiations fail, some fear Xi himself would have to bear responsibility.

These concerns are becoming a reality. China had expected that Xi making a range of concessions in such an unprecedented way would lead to a major breakthrough. That did not happen.

While acknowledging Xi's enthusiasm, Trump chose not to agree to a deal then and there but to punt a decision 90 days down the road. After the summit, China trumpeted what it called an "important consensus" reached between the two sides. But in reality, the three-month delay was about the only element they had agreed to. Xi Jinping's month got off to a poor start when he sat down for a working dinner with Donald Trump after the G-20 summit in Buenos Aires, Argentina, on Dec. 1.   © Reuters

Bewildered by the outcome, China contained any news at home about what U.S. media outlets were reporting as major concessions made by Xi in the bilateral trade war.

Around the same time, it emerged that Meng Wanzhou, Huawei Technologies' chief financial officer and daughter of the Chinese tech giant's founder, Ren Zhengfei, was arrested in Canada at the request of the U.S.

Amid the tense atmosphere, Xi and the Chinese leadership on Dec. 19 convened the annual Central Economic Work Conference, which sets the national agenda for the Chinese economy and its financial and banking sectors for the next year.

An unconventional media strategy on the last day of the forum exposed the leadership's economic concerns. Usually, no announcement is made about the content of the three-day conference, or about the hosting of the event itself, until the evening of the final day.

But on Dec. 21, China's stock markets slumped, with the Shanghai Composite Index slipping below the psychological threshold of 2,500 at one point. Investors were growing increasingly disappointed with the outcome of the Xi-Trump summit.

About 20 minutes before the Chinese stock markets closed, the national government issued a statement that most Chinese investors would soon read on their smartphones.

"We are paying attention to rumors that the Central Economic Work Conference has decided not to cut taxes and reduce various costs. These are not true," the statement said.

It was issued by the Financial Stability and Development Committee that was set up under the State Council, China's cabinet, in 2017. It was soon posted on the website of the People's Bank of China, the nation's central bank. In late November, when this investor was tracking Chinese stock movements at a brokerage house in Beijing, the Shanghai Composite Index was sitting above 2,650. (EPA/Jiji)

The statement succeeded in dispelling a torrent of speculation, and the Shanghai index regained some lost ground to end the day slightly above the 2,500 mark. It was likely issued to prevent the index from hitting a year-to-date low on the day that details about the Central Economic Work Conference were to be announced.

The evening news was to carry an important lecture Xi gave at the conference, leading some observers to believe the statement was a last-minute intervention to save face.

Scars inflicted by the trade war are showing. Eastern parts of the country such as Shanghai and Zhejiang Province, which have been less affected by the country's economic slowdown, are seeing an influx of workers from the traditional industrial zones of Guangdong Province in southern China.

The migrating workers have lost jobs in the south as factory orders shrink. If the key Chinese stock index remains stuck below 2,500, business sentiment will cool further, resulting in an increase in the number of cash-strapped private companies.

Amid the uncertainties, the Xi regime has been unable to convene a more important economic meeting, the fourth plenary session of the 19th Central Committee of the Communist Party.

The targets to be set at the fourth plenary are crucial because they will be the bench marks to evaluate Xi's 10 years in power, when the next national congress is convened in 2022.

The growth target for 2018 has been set at around 6.5%. At the plenary session, Central Committee members will discuss just how much downward revision will be necessary. 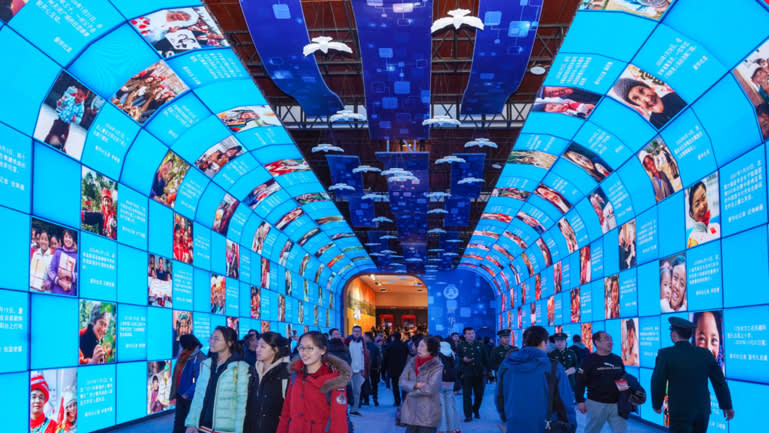 A Beijing exhibition celebrates the 40-year anniversary of China’s “reform and opening-up” policy. Despite the festivities, economic indicators are deteriorating. (Xinhua photo)

How China grows in the coming three to four years will also determine if Beijing can achieve its ambitious goal of overtaking the U.S. as the world's No. 1 economy by 2035.

Reaching milestones along the way will form Xi's report card for his two terms in office. They will, in effect, hold the key to whether Xi can truly remain the top leader beyond 2022.

Xi cannot let down his guard. Even Mao Zedong, Communist China's founding father and a leader thought to have absolute power, had to temporarily step aside to take responsibility for an economy that went into free fall due to the disastrous 1958-1961 Great Leap Forward.

"There is serious debate within the party over issues such as structural reforms, tax, and U.S.-related policies," one veteran party source said. "China might face an even tougher phase next year."

Delaying the plenary session was a difficult decision to make. But Xi needs to be cautious of the forces within the party that are unhappy with how he has managed to concentrate power.

Decisions made at plenary sessions have long lasting effects. Xi himself has learned the harsh truth of this from what happened five years ago, shortly after his regime's inauguration.

In the autumn of 2013, the third plenary session of the 18th Central Committee agreed on a communique which was filled with language that suggested China will embark on bold economic liberalization. 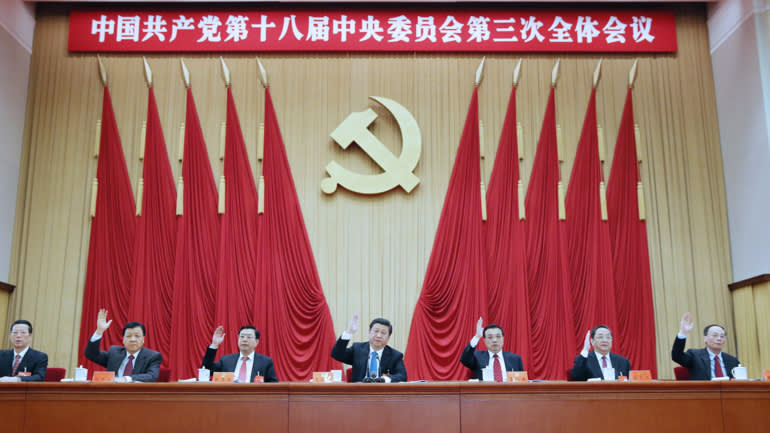 Observers thought that the third plenary session of the 18th Central Committee adopted a bold policy of economic liberalization back in the fall of 2013. But instead China set off on a different course.   © Kyodo

Not only did this aspiration fall by the wayside, China gradually backpedaled.

Xi's focus was on fighting corruption. He spent his time and energy on driving out his political foes. In terms of economic policy, Xi moved toward placing companies under strengthened party control, rather than give them more freedom.

The path China has chosen to take over the past five years is what led it to today's deteriorating relations with the U.S.

In March, Xi showed his determination to continue down this road, pushing through a revision to the national constitution allowing China's president to serve more than two five-year terms. Despite having collected formidable political power, Xi has not been able to lead the economy in the way he desires.

Next year, China will celebrate the 70th anniversary of the founding of a "new China" -- the People's Republic of China. A commemorative ceremony and military parade will be held in Beijing on Oct. 1, events upon which Xi will stake his prestige. As the festivities approach, however, the economy remains a hurdle.

Sooner or later that fourth plenary session of the 19th Central Committee will have to be held, and those medium- and long-term economic policies will have to be adopted. Only they might end up testing Xi's political fortunes rather than mark his achievements.