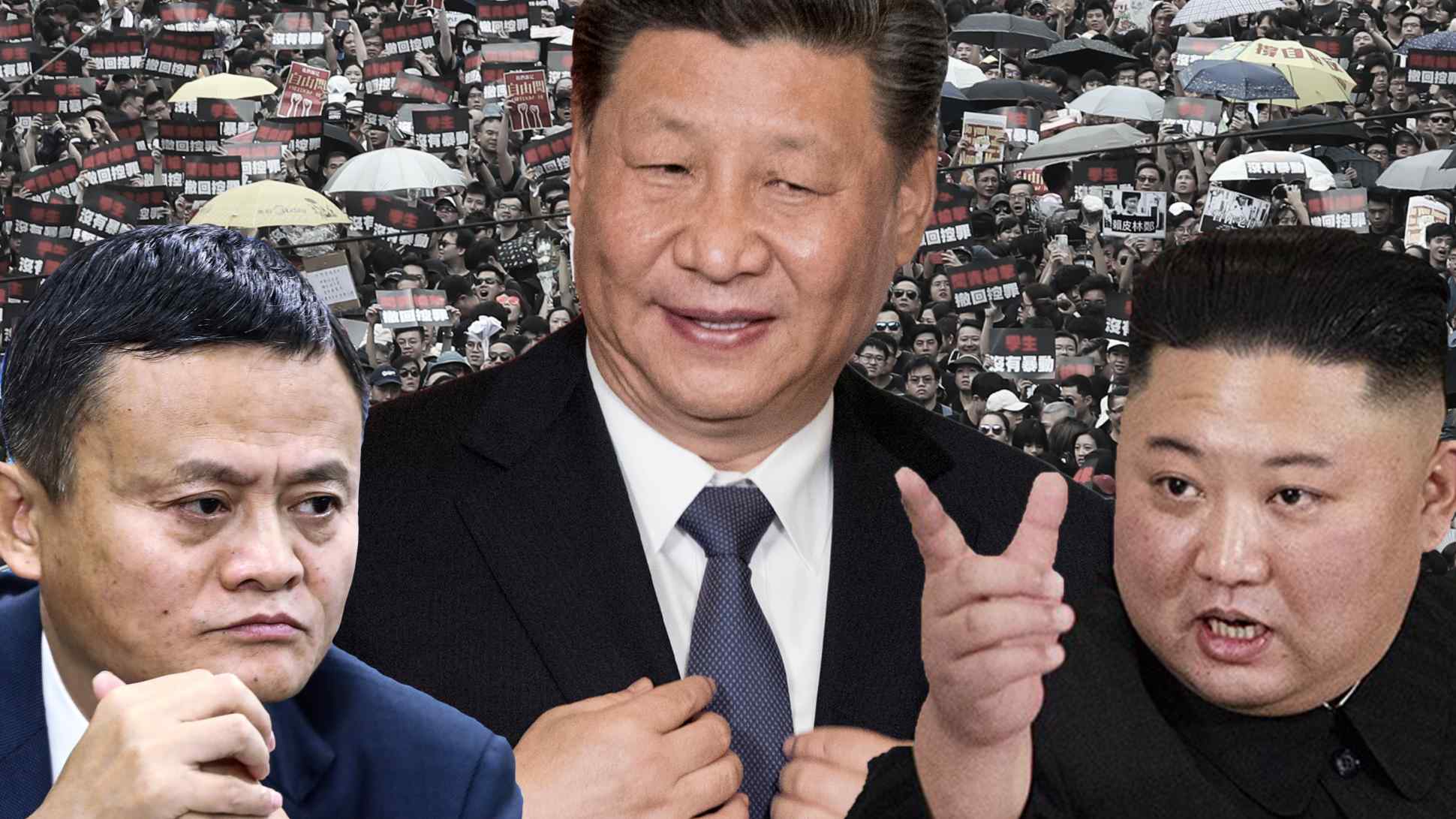 Chinese President Xi Jinping, center, has had to adjust his Shanghai-first economic policy amid the U.S.-China trade war. (Photo sources by Getty images and Reuters)
China up close

It was, in effect, the first major concession the leadership under Xi has had to make since coming to power six years ago.

But Xi and his team were not deeply reluctant to make the decision, said a source tuned in to Zhongnanhai, the leadership compound in Beijing. "The foreign media has it wrong," the source said. "The leadership looked at the domestic economy, international circumstances, and decided to step back a little bit. That's all."

The decisive factor, the source continued, was that Hong Kong's importance to China as a window to international capital has recently increased. "Shanghai is not yet ready to take over Hong Kong's role" in this regard, the source said.

To understand the dynamics, one has to go back to Xi's basic economic plan.

The overarching goal is the "basic realization of modernization" by 2035, which in the common tongue means to catch up with and overtake the U.S. economically. To achieve this goal, Xi's long-term strategy is to divide the vast country into three large areas, each of which can power their own smooth growth over the next 15-odd years. Protesters attend a demonstration demanding Hong Kong's leaders to step down and withdraw the extradition bill, in Hong Kong, China on June 16. (Photo by Kosaku Mimura)

The three areas are:

-- Guangdong Province, Hong Kong and Macao, whose economies are to be integrated.

-- Greater Shanghai, which also encompasses the two neighboring provinces of Zhejiang and Jiangsu.

-- A new metropolitan expanse covering Beijing, Tianjin and Hebei Province's Xiong'an area, which is to be newly developed.

Of these three areas, the one Xi has positioned to lead the overall Chinese economy is Greater Shanghai, a place dear to the president's heart. Before assuming China's top post, Xi served as Chinese Communist Party secretary of Shanghai. Before that he served in the same capacity for neighboring Zhejiang Province.

Indeed many of Xi's close associates from his days in Zhejiang have risen to powerful government positions. Li Qiang, Shanghai's current top official, and possibly China's next premier, is one of them.

The fact that the main growth engine in Xi's blueprint is Shanghai and not the traditional Guangdong-Hong Kong-Macao powerhouse, the vanguard of China's "reform and opening-up" policy, speaks volumes.

Hong Kong has enjoyed privileges from the "one country, two systems" formula, which ostensibly guarantees the city a high degree of autonomy for another 28 years. But under Xi, the former British colony was left with the short end of the stick.

Part of the reason Xi moved away from Hong Kong and put his chips on Shanghai was the difficulty of controlling the territory. Since the Umbrella Movement brought Hong Kong to a standstill five years ago, Xi has sidelined the city and taken a hard line on public opinion there.

But the U.S.-China trade war has disrupted these plans.

Chinese companies that have sought to make inroads into the American market and list their stocks there are being forced to switch to floating and fundraising in nearby Hong Kong instead.

For Greater Shanghai and companies like Alibaba Group Holding that are based there, the U.S.-China trade war has been especially harsh. Alibaba, China's biggest online retailer, is headquartered in Zhejiang, the cradle of China's private sector.

Alibaba's recent decision to list its shares on the Hong Kong Stock Exchange (it is already listed in New York), is an insurance policy to defend against American pressure.

Alibaba Chairman Jack Ma is a member of the Chinese Communist Party. On Sunday, when an estimated 2 million people took to the streets of Hong Kong to protest the extradition bill, Ma dared to meet with an official in charge of the division supervising state-owned Chinese companies.

On Tuesday, the U.S. and China announced that the countries' leaders will meet on the sidelines of the Group of 20 summit in the western Japanese city of Osaka at the end of this month.

Even if this meeting takes place, Xi cannot accept the bulk of U.S. trade demands due to domestic politics.

With the trade talks likely going nowhere, it is becoming imperative to dig in for the long fight ahead.

In this regard, Hong Kong is an important chess piece. Maintaining the prosperity of a city widely trusted by the free economies of the world is vital. If the U.S. were to withdraw special privileges it affords to Hong Kong in terms of travel and trade, China would lose a safety valve; the impact would be immeasurable.

When the West hit China with economic sanctions following the Tiananmen Square crackdown of 1989, Hong Kong under British rule gave Beijing a window to international capital and supported the Chinese economy behind the scenes.

This time, China moved quickly over the unrest in Hong Kong. With Xi on an overseas visit, it was Vice Premier Han Zheng who issued instructions on the front line. Han concurrently serves as a Politburo Standing Committee member in charge of integrating the economies of Guangdong, Hong Kong and Macao. When the Hong Kong government announced a tentative postponement of deliberations on the proposed extradition bill, China made sure that the people of Hong Kong and the international community got the message: "The extradition bill was not a step directed by China."

With that, Lam, who had moved with the strong backing of Beijing, had the ladder pulled out from under her and was forced to apologize to Hong Kong citizens.

Lam herself was careless regarding the timeline for deliberations. She had initially sought to put the bill to a vote around June 27, the very day of Xi's anticipated arrival in Japan for the G-20 summit in Osaka.

That meant voting would have taken place during Xi's stay in Japan. This was a risk. Any mass protest by Hong Kongers would come during the G-20 summit, gain the global spotlight and put Xi under harsh scrutiny from the international community.

There was one more reason why China moved earlier than expected over the unrest in Hong Kong.

All along, Xi had been secretly planning to make an official visit to North Korea for talks with Kim Jong Un, chairman of the Workers' Party of Korea. The trip, abruptly announced on Monday, was strategically timed. 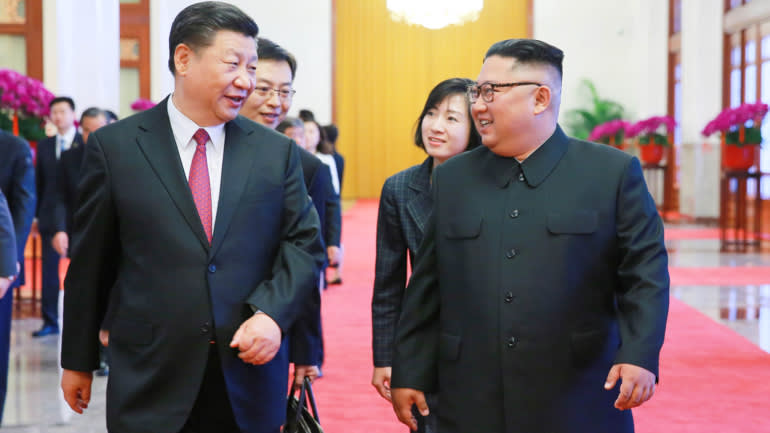 Xi is to arrive in North Korea today, becoming the first top Chinese leader to visit the country in 14 years.

If all goes well, Xi could emerge with a diplomatic card to play when he meets Trump on the sidelines of the upcoming G-20 summit.

What will Xi and Kim talk about? Donald Trump. Talks between Washington and Pyongyang regarding North Korea's nuclear weapons and related programs have stalled. If Xi can help put them back in motion, he would have that card to play in Osaka.

But if more demonstrations break out, if footage of protesters being suppressed in Hong Kong goes viral, China would suffer diplomatically.

Hong Kong authorities, suddenly mindful of the G-20 summit, brought forward the target date for a vote on the extradition bill by one week, to June 20. But this made matters worse, putting events in Hong Kong in headlines around the world right before Xi and Kim had planned on dominating the global news cycle.

The demonstration by an estimated 2 million protesters on Sunday was extremely peaceful, with many calling for Lam's resignation as well as the complete withdrawal of the extradition bill. These demands are difficult for both the Hong Kong government and Beijing to accept. Still, Lam's resignation and the bill's withdrawal cannot be ruled out.