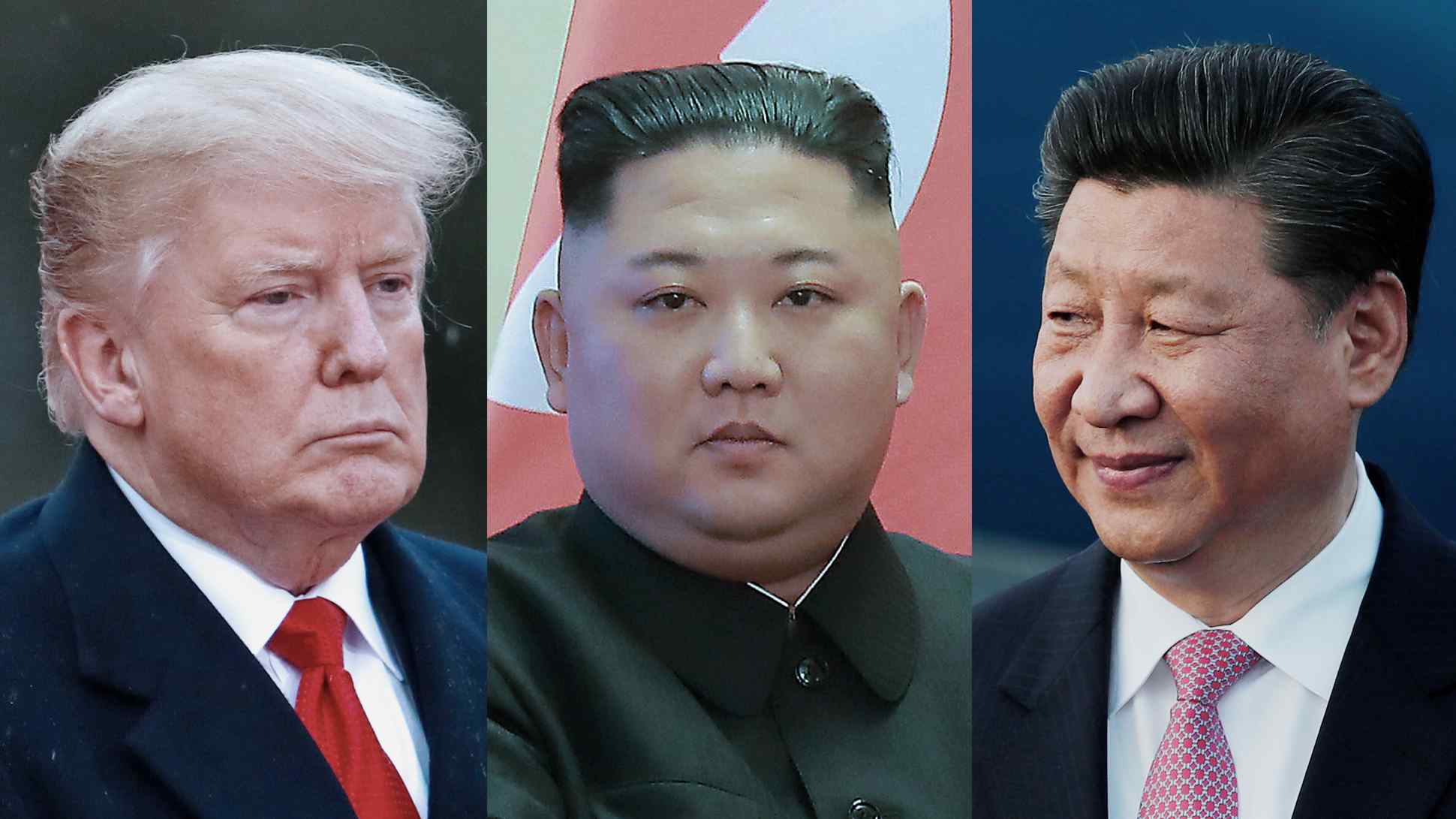 North Korean leader Kim Jong Un, center, is emerging as a key player in the battle for hegemony between the U.S. and China. (Nikkei montage/KCNA/Reuters)
China up close

TOKYO -- At the end of this month, two high-profile diplomatic meetings will probably be held at picturesque resorts on the shores of the South China Sea: the U.S.-North Korea and the U.S.-China presidential summits.

Three major issues will be discussed, all closely related -- North Korea's denuclearization, a formal end to the 1950-1953 Korean War, and the U.S.-China trade war.

Chinese President Xi Jinping and his U.S. counterpart Donald Trump have big stakes in all three issues. North Korean leader Kim Jong Un is not directly involved in the trade war, but the leader of the reclusive state has emerged as an important figure in what is expected to be a long-running historical drama: the Sino-U.S. battle for hegemony.

As things stand, Xi's side appears to be making concessions to Trump -- announcing increased purchases of American goods and hinting at some structural reforms -- in a bid to stabilize bilateral economic relations. China's economic slowdown has made it difficult for Xi to take a combative stance.

But things are not that simple. What is also happening is that China is playing the "North Korea card" and shrewdly weighing in on the second U.S.-North Korean summit, as a way to gain leverage in the trade talks with Washington.

The first step was to invite Kim to Beijing in early January for what was his fourth trip to China. Exactly what was discussed between Xi and Kim remains shrouded in mystery. 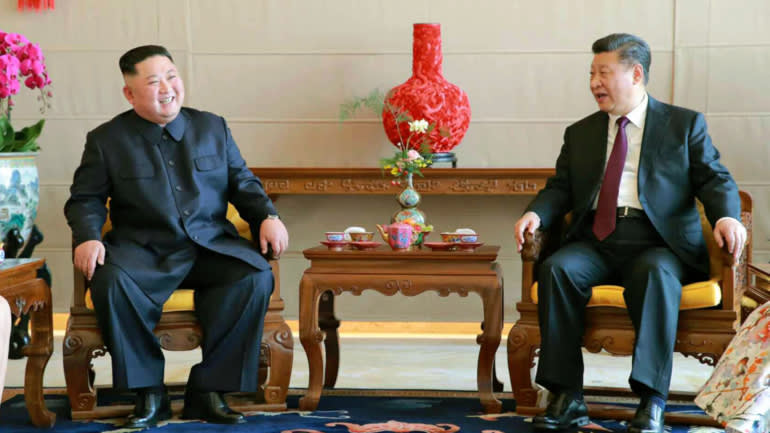 The second step came in late January, when Chinese Vice Premier Liu He met Trump at the White House. Liu, a close aide to Xi, proposed resolving the trade impasse with a face-to-face meeting between the U.S. and Chinese leaders.

China's strategy was clear from the composition of the delegation that accompanied Liu on his trip to Washington. Although labeled as "ministerial-level talks," Liu took no cabinet members with him. The only other high-profile figure on the delegation was Yi Gang, the governor of the People's Bank of China, the country's central bank.

The unequal and bizarre lineup of the Chinese side said it all. The main purpose of Liu's U.S. trip was to meet Trump and personally convey in polite terms Xi's request for a summit.

China knew that if it could arrange a meeting with Trump before the March 1 trade negotiation deadline, it could finalize the details of a possible deal in the days after this week's Chinese New Year holiday.

This is where the North Korea issue comes into play. A source involved in Sino-North Korean relations says the really big issue between the U.S. and China is not trade, but national security.

A second source commented: "China is seeing the benefits of inviting Kim Jong Un to Beijing. For a year now, China has feared being sidelined on the Korean Peninsula. China thinks that risk must be buried." Trump's upcoming visit to Asia for his meeting with Kim provides China with a golden opportunity. To hitch its plans to this trip, China needed to create an atmosphere of progress in the trade talks and stir Trump's interest.

As part of these efforts, Liu told Trump that China would be purchasing five million tonnes of American soybeans. China quickly followed up on that pledge with action.

"I'll be meeting with President Xi, maybe once and maybe twice," Trump told reporters during the Liu meeting in the Oval Office. Liu's mission had been accomplished.

Where will the Sino-U.S. summit be held? China has proposed Hainan Island in the south of the country. Holding the event on its own territory will be advantageous and easier to control for China.

Hainan is a scenic resort facing the South China Sea, much like Vietnam's Danang, the likely venue of the second U.S.-North Korean summit. Trump would have only to take a short flight across the sea between the two meeting places. Kim Jong Un arrives in Singapore on a Chinese aircraft ahead of his first summit with U.S. President Donald Trump on June 10, 2018. (KCNA/Kyodo)

When it comes to intelligence-gathering ahead of the Trump-Kim summit, China has a powerful tool to provide invaluable information. As it did for the U.S.-North Korea summit in Singapore last June, China will probably provide Kim with a plane to fly him and his delegation to the destination.

Kim's own Ilyushin official aircraft is old and will not be large enough to transport a sizable number of North Korean delegation members as well as Kim's personal car. North Korea will require assistance from either China, Vietnam or the U.S.

China's planning for this round of diplomacy began with the understanding that the security environment in Northeast Asia, especially on the Korean Peninsula, has changed dramatically in the past year.

Under Kim, North Korea has proceeded to hold direct negotiations with the U.S. with the aim of normalizing diplomatic ties.

It was South Korea that helped bring North Korea to the table. China was slow to the game and risked being left out in the cold and possibly having its interests on the Korean Peninsula ignored.

At one point, it appeared that North Korea was aiming to bring a formal end to the Korean War without China being involved. If Pyongyang could make effective use of South Korea, it did not need China, or so it seemed.

But the U.S.-North Korean negotiations over denuclearization have stalled and Beijing has leapt at the opportunity to elbow itself back into the picture.

The 1953 Korean War armistice agreement had three signatories: the U.N. forces -- which in effect meant the U.S. military --, the North Korean military and the Chinese military.

South Korea, saying it was dissatisfied with the terms, refused to sign. Therefore, under international law, South Korea is not a party to the pact.

In that war, China sent so-called "volunteer soldiers" to fight alongside North Korea and lost many lives. It cannot tolerate being excluded from the moves to bring a formal end to the war.

For North Korea, the fact that the Trump administration was offering nothing in the nuclear talks made it nervous. It had no choice but to bluff, relying on China as its backer, and China took full advantage of this.

On the second day of Kim's trip to Beijing, Xi and the North Korean leader held talks at the Beijing Hotel. Across the Chang'an Avenue the same day, Sino-U.S. trade talks were held at the Ministry of Commerce building. This symbolized the way in which the two topics are closely linked.

China now has another excellent opportunity.

Danang, the likely venue of the second U.S.-North Korean summit, has particular significance for both Vietnam and the U.S.

During the long and painful Vietnam War, U.S. troops landed on Danang and built the biggest American military base there. While Danang today is a luxury resort, remnants of the base can still be seen near the coastline.

In 1995, Vietnam normalized diplomatic ties with its former nemesis, the U.S. Danang, therefore, is a good place for the U.S. and North Korea to bury the hatchet.

For China, however, Vietnam is a tricky neighbor.

Anti-Chinese sentiment is strong among the Vietnamese, following the Sino-Vietnamese War in 1979 that followed the Vietnam War.

Vietnam has instead gradually moved closer to the U.S. and became a U.S. ally, even allowing the U.S. aircraft carrier Carl Vinson to make a port call at Danang in March 2018.

In order to cope with neighboring giant China, Vietnam has no choice but to partner with the U.S., China's rival. This follows the traditional Chinese warfare teaching of befriending a distant state and attacking a neighboring one.

In Danang, there is a place where the feud between Vietnam and China, both ostensibly socialist nations, is visible. A flower bed in a park there is shaped after islands in the South China Sea, asserting Vietnam's territorial claims to the waters Beijing says are its own.

Will China's cunning game plan to gain leverage over the Americans by linking the trade and North Korea summits work? Many uncertainties await and the stakes this time are very high.