Advertised as voluntary, the choreography was hard to miss

TOKYO -- When the gates abruptly opened at the People's Liberation Army barracks in Hong Kong on Nov. 16, and about 100 shaven-headed and powerfully built men sprang out to clean the streets, a senior soldier made sure to tell the media there that it was a spontaneous act.

"We volunteered!" the plain-clothed unit spokesman, believed to be the commander, said. "Stopping violence and ending chaos is our responsibility." He was wearing a blue shirt.

The troops, many wearing matching gray shirts and black shorts, moved quickly to Hong Kong Baptist University, a stronghold of anti-government activities. They did so in a military manner before beginning to remove bricks and other obstacles left on the streets by demonstrators. They were ostensibly helping Hong Kongers clean things up.

But there was nothing spontaneous to what the PLA, the military of the Chinese Communist Party, did that day.

Among the servicemen, brooms and buckets in hand, were some members clad in sleeveless sports uniforms, in eye-catching blue or orange.

Emblazoned on the back of the uniforms were the words "Xuefeng Special Operations Brigade," or "Special Forces, Eighth Company."

In a secretive military where unit assignments are hardly ever made public, it was a daring move to so blatantly flaunt associations in front of TV cameras. Among the servicemen were some members in sleeveless sports uniforms, in eye-catching blue or orange. They were from the elite "Xuefeng Special Operations Brigade" and "Special Forces, Eighth Company."  (Photo by HKFP/AFP/Jiji)

The "Xuefeng" special forces are an elite unit of the 76th Group Army, which belongs to the Western Theater Command and boasts a glorious 81-year history, Chinese media reported.

The Xuefeng special forces' biggest mission is to spy on terrorists, take them out and quickly wipe out their strongholds. Now the world knows these troops are in Hong Kong.

And the "we volunteered" soldier gave away that the whole event was staged.

"Stopping violence and ending chaos," were the exact words used by Chinese President Xi Jinping in Brazil on Nov. 14 when referring to the Hong Kong Special Administrative Region.

Speaking during a summit of leaders from the BRICS countries -- Brazil, Russia, India, China and South Africa -- Xi demonstrated to the world his support for the Hong Kong government and police.

The university, which is supposed to have autonomy under the premise of academic freedom, turned into a battlefield.

Xi also called for ending violence and chaos and for restoring order when he met with Hong Kong Chief Executive Carrie Lam in Shanghai on Nov. 4. It was a strict order to the top Hong Kong official, following decisions made in October at the fourth plenary session of the Communist Party's 19th Central Committee. Although this is a point that is likely to be overlooked, a communique issued after the fourth plenary devoted a considerable amount of text to the building of the PLA under the party's "absolute leadership."

The communique stresses that the chairman of the Military Commission, currently Xi, has "unified leadership and command" of the military, and vows to "implement the party's absolute leadership over the people's army in all fields of army building."

It would be highly unusual if the military, operating in a politically sensitive area such as Hong Kong, did not report to the party's Central Committee and the military commission, and did not receive the green light in advance.

Given that the apparent military commander used the same phrase as Xi in front of Hong Kong Baptist University, it is clear that his troops' "volunteer" activities were actually in accordance with instructions from the Central Committee and Xi.

The whole cleanup spectacle, therefore, was likely aimed at achieving the upper hand in the war of public opinion.

The volunteer operations in front of Hong Kong Baptist University sent contradictory messages, one of appeasement and one of menace.

Watching campuses devolve into battlegrounds, especially due to the liberal firing of tear gas, Hong Kong citizens in their 40s and older cannot help but recall the 1989 crackdown on pro-democracy protests at Beijing's Tiananmen Square. The indiscriminate shooting of student protesters by the Chinese military remains vivid in their minds.

One aim of the PLA's volunteer mission was to dispel the image of the Chinese military as chilling and intimidating. And next to Hong Kong police in full riot gear, the gentle faces of men in T-shirts and gym shorts pushing brooms came off as good-neighborly.

The volunteer cleanup was also probably meant to give a sense of security to Hong Kong's pro-China forces, who have been suffering from a sense of isolation over the past five months, by demonstrating the presence of reinforcements. A fire is seen at Hong Kong Polytechnic University during an anti-government protest on Nov. 18.   © Reuters

In addition, there are legal questions about the PLA's volunteer street duty. The Hong Kong government had given no prior explanation about it.

Unless they are requested to do so by the Hong Kong government, the troops cannot move for the purpose of maintaining social order or engage in disaster relief operations.

When Hong Kong was hit by a powerful typhoon last year, PLA soldiers set a precedent by engaging in volunteer activities without a request from the local government. But this is an altogether different situation.

The act of removing bricks and other obstacles abandoned by fleeing demonstrators can be said to be politically tinged interference in the local affairs of Hong Kong.

If PLA troops stationed in Hong Kong were indeed going to "stop violence and end chaos," they would need to wait for a request from the local government.

On Nov. 16, the day of the street-sweeping operation, 24 pro-democracy lawmakers immediately issued a statement criticizing the deployment as a violation of Hong Kong's Basic Law and the law concerning the stationing of military forces in the city.

In Hong Kong, a fierce war to sway public opinion is being waged by pro-government forces and the pro-demonstrator camp, each side fighting to win over the wait-and-see moderates.

The situation is under intense international scrutiny, partly thanks to the ubiquity of smartphones. As such, it has been extremely difficult to insert China's military or armed police into the fray. 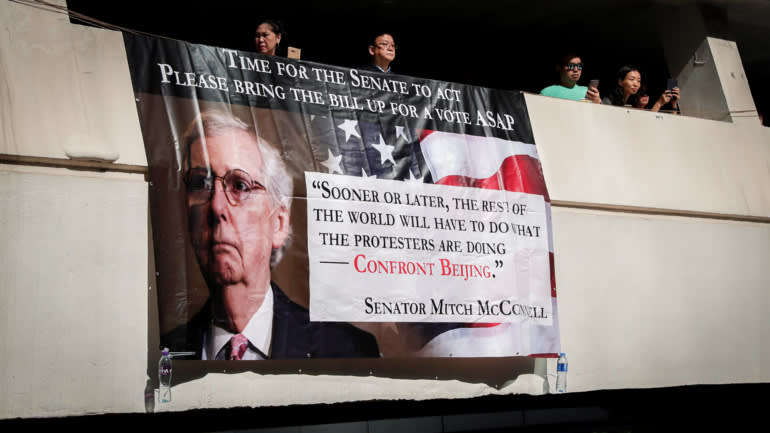 In other recent events, Hong Kong's High Court on Monday ruled that a ban on face masks is unconstitutional, and police tentatively suspended their enforcement of the ban, sending shock waves across the city.

Lam had earlier invoked the Emergency Regulations Ordinance, which allows her to bypass Hong Kong's parliament and invoke bans and other measures. The face mask ban was her first such end-around.

In a surprise ruling, the court decided that the ban violates Hong Kong's Basic Law, which is equivalent to a constitution, on the grounds that it infringes on individuals' basic rights.

The Hong Kong judiciary's move to put the brakes on tough government measures came as police have gone on an unprecedented offensive. It shows that the "one country, two systems" formula is working, at least to a certain degree. It also comes as a blow to Lam's government.

In the U.S., the Senate on Tuesday unanimously passed the Hong Kong Human Rights and Democracy Act.

The battle to sway public opinion is now global, and it rages on.