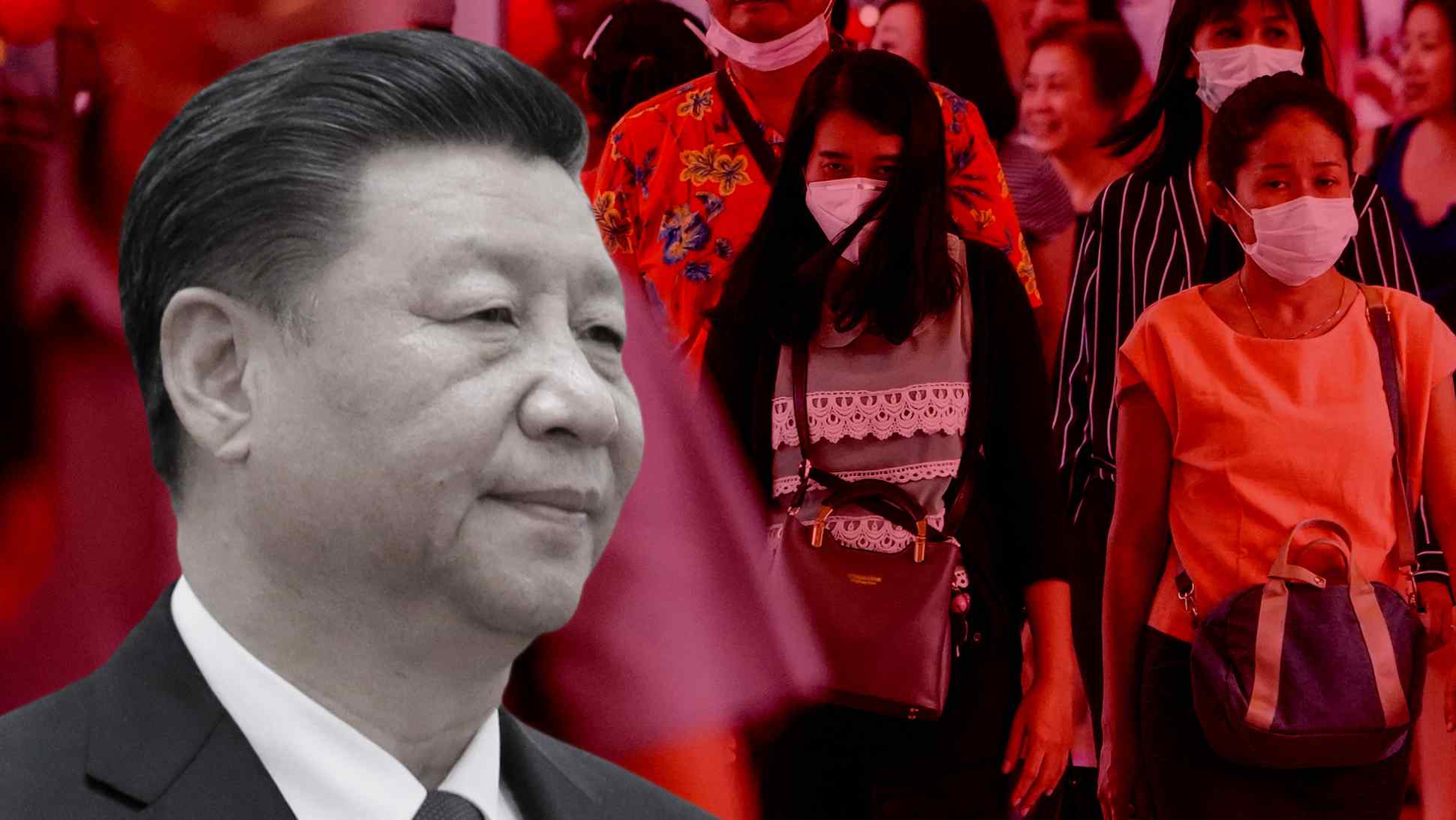 President Xi Jinping has consolidated so much power that China's bureaucracy fears acting without his orders, a situation that initially hampered Beijing's response to the Wuhan pneumonia. (Nikkei montage/Reuters/Akira Kodaka)
China up close

TOKYO -- On Saturday, the first day of the Year of the Rat, Chinese Communist Party General Secretary Xi Jinping, who doubles as the country's president, summoned six other top-level leaders for an emergency meeting.

On what was supposed to be a celebratory day, the seven-member Politburo Standing Committee discussed ways to contain the coronavirus that is causing havoc not only in Wuhan, the central Chinese city where it originated, but also across the country and in various parts of the world.

Politburo meetings are usually reported by state-run China Central Television, on its main news program and without any video footage. But in this case, CCTV showed a clip of the top leaders listening carefully to a briefing on the crisis. It even had footage showing Xi himself taking notes on the coronavirus outbreak.

The video was no doubt an effort to convey to the public that the country's top decision makers were working together, sincerely, to combat the deadly disease.

But the most important take-away from the meeting, one that will likely affect China's politics and diplomacy this year, was the lineup of a new "leading small group" set up by the party to cope with the public health crisis. 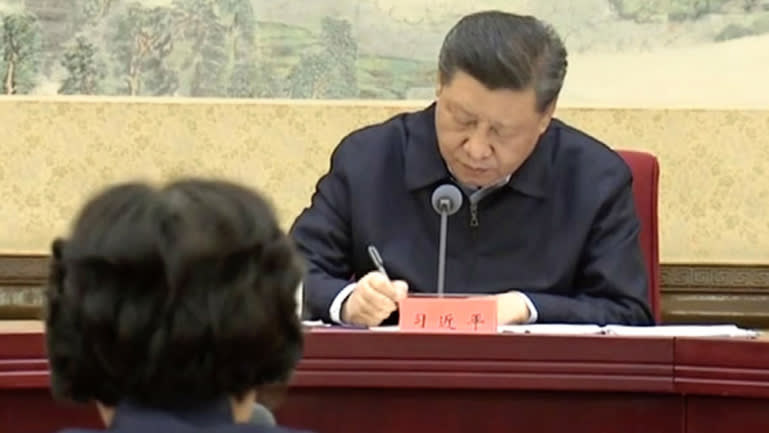 Missing from the member list was Xi. Instead, Premier Li Keqiang was put in charge of the group.

Two days later, the world got to see what this meant politically. On Monday -- still during the New Year holidays -- Li appeared in Wuhan, the capital of Hubei Province and the epicenter of the outbreak.

The official Xinhua News Agency began its report of the inspection with these words: "Entrusted by Xi Jinping, general secretary of the Communist Party of China Central Committee, Premier Li Keqiang on Monday inspected efforts to prevent and control the novel coronavirus outbreak in Wuhan."

The wording suggests that Li was dispatched to Wuhan at the behest of his boss, Xi, the "core" of the party.

While Li has been tasked with spearheading the extremely difficult challenge of containing the coronavirus, the supreme commander in this fight is Xi.

Xi had talked about "strengthening the centralized and unified leadership of the party" to combat the epidemic when the leaders met on New Year's Day. This was his vision in action.

The status of the Chinese premier, who helms the national government, has visibly diminished since Xi entered his second term in October 2017.

The party's long-standing collective leadership system remains in name only, with power concentrated in Xi's hands. 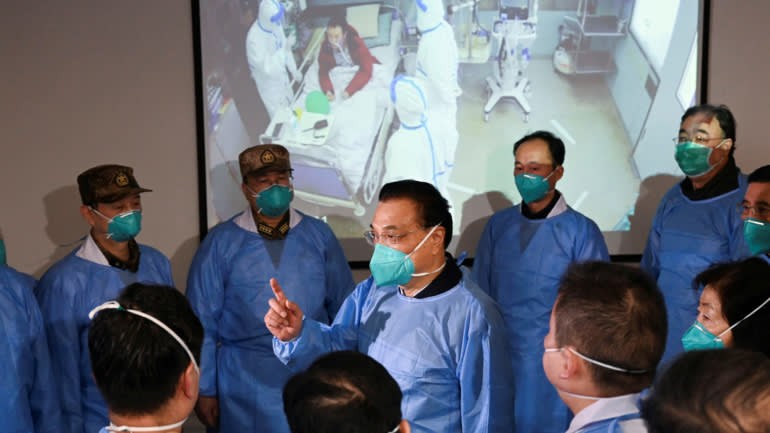 Premier Li Keqiang was entrusted to inspect Jinyintan hospital, in Wuhan, Hubei Province, and its efforts to treat patients who have been infected by the new coronavirus.   © Reuters

The era of seven Politburo Committee members equal in terms of the divided powers of their offices and standing side by side is over. Li ranks second to Xi in the party hierarchy, but it is safe to say he is now under Xi's control.

The new coronavirus, and the leading small group that will tackle it, will affect China's future diplomacy. One of the first countries to feel this will be Japan, which has agreed with China for Xi to visit this spring, around the time the cherry blossoms bloom. That is about two months from now.

China Up Close strongly hopes that China and the rest of the world work together to battle the coronavirus and will be able to declare an end to the crisis within the next two months. But given the developments of the past several days in China, this seems a stretch.

Seventeen years ago, severe acute respiratory syndrome, or SARS, spread like wildfire, primarily in southern China, between November 2002 and July 2003, infecting more than 8,000 people and claiming nearly 800 lives. It took a little more than eight months to be completely brought under control.

At the time, China was led by Hu Jintao, who had become the party's general secretary in the autumn of 2002 and the country's president the following spring. His administration was swamped by the spread of SARS at home, depriving Hu the luxury of focusing on diplomacy.

Hu left Beijing for his first overseas trip in late May 2003, when the worst of the SARS epidemic had passed. He visited Russia, Kazakhstan and Mongolia, before heading to France to attend the Group of Eight leaders meeting as a guest participant.

The Chinese leadership had been nervous ahead of his departure, wanting to avoid a nightmare scenario of its leader carrying the virus into an international summit. Hu, his wife, Liu Yongqing, and his entourage had all underwent chest X-rays and blood tests, nine days ahead of the trip.

Chinese officials also went through guest logs from the preceding two weeks, strictly checking whether Hu or anyone in his retinue had come into contact with people who had come down with SARS or with sick people who were suspected of having contracted the virus. These measures were disclosed at the time by the Chinese Foreign Ministry. 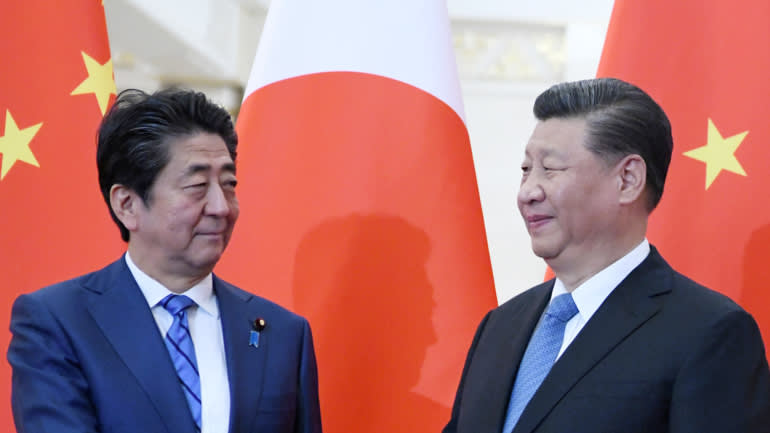 Japanese Prime Minister Shinzo Abe shakes hands with Chinese President Xi Jinping at the Great Hall of the People in Beijing on Dec. 23, 2019.

What is the situation today? On paper, Xi is free to go abroad. With the launch of the leading small group, he can leave the fight against the coronavirus to Premier Li.

But in reality, the Chinese bureaucracy goes into limbo if Xi does not take charge.

In Wuhan, full-scale measures such as shutting down transportation links took effect only after Xi gave orders.

Without Xi's green light, today's Chinese bureaucrats avoid making decisions, fearing blame should things turn sour. That was one reason China was slow to act after the virus began to spread.

Many Chinese officials have started to fret about whether Xi can leave the country while the crisis goes on. First and foremost on their minds is Xi's planned visit to Japan.

The visit is important for China, given the country's rocky relationship with the U.S. This explains why Beijing began preparing for the trip six months before it was tentatively set to take place -- an unusually long lead time.

With the wheels already in motion, the trip cannot easily be delayed.

In Japan, the coronavirus is of immediate concern. According to Chinese media, between 10,000 and 20,000 Chinese are believed to have arrived in Japan on flights from Wuhan in the month leading up to the lockdown.

Japan is the second most popular destination, after Thailand, for Chinese New Year travelers from Greater Wuhan. 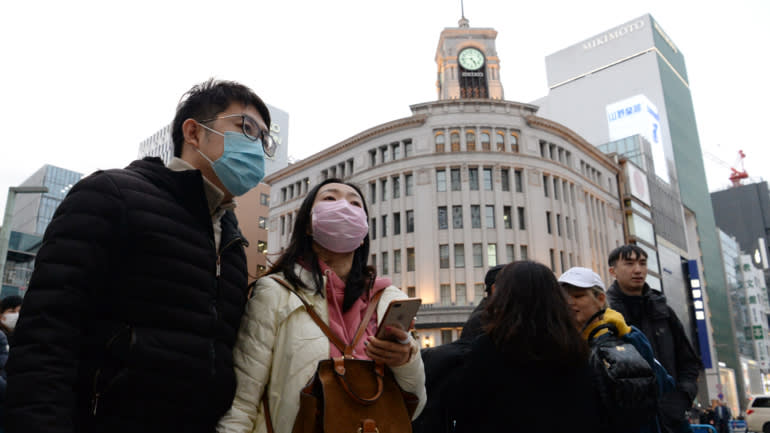 In stark contrast to the SARS epidemic, which was primarily a domestic issue, the recent outbreak has become a global challenge as millions of Chinese now travel the world.

The Japanese government this week chartered a jetliner to evacuate Japanese nationals from Wuhan, which remains under lockdown. But with the coronavirus far from contained, it remains to be seen whether the Japanese would be ready to welcome Xi by April.

If Xi does arrive in Japan this spring, as a state guest as planned, his entourage will count several hundred people, including personnel for security and advance preparations. Xi will visit the Imperial Palace -- where he will have a meeting with Emperor Naruhito and attend a banquet -- and the State Guest House, both in Tokyo. There is also the possibility that Xi will travel to other cities, his large delegation in tow.

The Chinese diplomatic corps, including Xi and his wife, will visit Japan after undergoing strict health checks. If the visit comes before the epidemic is brought under control in Beijing, Japan's crisis management will face a major challenge.

As a neighbor and destination for so many Chinese visitors, it is only natural for Japan to offer its full support to China.