Chinese President Xi Jinping has set 2035 as a target year to catch up with the U.S. economically.   © Reuters
China up close

Talk of becoming world No.1 backfired, hurting even dinner tables

TOKYO -- Soon, all 1.4 billion Chinese will be feeling the pinch of Donald Trump's presidency an ocean away.

They will look at their dining table and notice their favorite dishes -- Chinese-style deep fried chicken, firecracker chicken and twice-cooked pork -- are all cooked with lots of oil, much of which is pressed from the seeds of American or Brazilian soybeans.

Similarly, many of China's pigs and chickens are raised on imported soybean meal, the residue left after oil extraction.

Doubanjiang, the chili-bean paste that determines the splendor of Chinese cuisine, also cannot be made without soybeans. Of the above mentioned dishes, cabbage is about the only ingredient the country can fully provide for itself.

As a result of the soybean levy, the cost of food in China will jump, dealing a serious blow to Chinese farmers and eaters. The dish on the right is called laziji and is popular among ordinary Chinese. But it and other Chinese staples will cost more due to China's retaliatory tariffs on U.S. products. (Photo by Katsuji Nakazawa)

To be sure, discontent might also grow in U.S. agricultural states, where farmers are already having difficulty selling soybeans and other produce to China. Trump could end up losing support from those in the agriculture sector.

The big question is why the game of chicken actually broke out. Xi may have nobody but himself to blame.

Since the days of Deng Xiaoping, China had maintained a less-assertive foreign policy, portraying itself as a "developing country." Deng's guidance was to keep a cool head, hide one's claws, bide time and never try to take the lead.

After coming to power as the Chinese Communist Party's general secretary in the autumn of 2012, Xi ditched that policy and started to talk of the "great rejuvenation of the Chinese nation." He labeled it as the Chinese dream.

At the Chinese Communist Party's once-every-five-years national congress in October, Xi went further, floating for the first time the target year of 2035 as the time China would catch up with the U.S. economically.

In November, He Yiting, the vice president of the Central Party School, gave a speech in Tokyo explaining the meaning of Xi's words. The goal of achieving China's modernization had long been set at the 100th anniversary of the founding of the People's Republic of China's, which falls in 2049. "That goal has now been brought forward by about 15 years," He told Japanese lawmakers at the parliament building in Tokyo's Nagatacho district. He Yiting was unaware of the consequences of President Xi Jinping's stated goals when he explained them to Japanese lawmakers in Tokyo on Nov. 24, 2017.

Around the same time, senior party officials were giving similar explanations about Xi's new policy around the world.

By bringing forward the goal, Xi was telling the world that China will become the world's number one during his lifetime.

Xi, who would be 82 in 2035, assured his stature in March, when he had a clause allowing a president to serve up to two five-year terms removed from the nation's constitution.

Little did he or his team imagine that his words would help to trigger a Sino-U. S. trade war. Instead of hiding his claws, Xi had flashed them. And it had come too early.

By expediting the modernization plan, Beijing would also be accelerating the "Made in China 2025" initiative, a blueprint for turning the country into a high-tech manufacturing powerhouse. The plan has been singled out by the Trump administration as a symbol of China's ambition to gain an advantage in next-generation technology, even if it meant stealing intellectual property.

"Made in China 2025" was compiled three years ago, with Premier Li Keqiang playing a central role. Back then, it was not clear that Xi wanted to bring forward the goal of gaining No. 1 status. It was only after the plan was published, that the new aspiration of catching up and overtaking the U.S. economically by 2035 was added. The step after that would be to outstrip the U.S. both militarily and culturally by 2049.

China has good reason to trumpet its long-term targets at home: It needs to justify the socialist system that it continues to uphold. Although its economy is no longer a purely planned one, China does adopt five-year outlines, and the "Made in China 2025" strategy is closely linked to the current five-year plan.

One notorious plan was the Great Leap Forward of 1958, a high-growth campaign, launched by Mao Zedong but failed miserably. China declared its ambition to catch up with the U.K., then the world's second-largest economy. Chinese Premier Li Keqiang played a central role in compiling the “Made in China 2025” plan.   © Reuters

With Mao leading the country, China significantly boosted steel production. But rural areas were devastated, and more than 20 million people starved to death. Mao eventually resigned as head of state.

Today's China is nothing like the shell it was during Mao's time. The country's economy now plays an integral global role.

China ranges over the global economy like a bull elephant roams the savanna. Other grassland wildlife is sensitive to this mammoth's slightest moves. The ferocious lion, the U.S., is no exception.

China has yet to become fully aware that it is the elephant in the global economy's boardroom.

But in Washington, Trump was cognizant that he could not stand idly by after China vowed to knock the U.S. off its economic pedestal in just 17 years from now. He campaigned for the presidency by promising voters he would put "America first."

News of China's decision to bring forward its modernization target date emerged at a bad time. It came shortly after Xi had promised Trump business deals worth $250 billion. That pledge came in November, when Trump was visiting Beijing, and was portrayed as a salve that would help to heal the U.S.'s massive trade deficit with China. 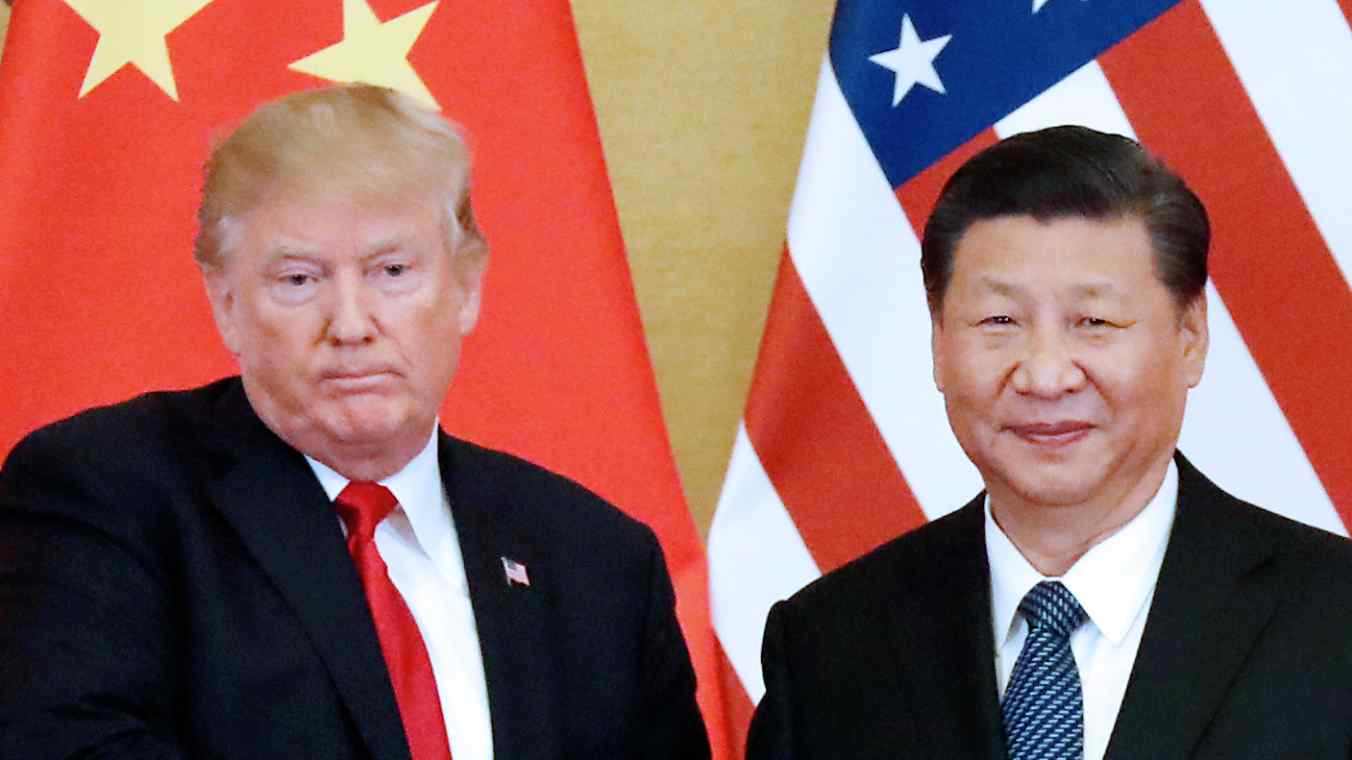 US unveils new tariffs on Chinese imports worth $200bn

As expected, it was little more than talk. The trade gap continues to quickly widen.

Alarmed by China's ambitions and frustrated by the lack of progress in narrowing the U.S. trade deficit, Trump went on the offensive in the spring.

There are good reasons for China coming under U.S. trade fire. It has been the biggest beneficiary of the global trade system since it became a member of the World Trade Organization at the end of 2001.

All the while, it has imposed strict foreign ownership limits in each industrial sector, forced foreign companies that enter China to transfer technologies and has set up various other barriers to its markets.

Backed by huge amounts of government funds, Chinese companies have made splashy acquisitions of U.S. and European companies that own key technologies, especially in the auto and information technology sectors.

Chinese companies can quickly obtain technologies by acquiring or taking equity investments in U.S. and European companies. In the U.S. and Europe, any company can acquire any other company as long as it can obtain the necessary funds.

But it is difficult for U.S. and European companies to acquire Chinese companies. Chinese authorities have numerous regulations at their disposal to block any such attempt. Chinese President Xi Jinping unwittingly laid the groundwork for the trade war that is now taking place between China and the U.S.   © Reuters

When Xi bared China's sharp claws, declaring China would overtake the U.S. economically by 2035, he did so for the benefit of a domestic audience and to aid his fierce power struggle with the political factions that had run China for decades.

China is now beginning to realize the high price it is having to pay for Xi's declaration.

If prices for ingredients in Chinese dishes climb, so too will discontent among Chinese consumers. This could lead to a barrage of attacks against U.S. companies operating in China.

Worried about social instability, the Chinese leadership has been careful not to overplay the trade war in domestic media. In terms of diplomacy, Beijing could go back to hiding its claws again.

But that would only be superficial. At the core, Xi cannot retract a grand target adopted at the Communist Party congress, just as he cannot discard the "Made in China 2025" goal.

In an interconnected world, China's misty domestic politics will continue to influence the global economy for many years to come.