TOKYO -- On Aug. 25, the People's Daily, the mouthpiece of the Chinese Communist Party, ran a splash headline on its front page that caught the eye of China watchers around the world.

"The people's leader loves the people," it said.

The signed opinion piece took note of President Xi Jinping inspecting Gansu Province and described him as a leader who loves the people and is loved by the people.

The timing of the article was significant, coming a little more than 10 days after the end of this year's Beidaihe conclave, the annual summer gathering of incumbent leaders and party elders at the seaside resort town in Hebei Province.

It hinted that Xi had gotten the green light to portray himself as such at this year's Beidaihe conclave. It was Li Zhanshu who began referring to Xi Jinping as "the people's leader" immediately after Xi pushed through a revision to China's constitution in March 2018.   © Reuters

This is not the first time that Xi has toyed with the "people's leader" crown.

In March 2018, Xi muscled through a revision to China's constitution, doing away with presidential term limits and making it possible to remain president for life. His aides then embarked on a campaign to popularize "the people's leader" moniker.

Li Zhanshu, Xi's right-hand man who has known his boss since the 1980s, moved first.

During the closing speech of the annual session of the National People's Congress, China's parliament that he heads, Li praised Xi as "the people's leader" and "the figure who steers the country in a new era."

Toward the summer of 2018, Chinese media outlets began to trumpet the expression "the people's leader, Xi Jinping." A video about "the people's leader who came from the Loess Plateau" was spread widely. These moves were reminiscent of the old campaign to deify Mao.

But a pitfall was lurking. Xi's close aides were too hasty and did not give a detailed explanation to party elders. Their campaign faced fierce resistance from party elders and non-mainstream factions.

They specifically came under fire for allegedly moving to deify Xi and build a new form of personality cult around him. This was the key theme of last year's Beidaihe conclave.

The party's constitution clearly bans "any form of personality cult."

After Mao's death, the party introduced the ban under then supreme leader Deng Xiaoping to prevent a repeat of the disastrous Cultural Revolution.

Even Xi's faction, which was gaining ground following the constitutional revision, was unable to push ahead with moves smacking of a personality cult. Chinese media outlets also stopped trumpeting the expression, "the people's leader, Xi Jinping."

Why the return of the phrase?

The tacit understanding reached at Beidaihe seems to be: China needs a people's leader on a par with Mao to fight the protracted trade war with the U.S. under the unpredictable President Donald Trump and to deal with the Hong Kong situation, which could lead to a crisis for communist rule.

One source said, "For Xi, Trump's endless trade war and the Hong Kong issue have become unexpected gifts from heaven." Said another, "For China to fight a protracted war, it first needs stability and solidarit."

Therefore, the Chinese sources say, what was widely believed to be a double whammy for Xi has turned into a political jackpot. 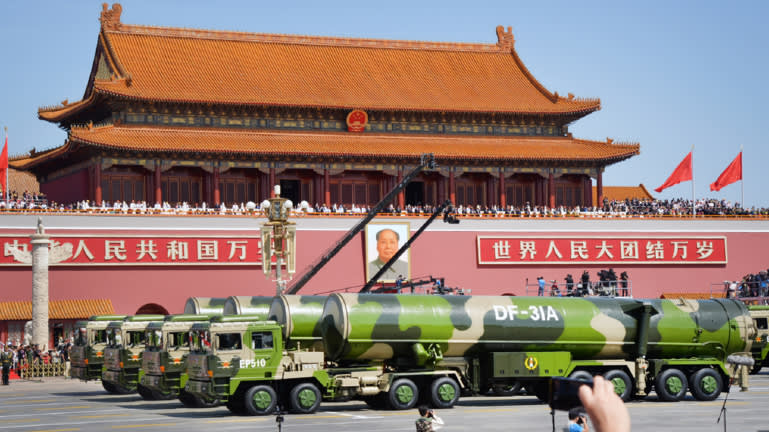 It is customary for Chinese leaders and party elders to gather on the Tiananmen rostrum for military parades, like this one in 2015. (Photo by Takaki Kashiwabara)

Next on the political calendar is a ceremony marking the 70th anniversary of the founding of the People's Republic that will be held in Beijing on Oct. 1.

China must build "a strong military in the new era," Xi said when he inspected an air force base in Gansu. This was a curtain raiser for the massive military parade planned on Oct. 1 to play up national prestige amid the harsh confrontation with the U.S.

During these military extravaganzas, party elders, including former top leaders, will appear on the Tiananmen rostrum along with Xi, as they did for another military parade in 2015.

Ahead of the big parade, it will be natural for party elders to show respect to Xi as he faces up to "a national crisis." It is also customary for the party to project a unified front.

In that sense, the recent political developments in China appear heaven-sent. One interpretation is that last year's constitutional revisions, which were so unpopular among the elders, have now been accepted in name and reality.

Meanwhile, Deng's political legacies are being lost. His personality cult ban, spelled out in the party constitution to prevent a Mao-style dictatorship, remains but is currently being ignored. Deng also limited presidents to two five-year terms by writing a clause into the national constitution.

Deng's edicts helped end the confusion caused by the Cultural Revolution and pave the way for China's high economic growth.

While being responsible for overseeing the 1989 Tiananmen Square crackdown on pro-democracy student protesters, Deng laid the foundation for today's affluent China.

He died in 1997 but designated Jiang and Hu as successive national leaders before passing away. It would be safe to say that the Deng era lasted until Xi stepped into Hu's shoes in 2012.

The political climate Deng established still lingers, though it is at risk of being overtaken.

It is too early to say whether the Aug. 25 People's Daily article, "The people's leader loves the people," was implying a tentative party solidarity meant to cope with a crisis or the advent of a truly stable new Xi era.

Close attention should now be paid to the fourth plenary session of the 19th Central Committee of the Communist Party, which has been delayed for nearly one year.

If there was no wrangling during this summer's Beidaihe conclave, there should be no problem with convening the fourth plenary session to discuss a basic medium- and long-term economic policy.

Many pundits think the fourth plenary session has been delayed due to disagreements within the party.

The session must be held by the end of this year so a basic economic policy can be adopted. This will have a significant impact on trade talks with the Trump administration.

If there is now no risk of Xi being, so to speak, shot from behind, due to his strengthened domestic political standing, his trade team will have some discretion to negotiate with its U.S. counterpart.