Xi Jinping, superimposed in front of the Great Hall of The People, is preparing for a protracted war with the U.S. on trade. (Nikkei Montage / AP and Reuters)
China up close

TOKYO -- This week, China made a volley of bombshell announcements during a four-day span as its trade war with the U.S. escalated.

On Friday night the Chinese Communist Party finally announced its long-delayed fourth plenary session of the Central Committee, a key platform to set the direction for the nation's midterm economic policies. The session will take place in October.

The next day Vice Premier Liu He, a close aide of President Xi Jinping in charge of economic policy, raised eyebrows with a significant policy reversal. Appearing at the State Council's financial stability and development committee, Liu unveiled a host of financial stimulus measures.

Then on Monday night China announced it would file a complaint with the World Trade Organization over the U.S.'s fourth round of punitive import tariffs that took effect the previous day.

The key take-away from the three announcements is that China is preparing for a "protracted war" with the U.S. on trade.

But that is just one aspect of things.

Two researchers familiar with China's economy and politics quickly took note of the adjustments that have been made.

"After returning to Beijing from the annual conclave at the seaside resort of Beidaihe, Xi began to be referred to as 'the people's leader.' Yet, Xi's economic policies are still not set in stone," one researcher said. "Liu He's flip-flop was surprising." 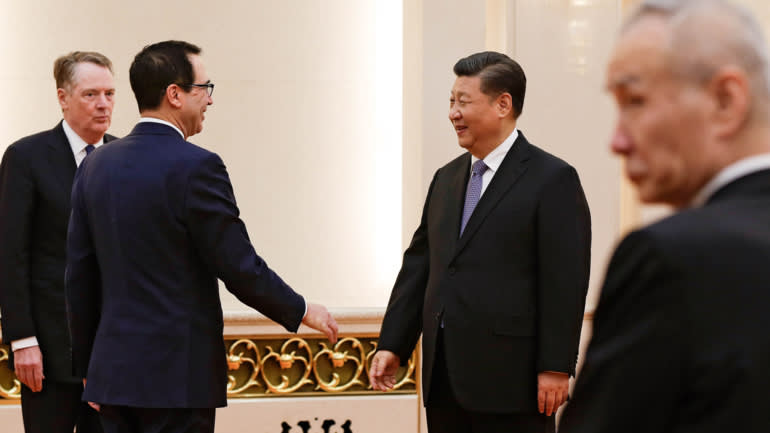 Said the other: "Finally, the crucial fourth plenary session has been set. But why did they not cite economic issues that have drawn global attention as its main theme?" Politics, the source concluded, is difficult.

A major shift is taking place in domestic economic policy. The shift, as always, is tightly connected to Beijing's politics.

In a statement released Friday, the party's Politburo, made up of the top 25 party officials, said it had decided to hold the fourth plenary session in October, to "discuss important issues concerning how to uphold and improve the system of socialism with Chinese characteristics and make progress in modernizing China's system and capacity for governance."

The word "economy" was missing.

Customarily, only one theme is the focus of each plenary session. Clearly, at the upcoming plenary, it will not be the economy.

When the third plenary session ended in February 2018, Chinese media widely reported that the fourth would be an opportunity for China to adopt an extremely important basic economic policy.

It has taken months to prepare for the session. After a significant delay, it is finally set. But the crucial issue -- a basic economic policy -- has been left off the official agenda.

For Liu the economist, this was tantamount to an acknowledgment and self-criticism that the debt reduction measures he spearheaded, which factored into China's significant economic slowdown, were the wrong prescriptions.

When the Politburo met at the end of July, it noted that "downward pressure on the domestic economy is growing." It also expressed a sense of crisis over the deteriorating state of the Chinese economy. The Costco shopping experience can resemble a full-contact sport, as it did on opening day at the company's first China warehouse last week in Shanghai. (AFP/Jiji)

Naturally, Beijing had to come up with some countermeasures as the nation's real economic growth rate declined to 6.2% in the April-June quarter on a year-on-year basis, its slowest pace of growth since quarterly records began.

China's recent growth engine has been consumption. Anecdotal evidence suggests consumers continue to splurge, at least selectively. On Aug. 27, when U.S. discounter Costco opened its first Chinese warehouse, in Shanghai, thousands of shoppers flocked to the outlet, some elbowing one another to get their hands on roast chickens. It turned into chaos, and the store was forced to close early.

To save factory owners, short one-year loans are urgently needed. Liu had no choice but to prepare ample liquidity, quickly.

President Xi and Vice Premier Liu can ill afford to head into the fourth plenary under such a gloomy economic atmosphere. It would lead to party members questioning the country's medium-term and long-term economic policies that the Xi-Liu duo have been leading since 2012.

It would also mean that the arguments made by Premier Li Keqiang and other non-Xi-faction reformists were correct. They have been calling for policies dictated by the real economy from early on.

The two camps' discrepancies surfaced several years ago, when Liu contributed an anonymous article to the People's Daily strongly criticizing the economic policies championed by Li. The article was published on the front page.

As things stand now, however, the premier looks to have the upper hand. Liu is also in charge of trade negotiations with the U.S. If he loses his influence over domestic policies, it would affect the negotiations. 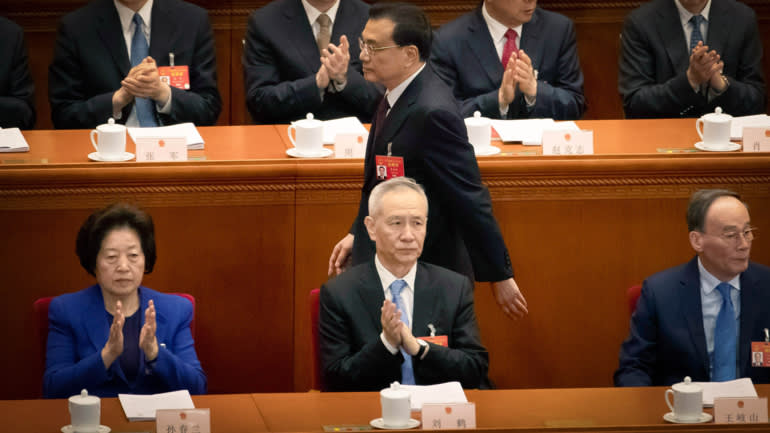 Premier Li Keqiang walks past Liu He at the National People's Congress in Beijing's Great Hall of the People on March 5, 2019. Liu's economic policymaking is beginning to look questionable.   © AP

Xi, the man with the most political power, needs to weather this complicated issue.

If China were to adopt its basic economic policy covering the next three years, the party in effect would not be able to deny or reject the economic policies of the past seven years under Xi's "new era."

This is why Xi had no choice but to exclude the economy from the agenda.

China is now facing a host of tough challenges, especially the crisis in its relations with the U.S. and the unrest in Hong Kong. Also, to fight a protracted trade war, China must strengthen its governance first and confirm the party's internal unity.

The direction is reminiscent of the atmosphere that prevailed at the last fourth plenary session, in 2014, which decided to thoroughly pursue Chinese-style rule of law to aid Xi's fierce anti-corruption campaign.

That will not necessarily be the case. If the situation permits, it will be possible to discuss economic issues, including China's policy on the intensifying trade war with the U.S. The wording of the Politburo statement leaves some room for that.

Improving "socialism with Chinese characteristics" is listed as a central theme. The phrase is extremely vague and can possibly incorporate economic issues.

Ideally, Xi would push forward "socialism with Chinese characteristics," a term coined in the days of Deng Xiaoping, in accordance with today's globalized society and incorporate some of the structural reforms demanded by U.S. President Donald Trump.

Such a move by China should do wonders to stabilize the global economy. But no one should hold their breath.

What then, should people watch for?

If the upcoming fourth plenary avoids setting midterm and long-term economic policies, all eyes will turn to the annual Central Economic Work Conference of the Communist Party, to be held at the end of November or later.

That conference sets the short-term economic policy for the following year.

What messages Liu sends after his recent flip-flop will significantly impact the future of the global economy now reeling from the U.S.-China trade clash.