The U.S. flag has become a symbol of Hong Kong's pro-democracy protests, as it was on Oct. 14 as people demonstrated against the invocation of emergency law.    © Reuters
China up close

At the beginning of this year, Xi told Chinese Communist Party cadres to watch out for "black swans" and "gray rhinos." They have both appeared, simultaneously and in full force. Not in Beijing, but Hong Kong.

The fierceness and durability of protest activities down south may not have been what Xi had assumed. A strongly worded warning that he issued while visiting Nepal this week reflected his sense of crisis and frustration.

"Anyone attempting to split China in any part of the country will end in crushed bodies and shattered bones," Xi said on Sunday, although he did not mention Hong Kong by name.

"A black swan" refers to a serious unforeseen incident that defies conventional wisdom. The term dates back to the end of the 17th century, when black swans were discovered in Australia, sending shock waves through the West as it had long been believed there that black swans did not exist.

"A gray rhino" refers to a potential risk that is highly obvious but ignored. It is quite natural for a rhino to be gray. As long as it is gentle, no need for concern. But once the enormous herbivore goes on a rampage, nobody can bring it under control.

The same day that Xi was talking of shattered bones, demonstrators and police clashed violently in Hong Kong. 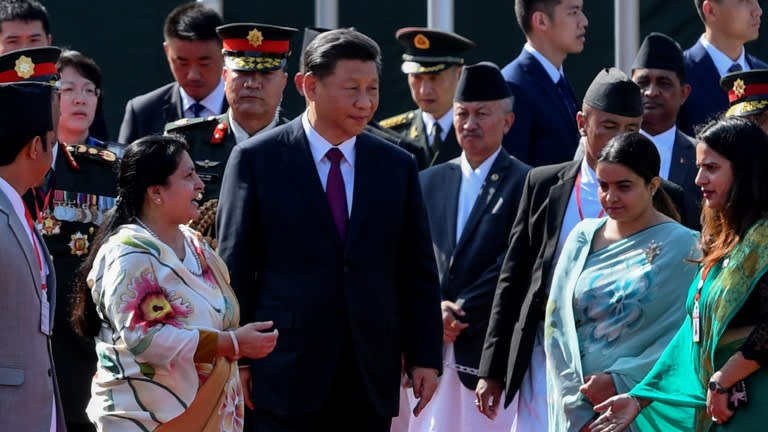 While in Nepal, Chinese President Xi Jinping mentioned "crushed bodies and shattered bones" as consequences facing anyone who challenges Chinese sovereignty. Although Hong Kong protesters are asking for democracy, not independence, Xi was thought to be alluding to them.   © Reuters

The following night, Monday, a massive rally was held there to call for the U.S. Congress to swiftly pass the Hong Kong Human Rights and Democracy Act, a bill that would put pressure on China.

Despite it being a weekday, tens of thousands of demonstrators filled Central, with the Stars and Stripes flying.

The black swans and gray rhinos that have appeared together in Hong Kong are proving to be a handful for the Hong Kong government and Beijing.

The swans wear black masks, headgear, shirts and sneakers. They include many young women; all are ordinary people. They also form the main faction of peaceful demonstrators who fill streets and chant the slogan, "Hong Kongers, resist."

During intermittent rallies at commercial facilities in residential areas, they also do not forget to observe a minute's silence for fellow protesters who took their own lives due to their grief over Hong Kong's current travails.

There are not many images of peaceful rallies circulated abroad. That's because violent clashes on the front lines are more likely to become news.

But the peaceful rallies taking place in residential neighborhoods better reflect the true nature of the movement that has spread throughout Hong Kong. Masses of black swans, which are not supposed to exist, are flocking to these districts.

As for the gray rhinos, they are showing up as young combative protesters who appear in the evening and sometimes go on rampages. They also charge at police.

Hong Kong's black swans and gray rhinos are coexisting. They struggle in their own ways and with distinct philosophies. Aware of each other's roles, they move as a loose throng.

This loosely resembles a Mao Zedong-style "people's war" that the party operated before the foundation of the People's Republic of China in 1949. The concept was to maintain the support of the population and to draw the enemy deep into the countryside where the communists would have an advantage.

The party's forces initially did not have many members. But they never hurt ordinary people. And coupling professional soldiers with regular people was at the heart of the "people's war" theory. The Chinese flag is raised by People's Liberation Army soldiers at the handover ceremony on July 1, 1997 in Hong Kong. China regained sovereignty of Hong Kong after 156 years of British colonial rule.   © Reuters

The prolonged "people's war" that is now continuing in Hong Kong is a battle over "one country, two systems." Put into place in 1997, when the former British colony was handed over to China, the formula was the result of paramount leader Deng Xiaoping's pragmatism.

Deng knew China lagged in economic development and thus allowed Hong Kong and Macao to retain their own economic and administrative systems. The allowance was also made out of the recognition that the free Western world's political and economic systems were superior.

But with the advent of the Xi Jinping era, China began to strongly believe that the "Chinese model" is superior to Western democracies. This perception has made it less necessary for China to respect the "one country, two systems" policy as strictly as it once did.

The "people's war" now playing out in Hong Kong is a result of a major political turnaround that Xi engineered after taking the party's helm in 2012.

Xi seeks to become a great national leader on a par with founding father Mao. But his hastiness is intensifying frictions in China's relations with Hong Kong and the U.S.

This has drawn a backlash from Hong Kongers. "Such youths are exactly 'the proletariat' in Marxism that formed the main part of past revolutions," said Ernie Chow, a 23-year-old former president of the student union at the Chinese University of Hong Kong, where protest activities are brisk.

Young Hong Kong demonstrators calling for freedom could not position themselves further from Marxism and the Chinese Communist Party. But one cannot talk about the party without reflecting on its association with demonstrations.

A hundred years ago, in 1919, the May Fourth Movement spread across China from Beijing's Tiananmen Square.

Students protested against the Chinese government's weak response to the Treaty of Versailles after World War I. They stood under the banners of anti-imperialism and anti-Japan to advocate for patriotism, democracy and the promotion of science and technology.

The political trend fostered by the May Fourth Movement led to the establishment of the Chinese Communist Party in 1921.

The party earlier this year held a massive event to commemorate the centenary of the May Fourth Movement. But what was stressed there was an argument that "today's patriotism means listening to the party's voices and following them." A yellow helmet has been placed on the head of a statue some people in Hong Kong have created as a symbol for a more democratic future, while Beijingers are again celebrating their past and Mao Zedong. (Source photos by Getty Images)

Hong Kongers' struggle for a more democratic future comes in contrast to how Beijingers this year are remembering 1949.

In the Chinese capital, a new statue of Mao was built to celebrate the 70th anniversary of the nation's founding. People with smiles on their faces and national flags in their hands have been posing in front of it for commemorative photos.

During the Deng era, Mao statues were torn down. In this new era, however, Mao and his reputation are undergoing a revival, if not a rehabilitation.

In Hong Kong, a pro-democracy statue called "Lady Liberty" wore a yellow helmet, a symbol of residents' modern struggle, when it stood in front of the Chinese University of Hong Kong.

The statue seems to have been inspired by French Romantic painter Eugene Delacroix's "Liberty Leading the People," a work commemorating the July Revolution of 1830, which toppled King Charles X of France.

While the statue remained in front of the school, students would gather in front of it to enthusiastically sing "Glory to Hong Kong," a recently written anthem calling for freedom.

Today's Beijing and Hong Kong are a study in contrasts that future historians will no doubt puzzle over.