Buildings are seen along the Songhua River in Harbin, in northeastern China.   © Reuters
FT Confidential Research

Companies controlled by Chinese local governments have avoided defaulting on their bonds so far. They will not continue to be so lucky.

Officials are taking a regulatory ax to the implicit support that has allowed hundreds of local government financing vehicles, or LGFVs, to stagger on. Rising interest rates and a slowing housing market are compounding their funding problems, and some local governments may even be laying the groundwork for a market failure by admitting to falsifying economic data.

As the financing environment for these companies becomes squeezed, the economic impact will be felt in weaker infrastructure activity and an associated drag on Chinese economic growth in 2018.

The central government's challenge will be to contain the fallout from an eventual bond default by one of these companies.

Originally set up to bypass restrictions on direct borrowing by local governments, LGFVs have been an important driver of infrastructure investment, but also of corporate indebtedness. Until recently, the central government took an erratic approach to reining in these companies -- target-obsessed bureaucrats appreciated their ability to deliver growth when the economy flagged.

But the leadership in Beijing has changed and so have official attitudes toward local government debt. As the need to control financial risk has moved up the government's priority list, the policy environment has become hostile. On paper, a flurry of new regulations outlines the parameters of local government borrowing, clarifying the scope of their liabilities as well as their legal responsibility for LGFVs and their 7.1 trillion yuan ($1.12 trillion) in bonds outstanding(see below).

However, their real-world impact has been that investors are pricing credit risk more carefully; the spread of LGFV bond yields over those issued by the central government has widened sharply, indicating that investors in these bonds no longer assume the blanket backing of the state. LGFV bonds escaped default during the past year thanks in part to a better-than-expected property market. Land sales accounted for 26.2% of local government income in 2017 -- the biggest proportion since 2013 -- while bubbling property markets helped push their total fiscal intake over the year to a record high. But housing markets are slowing, and this will erode their ability to service debt in 2018. Bonds worth 1.4 trillion yuan are set to mature this year, and these companies will struggle to refinance in an environment of rising rates. Our analysis does not include bonds issued by state-owned companies that have less explicit links to local governments but which are assumed to be backed by them. 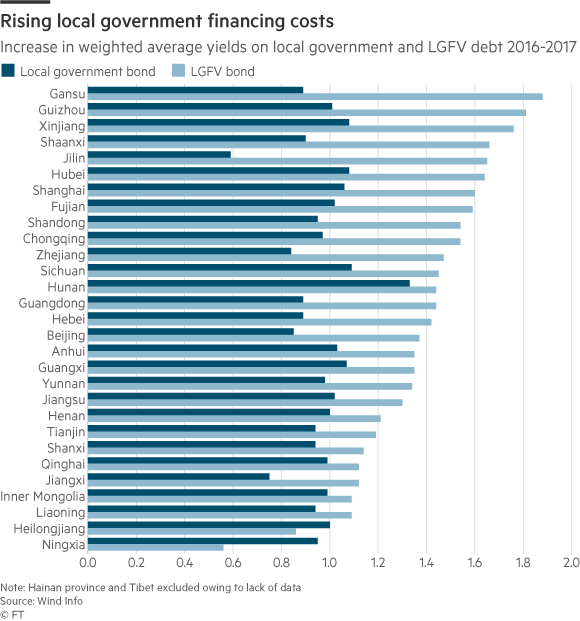 As maturity pressures have mounted, net bond financing by local governments -- bonds issued directly and via LGFVs minus those maturing -- shrank 66.5% to 473.9 billion yuan in 2017. Issuers are being charged more to borrow for shorter periods -- around half of the 7.1 trillion yuan in LGFV bonds outstanding will mature within the next three years. A Chinese local government bond default is highly unlikely, but a default by a company controlled by a Chinese local government is not. However, some local governments are faring better than others. The economic powerhouses of Beijing, Shanghai and Guangdong paid an average 4.83% on their bonds last year while those of Heilongjiang, Jilin and Liaoning -- which make up the slower-growing northeastern rust belt - all paid over 6%. At 2.3 trillion yuan, the Jiangsu local government and its 750 LGFVs owe the most to bond investors but paid less than the average among China's issuing authorities last year. 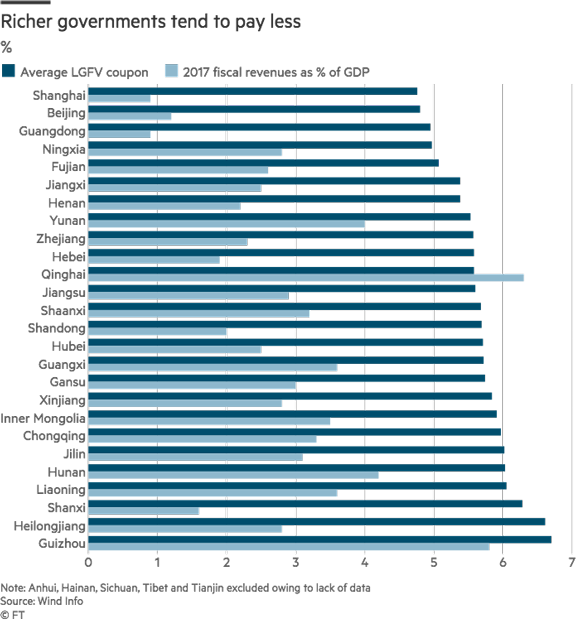 Mounting financing pressures could motivate local governments to admit that their economic data have been falsified. Doing so is unusual for Chinese local officials, who have traditionally been inclined, and politically motivated, to send only the most flattering numbers to Beijing. However, three local governments have already come clean, and more could follow, to lay the groundwork for defaulting on bonds that were sold based on inflated revenue and growth numbers.

Authorities in parts of Yunnan, Hunan and Jilin provinces, as well as Chongqing, have been accused by central government auditors and corruption investigators of inflating fiscal revenues, and more provincial-level local governments are likely to come forward, with some statements possibly timed to prepare the market for defaults. After all, the financial positions of China's local authorities are not improving; at the end of 2016, only six of the 31 local authorities -- Fujian, Jiangsu, Zhejiang, Beijing, Shanghai and Guangdong -- reported fiscal surpluses.

It is important to remember that a default in the Chinese financial system does not usually mean investor losses. Some form of bailout is still the rule thanks to official intervention, as happened when a Yunnan Province LGFV failed to make payments on trust loans at the end of last year. The leadership appears intent on breaking the implicit guarantee that underpins Chinese asset prices, but also wants economic and financial system stability.

These conflicting goals will be challenged when an LGFV fails to make its bond interest payments on time.

On Feb. 12, a notice from the National Development and Reform Commission said bond issuers must explicitly state they are not adding to local government debt, or seeking or accepting any guarantees from local governments.

On Jan. 18, a notice from the China Insurance Regulatory Commission and the Ministry of Finance, said insurers were banned from offering illegal financing services to local governments or LGFVs.

On Jan. 5, the China Securities Regulatory Commission announced rules to control entrusted loans by commercial banks amid growing concern that banks were using them to shift debt off their balance sheets and to circumvent curbs on lending to industries such as real estate and LGFVs.

On Dec. 23, 2017, the National People's Congress, China's legislative body, heard a report from the National Audit Office which disclosed that 25.4 billion yuan in illegal local government debt was "terminated or amended," and that resolution procedures were under way on another 28.4 billion yuan. At the same hearing, the Ministry of Finance said local governments and financial institutions should give up on the "illusion" that the central government will bail them out.

Circular 92 (announced Nov. 10, 2017): The Ministry of Finance set out stricter criteria for new public-private partnership projects, prohibiting local governments from offering guaranteed minimum returns on private investments, and from providing guarantees for the repayment of debt assumed by public-private partnership projects. This document also requires local authorities to scrap unqualified projects or to remove them from PPP structures by the end of March.