Strapped consumers struggle to make payments and get new loans Consumer borrowing is accelerating significantly in Thailand and around a quarter of consumers are having trouble making repayments on their debts, with credit cards and car loans the main areas of concern, according to an FT Confidential Research survey.

Thailand has the second-largest household debt burden among ASEAN economies, just behind Malaysia, which faces similar structural challenges. Relative to GDP, both countries have higher consumer borrowing levels than far-more-developed Singapore, and are well above the average level of G-20 nations, according to the Bank of International Settlements.

FTCR's latest survey shows that the high level of Thai household debt, which has been masked by the country's recent economic rebound, will hold back growth by crimping consumption.

In the first quarter of this year, seasonally adjusted Thai household debt remained stuck at 77.7% of gross domestic product, the first time in two years that consumer borrowing has not contracted in relation to the wider economy. This is particularly noteworthy because Thailand's GDP rose 4.9% in this period, the fastest growth in five years. The economy kept its momentum in the second quarter, with the GDP figure expanding 4.6% year-on-year. 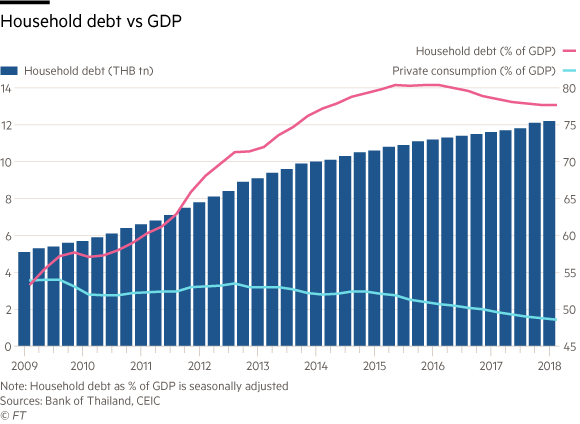 Thailand's economic rebound has been driven largely by an export recovery and thriving tourism. But consumer loan growth has increased since mid-2017, and has sped up in the past few quarters, a trend FTCR predicted last year. 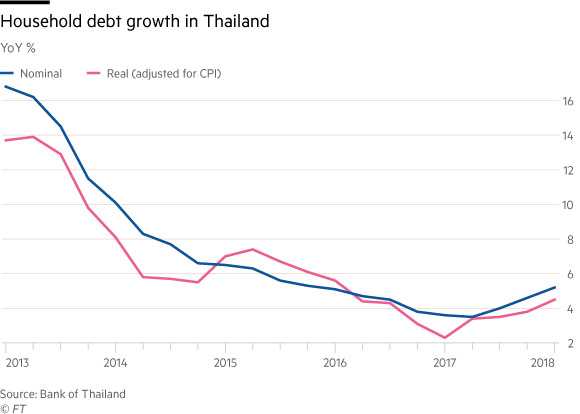 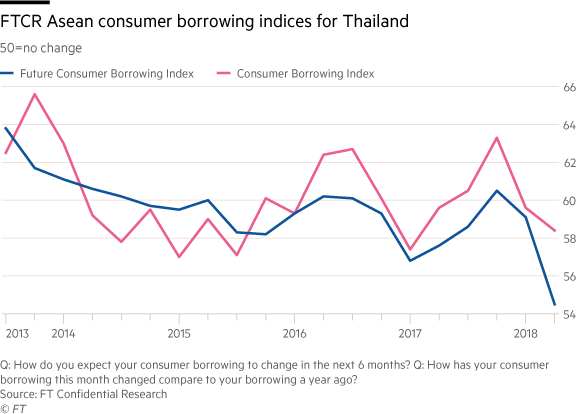 High household debt restricts consumption because it limits additional borrowing (as overleveraged consumers fail to qualify for more credit) and forces individuals to devote larger portions of their income to debt service rather than to new purchases.

While delinquencies remain low, FTCR data indicate that many Thais have difficulty servicing their debts. Over 80% of our 1,000 respondents report having at least one loan or credit account and, of these, about a third stated that they had trouble making repayments. They are also spending large portions of their income to service existing debts. Close to half of the same set of respondents said that they must divert at least 30% of their monthly income to payments, and 22% use up more than half their income. Even with so many in debt, about two-thirds of all 1,000 respondents have applied for a new loan in the past 12 months. Of these, 37% were approved for the full amount, while 48% were denied a loan entirely.

Furthermore, relatively few respondents have home mortgages (34%) or business loans (8%), which are arguably positive for household finances in the long term. But 55% have outstanding credit card balances, 34% have financed vehicles and 24% have unsecured personal loans. Some 11% admit to borrowing from loan sharks. The growth of vehicle loans, personal loans and credit cards has accelerated for several quarters, while home loan growth has not. Vehicle loans have rapidly expanded as cars purchased during a tax rebate scheme for first cars in 2012-13 have begun to be replaced. 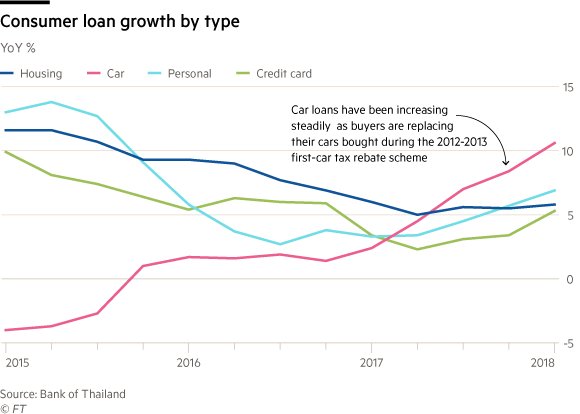 While household debt will continue to dampen growth for the foreseeable future, there is currently no systemic risk to the Thai banking sector, or danger of a consumer loan bubble. Non-performing-loans (NPLs) remain low, averaging 2.8% across all consumer loan segments. As reflected by the high rejection rate among borrowers in our survey, Thai banks have increased borrowing requirements in recent years, and the Bank of Thailand continues to monitor consumer debt levels closely.

However nonperforming vehicle loans, presently much lower than for the other categories, are likely to rise in the next few years because of the rapid growth of this segment. In the first half of 2018, new car sales jumped 19.3% year-on-year as the Thai vehicle market continued to recover from the distorting impact of the first-car tax rebate measure.