Two decades after the privatization of China's housing market, the government is moving cautiously toward imposing a property tax to instill order and combat a potentially destabilizing increase in debt. Beijing's squeamishness is understandable; over a fifth of real estate investors would consider selling if a tax were levied, a survey by FT Confidential Research has found. Even after years of dragging their heels, the authorities are vacillating. There was speculation that legislation for a tax could be drafted as early as this year. Premier Li Keqiang's 2018 work report, a broad statement of policy intentions, said the government would "prudently advance legislation on real estate tax." However, it is not a legislative priority for the National People's Congress, the body charged with drawing up the tax, possibly out of concern for its impact on the economy.

The tax could be based on the appraisal value of a property and is considered a solution to the skewed incentives that underpin China's housing markets. But the government is sensitive to the risk of a sell-off. At least one financial commentator has warned that a tax would cause the "Minsky moment" -- when investor exuberance gives way to a sudden and sharp drop in asset prices -- that Zhou Xiaochuan, former governor of the People's Bank of China, warned of in his final months in office.

In theory, a property tax would neutralize some of the speculation that has driven prices sharply higher in many cities by raising the cost of owning unoccupied housing. With limited investment options and a closed capital account, China's affinity with housing as a store of value remains strong. Since the end of 2015, when the government loosened purchase restrictions to shore up economic growth, home ownership has surged; 35.7% of respondents living in first-tier cities said their households owned more than one property. About 70% of households still believe prices will keep rising, even though local governments have spent 18 months imposing tougher purchase restrictions to cool expectations. Our data have also tracked a gradual increase in vacant properties across all city tiers since the end of 2015. Among homeowners surveyed by FT Confidential Research, 35.1% said they owned at least one property that is empty, rising to 40.6% among those in first-tier cities, where prices have risen fastest. The China Household Finance Survey, which is run from the Southwestern University of Finance and Economics in Chengdu, estimates that 50 million housing units sit empty.

The government believes a tax would also help nurture the private rental market because some investors would prefer to let their properties to tenants to offset the tax rather than sell. However, China's rental market has not kept up with house prices. E-House China R&D Institute, a research company, estimated at the end of last year that yields across 50 Chinese cities averaged just 2.6% versus 3% in London, 4.7% in New York and 4.3% in Tokyo. Centaline, a property agency, estimates yields are well below 2% in China's first-tier cities, where demand for rental accommodation should be strongest. 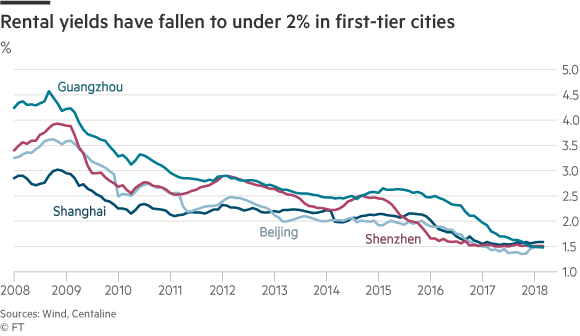 Furthermore, vacant Chinese homes are typically little more than bare shells, and renting them out would require steep redecoration costs. Owners, particularly in smaller cities, may be reluctant to take tenants so long as house prices keep rising. "My apartments will continue to be a store of value," said Wuhan resident Du Decheng, who owns four apartments in a city where prices have officially risen 50% over the past five years. "I won't sell just because of a tax that's a fraction of the value that the properties have gained."

Shanghai and Chongqing introduced property taxes in 2011, charging from 0.4% up to 1.2% a year based on a host of conditions including size, value and the status of the homeowner, which sharply narrowed the tax base. The result is that 3.5% of Shanghai's and 2.9% of Chongqing's tax revenues came from property last year. In contrast, Singapore's property tax has averaged 7.3% of total tax revenue over the past decade.

Just 40% of respondents to our survey agreed or strongly agreed that a tax should be applied to all property, regardless of whether it is vacant or occupied, while 72.5% said low income groups should be exempt. Resistance to the tax appears strongest in third-tier and smaller cities, which have seen prices and ownership levels rising later in this cycle than in more developed markets such as Beijing and Shanghai. Asked whether the tax should target those buying additional homes as investments, 67.5% of first-tier city residents agreed or agreed strongly versus 56.9% of those in third-tier cities. 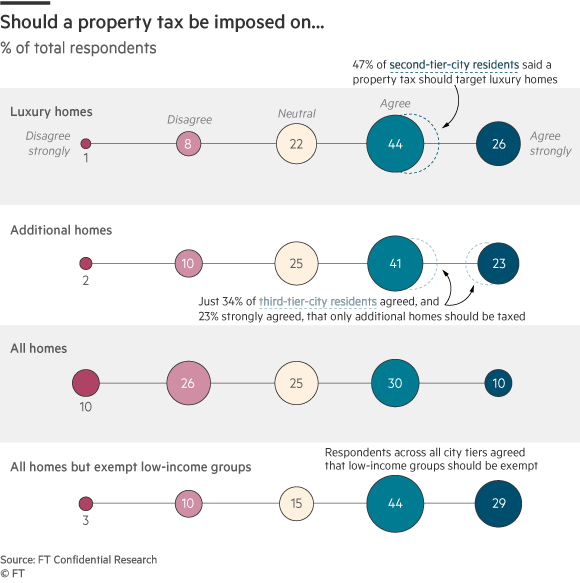 Although the legislation will be drafted in the central government, local governments are likely to be given considerable flexibility in levying taxes. Property taxes would theoretically provide local governments with a steady source of income, rather than having to rely on sales of dwindling land holdings and inadequate transfers from Beijing. However, with some markets more overheated than others, enforcement will probably be gradual, gentle and largely insufficient in the short term to close the fiscal gap.