Didi dominates ride-hailing in China but could be vulnerable

Having outspent Uber in the car-booking wars of 2015 and 2016, Didi Chuxing could have been forgiven for thinking that the road ahead was clear. However, FTCR's latest consumer survey highlights the threat posed by local rival Meituan Dianping, one of China's most valuable tech unicorns backed by Tencent Holdings. Although tighter regulation may slow the expansion of the online services giant into car-booking, Didi should not be complacent.

Nationwide, Didi enjoys a commanding market share - about 90 percent, according to data service company Jiguang. Our survey of 1,000 urban consumers also shows Didi's many competitors far behind in the popularity stakes. However, a city-by-city analysis presents a more nuanced picture, suggesting Didi's position is not unassailable. 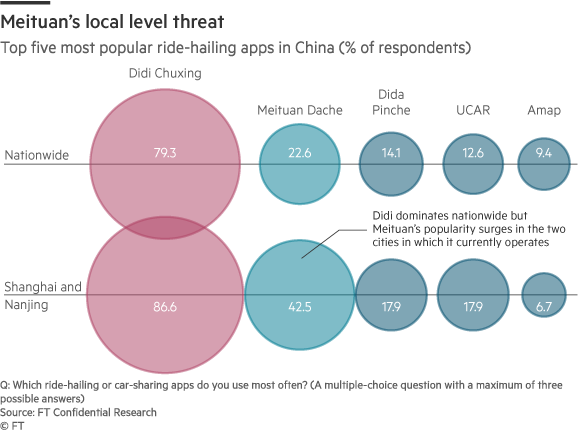 Just months after going live in Nanjing and Shanghai, Meituan Dianping has rapidly built a sizeable following in those cities with its Meituan Dache service, helped by its ubiquity in food delivery. Meituan started as China's answer to Groupon, a platform that pools purchasing power to obtain discounts, and then merged with an online food review platform. Now it is reportedly seeking to raise more than $4bn in an initial public offering in Hong Kong.

It may be tempting to predict a repeat of the car-booking wars, in which Didi and Uber burned billions of dollars to win over drivers and consumers with subsidies and heavy discounting. But one must factor in the regulatory roadblocks that have since been erected by government agencies in response to protectionist complaints from local taxi companies and safety concerns among consumers.

The murder of a 21-year-old flight attendant in Zhengzhou in May, allegedly by her Didi driver, has been a catalyst for consumers demanding that the company tighten up on safety. Consumers said safety was their most important consideration in choosing which car-booking app to use, with the availability of promotional offers in fourth place. This regulatory tightening is hindering Meituan's expansion plans. It has yet to receive a permit to operate in its home city of Beijing, and was rebuked by Shanghai authorities shortly after launching there in March for offering promotions.

Meituan's IPO prospectus acknowledges the risks of piling into new business areas against entrenched competition, as well as those posed by tighter regulations. But the company sees car-booking as complementary to its current offerings, hoping customers will read the review, book the restaurant and then arrange the transport, all from one app. Meituan lost nearly Rmb19bn ($2.85bn) last year, while driver costs rose to Rmb293m from nothing. These costs are likely to rise further. However, provided it can navigate the shifting regulatory environment, Meituan's enlarged cash pile and brand recognition mean it is likely to challenge Didi in other cities.