Chinese consumers are responding to a slowing economy by saving more and putting less money into risky assets, FT Confidential Research data show. Although the government is cutting income tax to boost consumption, the extra take-home pay is likely to wind up on deposit as consumers become more nervous.

FTCR data suggest the government should not expect consumers to help support the economy. Even if growth can be stabilized by stoking investment activity, rising household debt and the likelihood of a prolonged and intensifying tussle with the U.S. mean consumers will remain wary.

Readings of Chinese consumer sentiment are weakening following a record run. In September, fewer consumers said they intended to increase discretionary spending in the coming six months, dragging our measure of discretionary spending expectations to a 17-month low. Although they said their income growth rose, consumers are suffering a fading wealth effect - our gauge of how they appraise their financial situation is at a near two-year low, having fallen even more sharply than after the stock market crash of 2015. 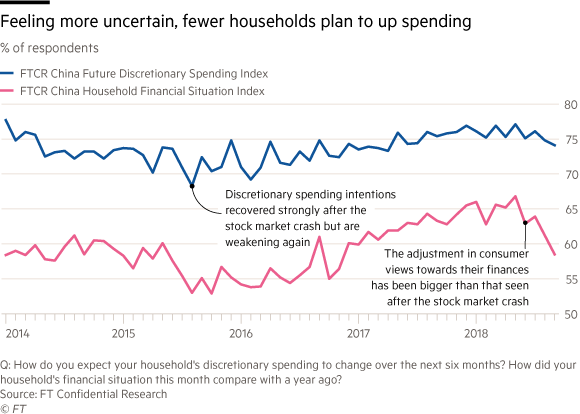 A more nervous household sector is also reflected in an increasing propensity to save. Each month we survey consumers' inclination to save, invest or spend, given prevailing interest rates (the series is based on a quarterly People's Bank of China survey of depositors). Since the end of the first half, there has been a notable shift among consumers in favor of saving over investing. The inclination among households to consume, which dipped at the end of the first quarter, has since recovered but remains relatively flat. This new-found desire to save more reflects broad concerns about the economy, but the fall in the number of consumers who would prefer to invest also shows the toll of flameouts in various asset classes as well as falling interest rates. Casualties include peer-to-peer lending, an industry that has shrunk by a third in just four months after a series of scandals and protests, as well as the stock market, which has fallen as much as 25 percent this year. Seemingly safe investment alternatives no longer look so attractive compared with deposit rates. Yu'E Bao, the giant money fund distributed by Alibaba, now pays an annualized 2.8 percent, versus more than 4 percent at the start of this year. Our latest monthly assessment of house price expectations also shows that bullish views on this all-important asset class are finally starting to shift, as sales slacken in the face of government intransigence over policy.

Evidence of actual consumer spending behavior is mixed. The monthly retail sales series produced by the National Bureau of Statistics suggests growth is gradually slowing, albeit from an ever-larger base. Falling car sales carry responsibility for this decline, although these reflect the withdrawal of government tax incentives as well as the fact that buying second hand carries less social stigma than before among Chinese consumers; used car sales are up 13 percent so far this year. Nonetheless, quarterly measures of household disposable income and consumption growth both show weaker growth because of the economy's structural slowing.

The government recently agreed to cut personal income tax as part of its longer-term overhaul of China's tax regime. This includes raising the earnings threshold above which people start paying income tax to 5,000 yuan ($720) per month from 3,500 yuan, although those earning between 15,000 and 25,000 yuan will see the biggest benefit as a percentage of their monthly salaries. However, these are a very small minority of Chinese earners; the government estimates that even in affluent eastern areas last year, the average wage for non-private companies was 7,067 yuan a month. Those earning more than the threshold will take home an extra 192 yuan, according to our estimates. Transferring more wealth to Chinese households is an important part of the government's rebalancing plan. The finance ministry said recently that more changes were coming. However, the latest tax cuts may not mean increased spending because of prevailing uncertainty - particularly with upward pressure on prices.

The tax cuts are part of a relatively subdued policy response to a gradually slowing economy. They do not compare with 2015, when interest rates were slashed in a failed bid to prop up the stock market, and certainly not with 2008, when the authorities rolled out a giant stimulus program.

While the government has boosted fiscal spending to try to reverse falling infrastructure investment, the authorities will struggle to engineer a reversal without a wholesale retreat on efforts to clamp down on risky lending practices.

Given this, Chinese consumers may remain on edge and their spending may continue to suffer.