Chinese local government authorities, under pressure from Beijing to counter an economic slowdown, are likely to issue over 740 billion yuan of special bonds by the end of October to fund more infrastructure spending, on top of 2.1 trillion yuan in regular borrowing, FT Confidential Research indicates.

Under old rules, Chinese local governments were banned from directly running fiscal deficits so they instead set up companies to borrow indirectly from the bond market or from banks and non-bank institutions. Regulators were initially happy for these quasi-fiscal entities to help drive China’s investment boom but have become increasingly determined to rein them in as the country’s debt problems have grown.

Since 2014, Beijing has made stuttering efforts to clean up local government finances, finally permitting local authorities to issue bonds directly while trying to cut the illicit funding lifelines that have kept many local government financing vehicles (LGFVs) going. Officially, local governments owed 16.5 trillion yuan at the end of last year but their contingent liabilities, including debts owed by LGFVs, are thought to be much larger.

Local government financing vehicles appear now to have been given a break as the leadership tries to stabilize the economy, but regulators are still determined to kick away the supports as part of a broader clean-up of local government debt.

Ratings on a host of LGFVs were downgraded by international agencies in early September on expectations that the implicit support of local authorities would weaken. This followed a default last month that was seen as the first bond market failure by an LGFV. Technically, Sixth Agricultural State-owned Assets Management Co was not an LGFV. It was part of Xinjiang Production and Construction Corp, a giant military-industrial group also known as the bingtuan, which for a long time was the effective government of the restive northwestern region of Xinjiang.

Nonetheless, its failure on August 13 to pay principal and interest on a 500 million yuan ($73m) bond was treated as a harbinger for LGFV bonds, a 7.4 trillion yuan subset of China’s 81.2 trillion yuan bond market. After years of speculation, it looked as though a wave of LGFV defaults was about to begin.

But doing so is proving difficult at the local level. Even by the standards of China’s bond market, Sixth Agricultural stands out. Default notices usually trigger a scramble by local officials and bankers to ensure investors get paid and market stability is restored, but this generally takes time. In the case of Sixth Agricultural, bondholders were paid in full just two days after the default notice, while the company’s chairman was quickly detained by anti-corruption investigators, according to Caixin, a respected financial news and information service.

The chairman’s detention seemed intended to signal that the default was an isolated case of corruption and that the funds should keep flowing. As well they should: Xinjiang LGFVs typically pay about 60 basis points more than the average and Sixth Agricultural has another 1.5 billion yuan in bonds coming due before mid-March 2019. About 485.8 billion yuan in outstanding LGFV bonds are maturing in the current quarter alone, less than the second quarter’s record 543.6 billion yuan but far greater than the quarterly average of the previous two years. LGFVs have had increasing trouble tapping the bond market as default fears have risen. Average monthly net bond financing this year is about a third less than they were able to raise between 2014 and 2017. The struggle to refinance may continue in the coming weeks, less because of heightened concerns about defaults than because of the big additional local government bond sales to fund the infrastructure drive.

Steps have been taken to whet the appetites of banks, which are the big buyers. State banks have pledged to buy more while lenders reportedly no longer face restrictions in buying the local government bonds they underwrite.

However, while this risks LGFV issuers being marginalized in the bond market, the near-term likelihood of more defaults is small. Even if companies struggle to refinance in the bond market, policy treatment has changed with the economic slowdown and bank and non-bank lenders are being encouraged to offer support. The People’s Bank of China has also watered down collateral requirements for borrowing from its Medium-term Lending Facility. This has helped double A-rated LGFV bonds, which account for about 34% of total LGFV bond issuance and now yield less than similarly rated corporate bonds, suggesting that investors are pricing in less risk of LGFVs defaulting. (Chinese bond ratings are not comparable to their international equivalents; 96.8% of LGFVs are rated double A or higher.) 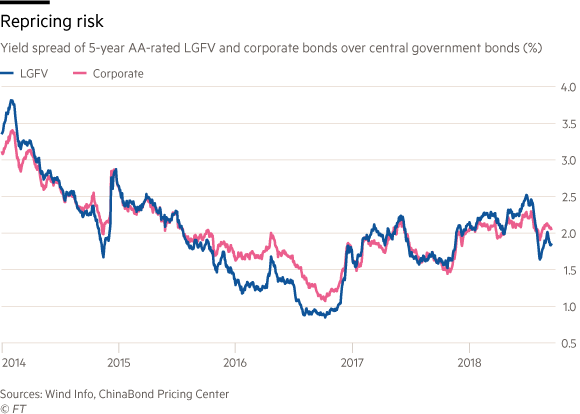 Yields on bonds rated double A minus, which were not covered by the PBoC measure, are continuing to rise but account for a fraction of rated issuance. The shift in attitudes toward LGFVs is reminiscent of 2015, when the government last backed down on attempts to cut them off in the face of slowing growth. But the mood has changed in the intervening years. The leadership has made tackling China’s debt problems a political priority — that has to mean reining in freewheeling local governments and their companies.