The development of consumer lending in China has hit a bump as the peer-to-peer industry falls foul of a regulatory clampdown, according to a survey by FT Confidential Research.

Of 66 peer-to-peer lending platforms surveyed by FTCR, 10 said they might close because of difficulties in meeting new compliance standards and in controlling an increase in bad loans. Among the platforms, which match lenders with borrowers online, more than 40% of those in second- and third-tier cities said business had fallen in the first quarter compared with the end of last year.

"The days of explosive growth are over," said Xie Ming, owner of Rongda Investment, a lending platform based in Chengdu, Sichuan Province.

Regulators were initially slow to respond to the industry's emergence, opening considerable scope for fraud. Ezubao, established in mid-2014, lasted less than 18 months before the state moved in to arrest its founders and declare it a Ponzi scheme. It took around 50 billion yuan from 900,000 investors.

But regulators are no longer behind the curve and this is no longer the Wild West of finance. China's reshuffled leadership has sanctioned a sweeping campaign to tackle financial risk, and rules governing P2P lenders are set to tighten further.

Industry portal Online Lending House estimates the number of platforms in operation has fallen by nearly half since the end of 2015, with 1,883 thought to be in operation. Investors have also drifted away; our monthly consumer survey has shown a gradual fall in the percentage of consumers willing to put their savings into such products. 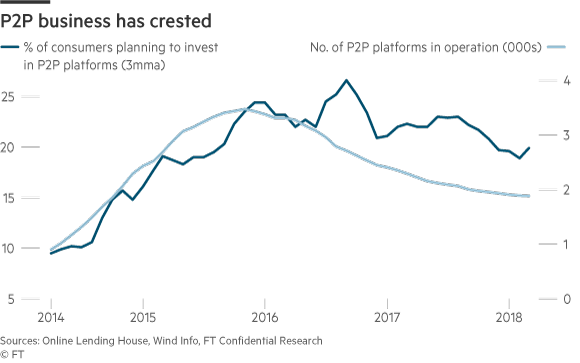 An analysis of data from 11 of the top platforms puts the average loan term since the start of this year at 144 days, or just under five months, while the average size of each loan was just under 150,000 yuan, reflecting the popularity of the platforms for securing car loans. Buying a car was the second most popular reason for borrowing after home renovation, while the third was tuition fees, our survey found. Just 30% of platforms said their customers were borrowing to buy a home, suggesting that a regulatory crackdown on illicit funding for buying real estate has been effective. P2P lending is a technological step up from private lenders, which have traditionally operated in the gray areas of the financial system to pool funding and extend loans at rates well above those charged by banks. The development of fintech means lending networks are no longer limited in reach. Tsinghua University estimates 75% of Chinese borrowers make less than 5,000 yuan a month. Xu Jianhua, a director at Jianxing Finance in Wuhan, said most of his clients had either reached their credit card limits or did not qualify for a bank loan. Our survey found lenders were charging individual borrowers a weighted average of 16.4%, including service fees, compared with the official one-year lending rate of 4.35%.

"Lending has taken off because income growth failed to catch up with consumption growth," Xu said. Platforms are struggling as the bill comes due on untrammeled subprime lending. Among those surveyed, 64% described their nonperforming consumer loan ratio as high, while 77% of those operating in second- and third-tier cities warned of elevated levels of bad debt. In the rush to expand, platforms have had to lower lending standards and are grappling with a rise in default rates that is pushing them toward failure, especially those in smaller cities. P2P loans outstanding grew 40% in March to just under 1.3 trillion yuan, although that was half as fast as the pace of growth a year ago. 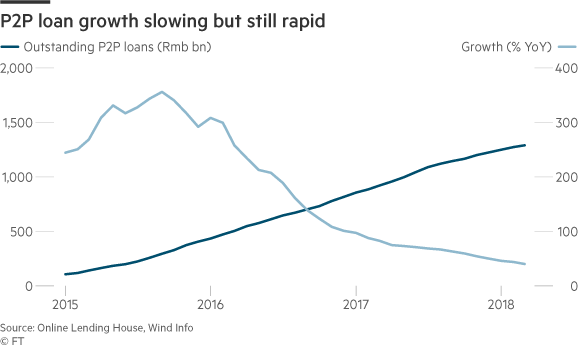 The People's Bank of China has data on just 480 million people, less than half of the country's working-age population. Reports that borrowers have been asked to submit nude photographs as collateral represent the extremes of a young industry struggling to contain credit risk.

The government has been building a regulatory framework to govern the industry since 2016. It has already capped borrowing limits and shut a secondary market in loans. Platforms have to file with local regulators, requiring financial disclosure that some will be unable to fulfill. This has already driven some out of the industry and more will follow. Among survey respondents, 73% believe the crackdown has negatively affected business. Most expect the slowdown to continue, with just 47% expecting conditions to improve by the end of the current quarter.

Companies are trying to comply with tighter operating rules. Rongda's Xie said loan approvals were now taking as much as 24 hours, up from less than two hours just six months ago. But the tightening has come too late for those that lent to borrowers such as Tianjin accountant Zhang Yan, who walked away from seven of the 12 online platforms that collectively supplied her 70,000 yuan last year to spend on online games.

"I don't owe that much to those small platforms," she said. "It'll cost too much for them to take legal action against me."