Vietnam is set to remain the fastest-growing major country in Southeast Asia this year, with consumers boosting spending as a robust economy lifts household incomes. The latest quarterly survey from FT Confidential Research shows Vietnamese consumer sentiment at a three-year high, but continued economic success depends on the government successfully managing its partial withdrawal from the economy and its relationship with a newly assertive China. Our survey of 5,000 consumers across Thailand, Indonesia, the Philippines, Malaysia and Vietnam found young Vietnamese among the most optimistic about their country's economic outlook, propelling the FTCR Vietnam Economic Sentiment Index to its highest level since the start of 2015. 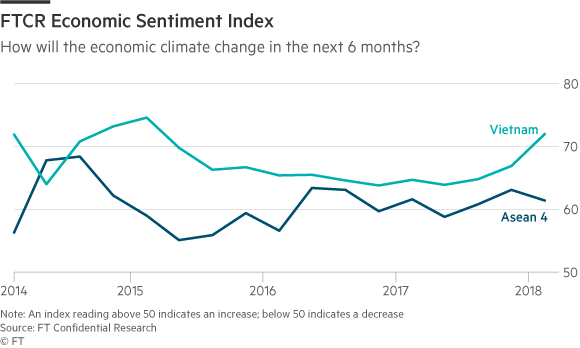 Optimism among Vietnamese -- they have been consistently upbeat on the country's economic prospects since we began our survey in 2013 -- stands in contrast to the persistent gloom of Malaysian consumers and the changeable expectations of their Thai neighbors.

Vietnam's economy grew 6.8% last year, exceeding the Philippine growth rate by a whisker, and the government is expecting a faster pace this year. The economy is supported by demographics, with Vietnam's dependency ratio -- a measure of the working age population relative to the young and elderly -- at a low 42.9%.

This leaves Vietnamese with more income for shopping. Discretionary spending in Vietnam rose fastest in the five ASEAN countries surveyed, according to our first quarter survey, while 49% of respondents said at the end of 2017 that they intended to increase their spending this year, more than any other group in the Asean-5. Foreign brands are responding; in the second half of last year, H&M, Costa Coffee and Dolce & Gabbana all opened their first stores in the country. 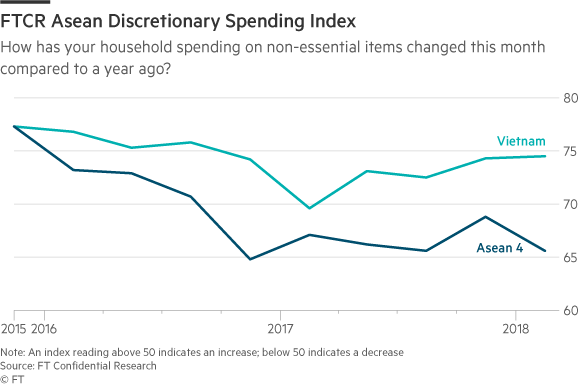 While retail sales in Vietnam rose nearly 11% last year to $129 billion, online shopping sales jumped 25%, a pace that the Vietnamese E-Commerce Association, an industry group, expects to be maintained until 2020. Regional firms such as Lazada may dominate online retail in Vietnam but domestic challengers such as Thegioididong and Sendo have emerged.

Car sales are expected to rebound from last year's dip, helped by the removal of duties on imports from other ASEAN countries. Sales rose 241% between 2012 and 2017 as motorbikes steadily gave way to cars, making congestion a new headache for Hanoi and Ho Chi Minh City. Vietnam is treading a path taken by many of its neighbors. A relatively large, young and cheap labor pool is drawing foreign investors and turning Vietnam into a regional manufacturing hub in competition with Malaysia, Thailand and Indonesia. Samsung is the largest foreign investor, having invested $17 billion since 2009. Last year, around half of all of Samsung's costlier smartphones passed through the hands of a Vietnamese worker before being shipped worldwide. More Vietnamese are expected to leave the countryside for the factories -- the share of agricultural labor in Malaysia is just 11.8% -- driving income levels higher. This industrialization is changing the profile of Vietnam's exports, leading to a growing concentration in high-value-added manufacturing, but also in services, away from low-value-added sectors such as textiles. Reform is key to Vietnam sustaining this growth. Moves to tackle inefficient state-owned enterprises are picking up under what the ruling Communist Party calls "equitization," a more politically acceptable term for privatization. A new body overseeing 30 of the largest state-owned companies, with total assets of $240 billion, is expected to begin operating this quarter, helping override some of the ministerial resistance that has dogged the government's privatization efforts. With the authorities incentivized to capitalize on strong investor sentiment, a healthy economy and soaring stock market valuations, we expect more stakes in state firms to be sold in the coming year.

Success is by no means assured. External and internal factors threaten to derail Vietnam's economic progress. Relations with China, Vietnam's largest source of imports and its second-largest export market, have not been easy. Vietnam shares widespread concern in Southeast Asia about becoming economically dependent on China, and geopolitical flare-ups heighten this anxiety. In 2014, the Vietnamese government was forced to quell domestic protests and soothe investor anxieties after Chinese oil drilling off the Paracel Islands triggered nationwide riots. Relations between Beijing and Hanoi are again on the mend but the scope for tension is growing as Chinese foreign policy becomes more assertive and as the U.S. turns inward.

The more tangible challenge is that of an aging society. Vietnam's median age of 31.3 is relatively high given where it is on the development curve. It will not be long before Vietnam's labor force begins shrinking, dragging on consumption and economic growth and forcing discussion, which has already begun elsewhere in the region, about how to counter this problem.